Lebois & Co. could have been just another Kickstarter brand launching a new campaign. But instead, it chose to do something else… It chose to go one step further, and this isn’t something we’re going to complain about – at all!  It shows how impressive things can be done with a top-grade Sellita and sheer willpower. The watch is named the Lebois & Co. Venturist Chronometer and it comes with a drastic chronometer certificate.

Earlier this year (in May, to be exact), we already announced this quite ambitious watch by microbrand Lebois & Co. It is named the Venturist, and it has gone through a lot of testing in the past few months. But today marks an important step. Dutch entrepreneur and founder of Lebois & Co., Tom van Wijlick, announces today that the final prototype is ready for production, and has been tested following the Timelab Observatoire Chronométrique+ protocol.

Now, this certification is not something to be taken lightly. Obviously, COSC is the more renowned Swiss independent testing institute, but Timelab works with even tighter protocols. It is a Swiss private-law foundation and was founded in 2008. It actually replaced the local office of COSC in Geneva. It also took over the educational duties of the Geneva watchmaking school. But most importantly, it has been responsible for the “Poinçon de Genève” certification. Timelab employs twenty sworn-in individuals working under strict neutrality and independence. The same is required for the expert members of the technical committees responsible for the rigorous criteria definition applied to the certification offers. 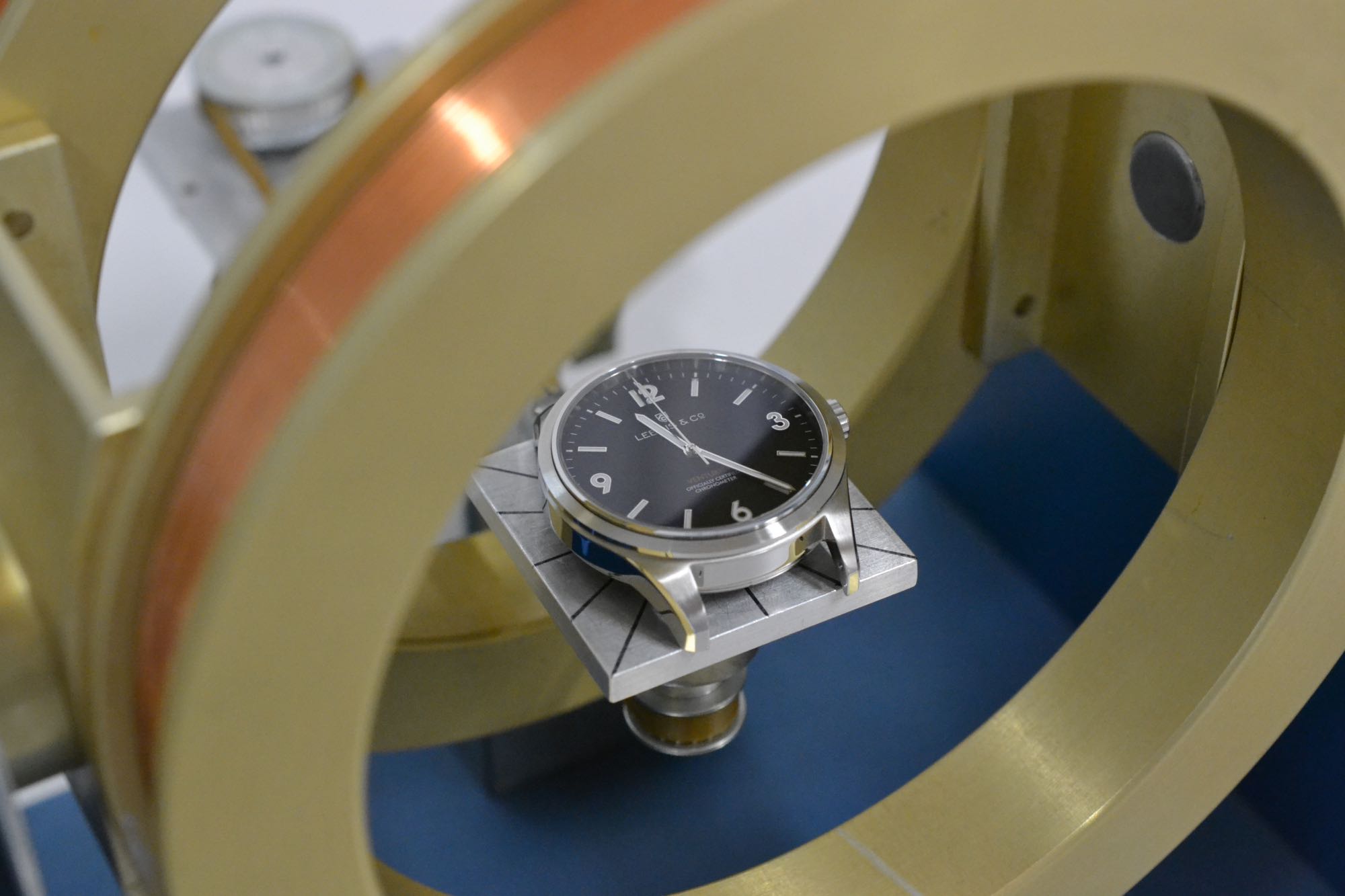 Anti-magnetism test performed on the Venturist 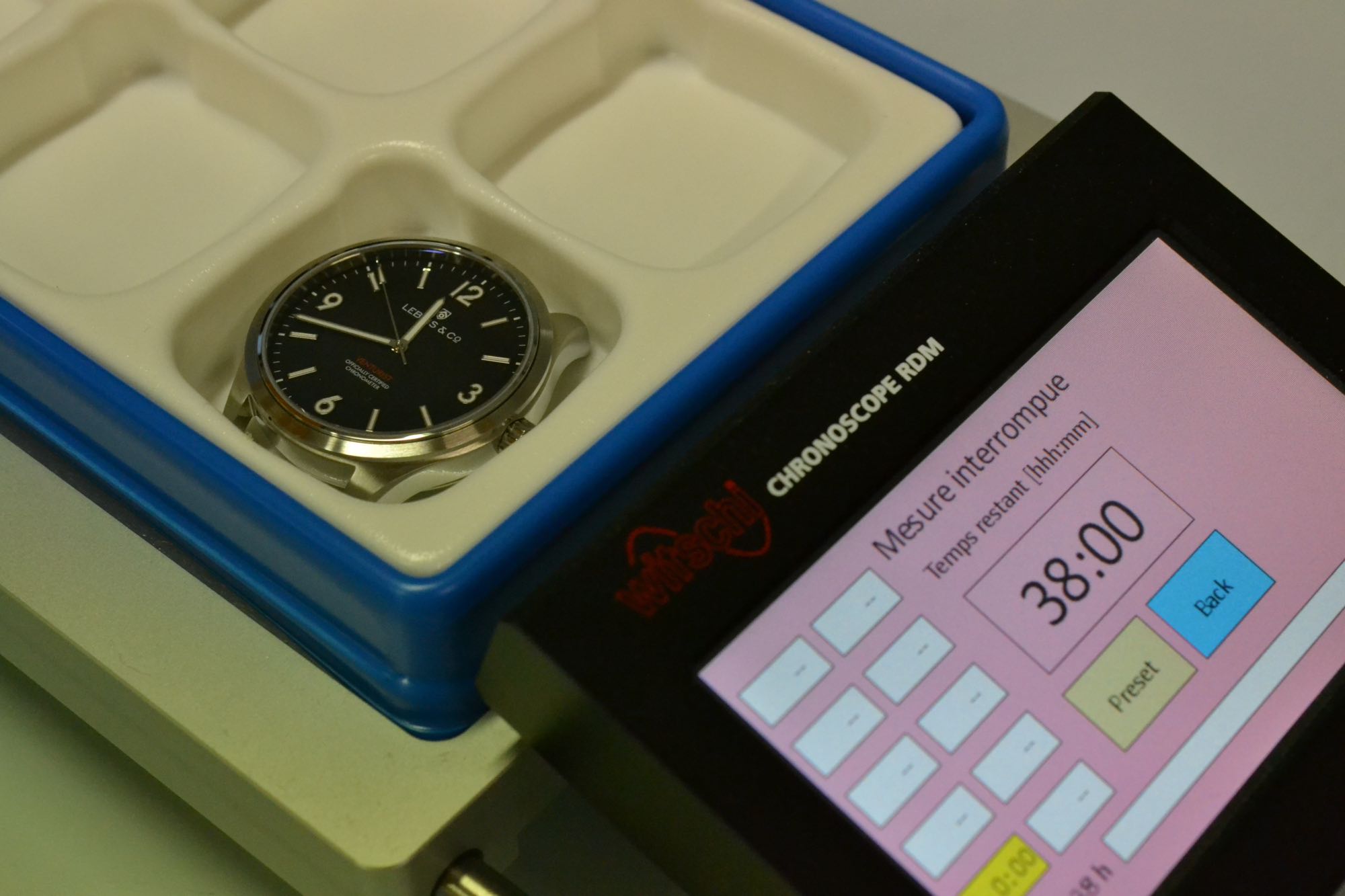 Furthermore, it has the ability to give watches its ISO/CEI 3159 standard Chronometer certification (-4 to +6 sec seconds of variation per day), but with a few differences from the COSC. With Timelab, for example, the guarantee covers the finished and cased watch. It also extends to other reliability aspects, such as water-resistance (ISO 22810), magnetic-resistance (ISO 764) and power reserve. All of this also includes testing “real-life” conditions, simulating wrist movements. 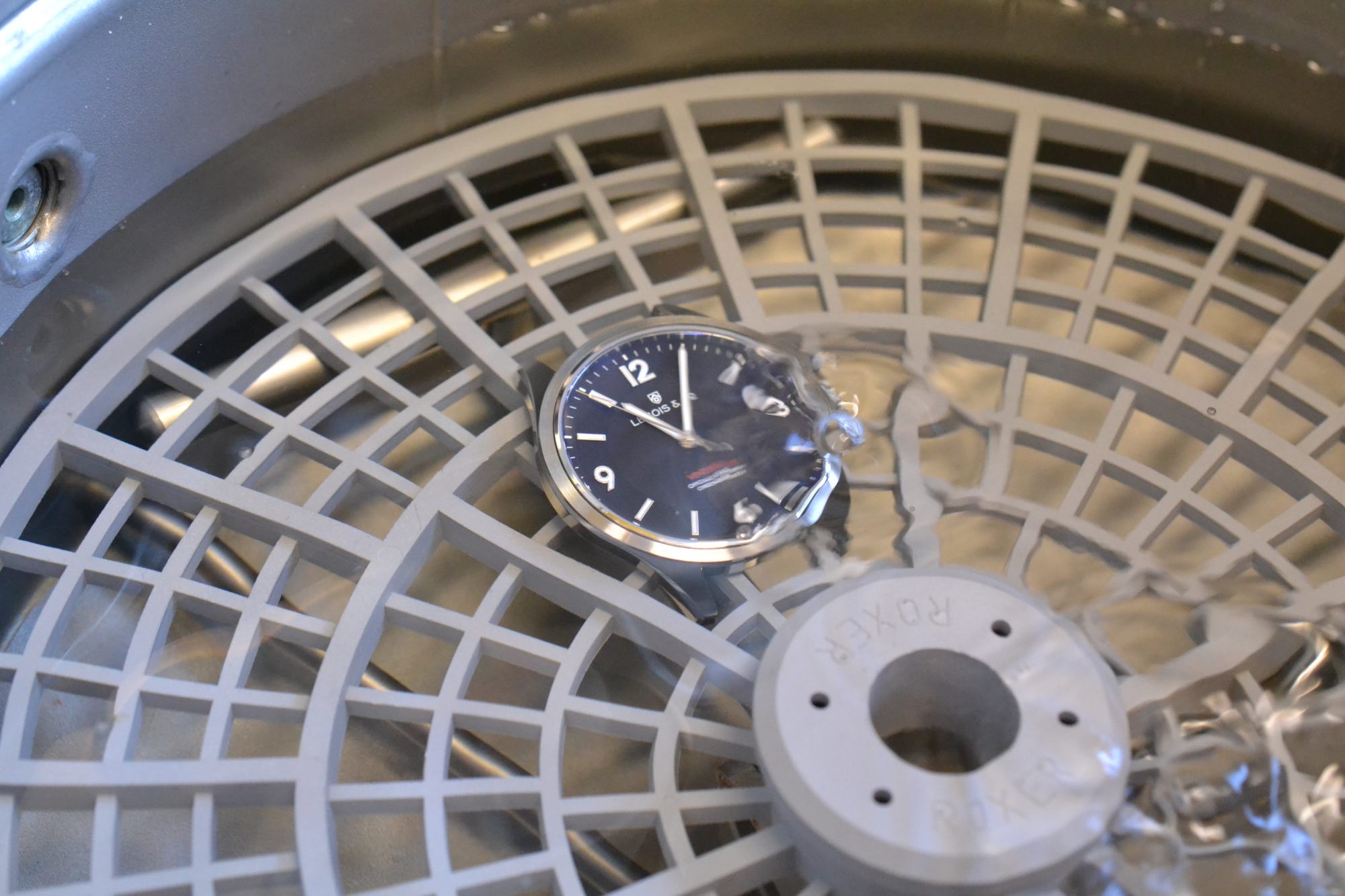 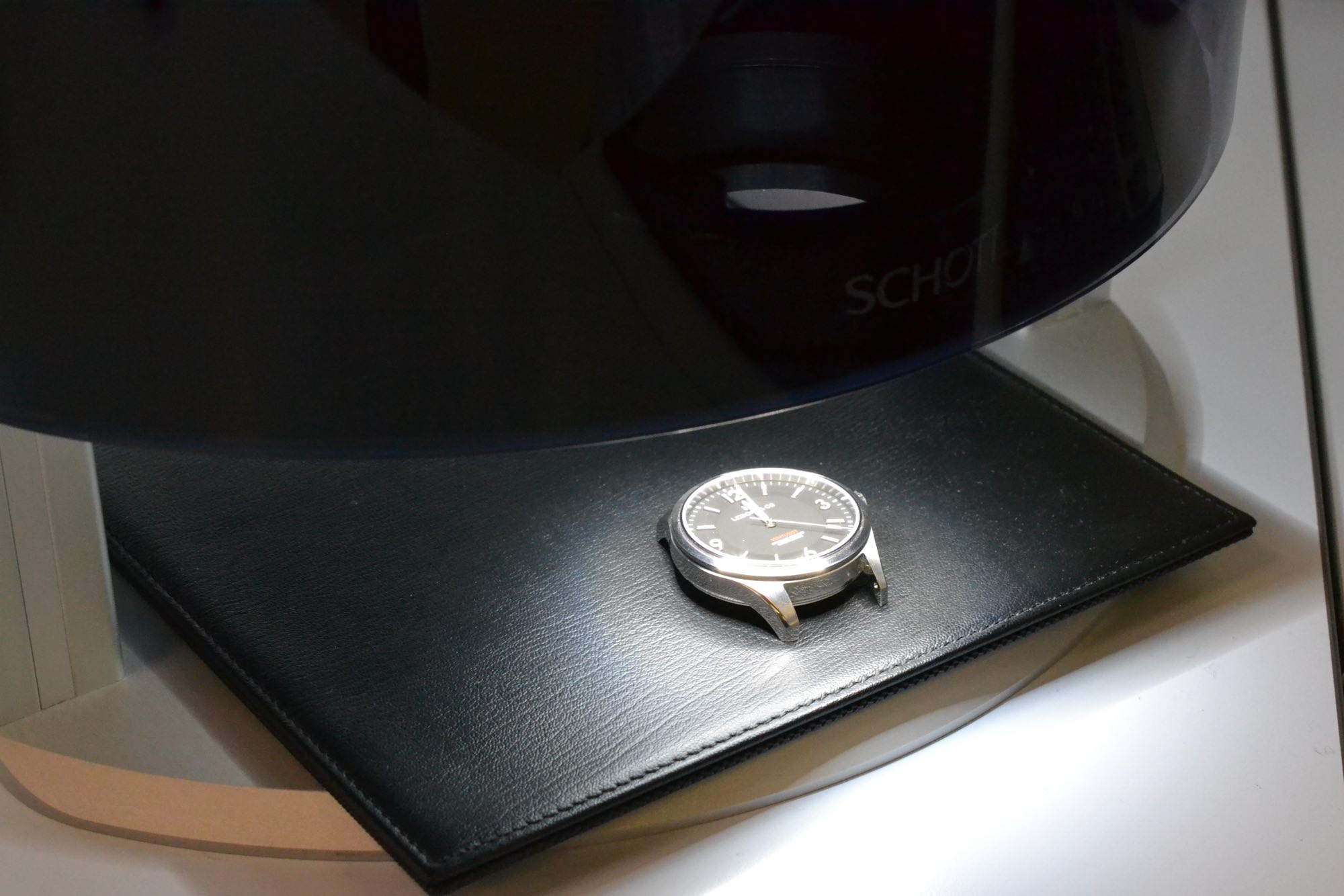 Tom van Wijlick emphasizes the fact that the certification was quite an adventure to obtain, but he’s very proud to have it now. “This really differentiates us from quite a lot of brands out there“, he says. “Especially as a microbrand, I think it is very important to assure your quality and accuracy by an independent institution.”

The story of how Van Wijlick finally got this certification is quite an interesting story in itself. Practically no other watch company uses it yet, but that will undoubtedly change in the near future. Asked what was the biggest hurdle he had to take for the certification, Van Wijlick admits that “practically the entire process was one big hurdle. To get this done for such a small brand with small budgets is just difficult. Eventually, it was a huge help for me that two investors believed in this project.”

Van Wijlick can’t put a price tag on the actual costs for the certification but does say that “it certainly has its price. The watch had to be tested for 21 days in Geneva. But I’m honestly convinced that it is definitely worth it. The proof, the reassurance, and the certainty that this certification offers is a huge premium. Quality has its price, and testing that quality is part of that price.“ 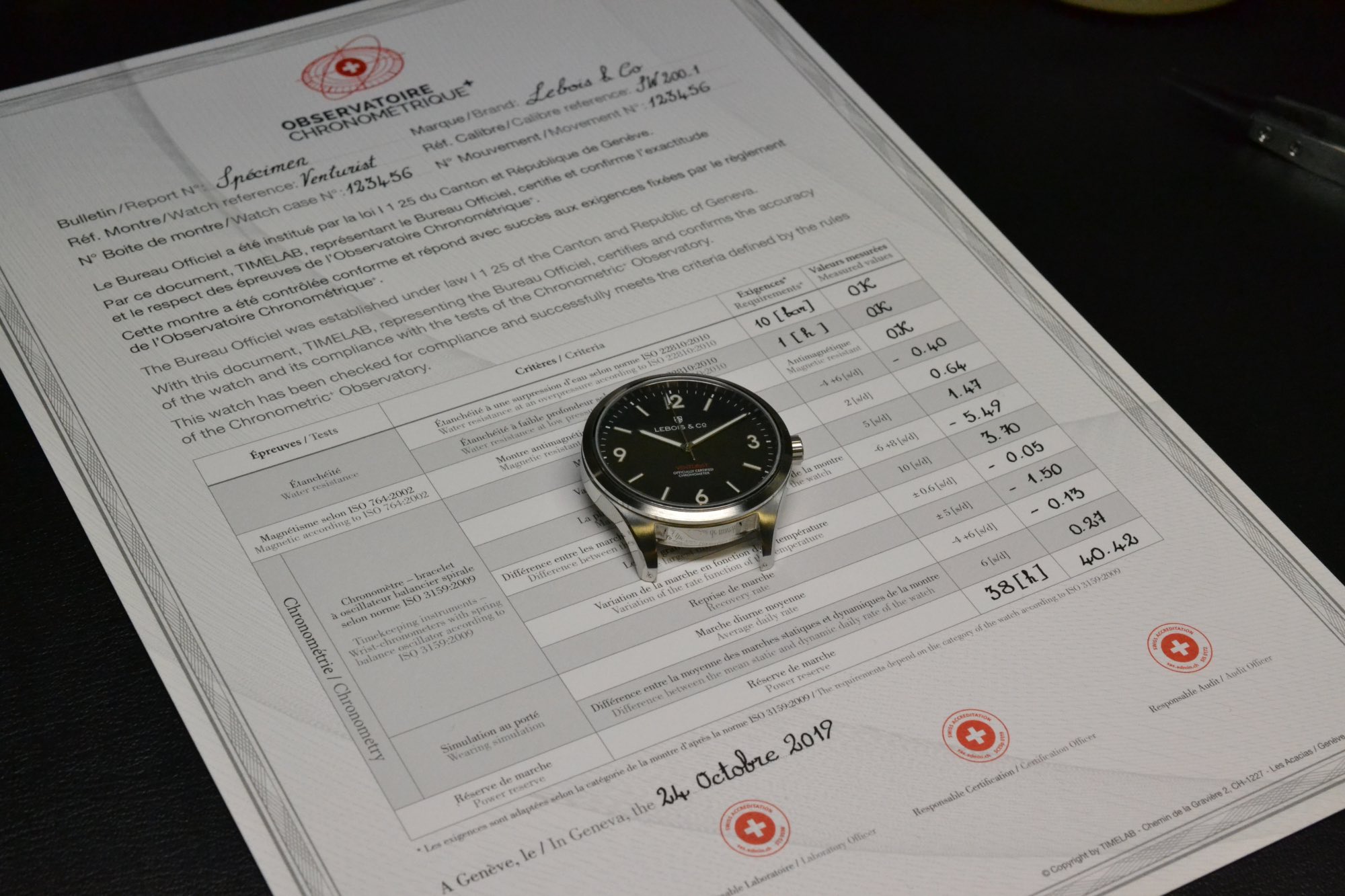 The Lebois & Co. Venturist and its Timelab Observatoire Chronométrique+ certificate

As mentioned, this certification is very serious, as it is backed by a very serious institution. Still, it is quite obscure. Van Wijlick found it more or less by accidence, he tells me: “About four years ago, I first found out about the Observatoire Chronométrique+ certificate by Timelab. That was at the EPHJ fair in Geneva. I was immediately impressed by this new protocol and already on my way back home, I started thinking about how I could obtain it for my new watch. After quite a lot of communication and one more official request, I brought my first visit to Timelab in October 2016. In 2017 they started testing my first prototype, which really helped me in the development. At that time, the design of the Venturist wasn’t ready yet, but I did know the basic concept of the watch. Eventually, the first Venturist to really complete the entire testing cycle succeeded in the spring of 2019.”

The story of Lebois & Co. itself is not completely unique. The brand was first founded in 1934 by a French watchmaker in Switzerland. It never really took off and in 1972, shortly after the beginning of the quartz revolution (and before it was even a crisis), it collapsed. In 2014, Dutch entrepreneur and watch enthusiast Van Wijlick reregistered the brand and started developing watches. First was the Avantgarde Date, launched in 2015 with the help of Kickstarter. That piece was quite straight-forward, but Lebois & Co. has developed nicely since. 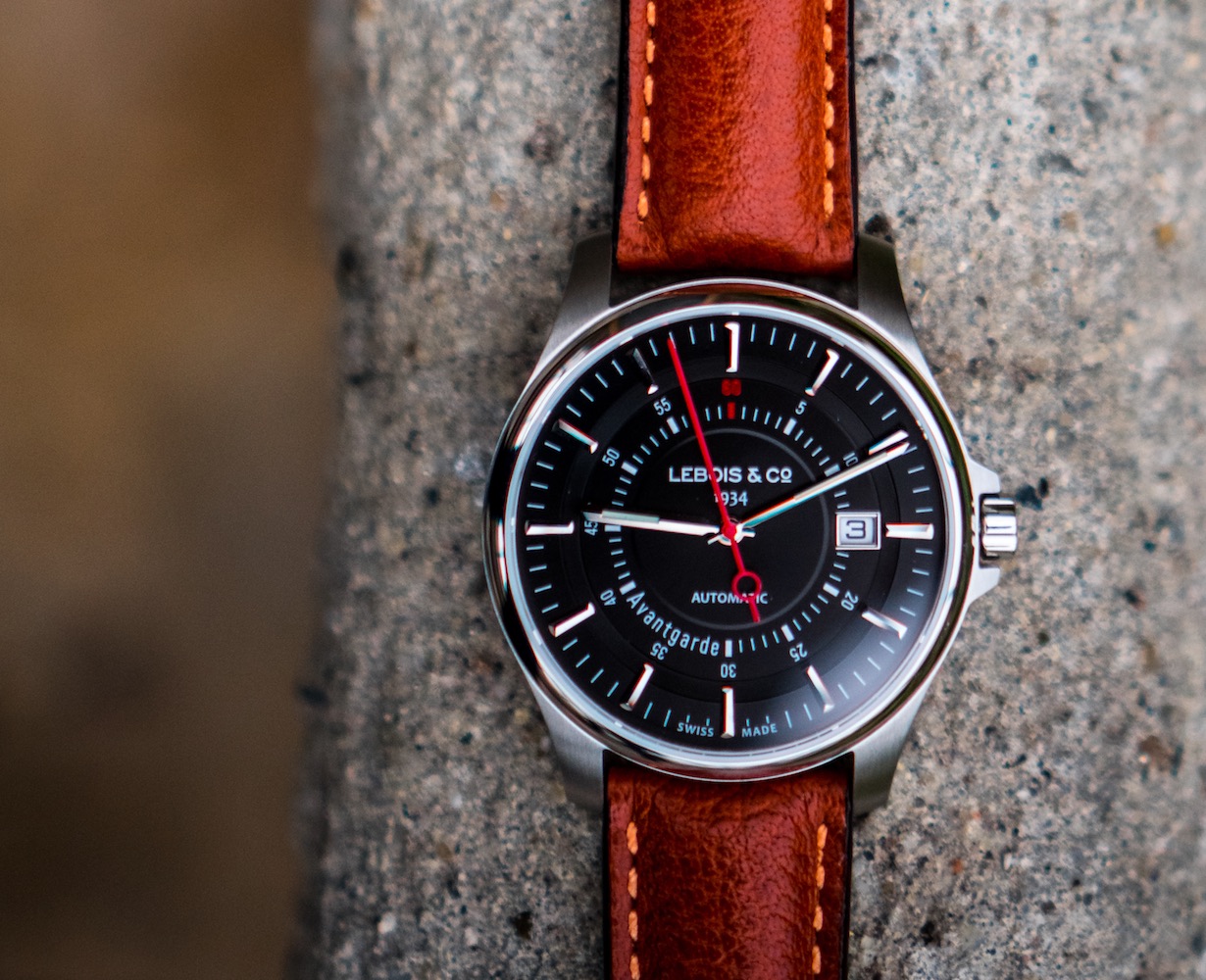 For his latest piece, the Venturist, Van Wijlick got help from two different investors. But he needs even more cash. To do that, Van Wijlick decided not to just sell watches, but as a true Dutch entrepreneur, he also decided to sell shares of his own company. So you can either buy the Venturist watch for EUR 2,500 or buy the watch in the Venturist Shareholder Package, which basically makes you a shareholder if you buy one of their watches. The price is still EUR 2,500 for the watch, but during this short period, you will get a 40% rebate on the watch plus shares in the company. In total, Van Wijlick is looking to find some 75% of the EUR 500,000 needed.

The Chronométrique+ certification is quite impressive, but its roots are humble. At the heart of the Venturist beats the well-known Selitta-based SW200-1. Which is quite an interesting choice in itself, as the SW200-1 might be famous for reliability, but less for sheer accuracy. Van Wijlick explains: “we used the Sellita SW200-1 before, in the Avantgarde Date. The movement has proven itself, in both finishing and performance (which was truly good). The collaboration with Sellita is very good as well. They understood what we are doing and were very helpful in achieving our goals.” 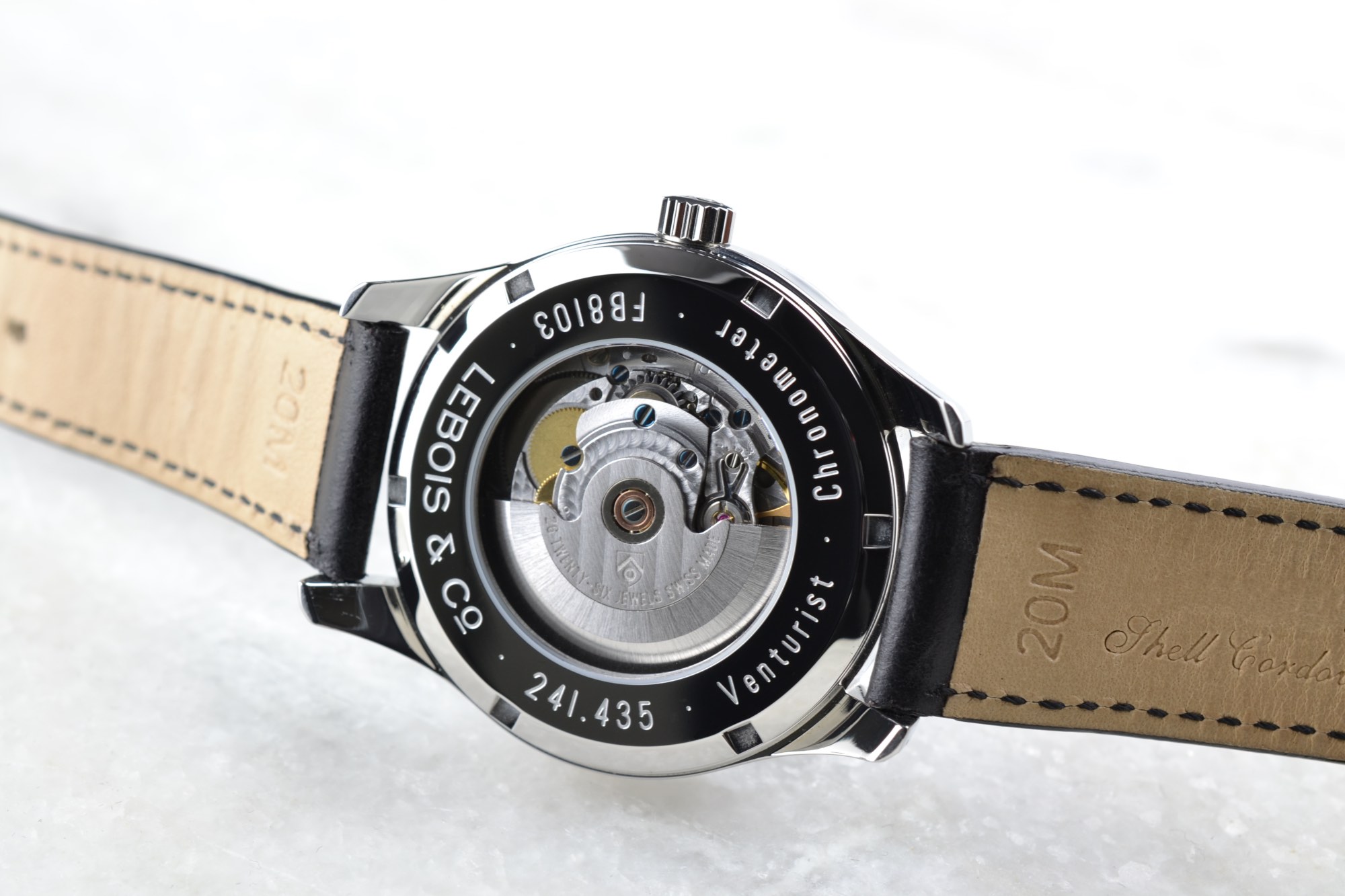 Of course, some adjustments had to be made to the basic movement, but as Van Wijlick puts it, not too many. “Of course, we are using the top-grade movement, with the Incabloc shock-absorbers and Glucydur balance wheel, which is regulated within COSC-criteria.” 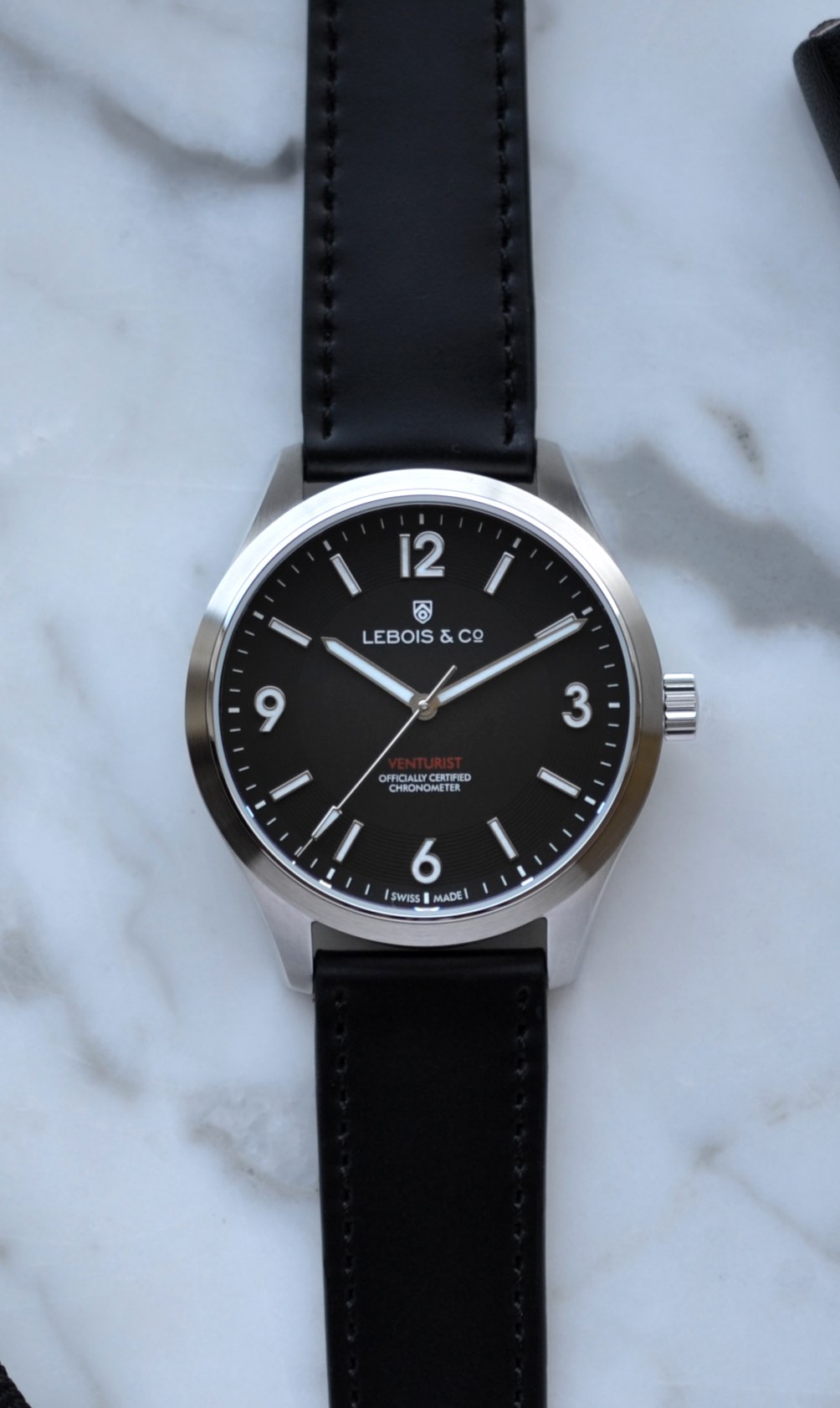 All the design work is done in the Netherlands, and that shows. The overall look of the watch is clean, toolwatch-like. It has a stainless steel case (316L), the diameter is 41mm and the height is 10.5mm. The movement is shown through the open caseback and that was much more of a challenge to get certified. Van Wijlick: “we really wanted to give it the open caseback to make it possible to enjoy the movement and its finishing. But we also had to make sure the movement is antimagnetic, 100m water resistant and not too heavy. All of these criteria were met; the watch weighs just below 60 grams without the strap.” 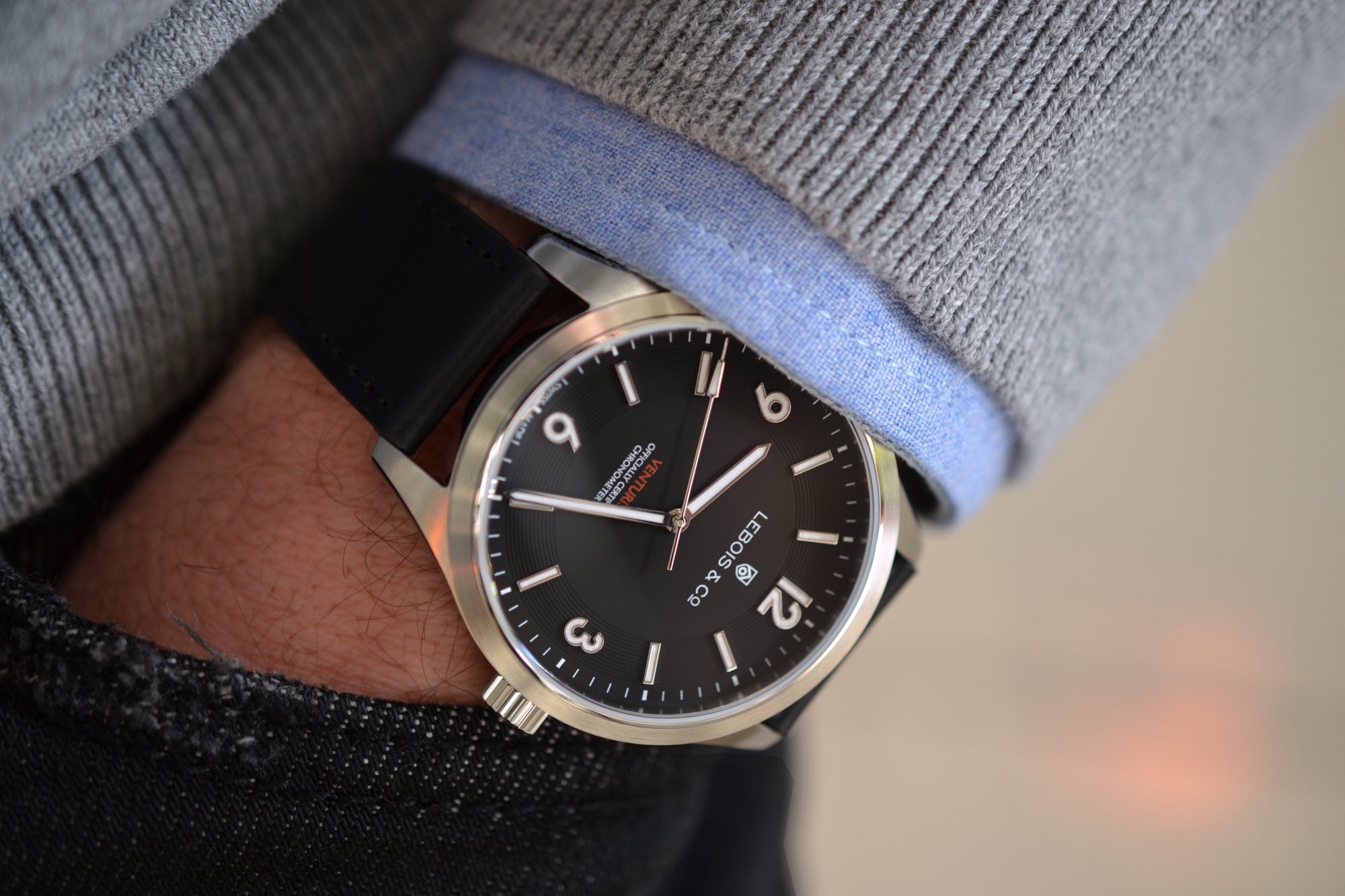 Talking about the strap, the Venturist Observatoire Chronométrique+ Chronometer comes with a smart black NATO and a genuine Shell Cordovan leather. 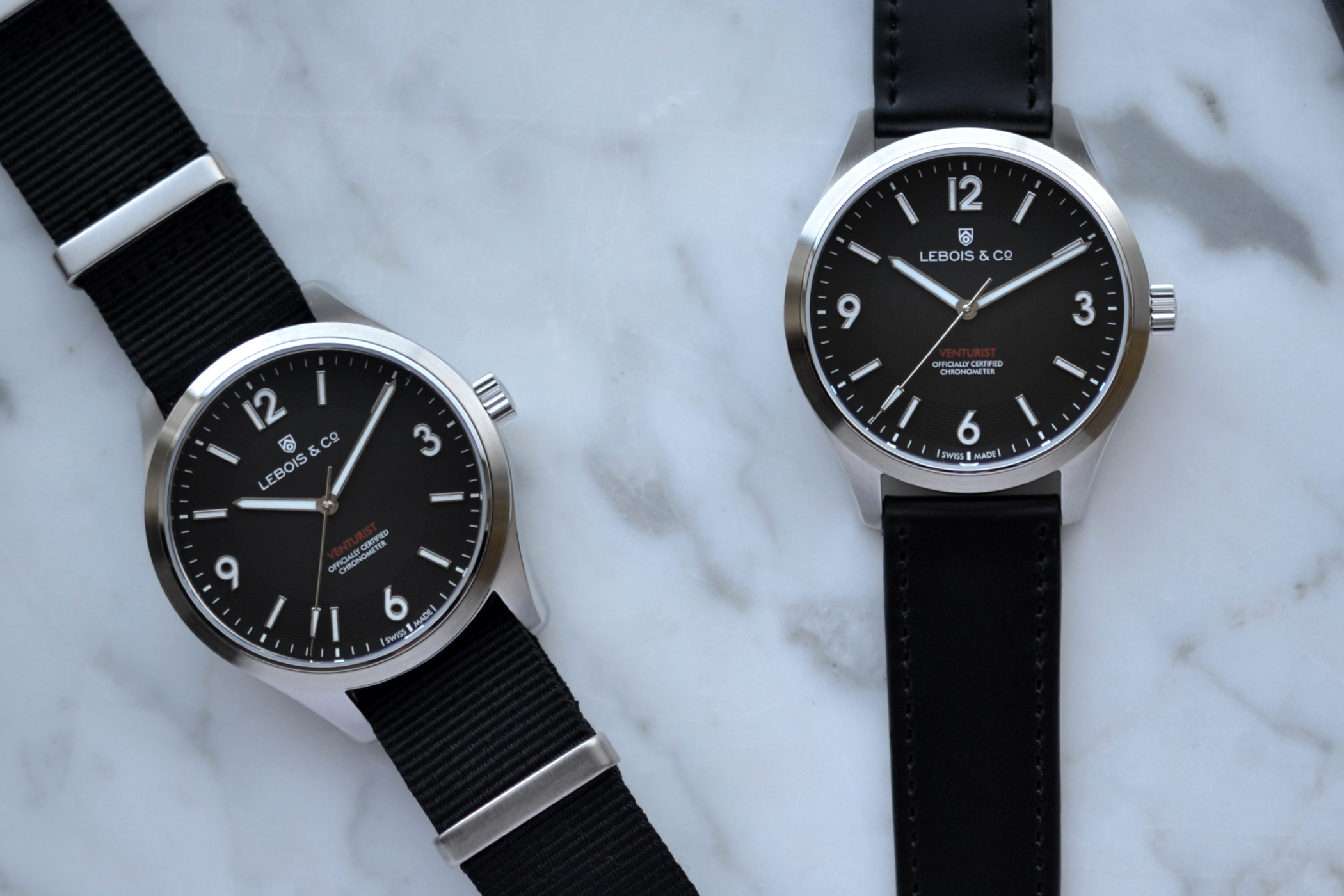 The rest of the design is just as toolwatch-like. The matte black dial has a smooth central section surrounded by a ridged outer chapter ring, and a narrow minute track spans the outermost perimeter. Large, applied indices sit within the ridged section with Arabic numerals at 12, 3, 6 and 9 o’clock. All indices are filled with Super-LumiNova, along with the entirety of the silver hour and minute hands. The seconds hand has lume in its triangular tip. The company name is printed at the top with the new shield logo, which was derived from the coat of arms of the Van Wijlick family. Those who purchase the Shareholder Package will get a shareholder hallmark on the screw-down caseback.

Although the first Lebois & Co. Venturist was certified in May 2019, it took the microbrand quite some time to get production started. But now, exactly 85 years after the company was founded, the first watches go on sale. Of course, you can make a reservation or get your information from Van Wijlick via their website. But, he adds, “in the first months of 2020 we’re going to organize ‘An Evening with Lebois’ events in Frankfurt, Amsterdam, London and Los Angeles. We’re currently planning the date“. 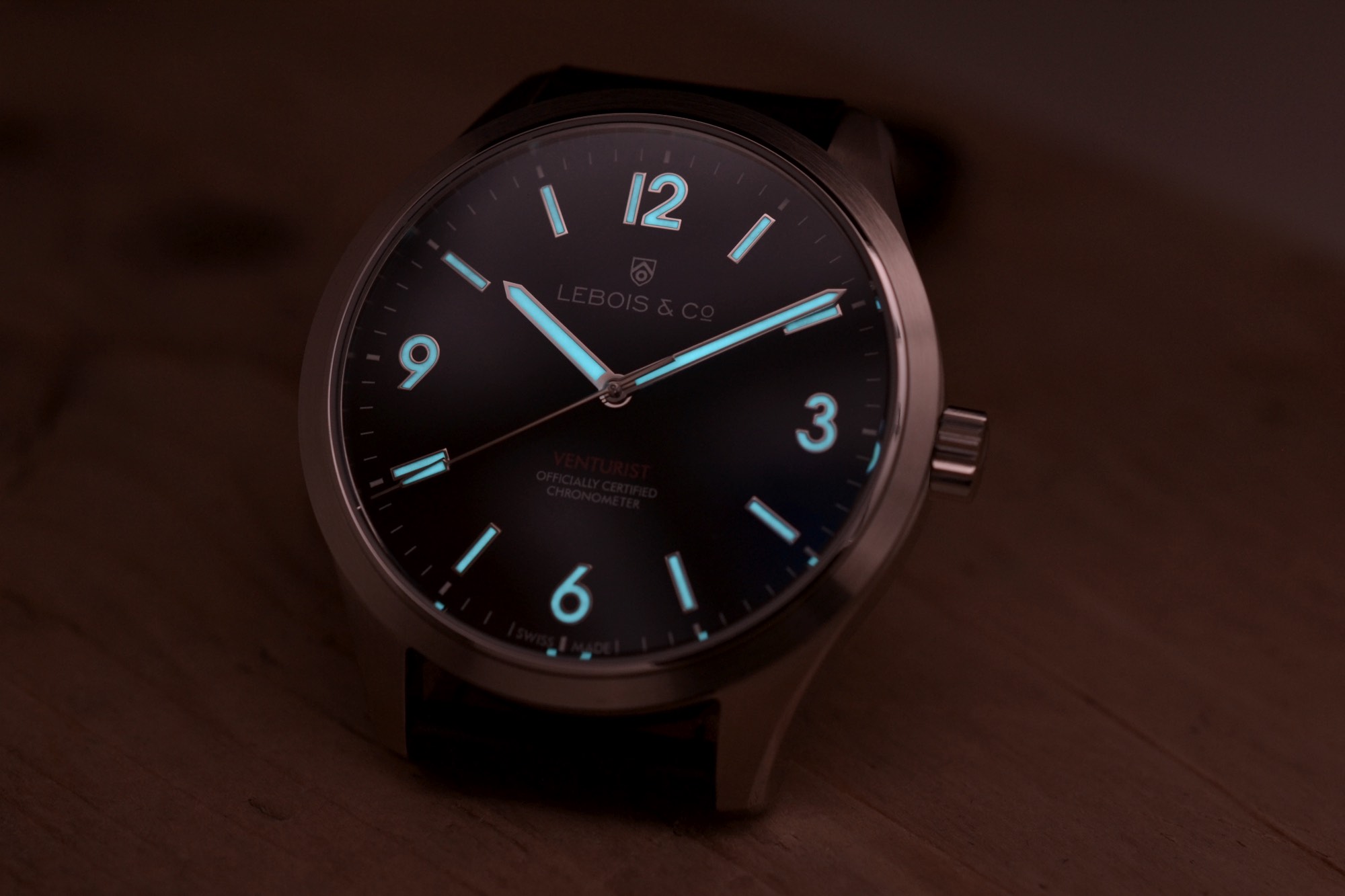 Prices for the watches are kept relatively low, considering the amount of work that went into the development and the certification process. The price for the steel 41mm version is EUR 2,500 with or without the shareholder package. “We tried to keep the price as low as we could while still offering a special watch with a unique selling point,” Van Wijlick says. “And that fits our vision perfectly.”

More details and orders at www.leboisandco.com.