I strapped the new IWC Pilot Automatic Top Gun around my wrist and started thinking. Is this contemporary, black ceramic interpretation of the world’s most famous war watch actually the coolest iteration to date? Is the predecessor of the famous Mark XI now the cool cat of the collection?

Understanding IWC’s ever-expanding Pilot’s collection is an art in itself. The essential differences between ‘Classic’, ‘Top Gun’ and ‘Spitfire’ (not even mentioning the ‘Pétit Prince’ and ‘Antoine de Saint-Exupéry’ editions), are not really worth getting into –  the watches are too cool to lose ourselves in those silly details. Let’s just start with sorting things out. Both the ‘Classic’ and the ‘Top Gun’ collections contain tool watches, but the best way to describe the difference is the latter is the first one with a contemporary twist. The Top Guns are a bit more fashionable and a little bit younger. Also, the prices differ. 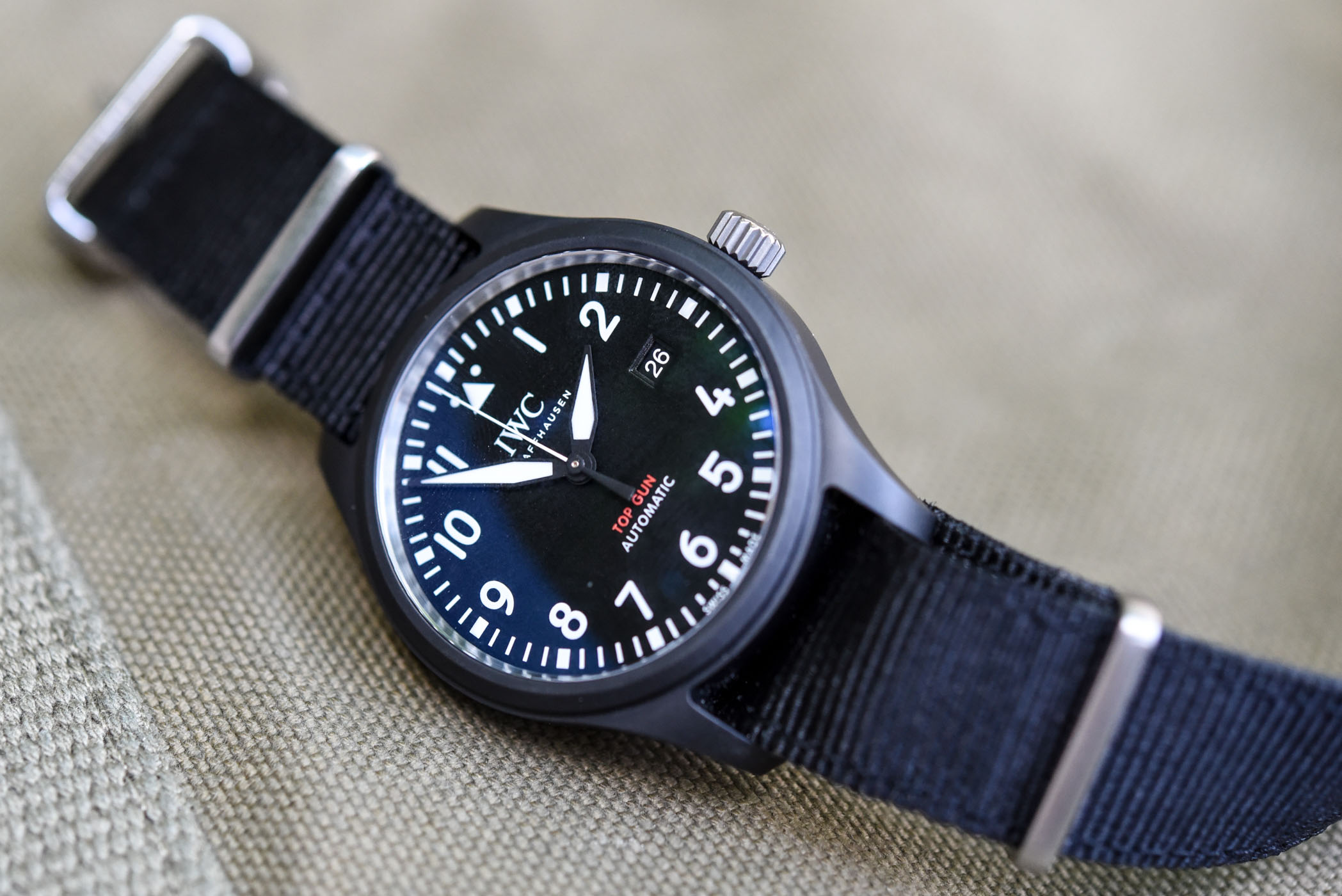 The basic automatic pilot Top Gun costs EUR 6,150 whereas the just as basic, stainless steel, Classic Mark XVIII is EUR 4,640. This difference of 1,5k can be explained by things that might go unnoticed to laymen. Those ‘Big Differences’ that could explain the divergence are the 1mm difference in case size, the different case material and the incorporation of a different calibre. And again, at first glance, there are not many notable differences between the two movements either. The Top Gun’s movement, calibre 32110, is an ETA 2892 base, and the Classic’s calibre 35111 is based on the Sellita SW300, which is… indeed, practically the same. At first glance that is…

The story of these watches is fascinating, and I guess every other company envies IWC for not having a pilot’s watch this famous in its collection. The watchmaker from Schaffhausen has been making these pieces for nearly a century. The International Watch Company launched its very first pilot’s watch (the Special Watch for Pilots) just before the Second World War, in 1936. This very first watch wasn’t meant to be a war tool, though. It was mainly intended for civil aviation use. The style was also very typical for the fashion of that time – elegant and expressive. It had large, luminous Arabic numerals and a subsidiary seconds dial at 6 o’clock. But most striking were the big, round, graceful hands that decorated the dial and took care of the most important task of any pilot’s watch: ensure perfect legibility. In the following years, IWC would start producing the now-famous B-Uhren, for the German army as well (it was the only Swiss company to do so. All other producers of these tool watches were German). 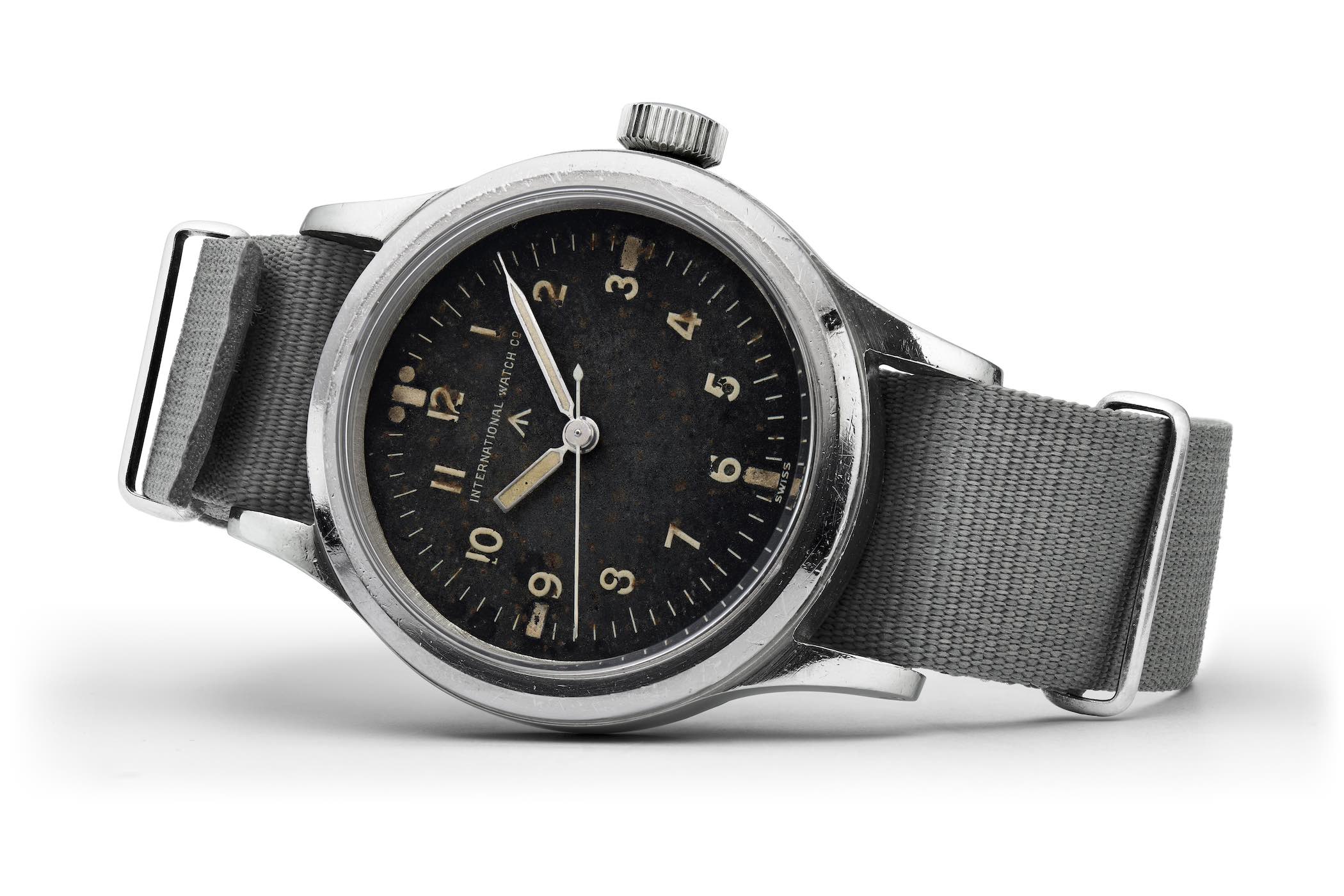 A vintage (and probably field-tested) IWC Mark XI, the inspiration for most IWC pilot’s watches

Later, IWC also started manufacturing for the British Army. Still, it must be said, IWC wasn’t the most important supplier to both sides. And it wasn’t until 1949 that the legend truly started to take shape, with the launch of the original Mark 11 Navigator’s wristwatch, designed for airborne personnel of the RAF. In service until 1981, the Mark 11 was eventually superseded by the extremely popular Mark XII in 1994, which itself was replaced by an updated model and so on, until the arrival of the just-about-perfect and basic IWC Mark XVIII in 2016.

Despite the minimal factual differences between the Top Gun and its Classic brother, there’s definitely something about the Pilot’s Watch Top Gun that gives it a little more presence on the wrist. It’s just a bit cooler, more masculine, more contemporary. 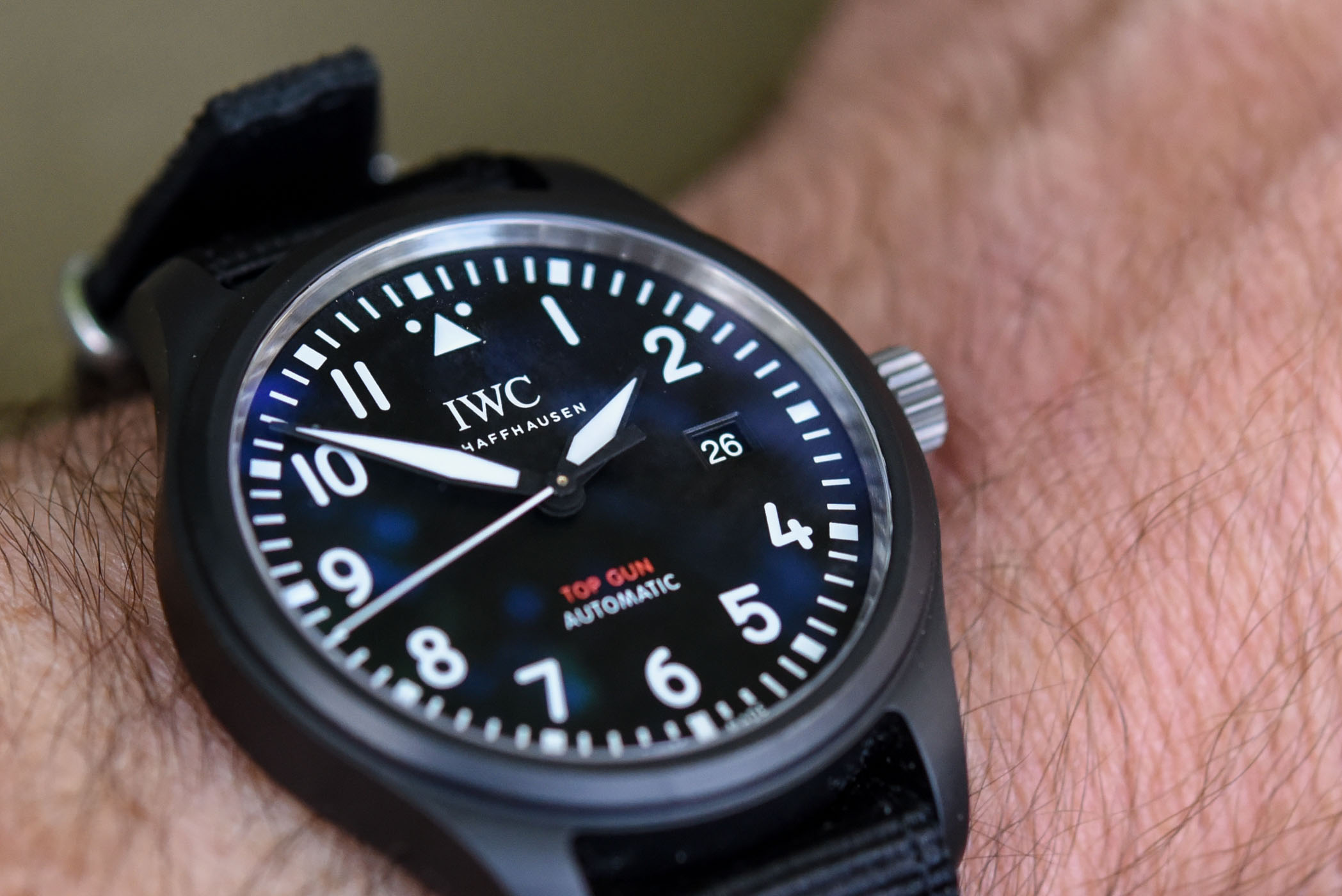 That’s partly because the case is 1mm bigger (it measures 41mm). But it’s the black ceramic case that really makes the difference. That matte black is just cooler, more modern and amplifies its tool watch character. This is one watch that goes perfectly well with that jeans-and-T-shirt-look, or that stands out during your rolled-up-sleeve-meeting at the bar. This case shape has withstood the test of time, and with good reason. It sits comfortably around the wrist and is just sleek enough to wear despite its serious size.

The case is made out of non-reflecting, black zirconium oxide ceramic, which is supposed to be the main reason for the price difference between the Classic and the Top Gun version. This matte black really does give the watch more personality and coolness. Whether that is your taste is obviously up to you. I honestly think the ceramic case looks better, although, as I’ve mentioned before, I just can’t get over that price mark-up… 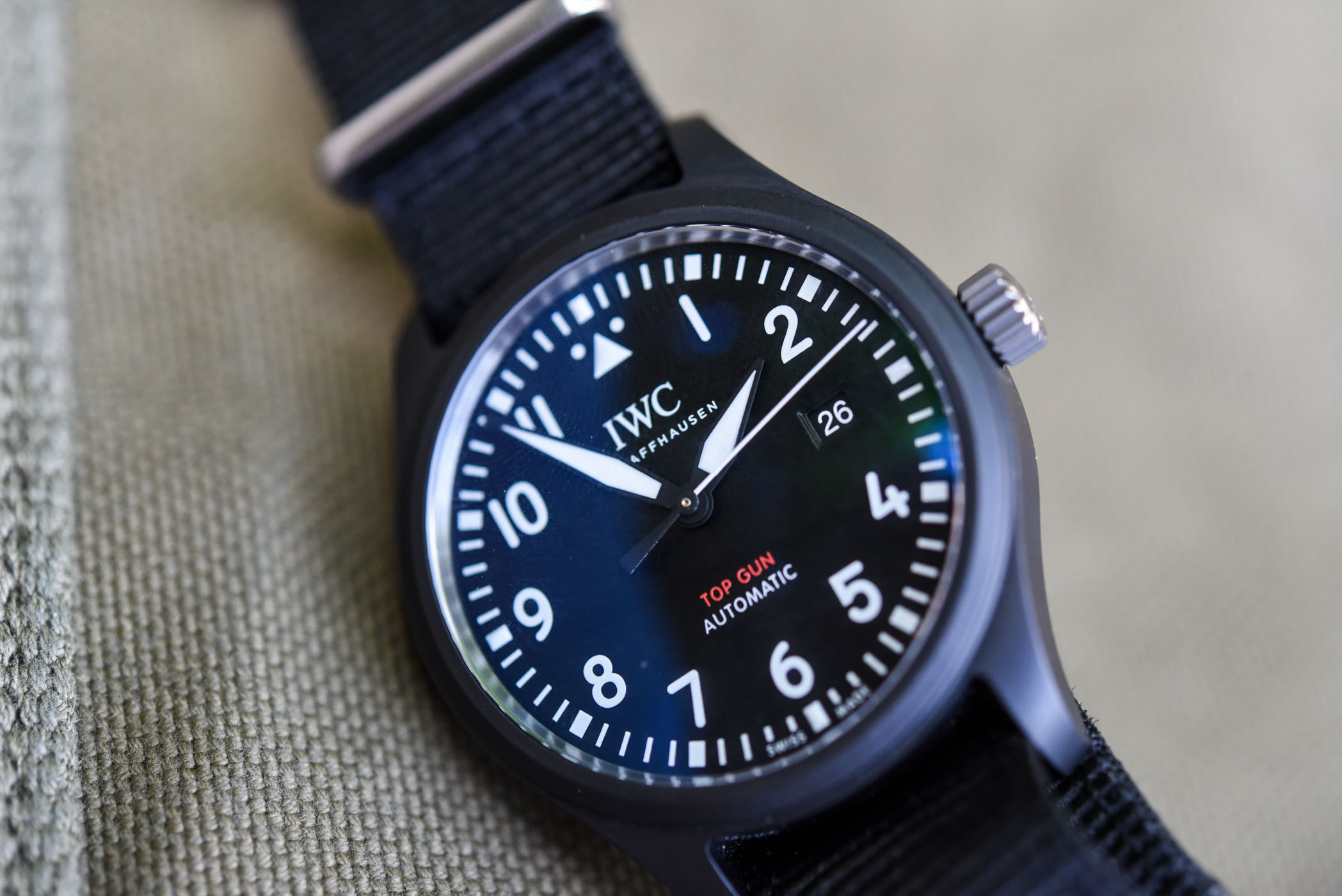 The caseback is titanium with the famous TOP GUN logo engraved in the centre. The crown screws down and allows the case to be water-resistant to 60 metres. The dial is protected by a domed sapphire crystal with anti-reflective coating on both sides, which is protected against displacement from sudden drops in air pressure.

The watch is standard delivered on a NATO strap, which of course is a cool choice, but also an odd one. First of all, NATO straps are quite cheap and the Top Gun is definitely not a cheap watch. (What’s more interesting is that the cheaper Classic version is delivered with a leather strap made by Santoni…) The lug length of the case is just enough to let the watch fall nicely around the wrist even with a NATO strap, which really is a good thing – not every watch handles that extra thickness well. IWC could’ve done better by offering two straps for the same price – as Cartier did with its wonderful new Santos. I guess it would’ve felt like a fairer deal.

The dial is a classic pilot’s watch dial. Large white Arabic numerals guarantee perfect legibility and a minute track spans the dial’s edge with five-minute marks. Not completely necessary but also not completely out of place is a date with numerals and black background window at 3 o’clock. The hands are black with plenty of white luminescence and have the same propeller shape as previous Pilot’s models. Clean, legible, cool – just what you would need in your fighter pilot’s life. 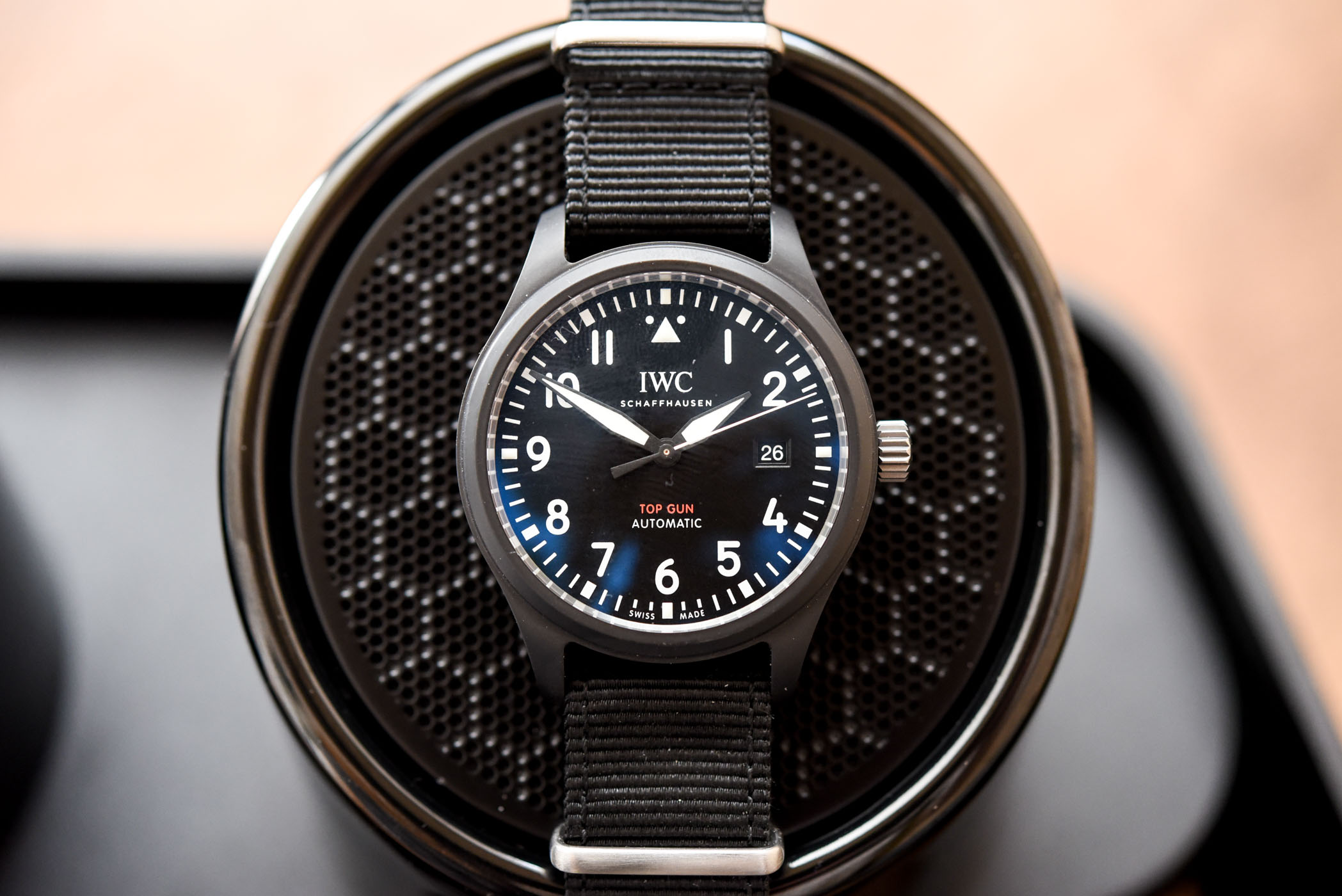 Another fine detail I like is the stainless steel crown. This is not only practical (ceramic or coated crowns are just no good), it also gives the overall design a little bit more depth. When you wear the watch on your wrist, the crown stands out even better. Maybe a larger, pilot-style crown would’ve been cooler. Another fine detail is the red lettering on the dial, confirming watchmaking’s First And Most Important Design Equation: black+white+red=coolness.

Why it’s not called a manufacture movement

It’s also worthwhile taking a better look at the movement, the silent hero of this watch. IWC claims its 32110 calibre is “IWC-manufactured”, which has the company stopping short of saying it’s actually a manufacture movement. And for good reason. The 32110 calibre has an ETA 2892-A2 base, but that doesn’t mean the company from Schaffhausen hasn’t done anything to the movement. In fact, it’s actually quite heavily modified. The escape wheel and pallet lever are made from silicon and the winding system has been replaced by IWC. This pawl system is a variety of IWC’s much-praised Pellaton winding system. The power reserve has been expanded to 72 hours and IWC claims its lubricants are also different. Functions include central hours, minutes and seconds (hacking) with a date complication at 3 o’clock. 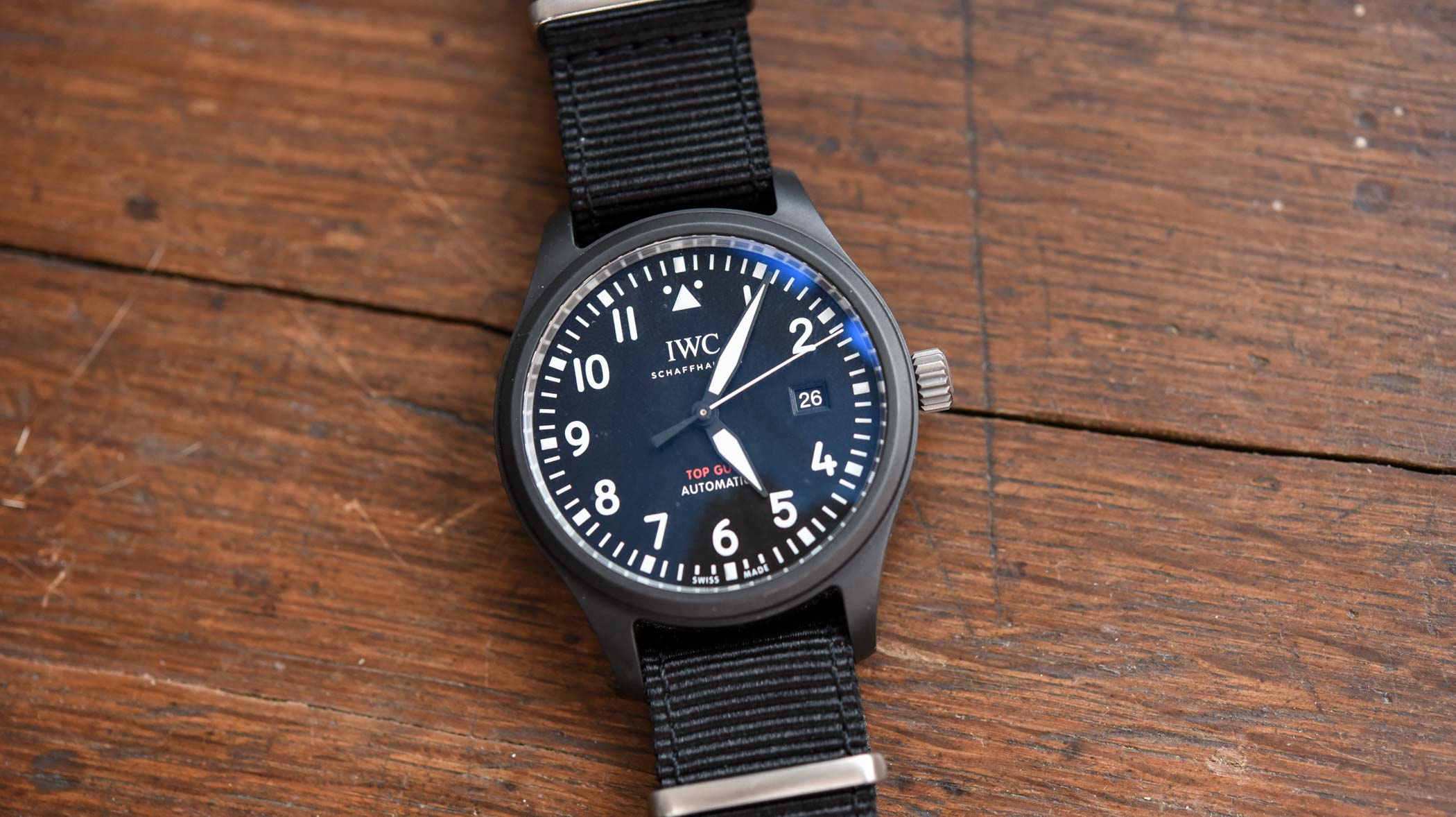 Is the Top Gun actually better than the Classic Pilot’s Watch?

The IWC Pilot’s Watch Automatic Top Gun is, in my opinion, the coolest dude in the Pilot’s collection, there’s no doubt about that. And this is undoubtedly a watch that will stand out. I personally think it is an excellent reimagination of the pilot’s watch, and it does exactly what IWC has been doing so well in the last decades: making very cool tool watches. Whether those twitches prove to be enough to really make the mark-up worthwhile – I’m not so sure. To me, it feels like IWC thought: yeah, we know the Top Gun is cooler, that’s why we’re adding some technicalities and making it more expensive. And that makes me conclude that I honestly think the watch is really cool and well-executed, but… the price could be just a bit fairer. That would make the watch even cooler.