It’s not hard to find sophisticated, eye-popping dial designs these days, but it usually comes at a price. Look no further than brands like MB&F, Jacob & Co. and Greubel Forsey for radical, out-of-the-box watches that are pure eye candy. Unfortunately, you probably can’t afford one (and neither can I), but that doesn’t mean you still can’t wear a mechanical showpiece on the wrist. We covered microbrand Humism back in 2018 when they launched a small collection on Kickstarter, but its affordable watches were anything but ordinary. In lieu of something resembling a conventional dial, Humism creates wearable kinetic art that also happens to tell the time, supporting worthwhile charities along the way.

Kinetic art is a medium that uses physical motion to create an effect. An always moving pattern that becomes an optical illusion. Avant-garde artists like Naum Gabo and Marcel Duchamp were pioneers in the early 20th century with kinetic sculptures (Gabo’s Standing Waves and Duchamp’s Rotative plaques verre, optique de précision were among the first modern kinetic artworks). Common mobiles and many outdoor, wind-powered sculptures often meet the definition, and you’ve no doubt seen or even owned kinetic art at some point. Fitting such a medium into a wristwatch is certainly unique and Humism is among the first to do it. Venezuelan artist Rafael Parra Toro has designed mechanical kinetic art watches as well and Los Angeles-based microbrand Zinvo has a BLADE series with comparable rotating “turbines.” Humism’s collection is arguably the most polished of the bunch with impressive attention to detail. 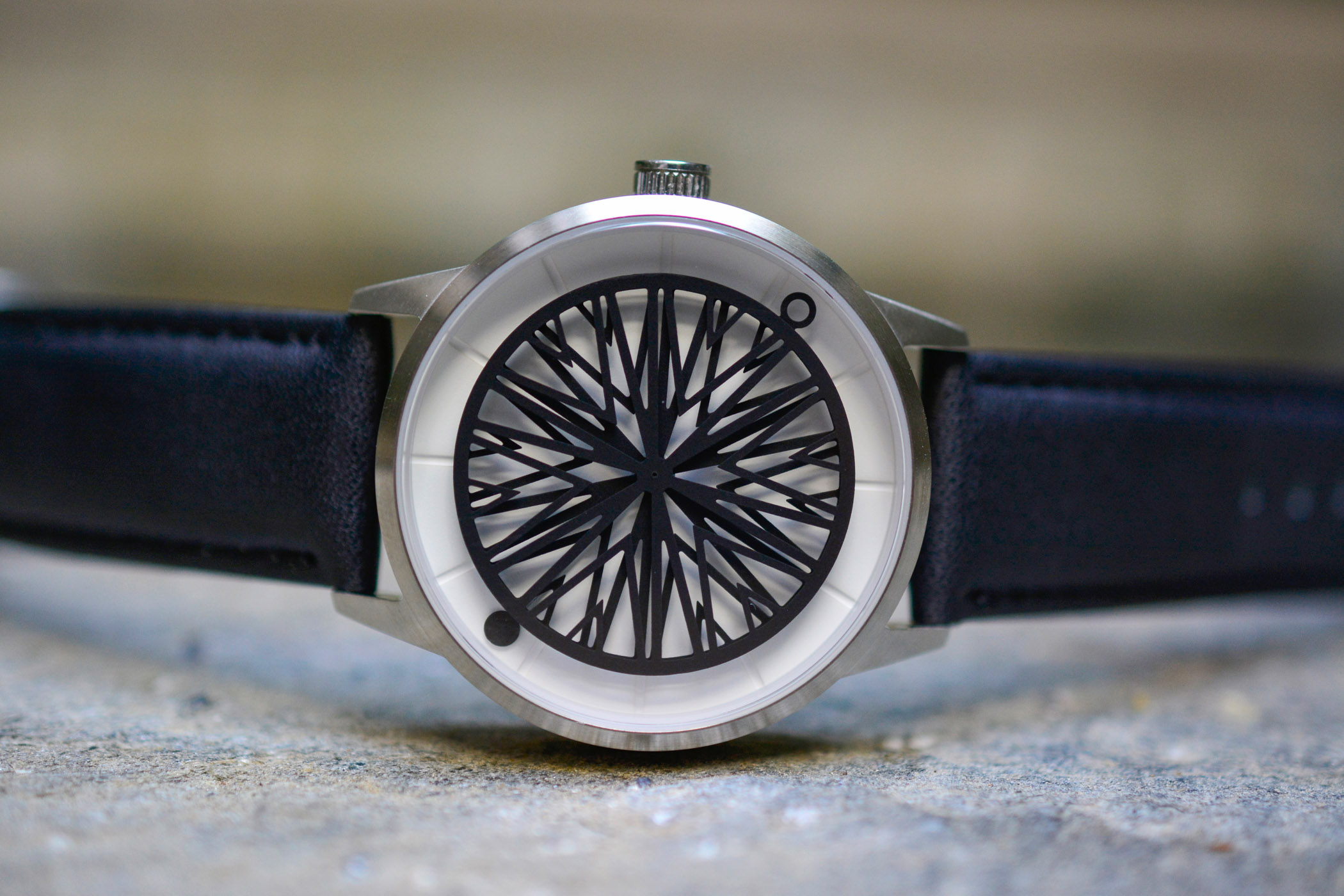 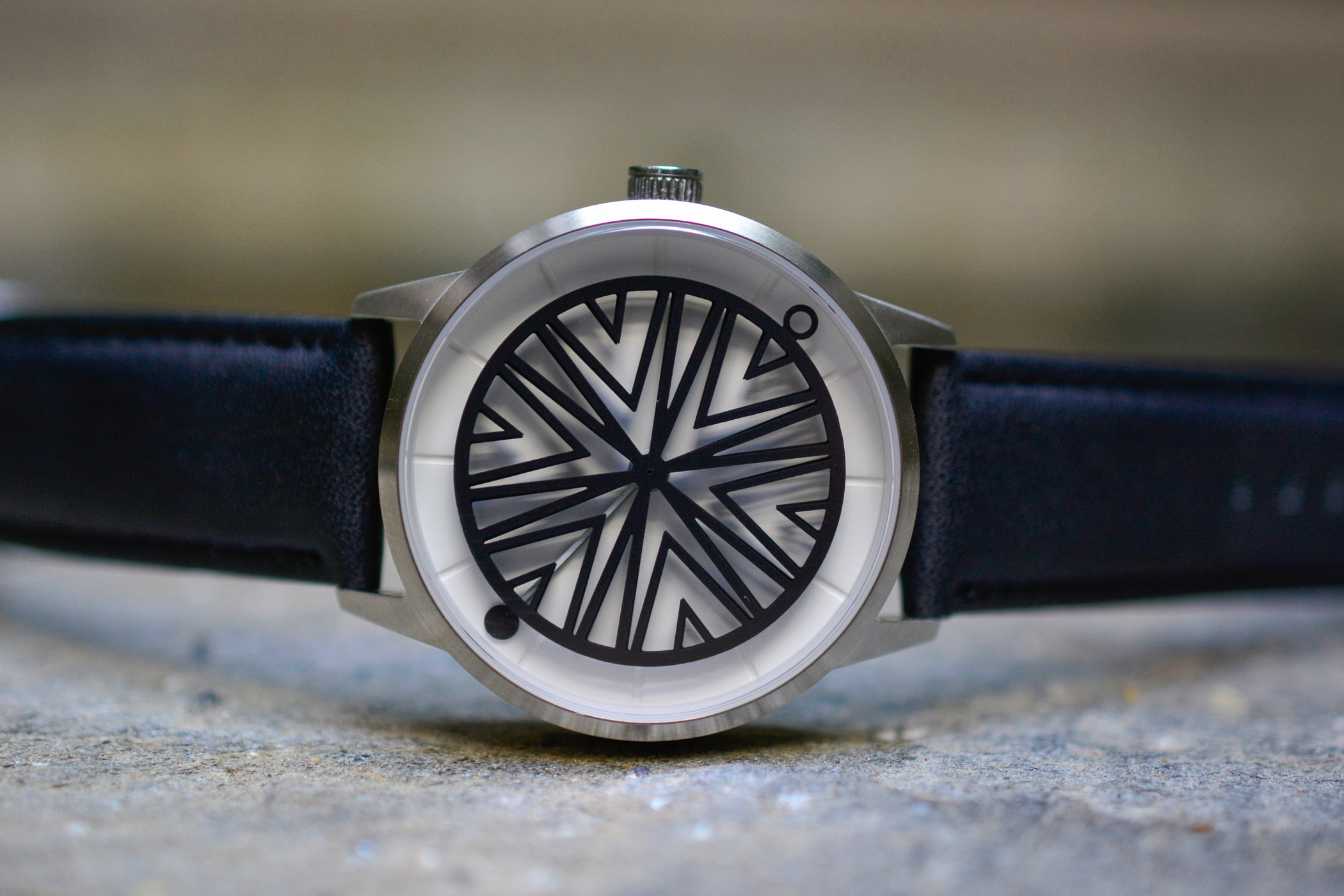 Seven watches comprise Humism’s recent collection with four currently available – Kato, Dasein, Rhizome and Dasein HELIOS (a DLC black and yellow variant) – and have either straight/angular or round themes. We have the Rhizome on-hand and it sports one of the most unique dials I’ve seen lately. It took the brand more than 19 months and a thousand drafts to perfect the designs, and I can say it was well worth the effort. I found myself often staring at the watch for the optical effect, almost forgetting to check the time. And that’s exactly the point as the brand claims to be as much of an art studio as a watch brand. And as a bonus, five percent of every watch sold goes to Mercy Relief, a humanitarian organization helping victims of natural disasters in Asia Pacific. Aid has been provided to over two million people in 25 countries to date.

The case itself is nothing unusual, but well made nonetheless. It’s brushed 316L stainless steel with a diameter of 39mm and height of 11.4mm. There’s a sapphire crystal with an anti-reflective coating protecting the dial and a sapphire exhibition case back. The signed crown doesn’t screw down, but water resistance is rated at 50 metres, so it’s safe in the rain or a lap in the pool. The case back is secured with six screws, which give it both a rugged and refined aesthetic, and overall I’d say it’s an attractive case. 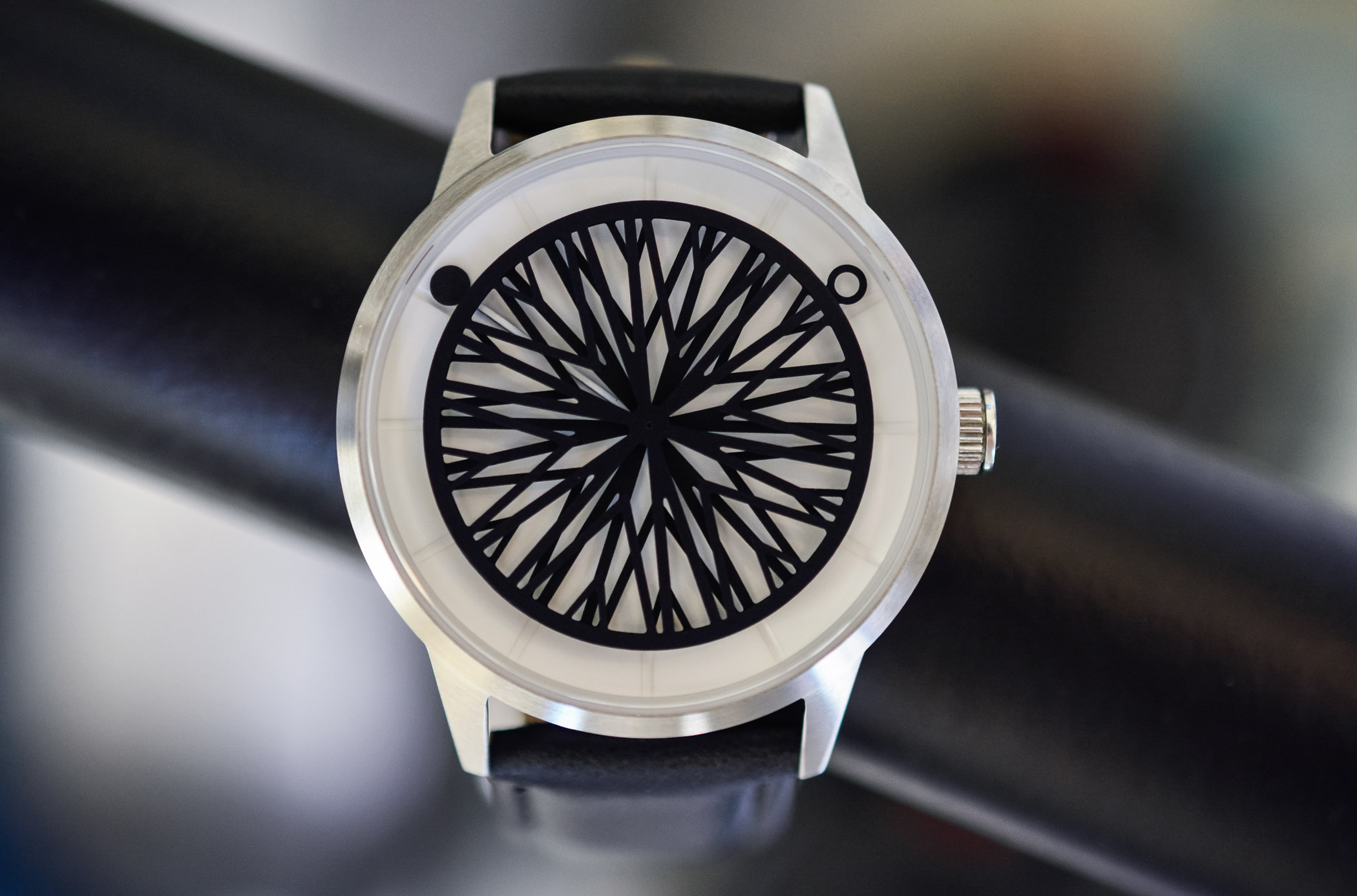 Lug width is 20mm and it comes with a black Italian leather strap with quick-release levers. I’m generally not a fan of supplied straps that are often too big or otherwise uncomfortable, but this one fits my somewhat small wrist perfectly. So much so, in fact, that I briefly used it with a field watch I wore on a hike last weekend (the quick release levers made it easy).

It’s all about the animated dial…

The star of the show is the dial as everything else kind of blurs into the background. I initially thought the kinetic artwork was achieved via overlapping clear discs with printed patterns, but this is more sophisticated. The discs are metal using proprietary Japanese technology to achieve an exact weight and balance to maintain consistent movement accuracy. It wasn’t an easy development process and several disc producers had tried and failed to meet Humism’s strict standards. In the end, these intricately cut metal discs create a genuine moving sculpture without a simple trick of the eye from clear printed layers. Underneath the discs is a white base dial that expands a bit beyond the discs, allowing for twin circles to relay the time. The hour circle is solid and extends from the central pin like a conventional hand, but the arm is hidden under the discs. The minute circle is open and an extension of the bottom metal disc that rotates once per hour. 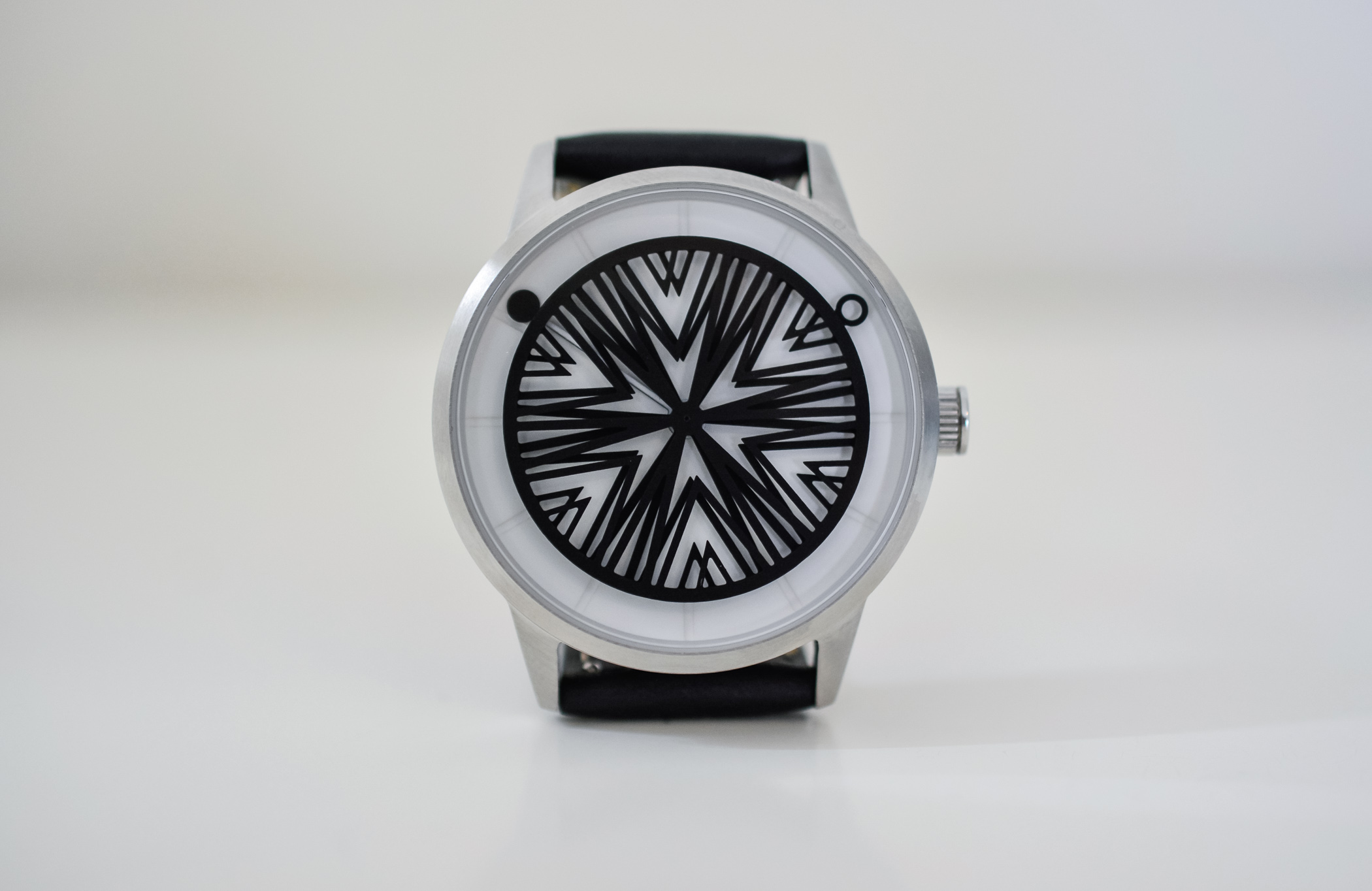 This relatively static disc contrasts with the fast-moving upper disc to create the “kaleidoscope” effect. The concept sounds simple, but the visual result is remarkable and true artistry is required to produce the intricately cut metal discs. Under the time circles are recessed indices marking the hours. And despite the distraction of a moving sculpture, reading the time is surprisingly quick and easy. We’re not in the realm of haute horology, but few dials are as dynamic and eye-catching as this, as you can see in the video here:

Powering the watch is a Seiko NH35A automatic – ubiquitous, reliable and an affordable Japanese alternative to Swiss counterparts. It has 24 jewels, beats at 21,600vph (3Hz) with a 41-hour power reserve. It can be hand wound and features Seiko’s Diashock shock protection system. The movement is also regulated to +/- 15 seconds per day. Functions included central hours and minutes, and although undecorated, the movement features a laser engraved custom rotor. 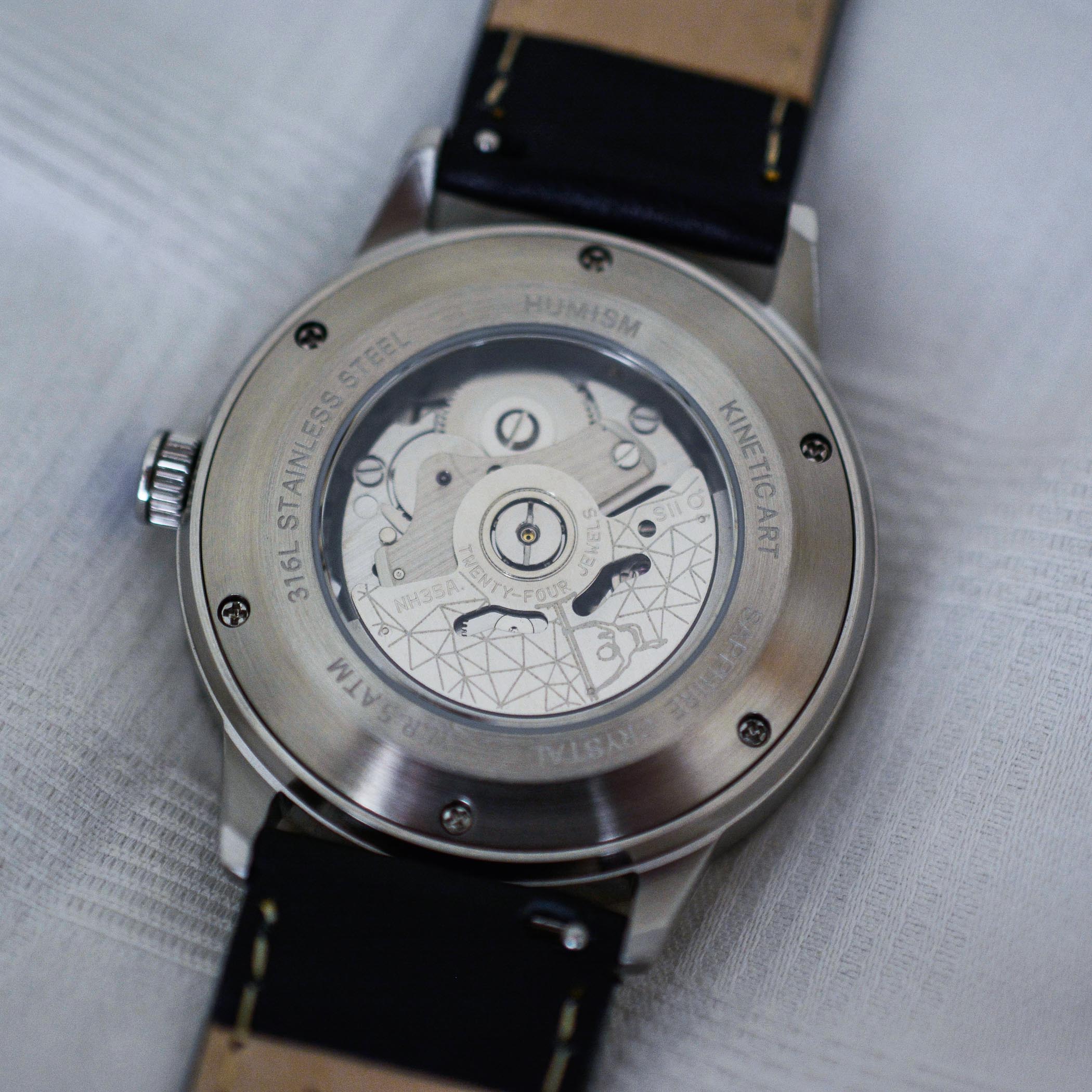 Humism has achieved something rare in the industry. It’s combined a pedestrian movement and case with a smart, whimsical concept that results in a lot of visual entertainment for not a lot of money. The movement itself is rock solid and accurate and doesn’t need to be anything special. Its job is simply to power the kinetic artwork while accurately relaying the time, and it does this perfectly. As mentioned earlier, founder and designer David Sze sums it up best – Humism is as much an art studio as it is a watch brand. The optical effect is simple yet dazzling, without the need for ultra-sophisticated automatons or grand complications. For just a few hundred dollars, this super cool party trick never gets old and is sure to impress both friends and strangers on a night out. 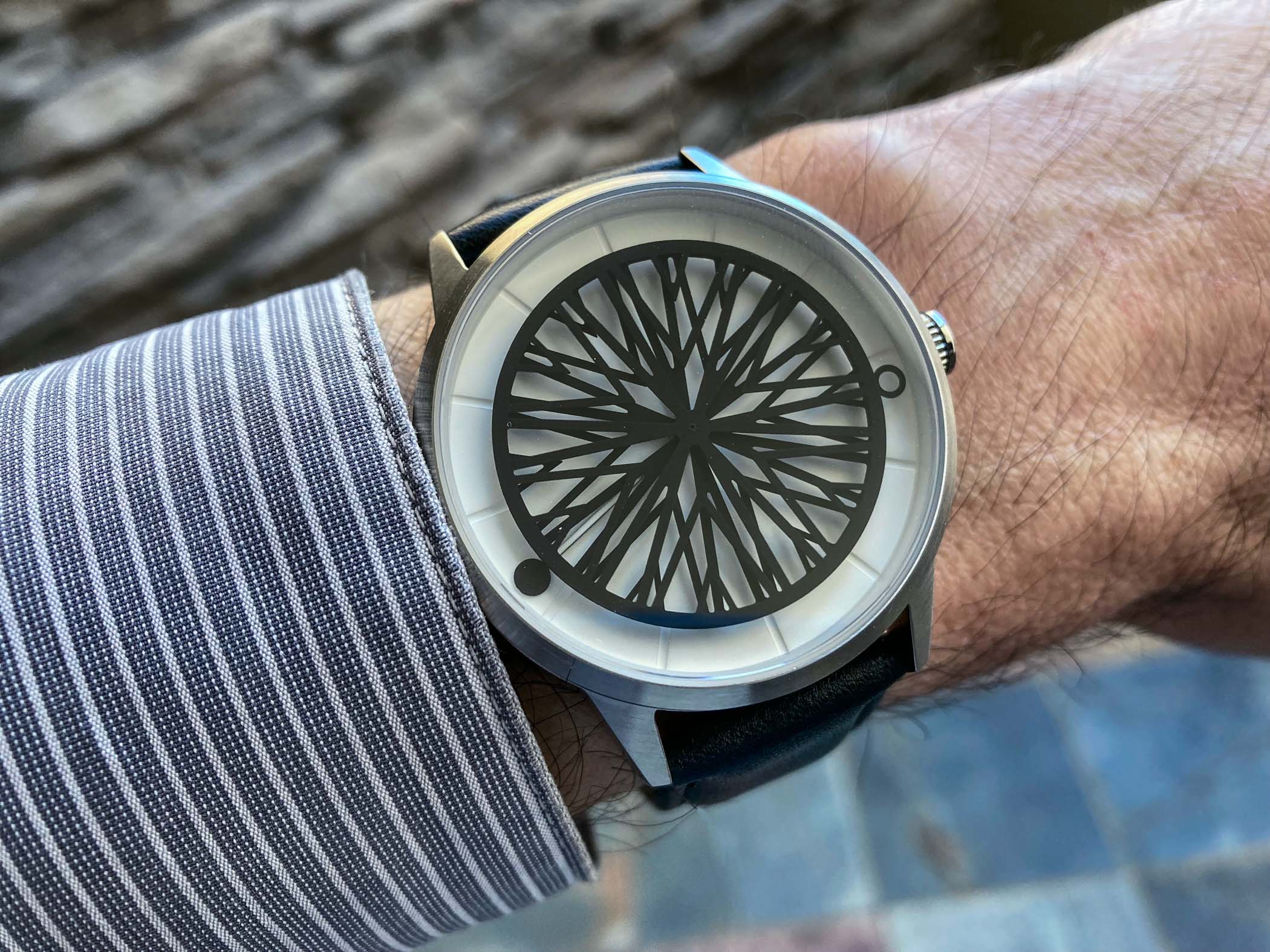 The Humism Rhizome Automatic retails for USD 318 and comes with an 18-month warranty, free worldwide shipping and a 15-day return policy. That’s a solid value proposition for such an interesting piece and several kinetic art patterns are available at that price. For more information and to make a purchase, visit Humism’s website.