Hamilton is no stranger to film collaborations, even producing the Jazzmaster Regulator Cinema in 2018 to celebrate 86 years in movies. A Ventura on the wrist of Elvis Presley in Blue Hawaii and custom pieces featured in 2001: A Space Odyssey highlight over 500 film appearances. Recent placements include several Men in Black movies and Interstellar, and the latest is a special edition of the Khaki Navy BeLOWZERO for Christopher Nolan’s upcoming sci-fi thriller, Tenet. The on-screen version differs a bit from the two Khaki Navy BeLOWZERO Tenet Limited Edition models, but most of the core ingredients that made it perfect for the film are intact.

Hamilton had previously worked with director Christopher Nolan for 2014’s sci-fi adventure, Interstellar, producing the limited Khaki Field Murph that’s closely linked to the movie. Hamilton was also featured in Nolan’s 2012 Batman epic, The Dark Knight Rises. Rumours recently emerged that the brand had again partnered with Nolan and we now have both confirmation of that and two new Khaki Navy BeLOWZERO Tenet Limited Editions. The watches offer a few cryptic clues to the movie, which has yet to be released. COVID-19 is to blame for so much uncertainty regarding summer movie releases, but a Tenet trailer provides a brief glimpse at what’s coming. John David Washington stars with Robert Pattinson and Elizabeth Debicki, and the watch is sure to get plenty of screen time in the action-packed spectacle. The model that Washington wears has a custom digital screen, but the new limited edition models will be more conventional with automatic movements and analogue dials. 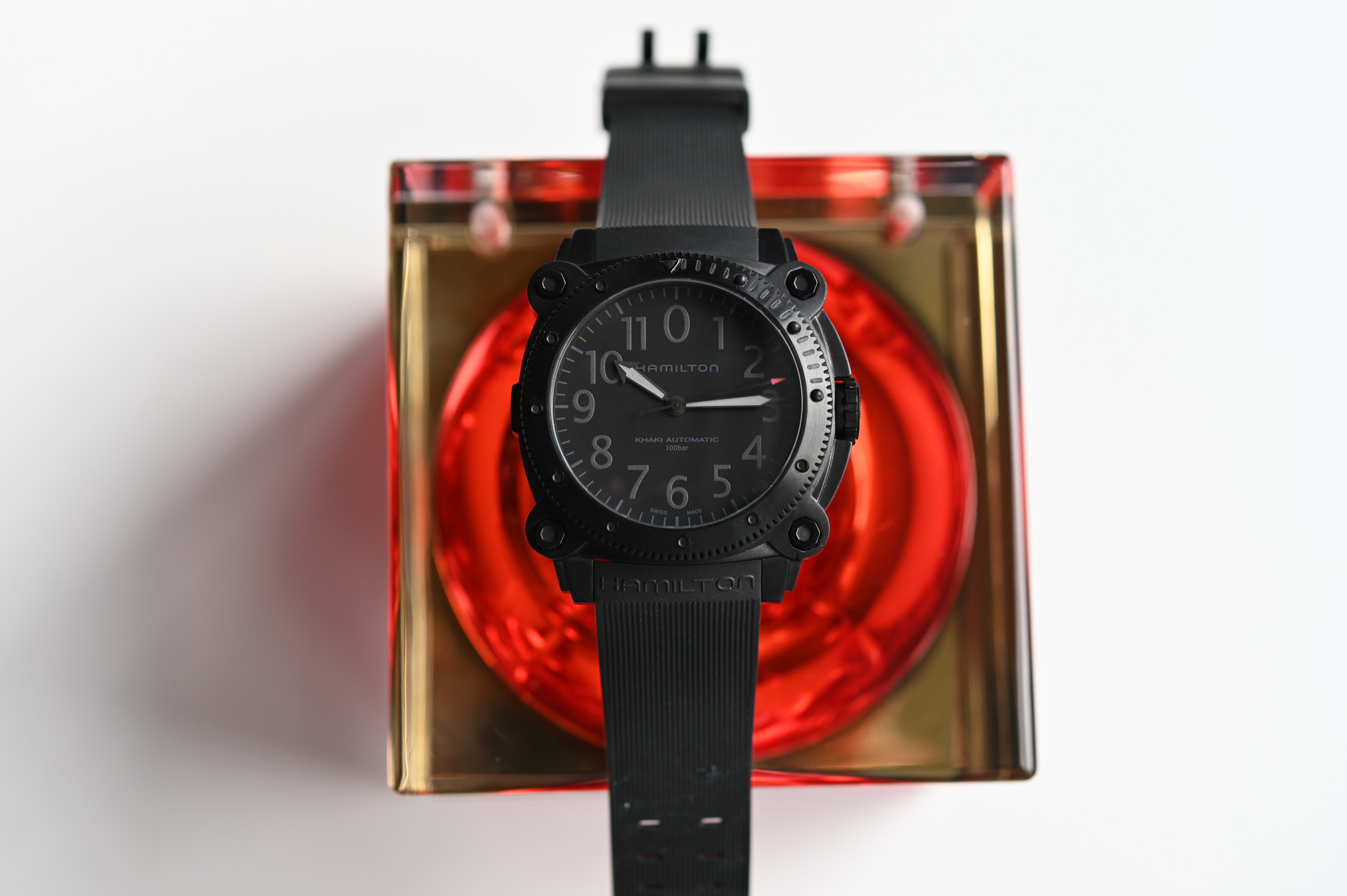 The Hamilton Khaki Navy BeLOWZERO Tenet Limited Edition models are modified versions of the existing, blacked-out Khaki Navy BeLOWZERO 1000m Auto. Unlike the Khaki Field Murph that debuted five years after the release of Interstellar, these new models are out before Tenet even hits the screen. Although they’re based on an existing watch, the movie watch was in development for 18 months at Swatch Group’s Swiss lab. Not much is known about this specially designed prop, but it features a more radical design and digital features, currently unavailable to us humble movie watchers. The new limited edition watches may be less complex, but they come with either red or blue-tipped seconds hands that somehow tie into the movie – like the red or blue pills from the Matrix? It’s all a mystery for now, so let’s take a closer look at the watches themselves.

The case is solid titanium with a hefty 46mm diameter, but the choice of metal keeps it lightweight on the wrist. Not much has changed from the standard BeLOWZERO model as we have the same blacked-out design (PVD coated) and rotating bezel with a detailed 15-minute scale and 12 o’clock marker. The design is positively industrial with exposed screws on the bezel and hex-style screws at four corner extensions of the case. A sapphire crystal protects the dial and the oversized, screw-down crown has Hamilton’s logo embossed. Titanium extends on the right side to form a crown guard. The lug width follows the large, masculine theme at 24mm and the case is water-resistant to 1,000 metres – well into professional, saturation diving territory. While the standard and special edition cases seem identical, look closely and you’ll spot a subtle difference. The four hex screws at the corners have a different style on the new watches with smaller openings. It’s a curious, seemingly arbitrary change, but helps differentiate the models. 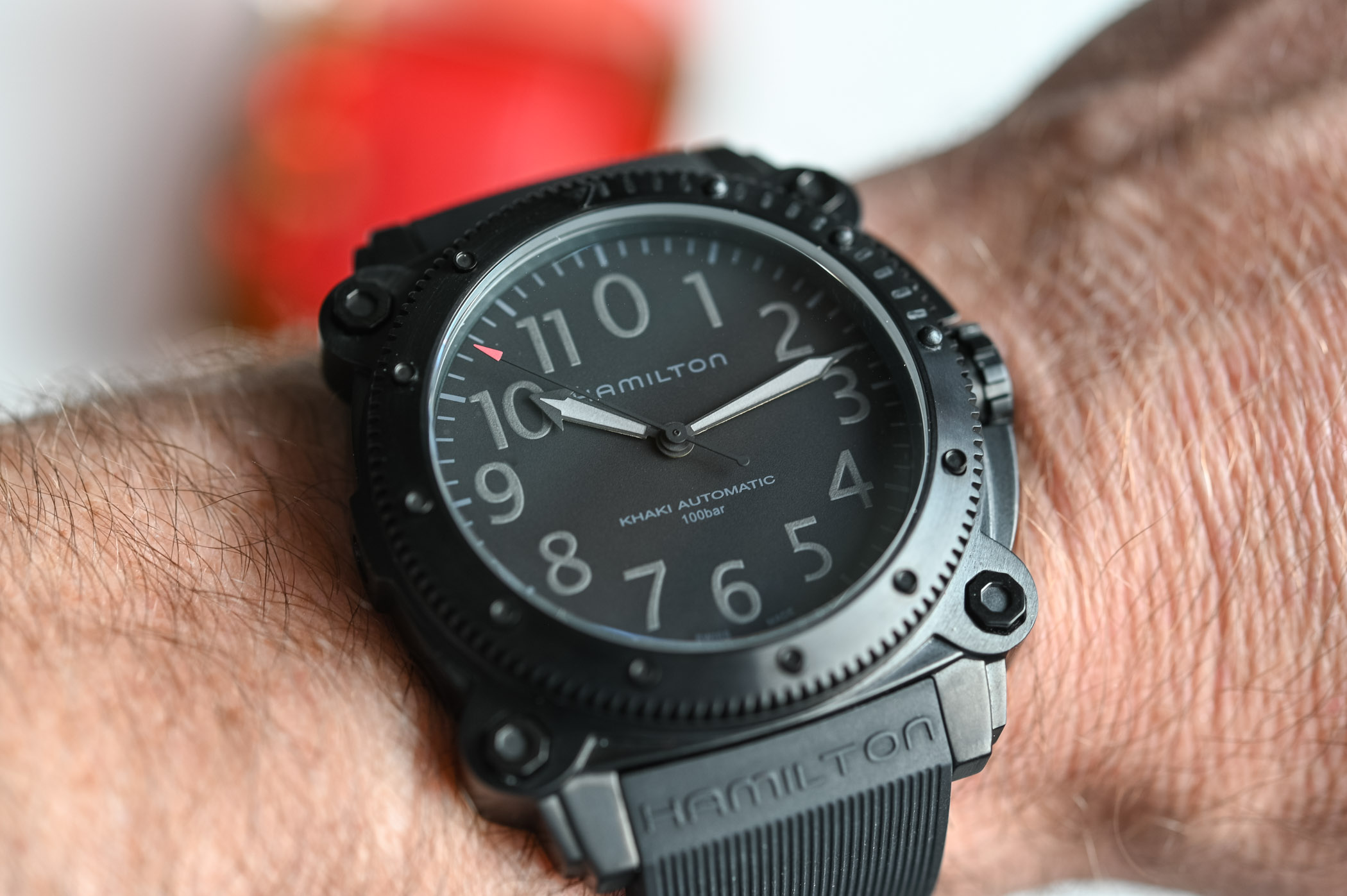 Like the case, the dials are nigh identical to the standard model as well, but the changes here are more conspicuous. The date window at 3 o’clock is gone, which I think makes for a cleaner design. The date’s bold white print popped a bit too much on the otherwise blacked-out dial, contradicting the stealthy vibe. The stylized black arrowhead hour hand and sword-style minute hand are the same, but sport lighter grey Super-LumiNova inserts, providing subtle yet appreciated contrast against the black dial (the standard model has an all-black hand variant). The dark oversized Arabic numerals are unchanged, ending with zero at 12 o’clock, but the double depth rating on the original – 3330ft/1000m – has been simplified to just 100 bar. The most important change is the tip of the seconds hand, which is now either red or blue and differentiates the two limited edition models. What does this mean? Again, we just don’t know yet, but each is a “reference to a key colour in the movie.” They look cool, though, and add a surprising amount to the aesthetic for such a small detail. 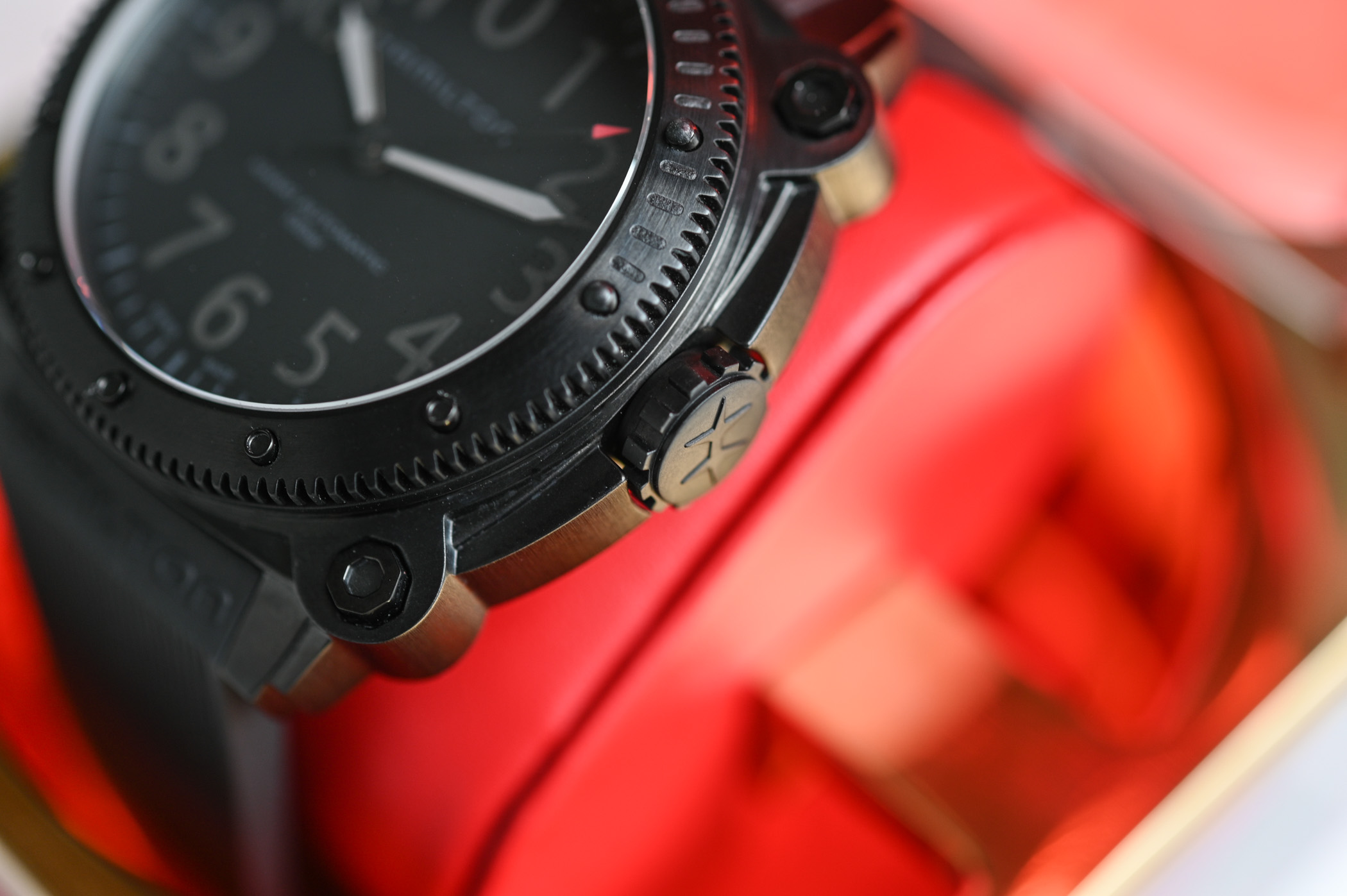 Powering the Khaki Navy BeLOWZERO Tenet Limited Edition models is Hamilton’s H-10 calibre, based on the ETA C07.111. This is another change from the standard model, which has an ETA 2826-2 with almost half the power reserve. The H-10 automatic has 25 jewels, beats at 21,600vph (3Hz) with an 80-hour power reserve. Functions include central hours, minutes, seconds and date at 3 o’clock, although some variants come without the date (the new dials do not have a date window). In contrast, the ETA 2826-2 has a higher beat rate of 28,800vph (4Hz), but a power reserve of just 42 hours. The almost doubling of the power reserve is a worthy compromise for the limited editions.

The black rubber straps are the same as before, coming in at 24mm with a 22mm wide buckle. Nathan Crowley was the movie’s production designer and also instrumental in the on-screen watch’s design, so it’s safe to assume he’s a fan of the standard Khaki Navy BeLOWZERO 1000m Auto. He designed the unique, Tenet-themed watch boxes as well, which have either a blue or red theme. The boxes sport a futuristic, transparent aesthetic with an inner red or blue sphere surrounded by a cube. You definitely won’t be tossing these in the trash. And here’s a fun fact, a second Hamilton model appears in the movie as well – the Jazzmaster Seaview Chrono Quartz. Pay close attention to the trailer and you’ll see it on the wrist of John David Washington. I can only guess that the high-tech BeLOWZERO model replaces it for tactical reasons.

Both models of the Hamilton Khaki Navy BeLOWZERO Tenet Limited Edition are available now and limited to 888 pieces with a retail price of USD 2,095 or CHF 2,100 (incl. VAT). The movie is expected to be released in the US in mid-August, but the timing is subject to change due to the ongoing pandemic. For more information and to make a purchase, visit Hamilton’s website.