Graham celebrates the 10th anniversary of its Tourbillograph, a chronograph/tourbillon combo housed in the brand’s cornerstone Chronofighter case. With its imposing 47mm dimensions, the weight of the case has been considerably lightened with the incorporation of a carbon case. A limited edition of 10 pieces, the dial of the Superlight Carbon Tourbillograph plays with a black and golden colour scheme.

This 10th-anniversary edition of the Tourbillograph belongs to Graham’s Chronofighter Superlight family of carbon case watches. Still, the brand’s best-selling model, the distinctive trait of the Chronofighter is the chrono trigger lever on the left side of the case. Inspired by a countdown bomb timer made for the Italian Air Force by Universal Geneve, you can read all about the genesis and evolution of the Chronofighter collection in Xavier’s in-depth article. 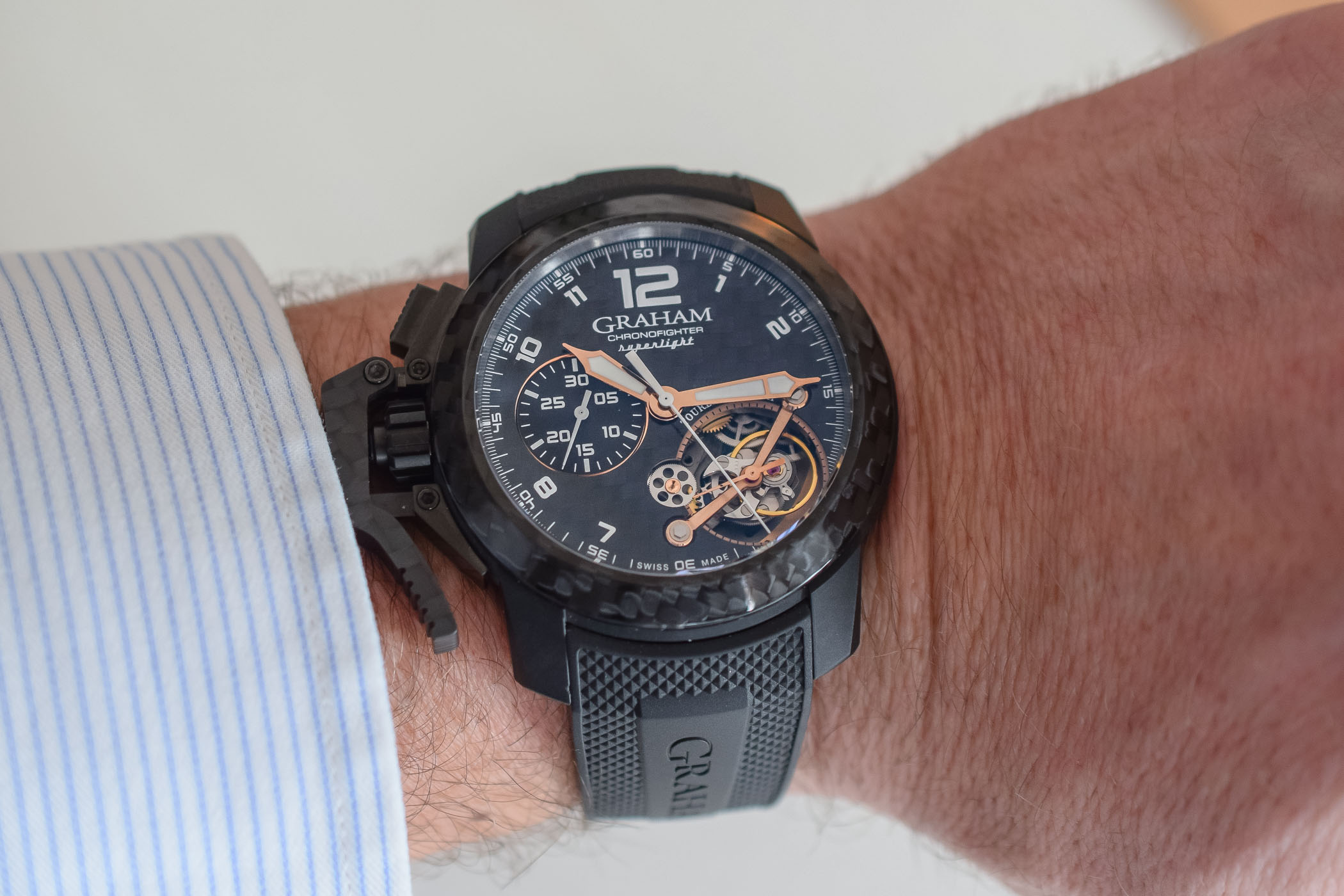 Using material associated with the world of motorsport racing, the case, the trigger, the bezel, the tourbillon cage, the dial, and the buckle are all made from a superlight black carbon composite. For a watch with a diameter of 47mm, the use of carbon translates into a total weight of just under 100g. The characteristic crisscross pattern of the carbon can be appreciated on the bezel, lever and dial. Adding a touch of rubber to the mix, the reset chrono pusher is covered with black rubber decorated with Clous de Paris for extra grip. Fitted with domed sapphire crystals on the dial and caseback, the water-resistance specs are rugged and the watch can take plunges of up to 100 metres. 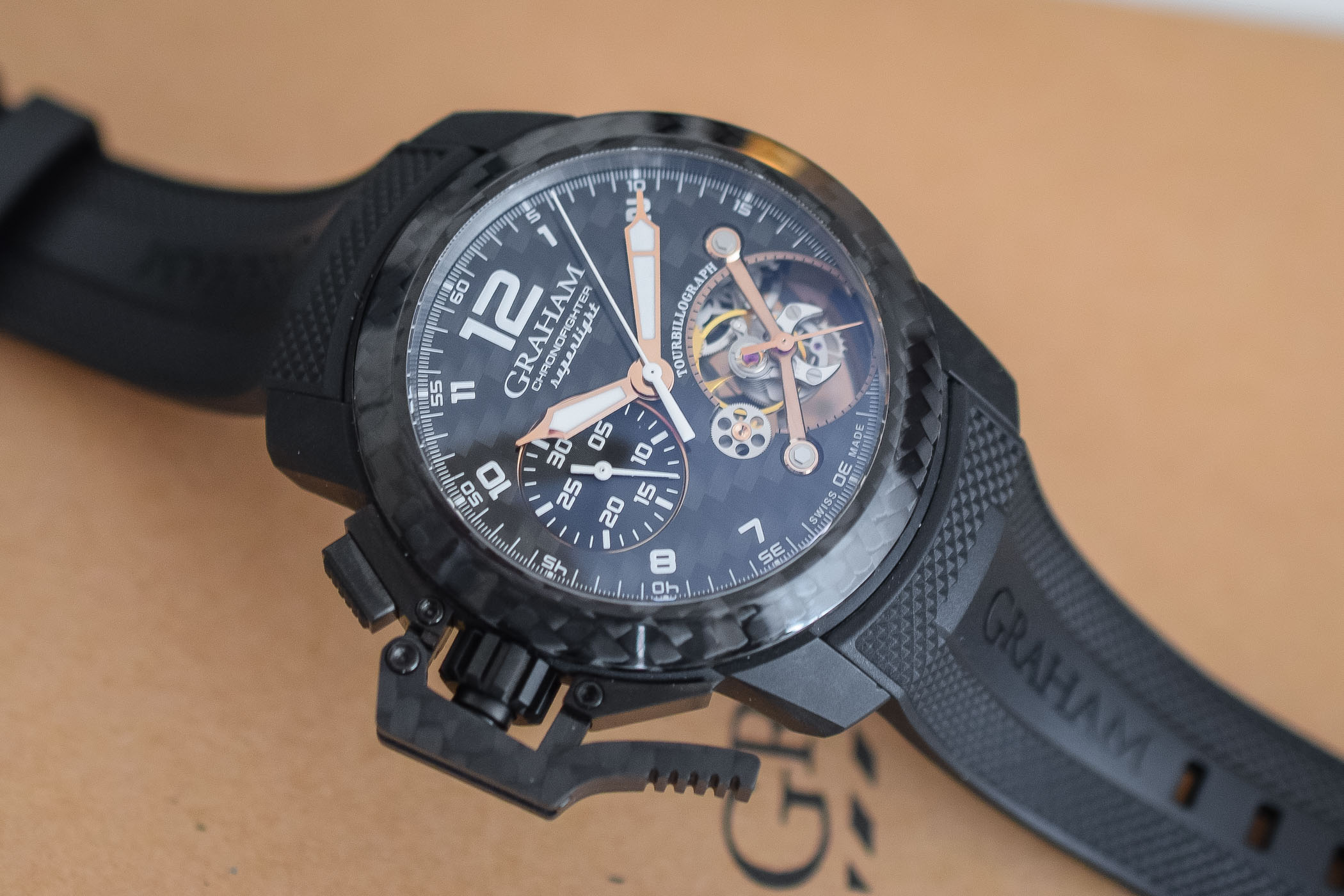 A traditional complication on board

The combination of a sporty chronograph with a traditional tourbillon escapement is not new. Many brands – like Audemars Piguet, TAG Heuer, Zenith and more – have taken this combo on board. Graham’s Tourbillograph showcases the tourbillon in an exceptionally large aperture between 4 and 5 o’clock and its construction is protected by two patents. The offset construction and the open cage of the tourbillon (weighing just 0.485g) allows a view of other wheels of the movement, which intersect with the orbital plane of the escapement. The two bridges over the tourbillon/small seconds have a bent shape to enhance rigidity and are ‘borrowed’ from the tradition of 18th-century English precision timepieces. The idea behind the 18k red gold bridges is to confer the tourbillon with a more rugged setting in keeping with the sporty nature of the watch. 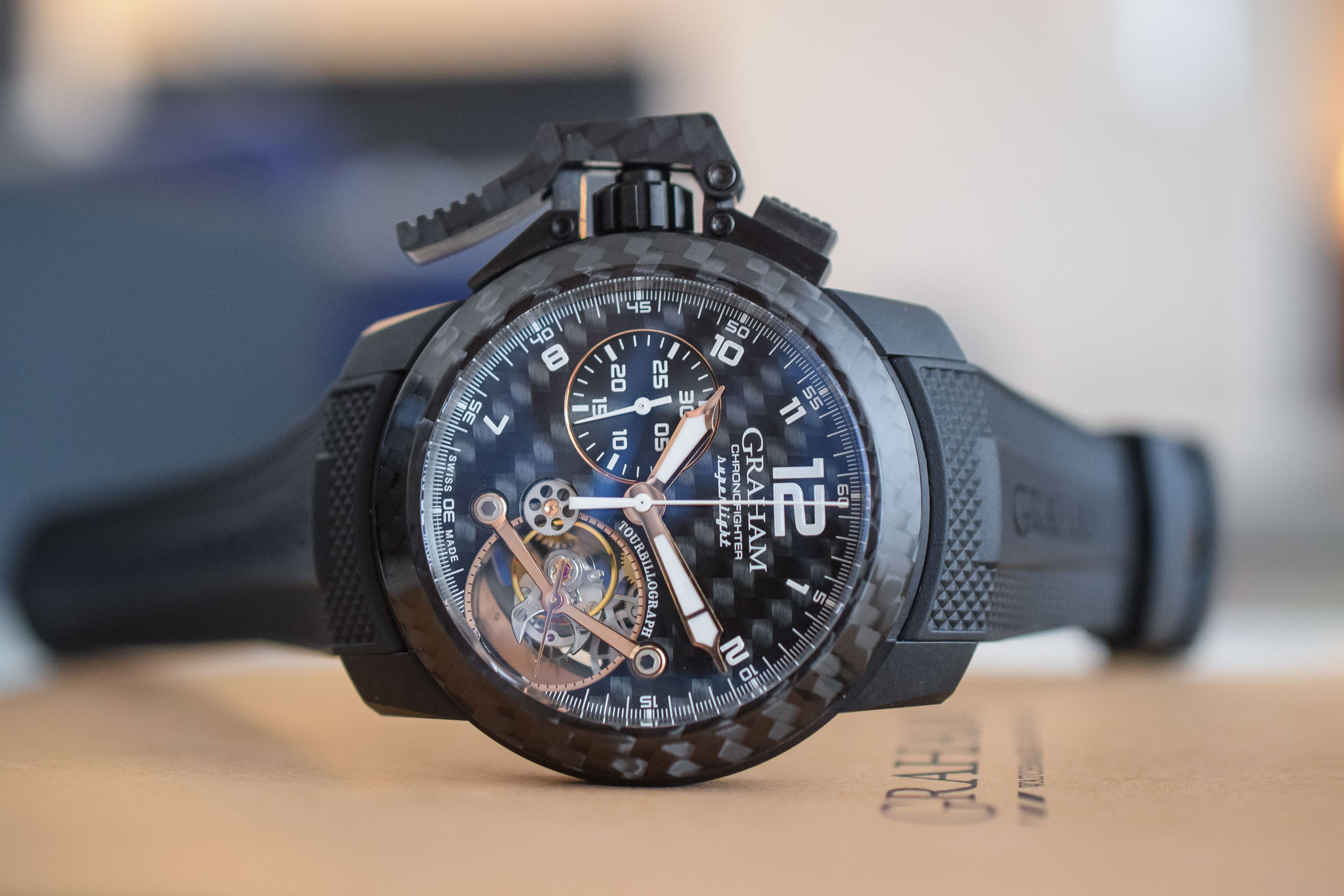 The 30-minute chrono counter occupies a more conventional position at 9 o’clock and, like the tourbillon aperture with its external small seconds counter, features a golden frame. The numerals, with a prominent Arabic number 12, are coated with white Super-LumiNova, as is the interior of the golden hour and minute hands. The central seconds hand is varnished in white.

The Chronofighter Superlight Carbon Tourbillograph is equipped with an automatic column-wheel chronograph and tourbillon movement. With a frequency of 28,800vph and a power reserve of 48 hours, the movement is protected with an Incabloc shock absorber. The tourbillon cage alone has 48 components, some of these made in 18k solid gold for stability. The gold and black colour scheme of the dial makes its way to the movement with its black gold skeletonised rotor with an 18k solid gold oscillating weight. The movement is finished with perlage, Geneva stripes and manually chamfered and polished edges. The movement also boasts a Chronofiable® Certification (like Richard Mille watches subjected to extreme impact). Unlike COSC certification that tests the precision of a watch, the Chronofiable certification tests the durability and wear and tear of a timepiece over an extended period of time on the wrist.

The Carbon Tourbillograph is a limited edition of 100 models and comes on an integrated black or white rubber strap decorated with a Clous de Paris pattern although canvas and leather straps can also be ordered. The watch retails for CHF 29,950. For more information, please visit www.graham1695.com.