Swiss brand Fortis is mostly known for its space-related chronographs, with the Official Cosmonauts range, instrumental, ultra-robust and purpose-built watches supplied to the Russian cosmonaut agency Roscosmos. In addition to watches certified for space travel, Fortis has supplied military squadrons around the world and is still specialized today in pilot’s watches. As a testimony of this, we’ll take a closer look at the Fortis Aeromaster Old Radium Chronograph, a slightly more civilian, less tool-ish take on the pilot’s chronograph. 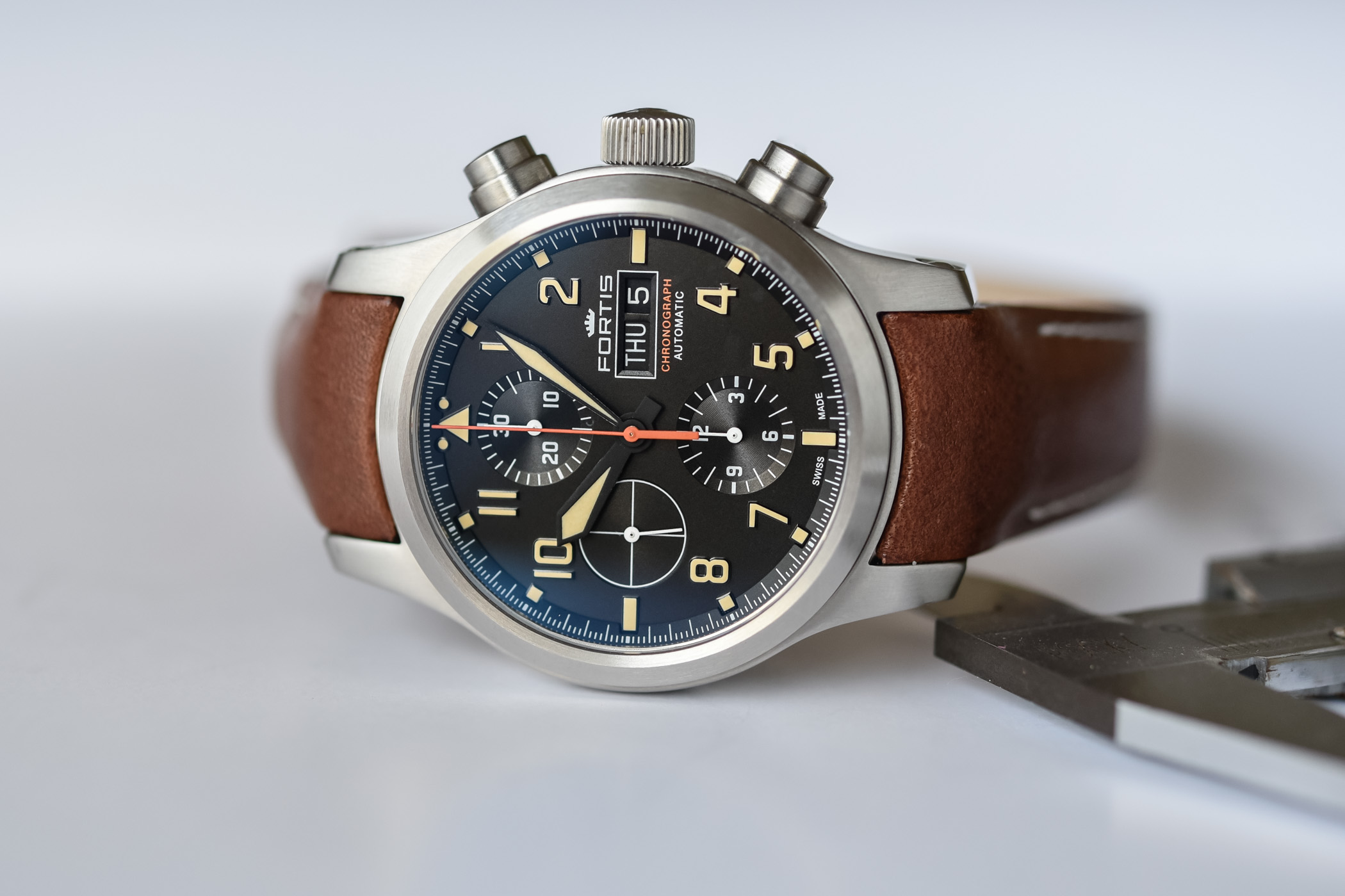 Fortis was founded in 1912 by Walter Vogt. Vogt’s idea was to design watches of outstanding qualities that would deserve the name Fortis or strong in Latin. Since then, the brand is known for its rugged, functional watches and for its long-lasting connection with aviation and space exploration. In particular, Fortis watches became part of the standard equipment for cosmonauts cooperating with Roscosmos, the Russian Space Agency (Editor’s note: the word Cosmonaut is used by the Russian Space Agency, for NASA it is Astronaut). The first Fortis Cosmonaut watch flew into space in 1994 as Russia was operating the MIR space station. A second version – again for Roscosmos, specifically as the ISS followed MIR – was designed some 10 years later.

But Fortis also has a long history as a supplier of elite squadrons, such as the Swiss 11 Fighters, Greek Hellenic Tigers, Hungary NATO forces, German Immelmann 51 or the Swiss Air Force aerobatics display team PC-7 team. For that, it has been involved in creating so-called Beobachtungsuhr (observation watches), which is the kind of watch we’ll be looking at today. Even though it is less instrumental than the Official Cosmonauts Chronograph, the present Aeromaster Old Radium Chronograph is first and foremost a pilot’s watch. 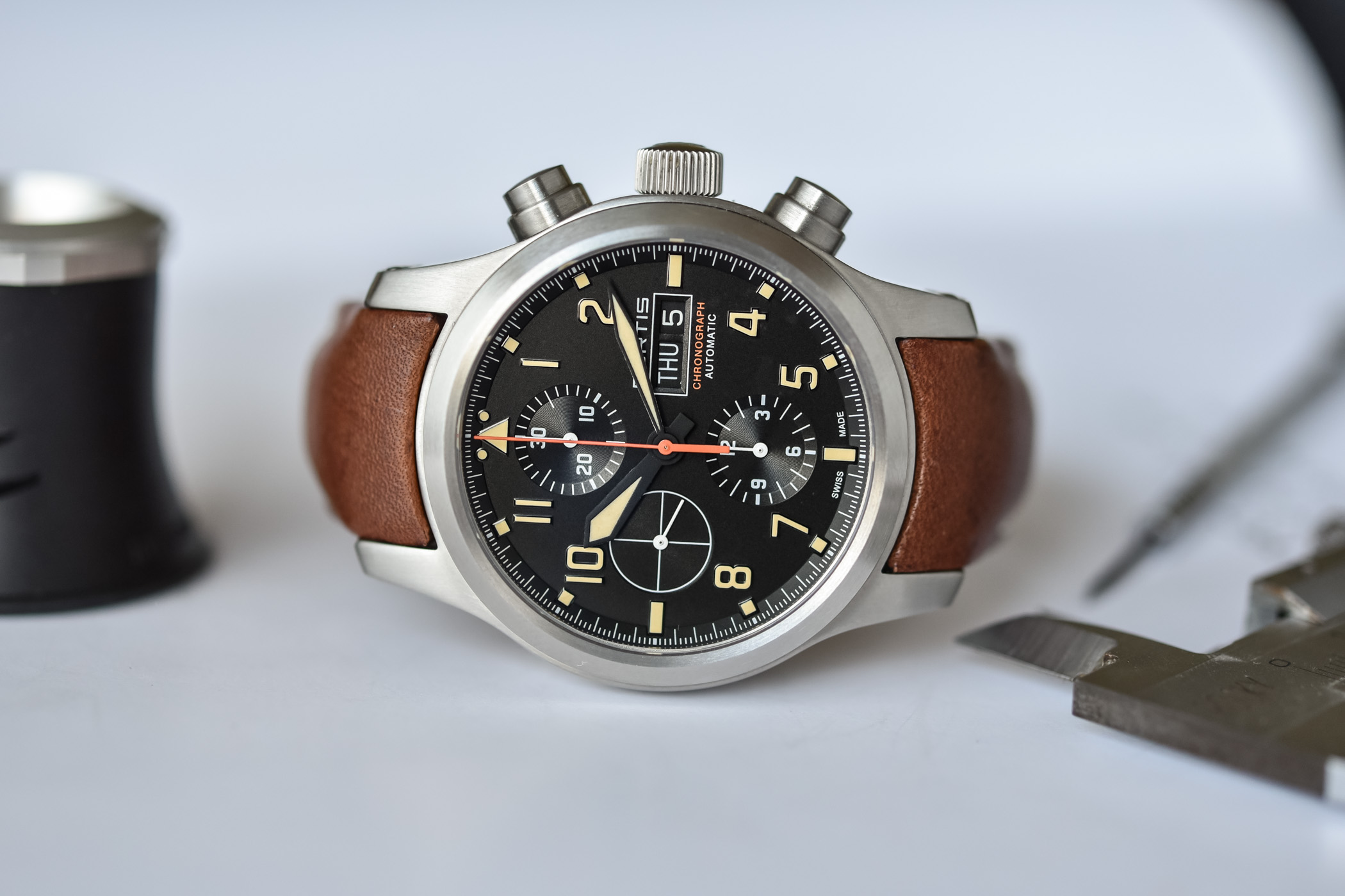 Visually speaking, the Fortis Aeromaster Old Radium Chronograph has most of the pre-requisites of a robust pilot’s watch and also shares a lot with its Cosmonaut siblings. The robust build of the case measures 42mm in diameter and is fully executed in brushed steel. Relatively high, with bulky lugs – which feature lateral screws – and with oversized pushers and crown, there’s no doubt about the aeronautical vocation of this watch. A good point for a pilot’s watch, it is rated at 200m when it comes to water-resistance – often an Achilles heel of such watches. Case-wise, the main difference between this watch and the Official Cosmonauts Chronograph is the absence of a rotating bezel, making this Aeromaster easier on a daily basis and less rugged visually. Not an elegant watch per se, but one that has more visual lightness. 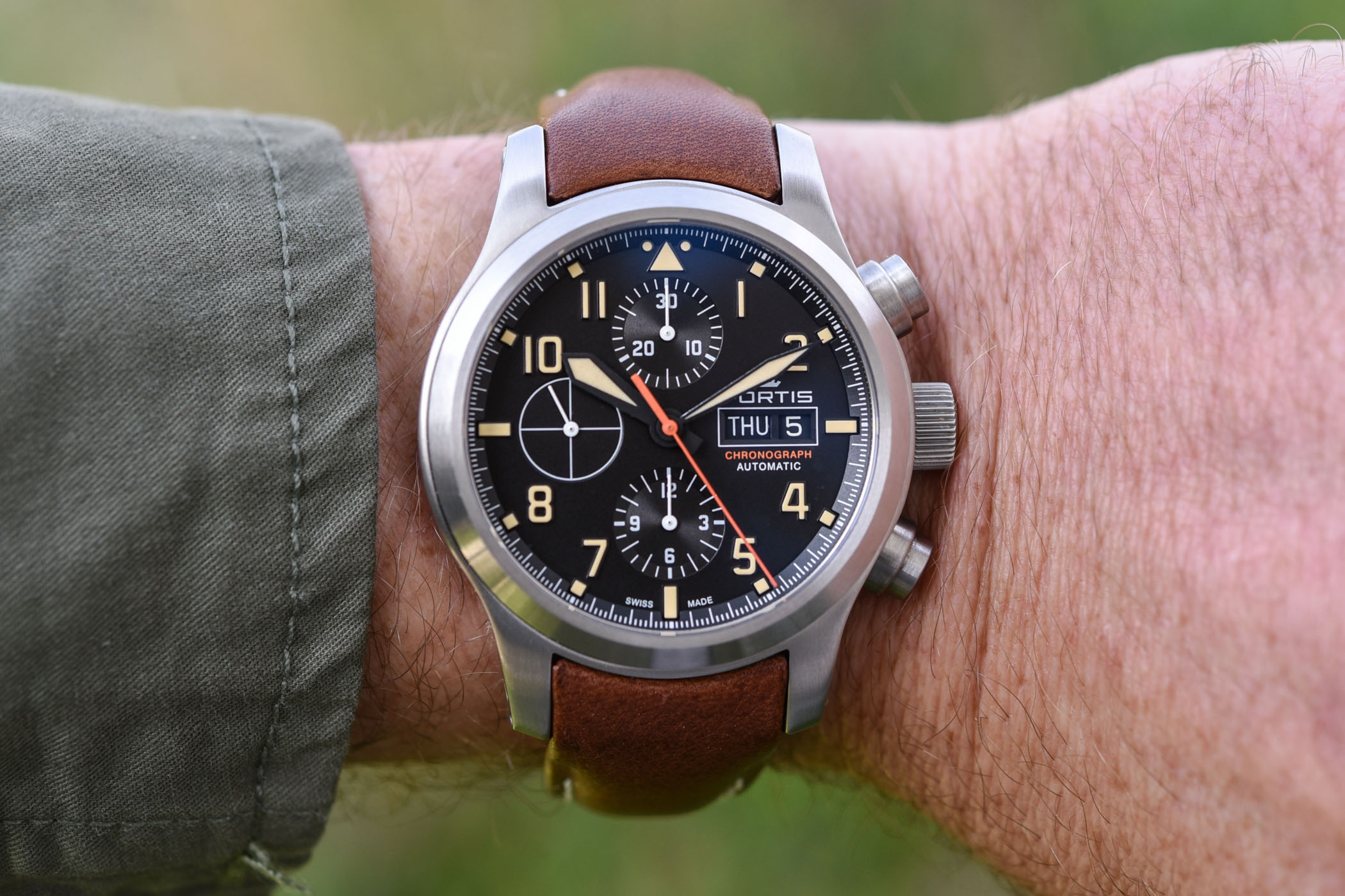 Despite the approximate 15mm height and the lugs that appear massive, the ergonomic shapes of the Fortis Aeromaster wear well on most men’s wrists. The strap, in a vintagey brown leather and its pleasant curved shape between the lugs, also adds to the comfort and makes it balanced. The watch has presence, no doubt about it, and has a nice instrumental feel reminiscent of 1990s Fliegerchronographs once produced by IWC. The quality of the build is very satisfying and the whole package feels sturdy and durable. 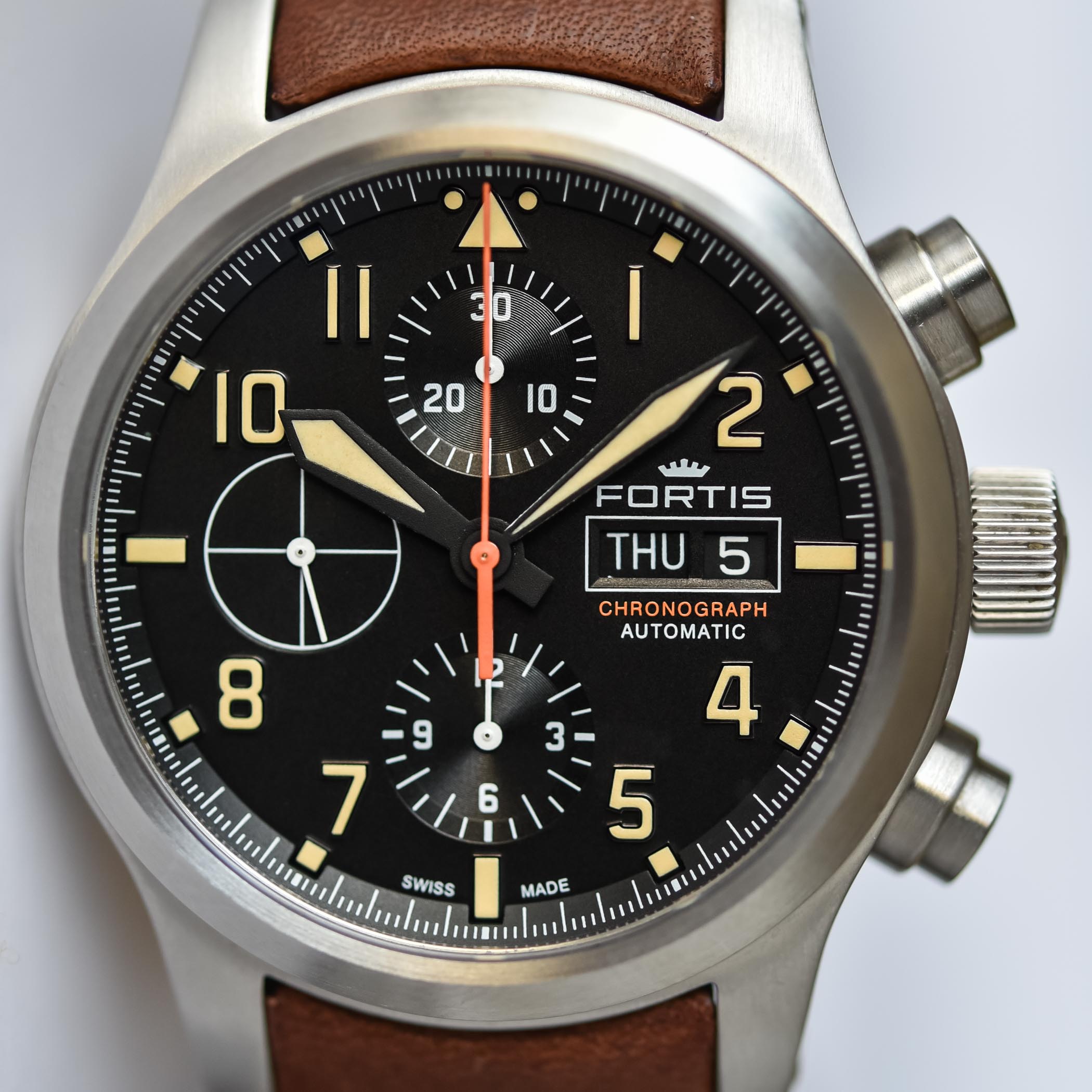 The dial of the Fortis Aeromaster Old Radium is the main difference compared to other watches in the collection. As for the case, classic B-Uhr and Flieger watch elements have been integrated, such as the propeller-shaped hands, the luminous Arabic numerals and the signature triangle and dots at 12 o’clock. The dial has a matte grained surface, effectively avoiding reflections, a generous amount of Super-LumiNova and, specific to this model, cream “Old Radium” indexes and hands – a warm and old-school colour that contributes a great deal to its appeal. The display is classic, with a 6-9-12 chronograph layout and a day-date window at 3 o’clock. 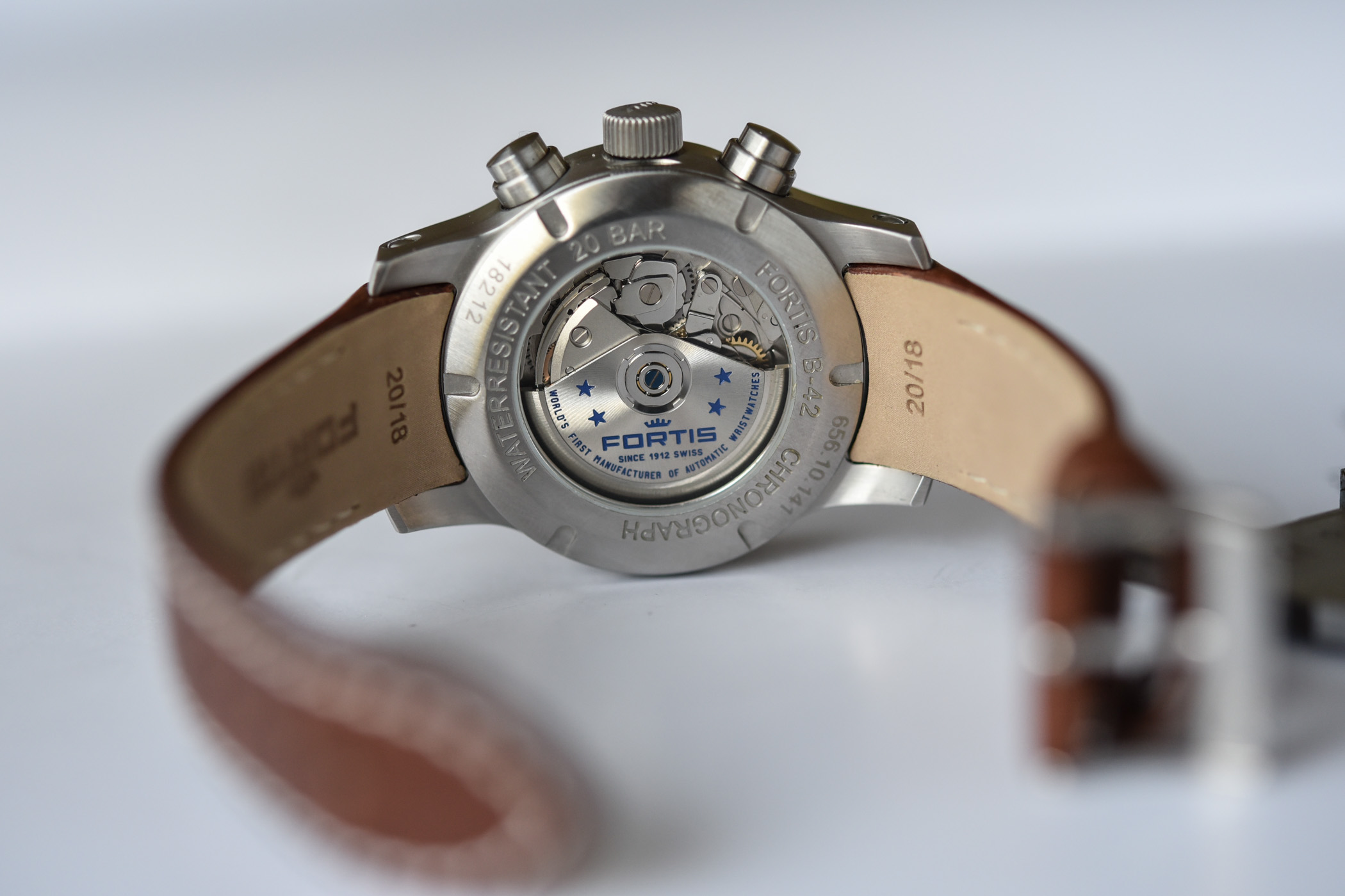 The back of the watch reveals a well-known, tried-and-tested movement based on the Valjoux 7750 ébauche. This automatic movement with cam-operated chronograph, used by so many brands in the Swiss industry, has nothing to prove anymore. It runs at 4Hz and provides 48h of power reserve. The decoration here is classic, with a personalized rotor with the Fortis logo and stars. 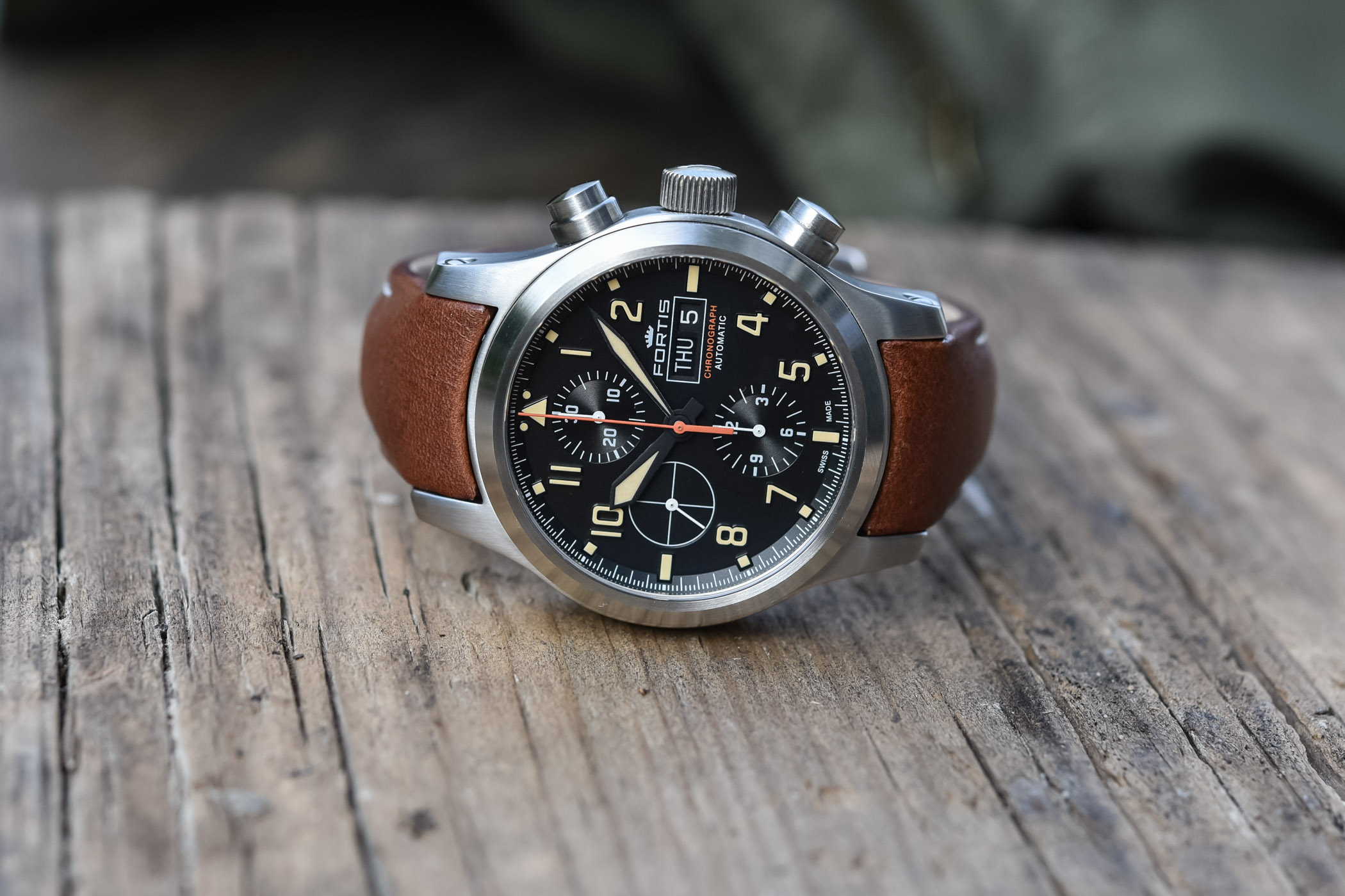 Altogether, Fortis presents a solid watch consistent with its pilot’s heritage and well executed. The watch is solid, well-proportioned, slightly easier on the wrist than those with a rotating bezel and the specific colour scheme of this “Old Radium” edition brings some charm and appeal. The Fortis Aeromaster Old Radium Chronograph is available from the brand’s online boutique here, at a price of EUR 2,940 or CHF 2,930.

Also note that a 3-hand, day-date Fortis Aeromaster Old Radium is also available, also in 42mm and with the same style for the dial, minus the sub-counters. It is priced at EUR 1,610 or CHF 1,600. 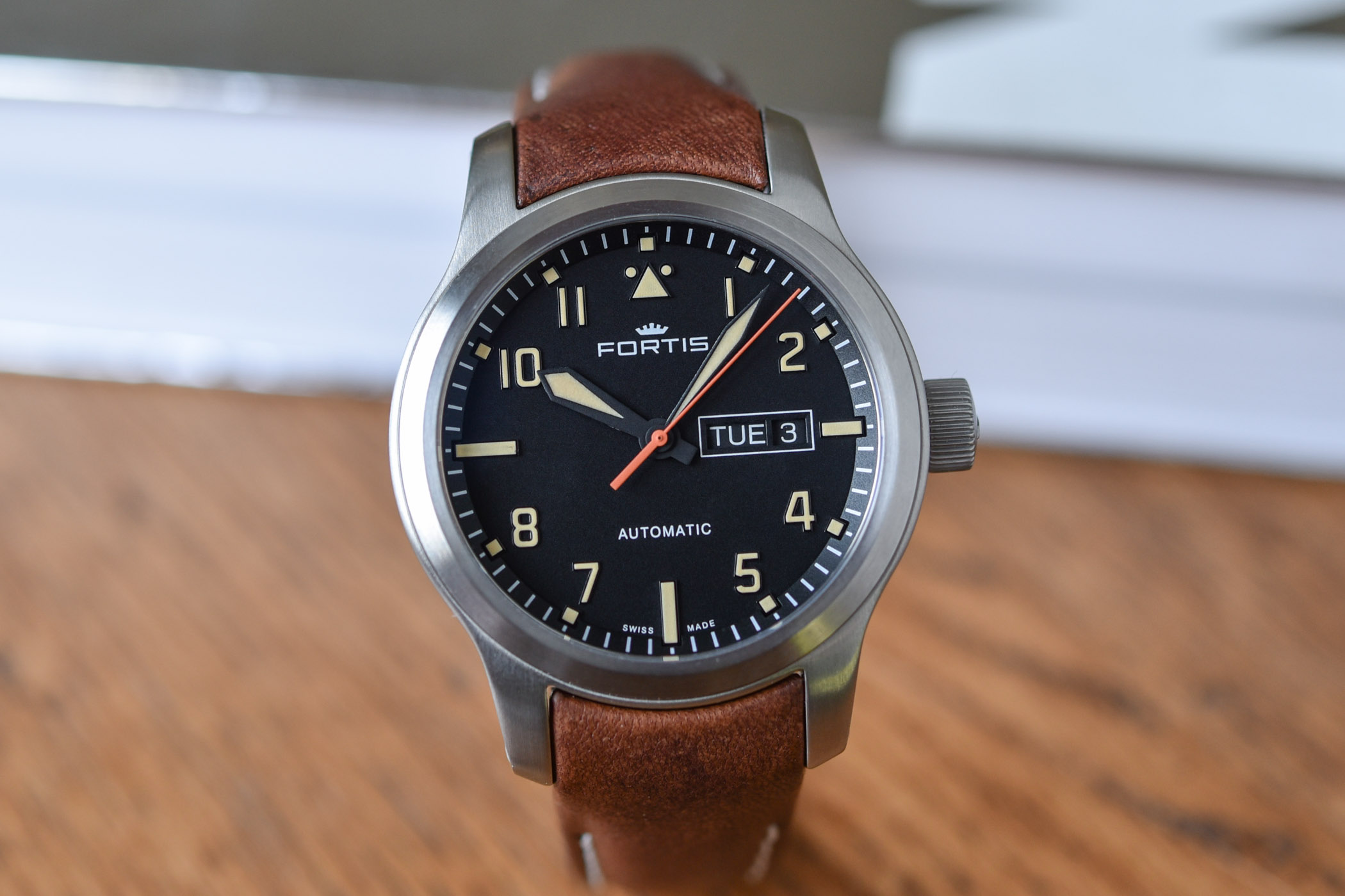