StartBloggers CornerHands-on – Does the New Zenith Elite Classic Live Up To its...

Hands-on – Does the New Zenith Elite Classic Live Up To its Predecessor?

The Elite Classic represents Zenith’s vision of the elegant dress watch. Being the less famous sibling of the El Primero movement, it was long overlooked. But earlier this year, the brand from Le Locle revealed its completely revamped take on the Elite. It was received with praise. As I happen to own the previous generation of this model, it was a great opportunity to compare both pieces. Is the new version also a better one?

Earlier this year, the Zenith Elite finally got the facelift it desperately needed. The most striking aspect of this renewed family is the stamped radial sunray pattern on the dial, giving the watches an expressive and dynamic face. Possible colours for the dial are classic, with options for blue, grey and white. Straps are available in the same colours and brown. It has been presented in time-and-date and with a moonphase complication, and it is available in both a gold and a steel case measuring 40,5mm. Prices start at CHF 5,900. 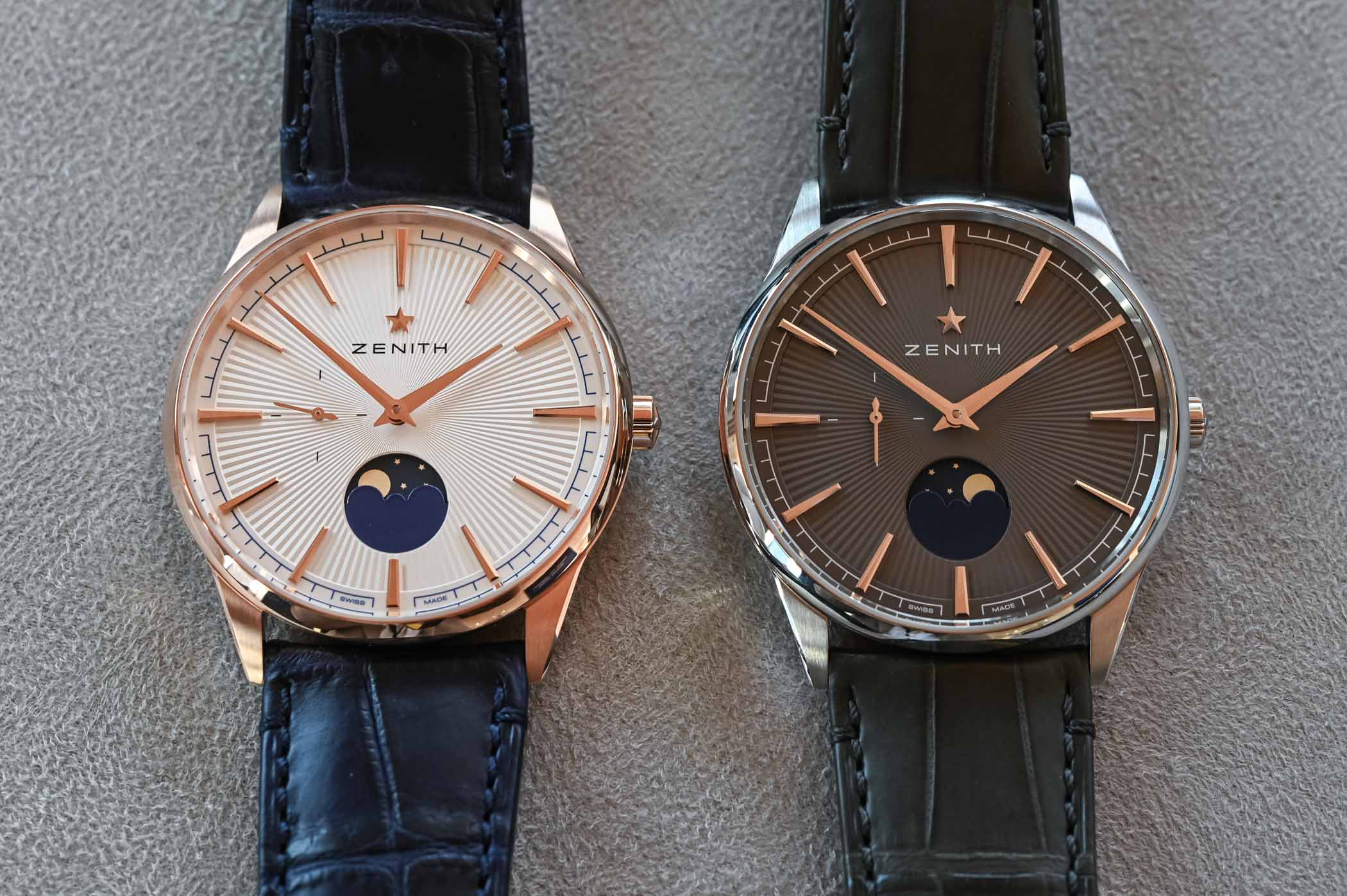 A brief history of the Captain

Any Zenith that is not an El Primero will always stand in the shadows of its more famous brother. But Zenith has not always been well-known for sports watches. Until way into the sixties, this manufacture was producing far more time-only movements and (pocket) watches. 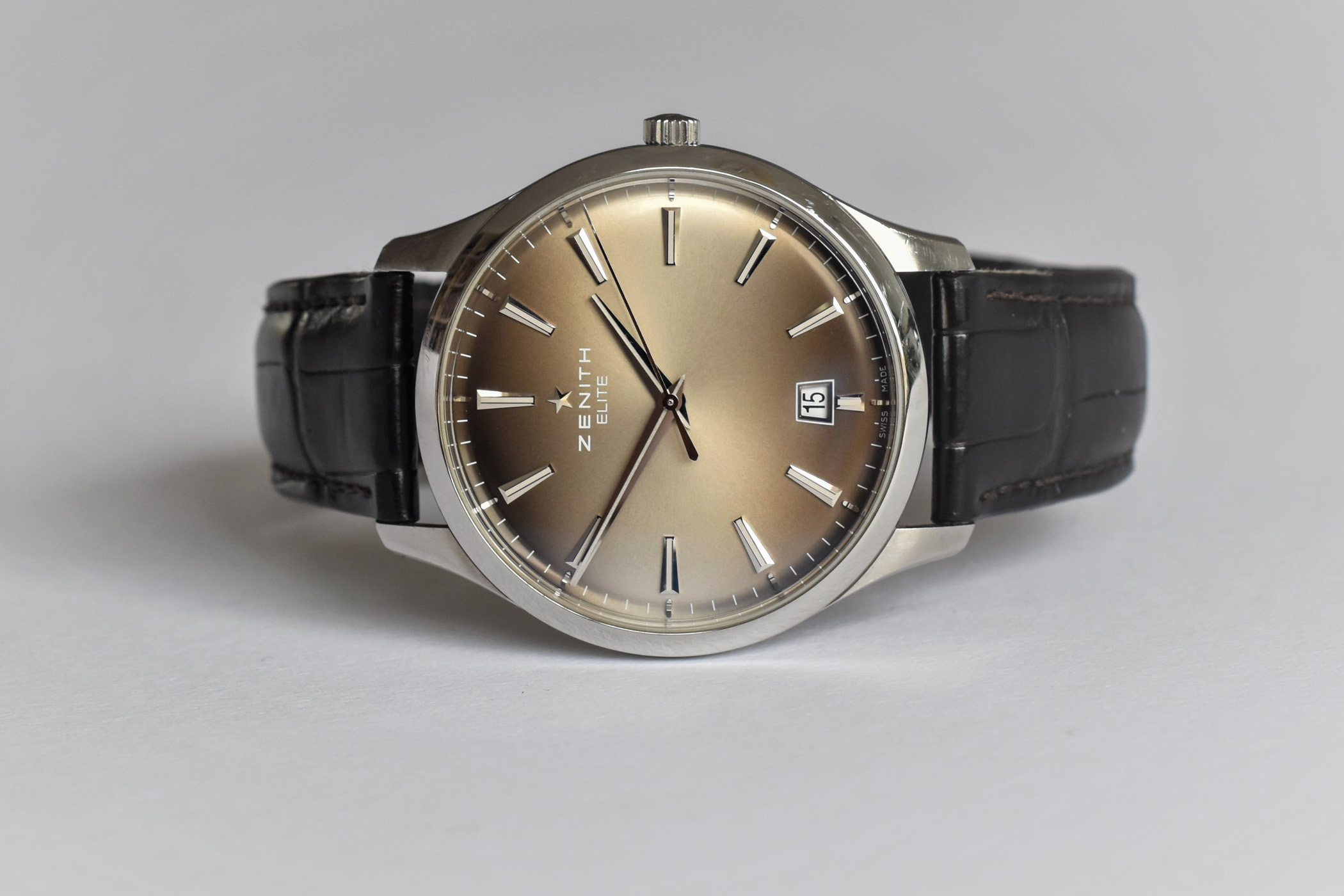 A 2014 version of the Zenith Captain Elite

One of them is the 1952 Captain. This is the direct predecessor of the Elite. My personal piece is called the Captain Elite; the last word in this name originally only referred to the movement. The Captain was initially meant to compete with the Omega Constellation and was already distinguishing itself with its modern elegance and nice finishing. It’s been in and out of the collection ever since, most of the time with mechanical calibres we would now call manufacture movements.

I bought my Zenith Captain Elite in 2014, shortly I was impressed by the watch after seeing it during a visit to Le Locle. During that visit, I spoke briefly to Jean-Frédéric Dufour before he left the company to become CEO at Rolex. He had been very involved in the creation process. The watch has been growing to me ever since, because it has quite a few distinctive yet understated design features. Its dauphine hands are quite modern, just like the applied baton hour markers. It has a thin bezel, thereby offering a great view on the dial. 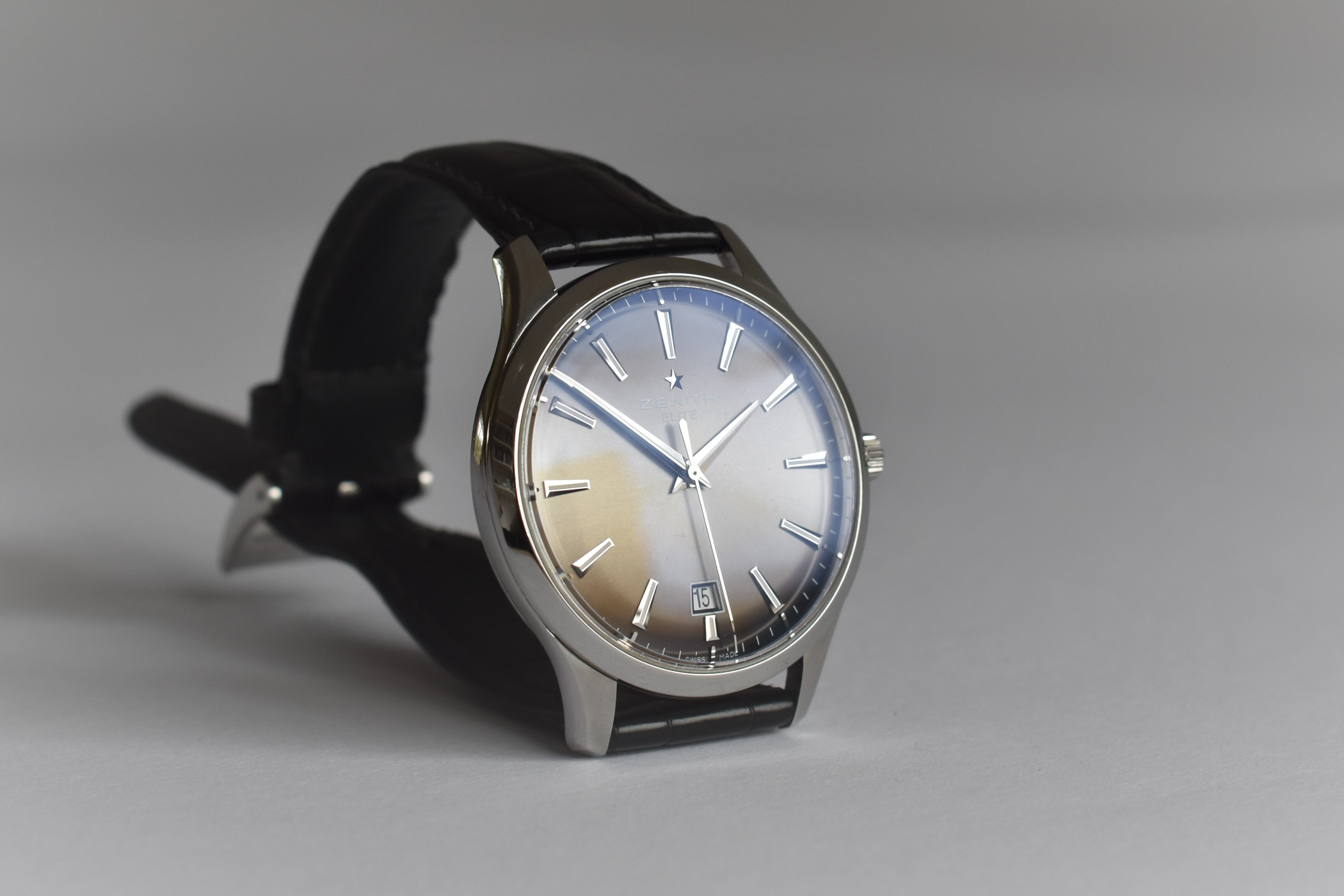 But what I especially like are the very well thought-over details about the dial. Above the elongated applied hour markers, there are smaller ones as well. The sizes of all hands are so perfectly aligned that they look like one large hand when they lay over each other. I chose the gradient dial, which was a bit of a gamble, I admit. 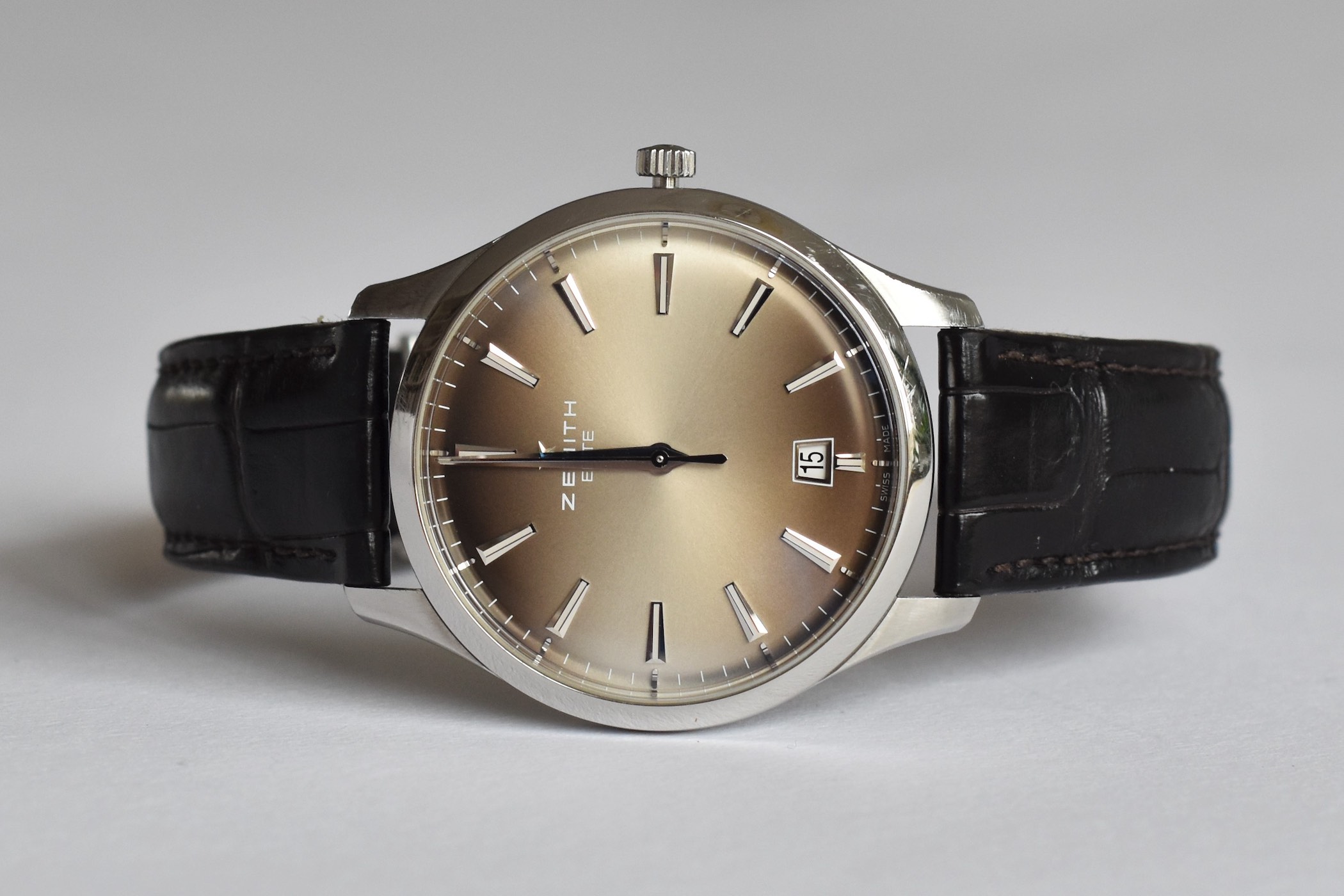 One other distinctive feature is the in-house movement that is nicely finished and which can be seen through the sapphire caseback. The case itself is nice and slim: 9,24 mm. If there’s only one downside here, I’d say that the movement is a bit too small for the case.

I like to wear it on practically all sorts of occasions. From a relaxed Sunday afternoon to regular day at the office to a cocktail party – my Zenith Captain Elite never seems to be out of place. It is, therefore, safe to say that this watch has grown out to be one of my favourites. It even got more wrist time than my vintage Speedmaster.

The new Zenith Elite really is evolution, not revolution. Which might not sound sexy, but it is the perfect approach to a rock-solid concept. On the wrist, it feels fresh, and not only because of the colours. The stamped radial sunray pattern on the dial really does its work: the watch feels more masculine and modern. The length of the hands is still excellent and it’s good Zenith didn’t make the watch any bigger. 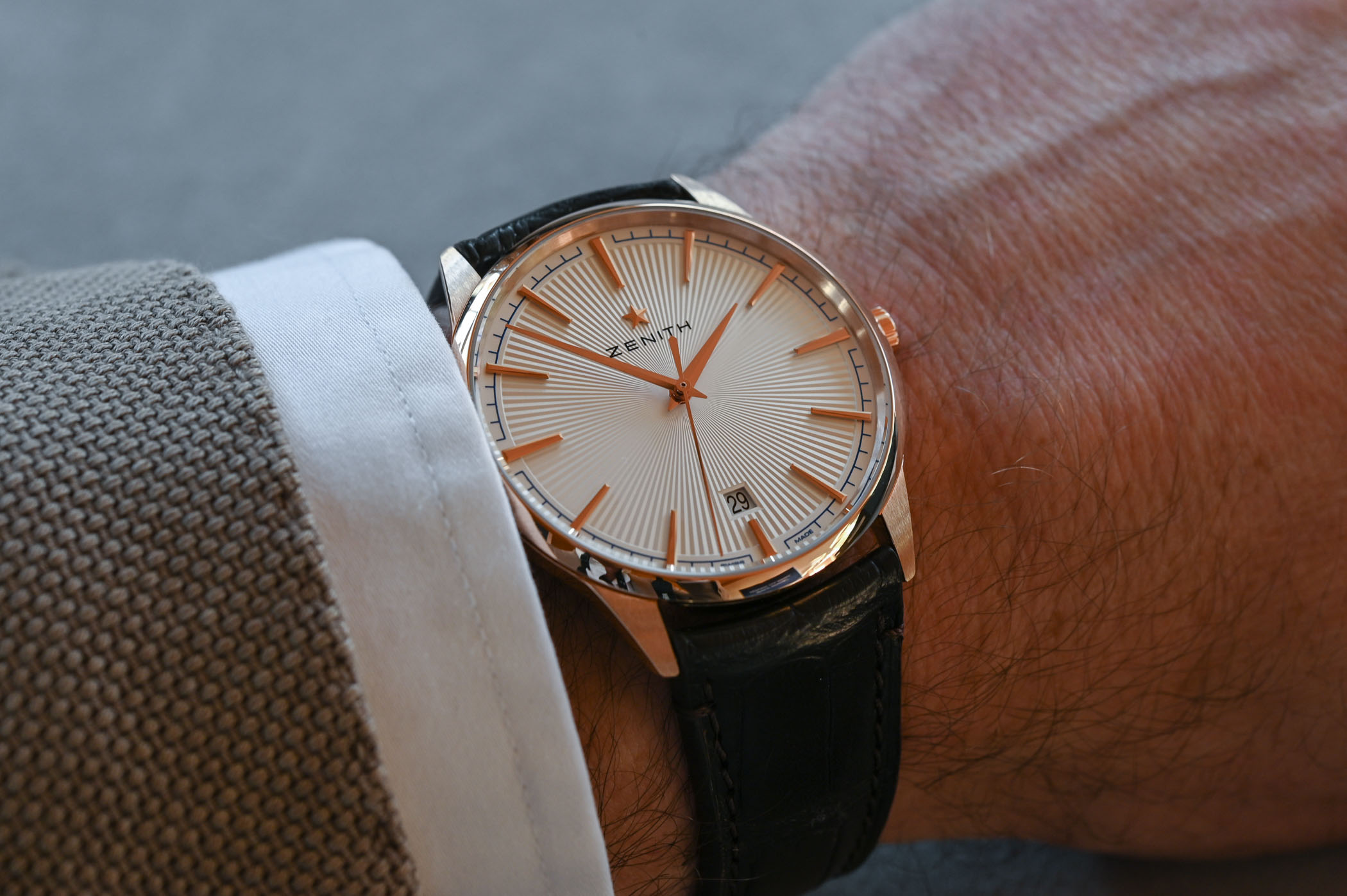 Turn the watch over, and the same familiar movement ticks inside. It has a slightly different rotor, but there’s not much difference in the finishing. The date window is still at six o’clock, and I’m happy they kept it. On this watch, it works very well.

A great yet sober in-house movement

It is worth mentioning that I never had any problems with this watch or movement. It is reliable and accurate. The quality is beyond any doubt to me.

Development of the movement started in 1990 and it was presented in 1994, both as automatic (cal. 670) and hand-wound (cal. 650). It was meant to be a modular ultra-thin automatic calibre that could be made 100% in-house. The Elite movement was even voted Best Movement of the Year at Baselworld 1994. The movement was first used in a dress watch called the Class and Zenith was so sure about its quality that it offered it with a five-year warranty.

The movement was not completely developed in Le Locle, though. Richemont’s head of movement creation Carole Forestier once told me that she co-developed the movement during her studies while working at Conseilray. This company did more development work for watch companies, before going out of business in 2014. 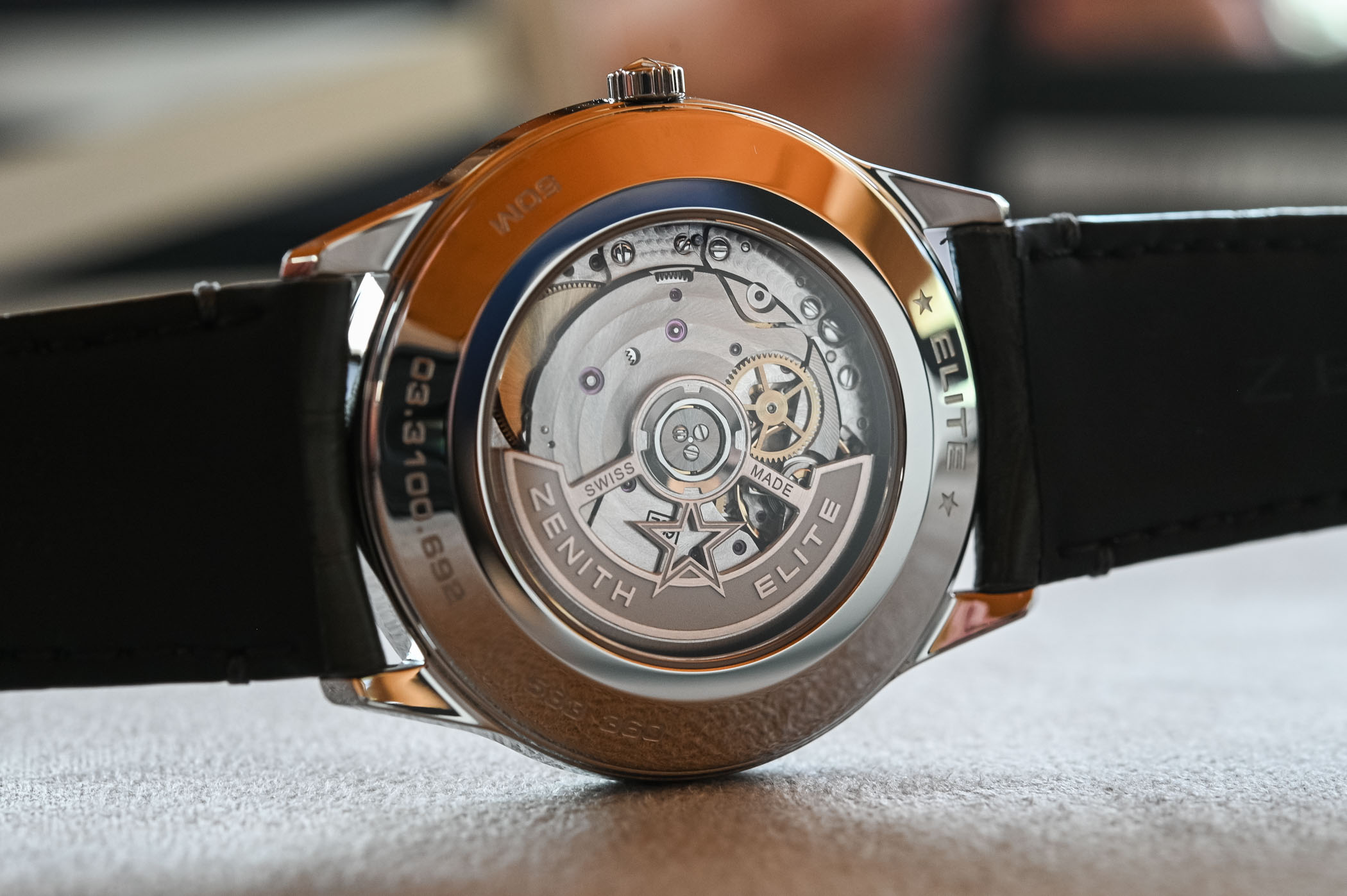 The Calibre 670 is reliable, functional and quite good-looking for a basic automatic movement. Expect decent and not too flashy specs: automatic, 50h power reserve, 28,800 vibrations/hours, three hands and a date window – and an additional moon indication wit small seconds on the more complicated version.

The finishing of the movement is elaborate, with a combination of perlage, Geneva stripes and circular graining. The layout of the movement is also beautifully done; all main organs can be viewed at work. The new model also benefits from a redesigned oscillating mass that gives more visual appeal to the caseback – but the movement still feels too small for the case.

So to get back to the first question, how does the new Elite Classic live up to these high expectations? It’s all evolution, no revolution here and that fits the model very well. I think Zenith did a real good job revitalizing this piece. It deserves a place in the collection, and the model is the fruit of a long tradition of making modern yet classic watches. 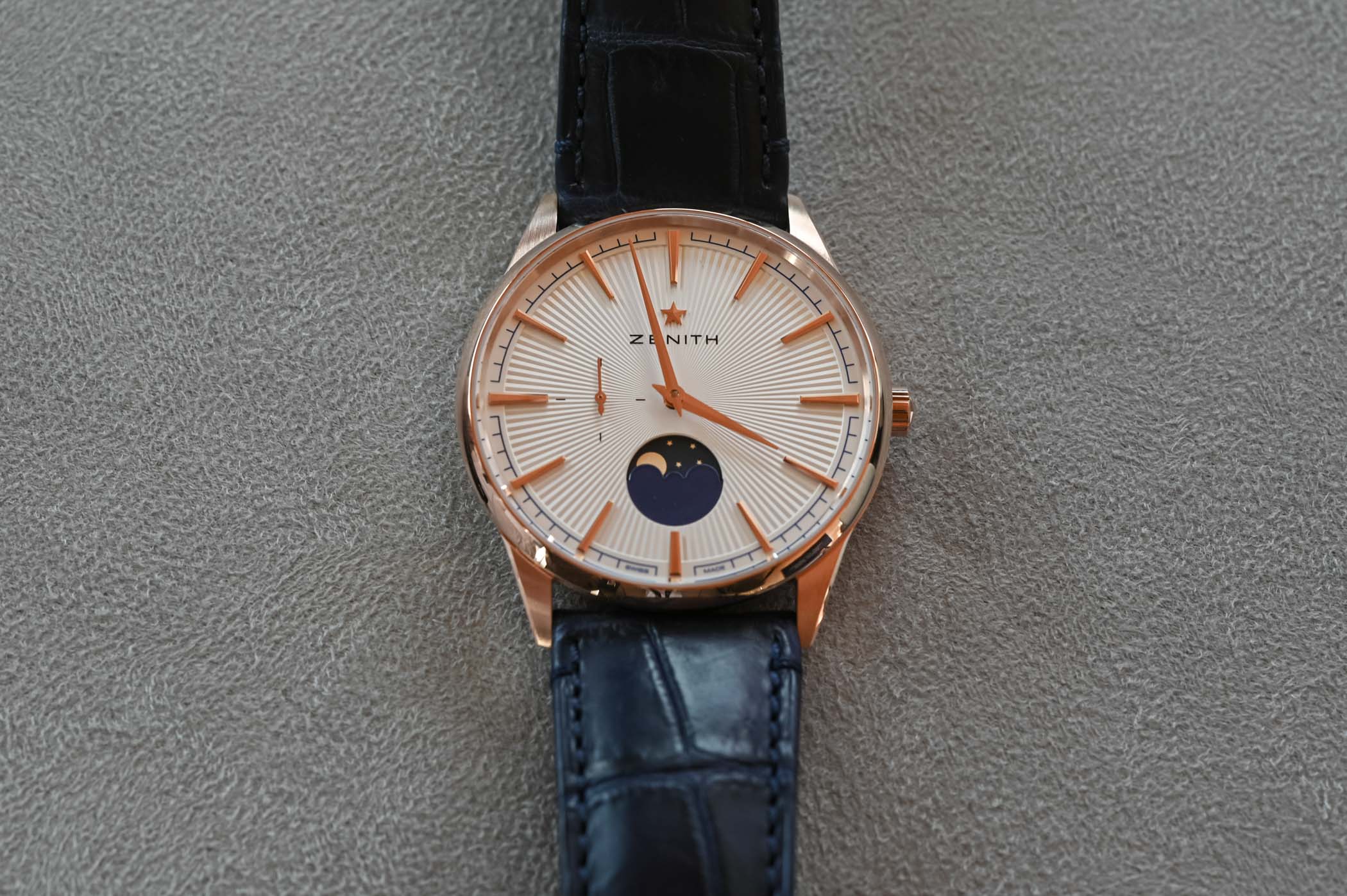 The new Zenith Elite is more contemporary, has fresher colours and it is more expressive. Zenith kept the strong points of this watch (great movement, good design, great proportions) and it in a typically understated yet intelligent way. The only thing that could bother me is the position of the date… It could have been simply removed. And price-wise, it also has some arguments. The Zenith Elite Classic in steel costs CHF 5,900 and the MoonPhase model costs CHF 6,900, which is a good price for this very complete and competitive package. More details at www.zenith-watches.com.