The difference a dial colour and a strap can make… Yes, such details can drastically change a watch, or at least this can add another (thick) layer of coolness. Alongside the technically desirable Manero Peripheral, the Carl F. Bucherer Manero Flyback has always been one of our favourites amongst this collection. Yet, it was before the addition of cool retro-inspired details, as this watch now becomes even more pleasant. Meet the new rally-oriented version of the Carl F. Bucherer Manero Flyback.

Until now, the Carl F. Bucherer Manero Flyback was a very nice, slightly vintage-inspired chronograph – a sort of modern take on 1940s chronograph – more on the dressy side than on being a true toolish chronograph. Nothing wrong with that, as a chronograph doesn’t necessarily have to be a motorsports instrument or a watch made for the Moon. A chronograph can also be a dress watch. Yet, Carl F. Bucherer watches could sometimes benefit from a bit more eccentricity, from just a small amount of cool factor that is missing. The Manero Flyback with rally/retro-style is 95% equal to the previous models, but the 5% difference is just what it needed to become desirable.

With its bi-compax display and its (sort of) sector dial framed by a tachymeter scale, the Manero Flyback adds discreet but well-dosed vintage accents to an overall contemporary package. Indeed, its case is rather large, the movement is modern, the dial is clearly more focused on elegance than on functionality and the final product is more formal than casual – in short, a luxury chronograph. By just changing the dial and the strap, Carl F. Bucherer brings its chronograph in another dimension, with cool retro flair and vintage rally inspiration. 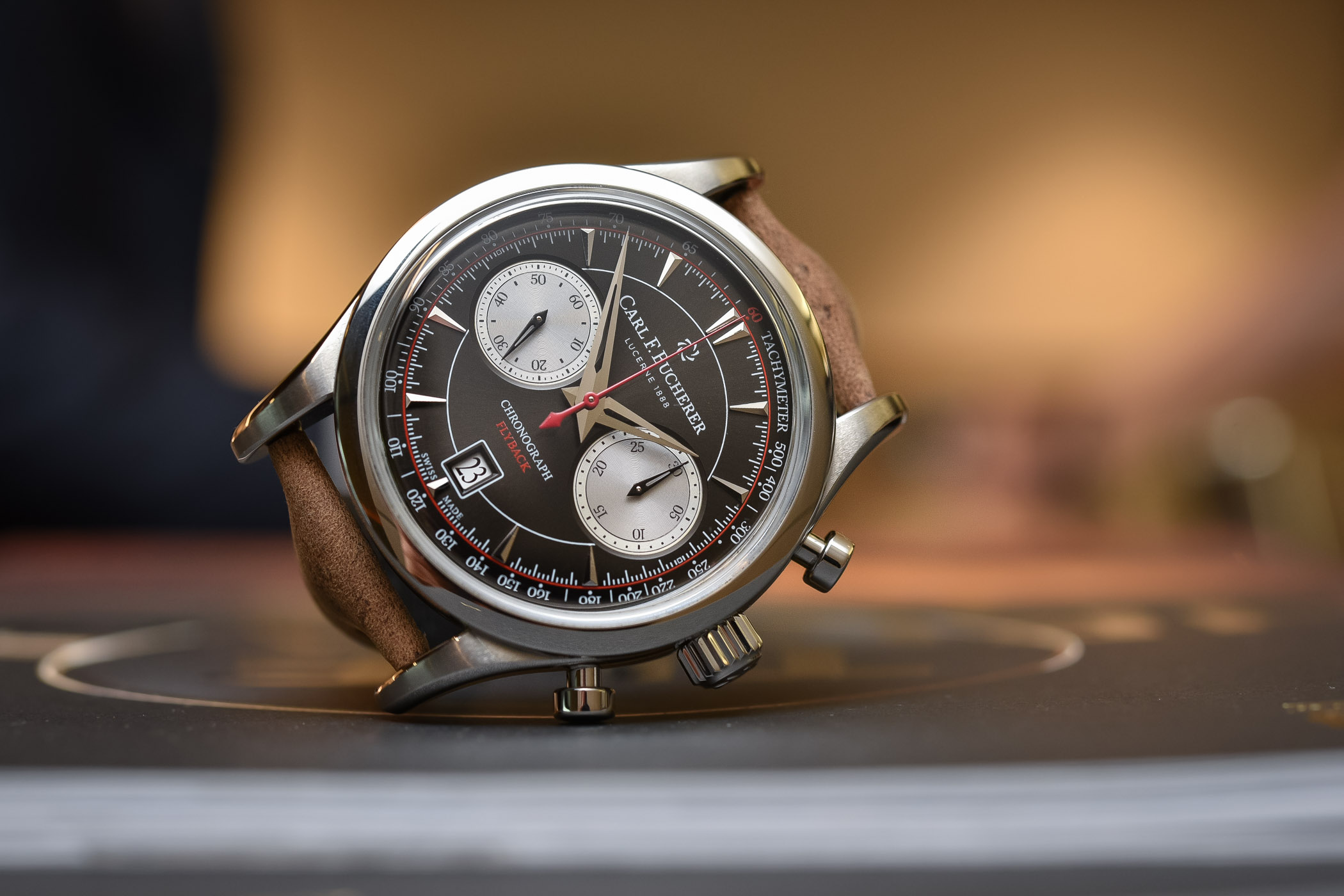 The case of this new Manero Flyback remains equally shaped and sized. Made of stainless steel, it measures a robust 43mm in diameter and just under 15mm in height. However, it is not a tool watch either, as some of the design choices prove. As always with the brand, some nice details can be seen all around, such as the large polished bevel running from one lug to another. The flat surfaces are satin-finished and the flat bezel – again a node to 1940s chronographs – is polished. A thick domed sapphire crystal and large mushroom-type chronograph pushers complete the package. The lugs are rather long but highly curved, helping the watch to hug the wrist. Vintage flair with modern proportions. 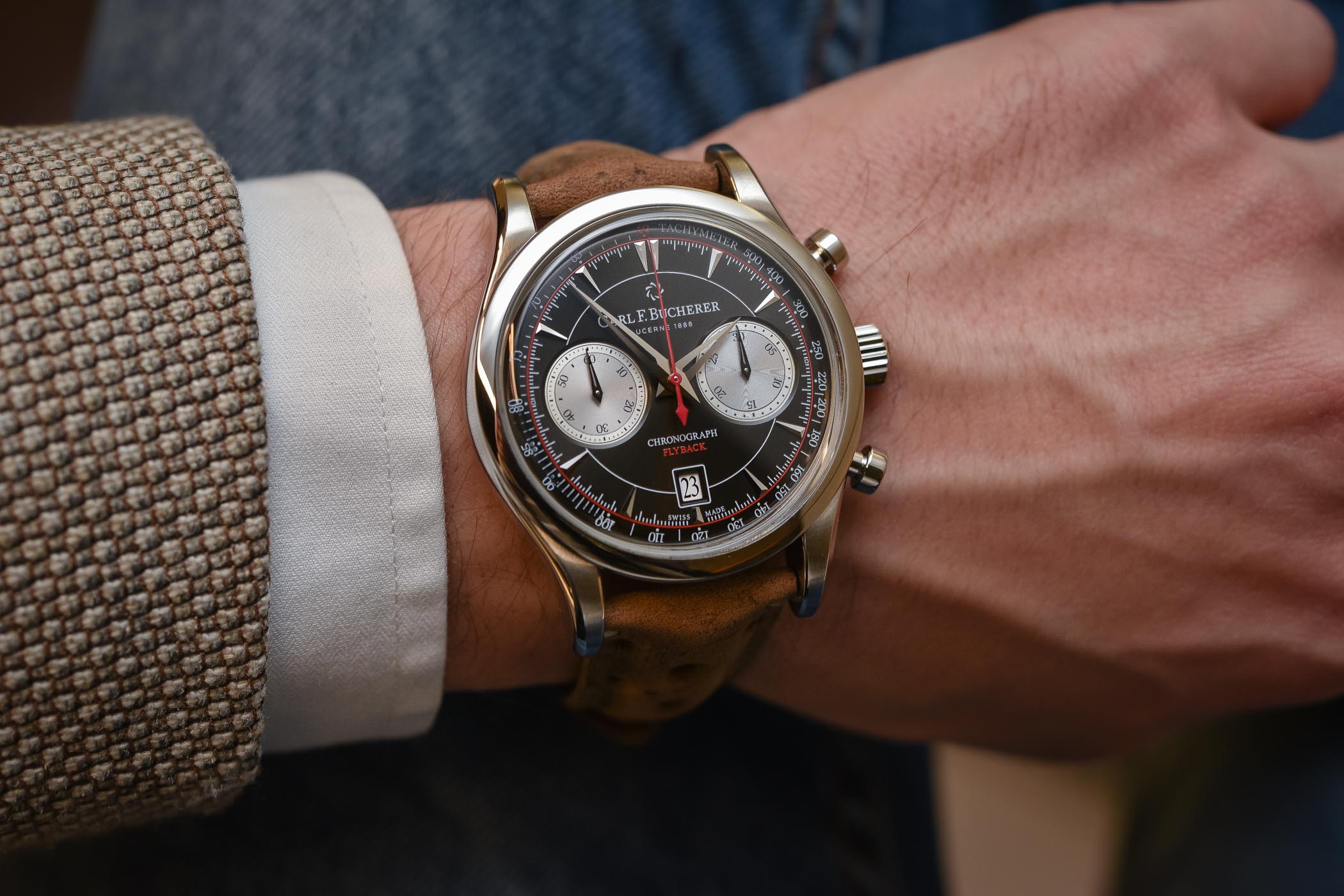 Inside the case, we find back the same movement – calibre CFB 1970. This integrated automatic chronograph movement isn’t an in-house engine, yet it remains an interesting one on several aspects, as it is controlled by a column-wheel and features a flyback function (the retour-en-vol, allowing to stop-reset-start the chronograph by only pressing one the pusher at 4). Based on the super-reliable 7750 architecture, it is later highly modified by La Joux-Perret. 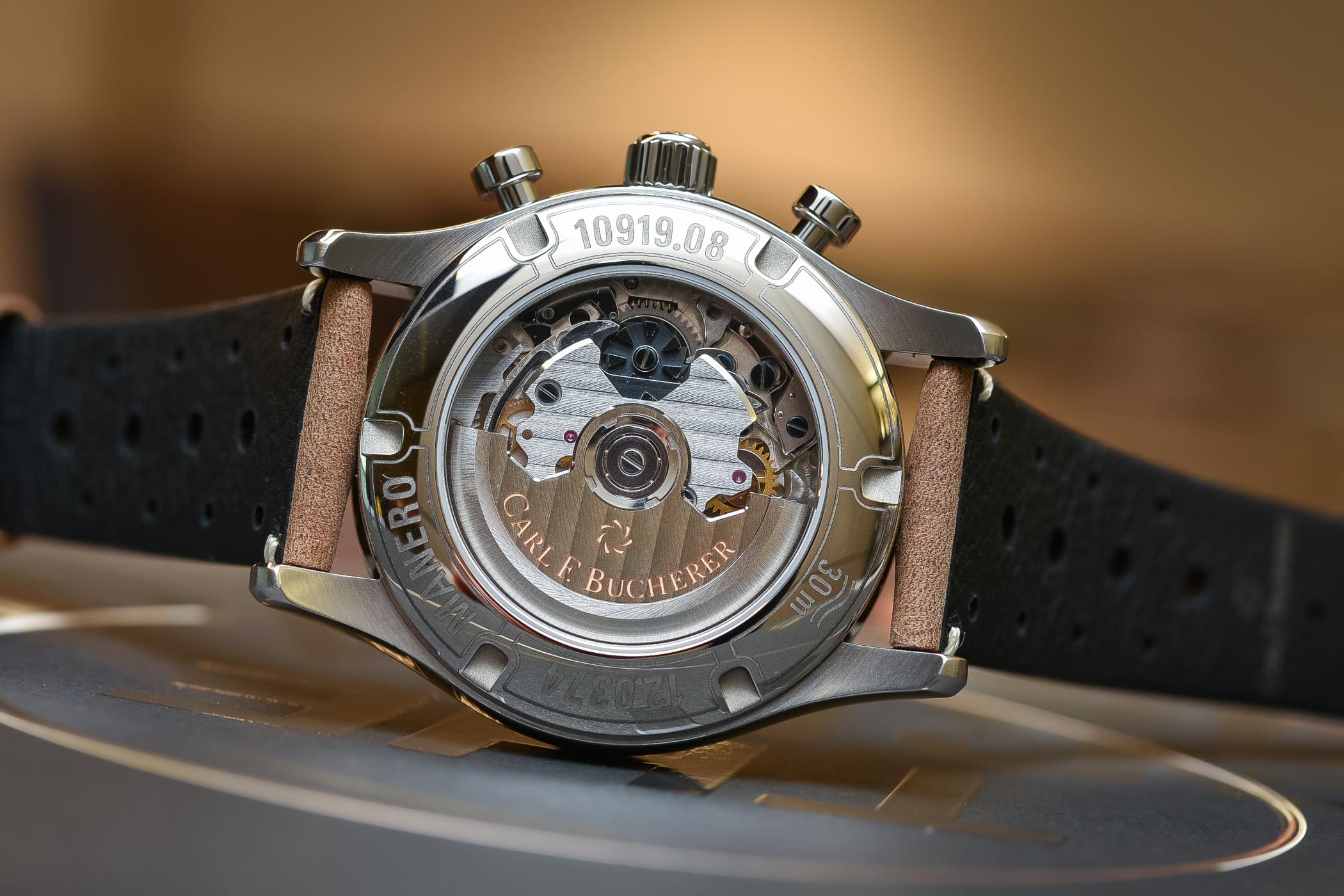 Most of the crucial parts are visible through the caseback (blued column-wheel, levers and gears of the chronograph). The movement is exclusive to the brand. It has an automatic winding, ticks at 4Hz and boasts 42h of power reserve. it is finished with Geneva stripes and specific rotor. 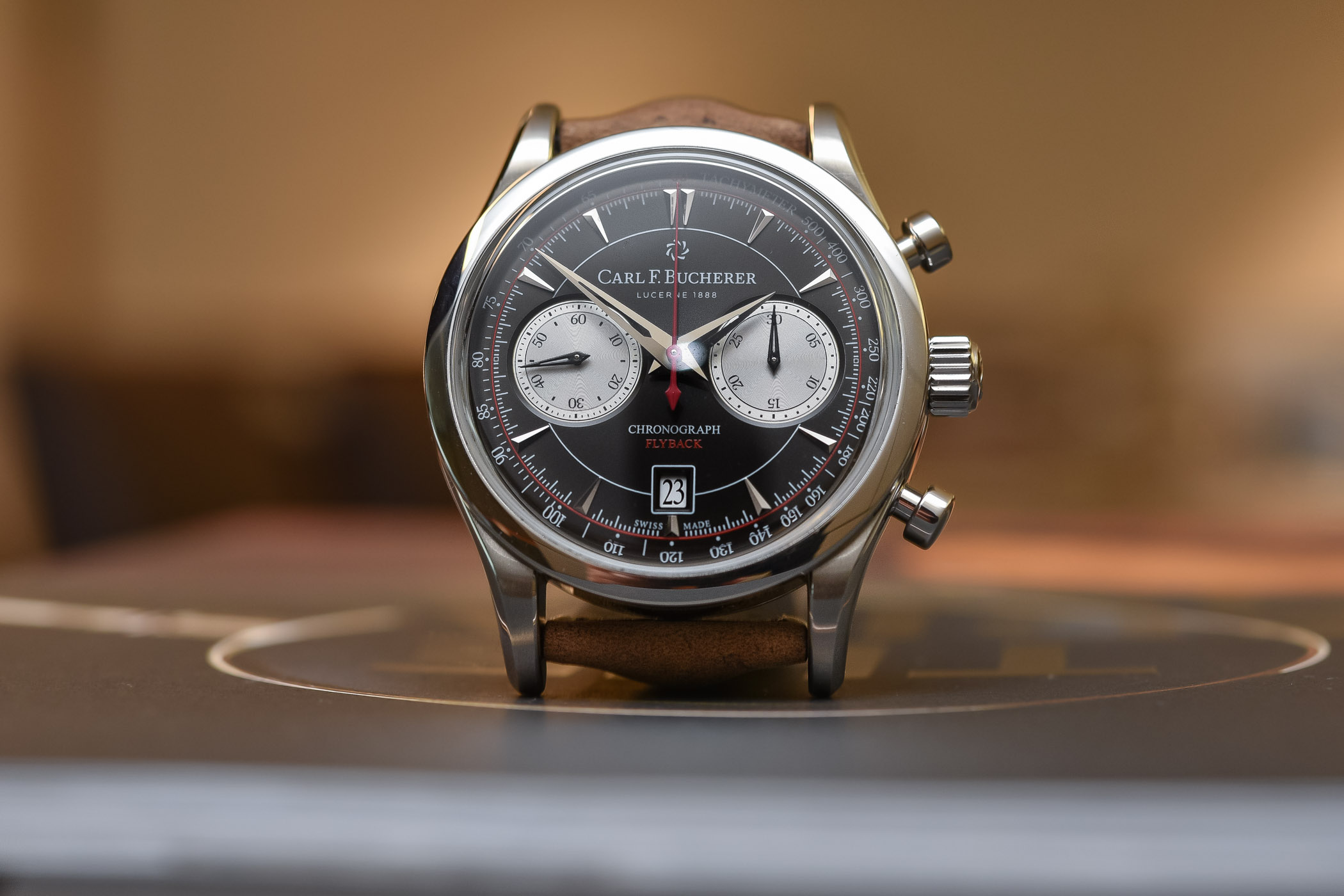 For this Retro-Style Manero Flyback, Carl F. Bucherer has chosen to have a reversed-Panda dial, in line with the rally/racing inspiration of this model. The dial is thus black (with sunray pattern) and features contrasting silver sub-counters. Several red accents add a sporty touch. The choice of having a bi-compax display makes this watch balanced and even if some don’t like the date window on chronographs, it is here well-positioned at 6 o’clock. For the rest, the dial doesn’t change and retains its sectors and applied facetted indexes, as well as the tachymeter scale on the periphery.

The final sporty/rally touch is given by the new leather strap. Usually worn on a formal, classic alligator leather strap, here we have a deliberately aged (and very cool) perforated Kudu leather strap in golden brown. Apart from the inherent quality of this strap, it is impressive to see how it changes the style of this watch and gives it a completely new look. It is secured with a stainless steel folding pin buckle.

The new Carl F. Bucherer Manero Flyback Retro-Style (ref. 00.10919.08.33.02) is now available at retailers, at the same price as other steel versions of this watch, meaning CHF 5,900. More details on www.carl-f-bucherer.com.