Breguet’s Marine Tourbillon Equation Marchante 5887 is an unabashedly complex and an unabashedly ornate timepiece. It is a massive gold vessel laden with history, complications and maritime flourishes that invites inquiry. One of Breguet’s most technically ambitious timepieces, the 5887 packs a perpetual calendar, a tourbillon and an ingenious running equation of time indicator on board and navigates with an ultra-thin automatic tourbillon calibre with a peripheral winding system. First launched in 2017 in platinum with a blue dial and in rose gold with a silver dial, in March 2020 we were treated to this rose gold and slate-grey dial edition, the very same model we had for our hands-on session.

A voyage of discovery

To fully appreciate the 5887 you have to understand where this watch is coming from (historically) and what its complications are about and their relevance in this context. It’s a singular timepiece blending old-fashioned (obsolete) complications like the tourbillon and a rare running equation of time indicator with contemporary solutions like the peripheral rotor system and a sapphire crystal cam mounted on the tourbillon. The aesthetics are a separate issue and I confess that before getting to know the watch I was overwhelmed by the sheer amount of decorative flourishes and information on the dial. Having written the first review of the 5887 using press images, the first surprise was to discover that the dial is not the chocolate-brown colour of the official images but a chameleonic silvery-grey colour that changes quite radically in different light conditions. 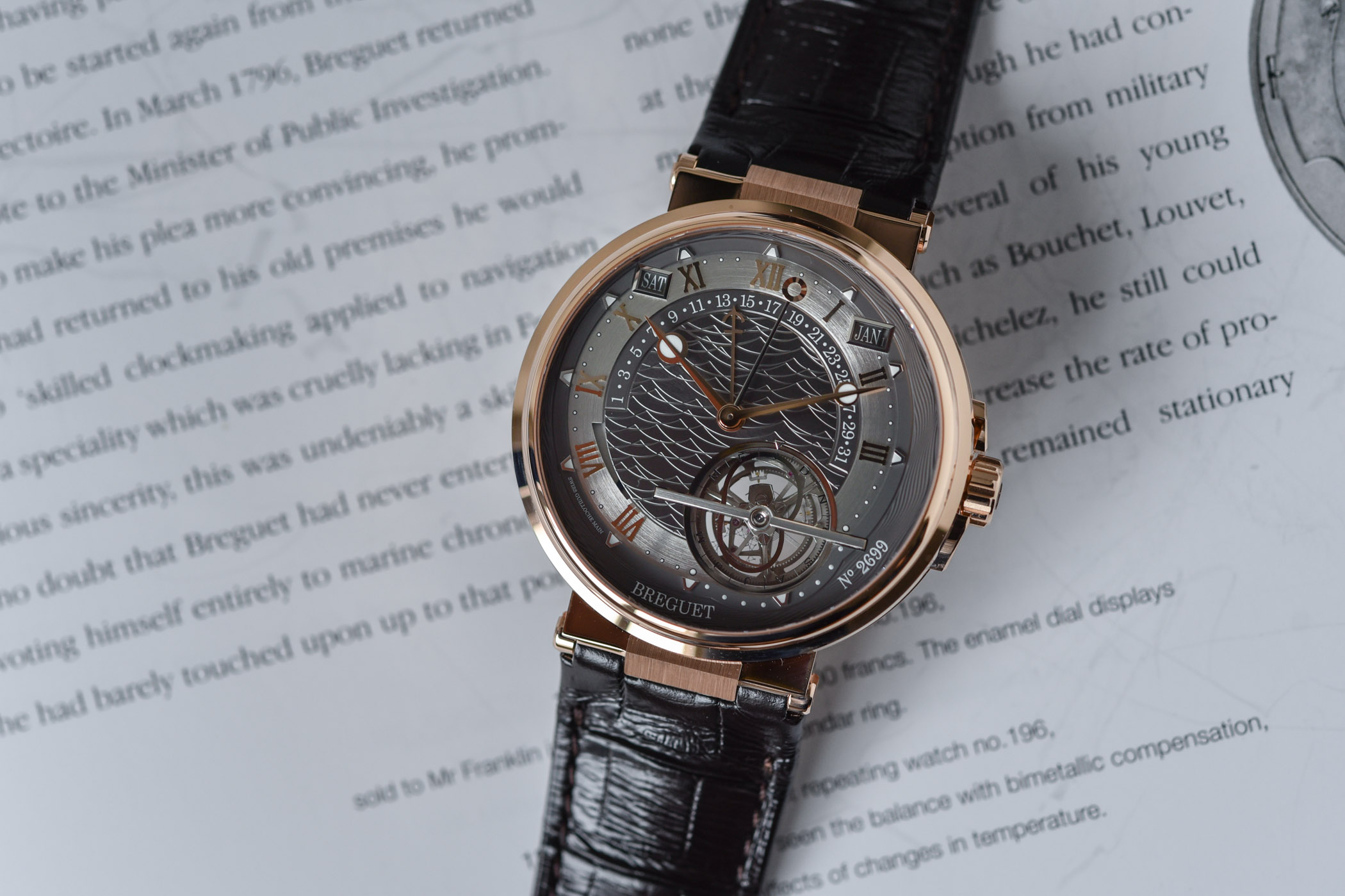 Breguet launched its Marine line of watches in 1990, a collection that celebrates founder Abraham-Louis Breguet’s ties to the French Royal Navy after his appointment in 1815 as Horloger de la Marine Royale, or official chronometer-maker. One of the most prestigious titles for a watchmaker of his day (along with his appointment as a member of the Bureau des Longitudes in Paris), Breguet began producing precision marine chronometers on a regular basis. 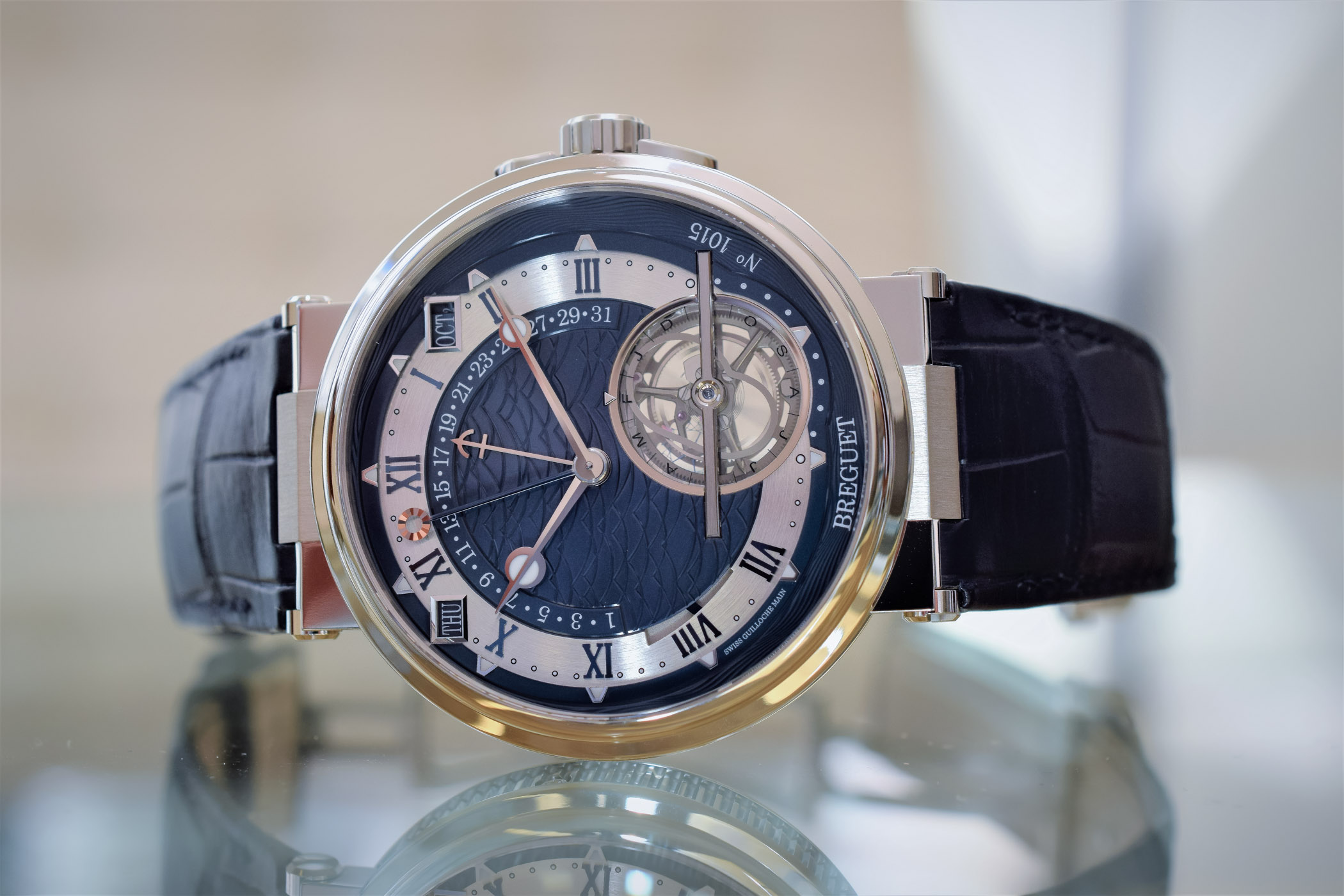 Revisited in 2005 and then again in 2018, the Marine collection got is Grande Complication model in 2017 with the Tourbillon Equation Marchante 5887, initially offered in a cold platinum and blue dial combination. The third-generation Marine collection appeared in 2018 (increased water-resistance and a touch ‘sportier’) and adopted many design cues from the 5887. Currently, the collection hosts an extravagant Alarme Musicale 5547, a Marine Chronographe 5527 and simpler time-and-date models now on luxurious integrated gold bracelets. Three years after its introduction, the magnificent 5887 made its debut in this infinitely warmer and richer rose gold and slate-grey dial version.

The most imposing element on the dial is the large aperture for the 60-second tourbillon. Housed inside a titanium cage, the structure is held in place by a particularly long bridge with the words Marine Royale engraved on its side. Obviously, tourbillons hold a special place in Breguet’s repertoire, a mechanism patented by A.L Breguet 219 years ago to neutralise the effects of gravity on his timepieces. Although the relevance of a tourbillon escapement has no real practical purpose in modern horology, it is a much-loved complication and appears in high-end watch brands as a testament of its watchmaking skills. 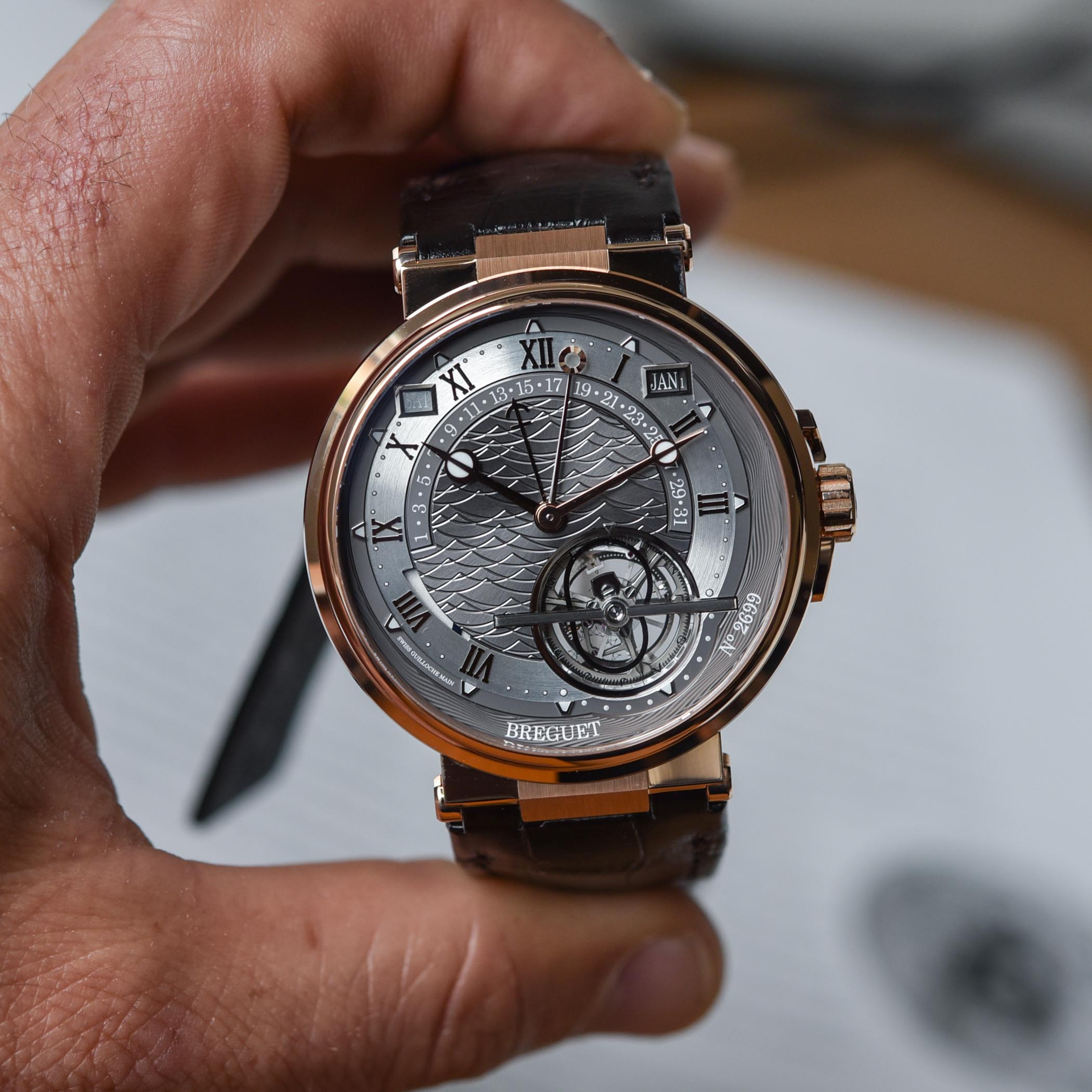 Before we look at the complications, there is something else we need to mention that might have escaped a first look: the chapter ring with the applied rose gold Roman numerals is slightly off-centre. If you look at the swirling engine-turned pattern on the periphery, you’ll see that it is thicker on the right and practically absent on the left side of the dial. A similar off-centred tactic is adopted for the large aperture of the 60-second tourbillon. Sitting between 5 and 6 o’clock, the pronounced aperture squeezes against the chapter ring provoking an indentation. Quirky touches that add character and personality to this Breguet Marine Tourbillon Equation Marchante 5887 and refer to A.L. Breguet’s taste for off-centred indications. 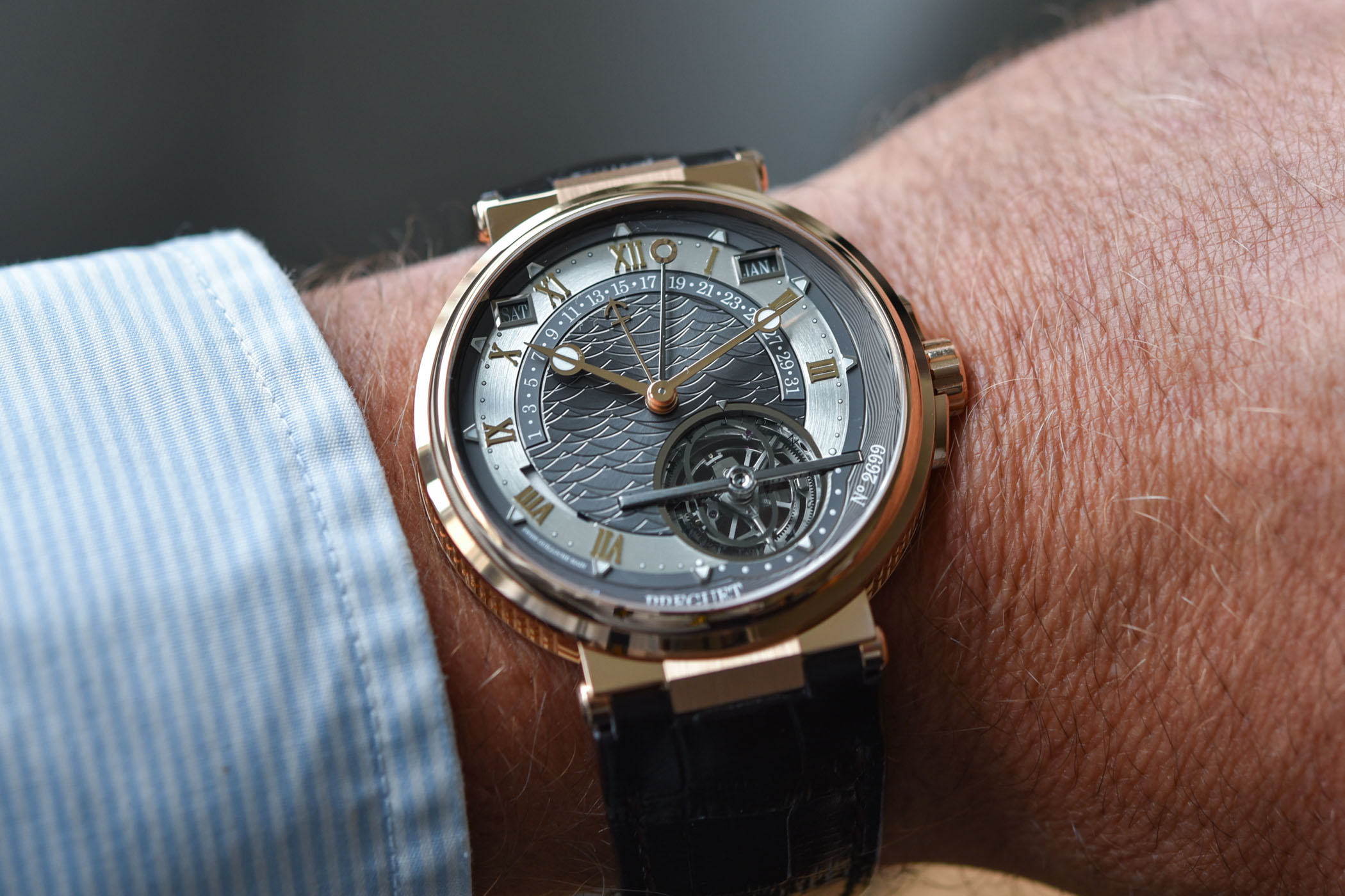 Applied rose gold Roman numerals crowned with nautical pennants recreate the silhouette of a ship’s wheel. Another unusual feature is the uneven amount of dots placed between the hour numerals (explained below) and the use of luminescence in a watch of this stature. The nautical pennants are luminescent as are the classic Breguet moon-tipped hour and minute hands. Two silver rectangular windows relay the day of the week (left) and the month (right). Inside the month window, you’ll also see a tiny numeral in the lower far right corner corresponding to the leap year indication. The date is indicated by a retrograde anchor-tipped hand pointing to an arc with white Arabic numerals and, although I missed it on first inspection, there is even a power reserve indicator tucked into the chapter ring between 7 and 8 o’clock. 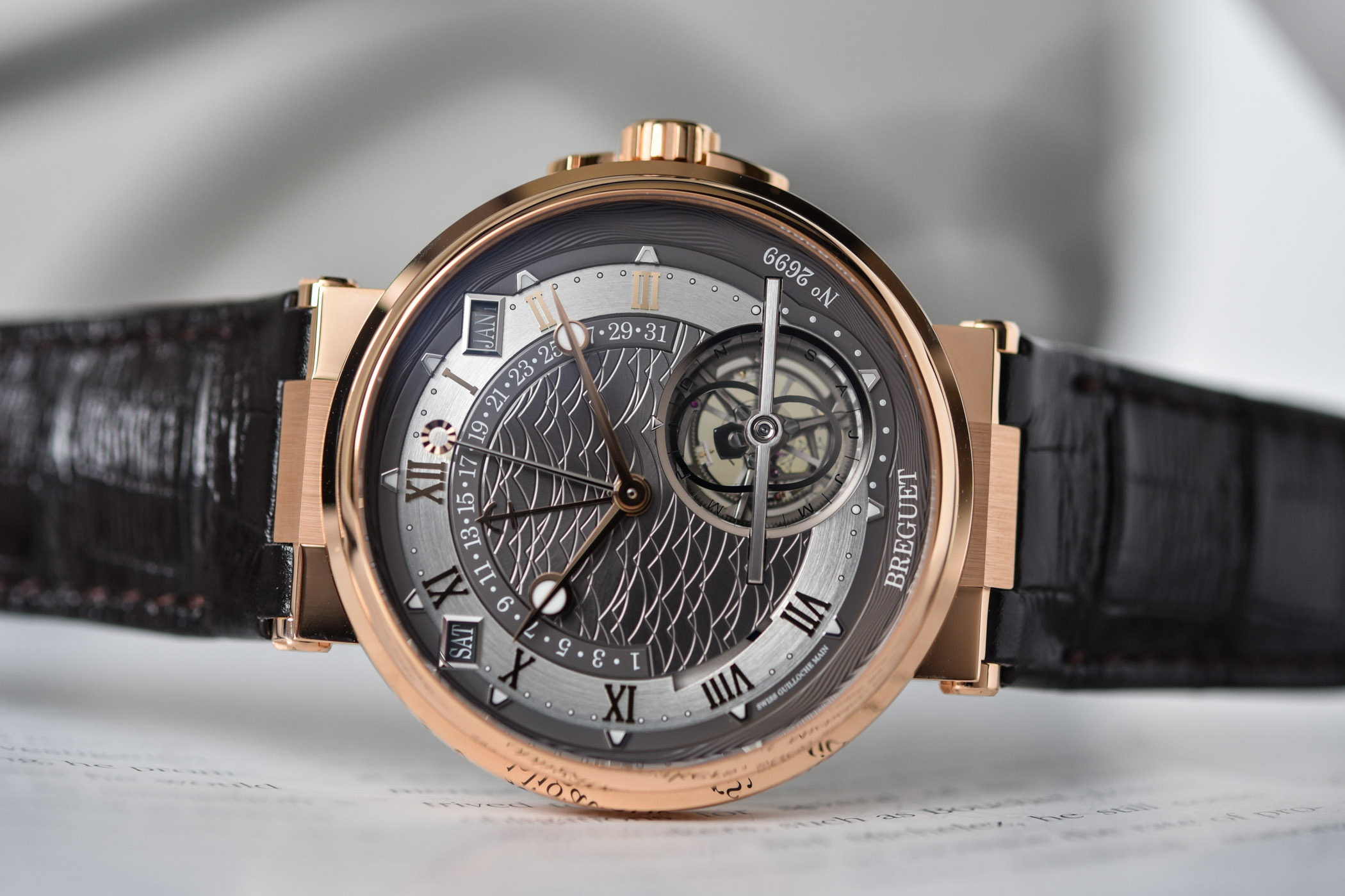 A dial without hand-guilloché decoration would not rank as a thoroughbred Breguet, a hallmark design feature used by A.L. Breguet from 1786. The gold dial features an engine-turned wave design in its centre and a swirling pattern on the perimeter of the dial. Every tiny detail of the dial is beautifully finished: the bevelled and polished silver frames for the calendar functions; the circular-brushed silver chapter ring and contrasting gold Roman numerals; the polished aperture of the tourbillon contrasting with the brushed upper surface of the tourbillon bridge… But wait a minute, what about the kidney-shaped thing in the tourbillon and that fourth co-axial hand with its golden doughnut-shaped tip?

If the tourbillon is largely obsolete in contemporary horology, an equation of time complication is about as antiquated as a sundial. But therein lies its charm. An equation of time (EoT) indicates the difference between solar (true) time and conventional mean time (aka civil or standard time) and displays how many minutes have to be added or deducted from the mean time to get the actual solar time; the time can vary from minus 14 minutes to plus 16 minutes throughout the year Although it is a thoroughly impractical accessory today, an EoT was a vital calculation in celestial navigation to determine longitude. What is complicated, however, is the way Breguet has displayed the EoT allowing civil and solar time to be consulted simultaneously. Unlike conventional linear counters used to display the discrepancies between solar time and mean time on some watches, Breguet has gone much further and offers us an ‘at a glance’ reading of the discrepancies between solar and mean time in a very original manner. 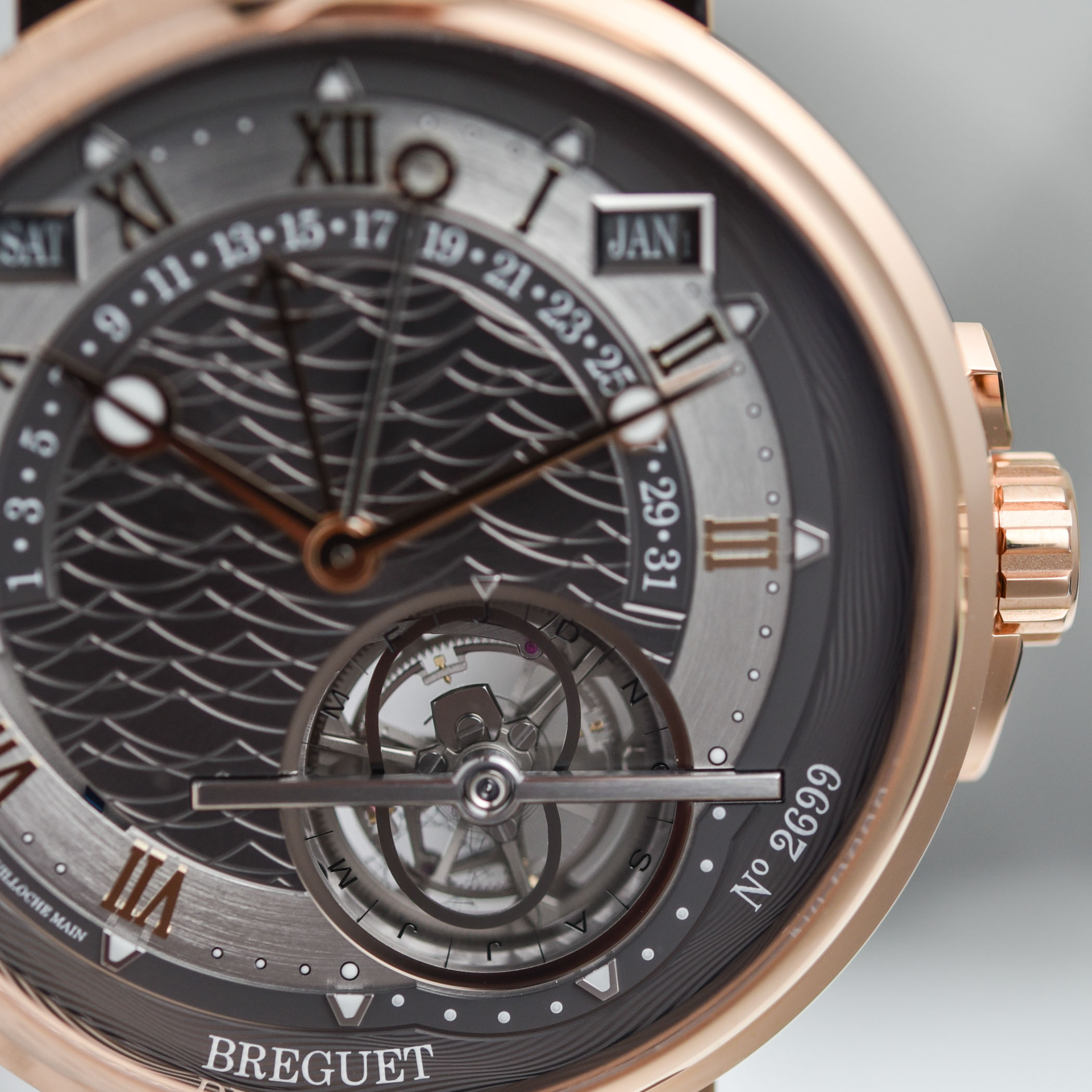 To do this, Breguet has incorporated two minute hands, one for traditional civil time and a second hand, the one with the golden faceted Sun, to track solar time. The minute hand tracking solar time ‘runs’ either ahead or behind the minute hand and explains the appellation marchante in the name of the watch. It also explains why the dots between the hour markers are irregular. The measurements offered by the EoT are provided by the strange kidney-shaped cam on the tourbillon. The cam is placed on a sapphire disc with the months and completes a full rotation per year without obstructing the view of the tourbillon below. Perhaps not a lifesaving complication today, it is a definite conversation piece.

Handling this watch is quite an experience, not just because of the complications but because of its weight and presence. It is a large watch by Breguet’s standards and reflects the more contemporary trend for larger watches. Measuring 43.9mm across and with a thickness of 11.75mm, it’s not as thick as you would expect from a watch with so much action below and above deck. Like a colonnade of polished gold pillars, the hallmark Breguet fluting on the caseband is featured here but is thicker and more pronounced than on other models. The crown is also fluted and protected by two crown guards to ensure the 100m water-resistance – pretty impressive when you start to tally the goods on board. Most of the case is polished, including the stepped bezel and crown guards, save the central brushed finish on the lug. 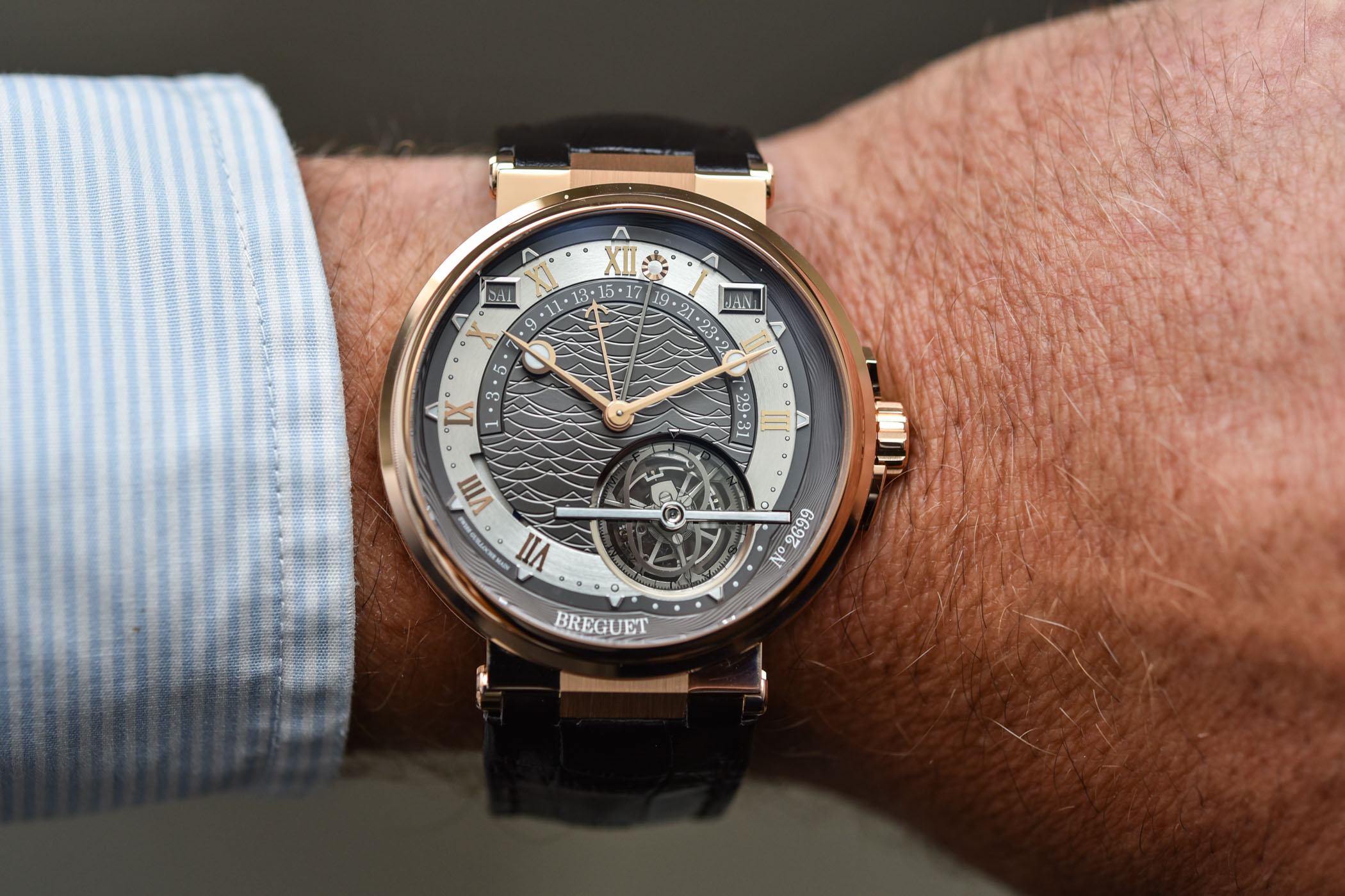 As richly adorned as the dial, the first view of the movement in this Marine Tourbillon Equation Marchante 5887 reveals the bridges with the hand-engraved image of a historic French naval vessel, the Royal Louis, and a compass rose engraved on the barrel. Another interesting feature is the peripheral oscillating weight in platinum. The peripheral rotor was first used in the Classique Tourbillon Extra-Plat Automatique 5377 model of 2013 and more recently inside the 5367 model. With so many complications on board – 563 components – the power reserve of 80 hours is exceptional. In the name of thinness, the mainspring barrel was also whittled down by creating a groove around the barrel drum to reduce the thickness by 25%. 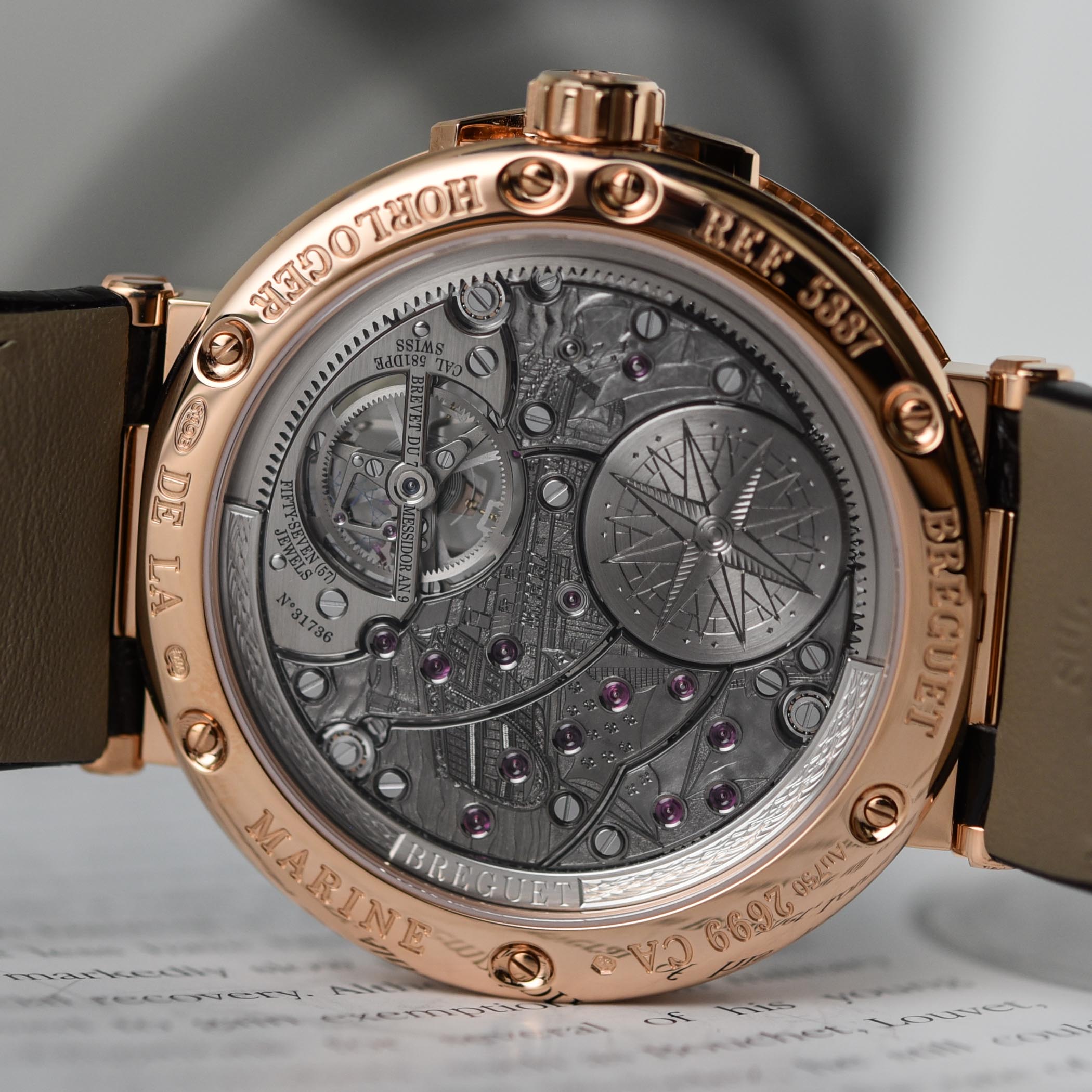 The calibre inside this Marine Tourbillon Equation Marchante 5887 is the same calibre 581 inside the ultra-thin tourbillon models mentioned above but with the addition of a QP module and the EoT cam. The reverse view of the tourbillon reveals another engraving referring to the date when A.L. Breguet patented his tourbillon, written in the French Republican calendar format: Brevet du 7 Messidor An 9 (26 June 1801). Although the engraving on the bridges might look old-school, Breguet has deployed its modern silicon technology: the escape wheel is silicon, the inverted lateral lever has silicon horns and the balance spring is also made from silicon. 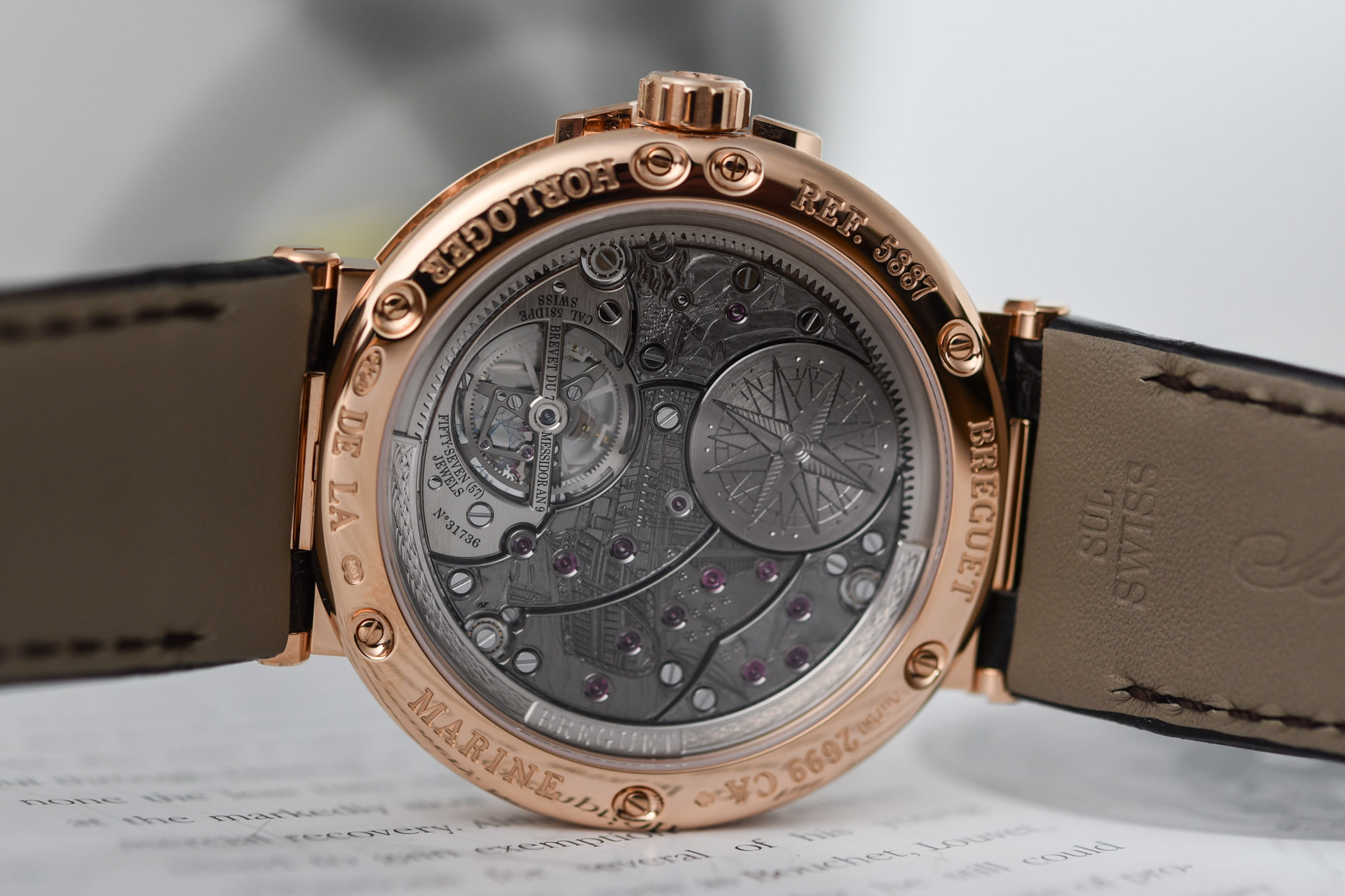 Formidable is the word I’d use to describe this watch. Whether you like its looks or not, the Tourbillon Equation Marchante 5887 is a remarkable piece. It’s a watch that needs exploring and understanding and will delight horophiles who don’t necessarily demand that all the complications be practical or useful. The EoT is a whimsical horological treat and harks back to the days when solar time – the passage of time based on the position of the Sun in the sky – ruled our world, long before the advent of civil time (UTC) and atomic clocks.