Last year Blancpain revisited its iconic Fifty Fathoms Bathyscaphe in a Sedna® gold case and blue dial. This is not the first time that the Bathyscaphe is housed in a gold case, but it is the first time that Blancpain marries Swatch Group’s proprietary rose gold alloy to a blue dial. In the vastly saturated world of bulky tool-oriented divers, the Bathyscaphe wins the elegance prize, hands down. As the civilian offspring of the military Fifty Fathoms, the “first modern diver’s watch” of 1953, the Bathyscaphe complies with ISO 6425 diving watch standards but stands out from the crowd with its smaller case size and more sophisticated styling. Bridging the best of both worlds, the Fifty Fathoms Bathyscaphe can surface from depths of up to 300 metres and still look elegant enough for dressier onshore occasions. Released in 2020, we had a hands-on session with the watch, and this is what we found. 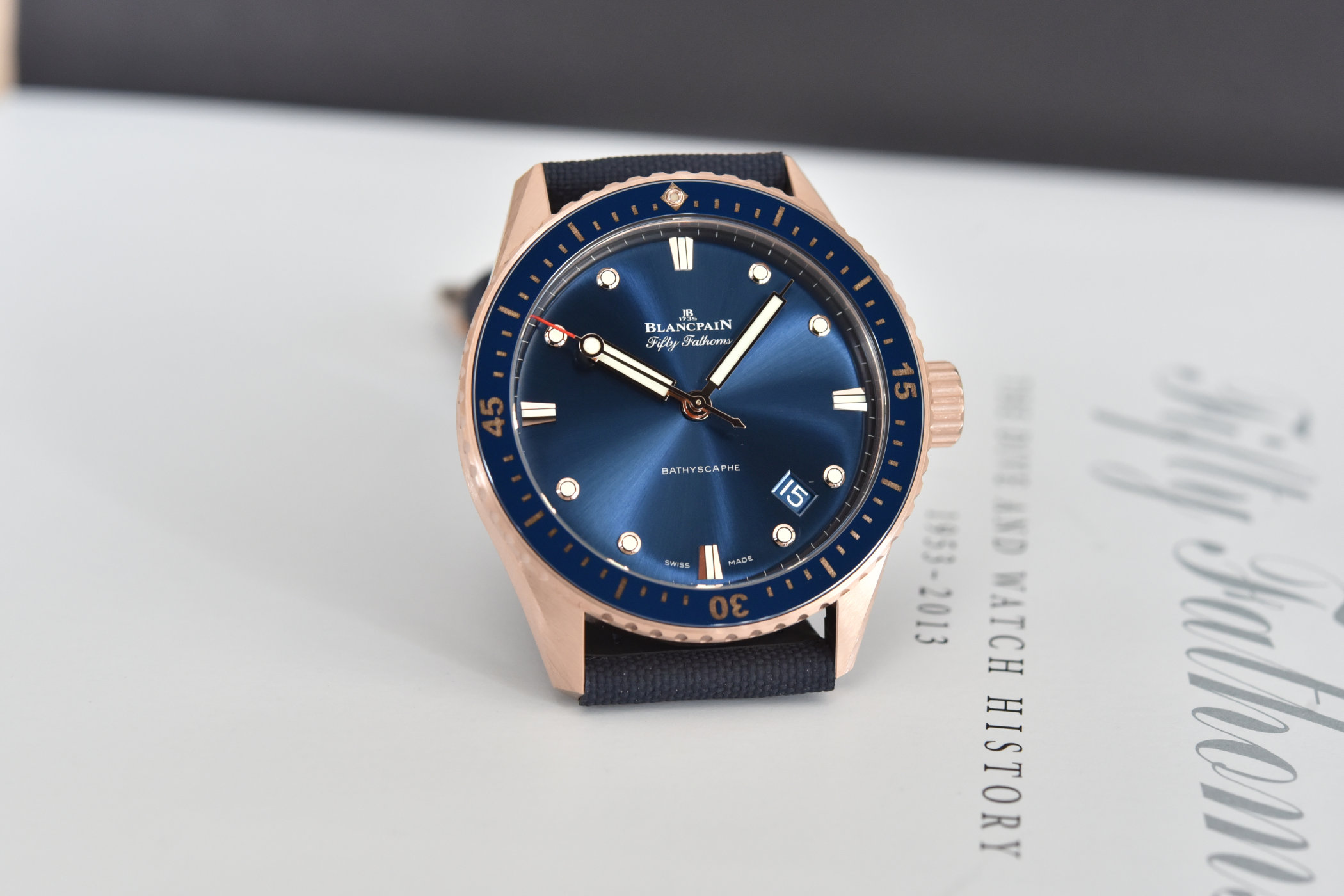 Most of you are familiar with the story behind the Fifty Fathoms, a professional dive watch made in 1953 by Blancpain for French Navy combat divers. Designed by Jean-Jacques Fiechter, Blancpain’s CEO at the time and an avid scuba diving fan, the dive watch was later refined following a request from Captain Robert Maloubier for his unit of French Navy combat swimmers (frogmen). They needed a resilient dive watch with a large black dial, bold numerals, clear markings and a rotating bezel to time immersions. Blancpain responded with the Fifty Fathoms, a robust automatic 42mm diver with water-resistance to 50 fathoms (91.45m) and magnetic shielding. Challenged by a patent held by Rolex for a screw-down crown, Blancpain developed a dual-gasket crown system to achieve the necessary depth rating.

Following the successful immersion of the Fifty Fathoms, Blancpain’s maverick CEO Jean-Jacques Fietcher spotted a niche for a smaller, civilian dive watch.  This resulted in the birth of the Bathyscaphe in 1956 with a more wearable 37mm case size. Named after the deep-water diving vessel invented by August Piccard, the Bathyscaphe was still a formidable underwater companion but represented the growing trend for dive watches to surface in different contexts of everyday life. In addition to the smaller diameter, the thinner rotating bezel and rectangular indices – that distinguished it from the mighty Fifty Fathoms tool watch – the Bathyscaphe also featured a practical date window. Although initially designed for separate clientele, the two lines eventually merged into one collection: Fifty Fathoms. 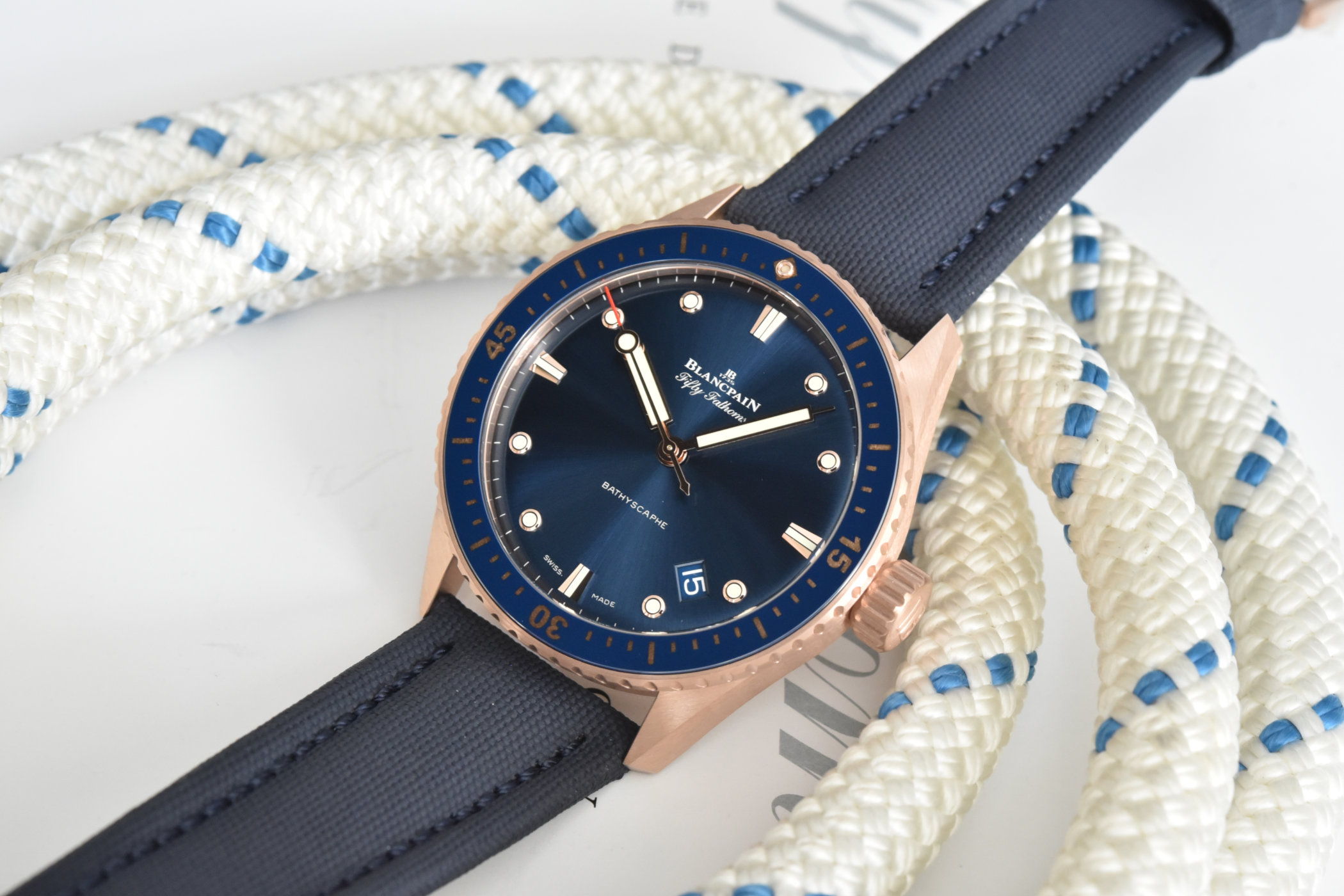 Following in the wake of the overhaul of the Fifty Fathoms in 2007, the Bathyscaphe was revamped in 2013 to recover some of the aesthetics of the first edition, including the original sharply defined case contours. A new case size of 43mm, a slimmer, scratch-resistant unidirectional rotating ceramic bezel, and dials and hands designed to evoke the earliest versions of the Bathyscaphe formed part of the upgrade, as did the incorporation of Blancpain’s automatic in-house calibre 1315 – the same one found on board the Fifty Fathoms Automatique. With three mainspring barrels offering a five-day power reserve, the other novelty is the use of a silicon balance spring. The fact that silicon is anti-magnetic means that the traditional soft iron case to protect the movement is no longer necessary and the mechanism can be viewed through the sapphire crystal caseback. 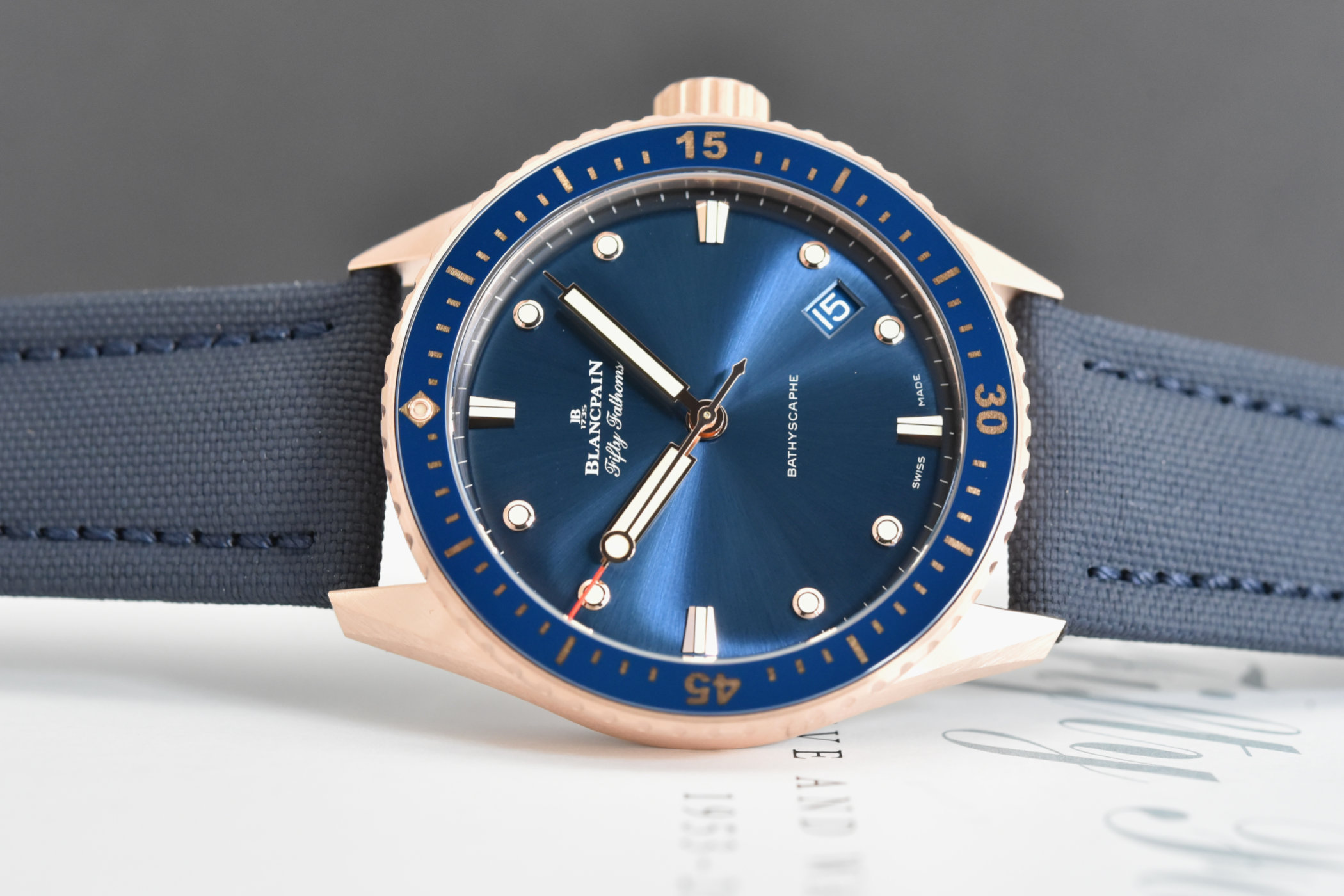 Over the decades, the Bathyscaphe has taken on complications, including a flyback chronograph in 2014 followed by a green version in 2020. Even with a sophisticated complication like a flyback chronograph on board, the Bathyscaphe retains its mission as a utilitarian 300-metre dive watch. In 2018 the Bathyscaphe staged a comeback with the release of two 1970s-inspired models: the Day Date 70s with gradient dial and a desert-themed Day Date Desert Edition model. In 2019, it upped the ante with the Quantième Complet Phase de Lune.

As many MONOCHROME readers know, Sedna® gold is a proprietary alloy developed by Swatch Group using gold, copper and palladium. Designed to guarantee the durability of the red gold colour, the Bathyscaphe has taken a dip in these luxurious waters. To underscore the sporty dimension of the Bathyscaphe, the sharp contours of the case are satin brushed. Measuring 43mm in diameter and with a height of 13.40mm, the watch has sporty dimensions but is not too large to be worn as a daily beater. The caseback and dial are protected with sapphire crystal glass, and the water-resistance is 300 metres. 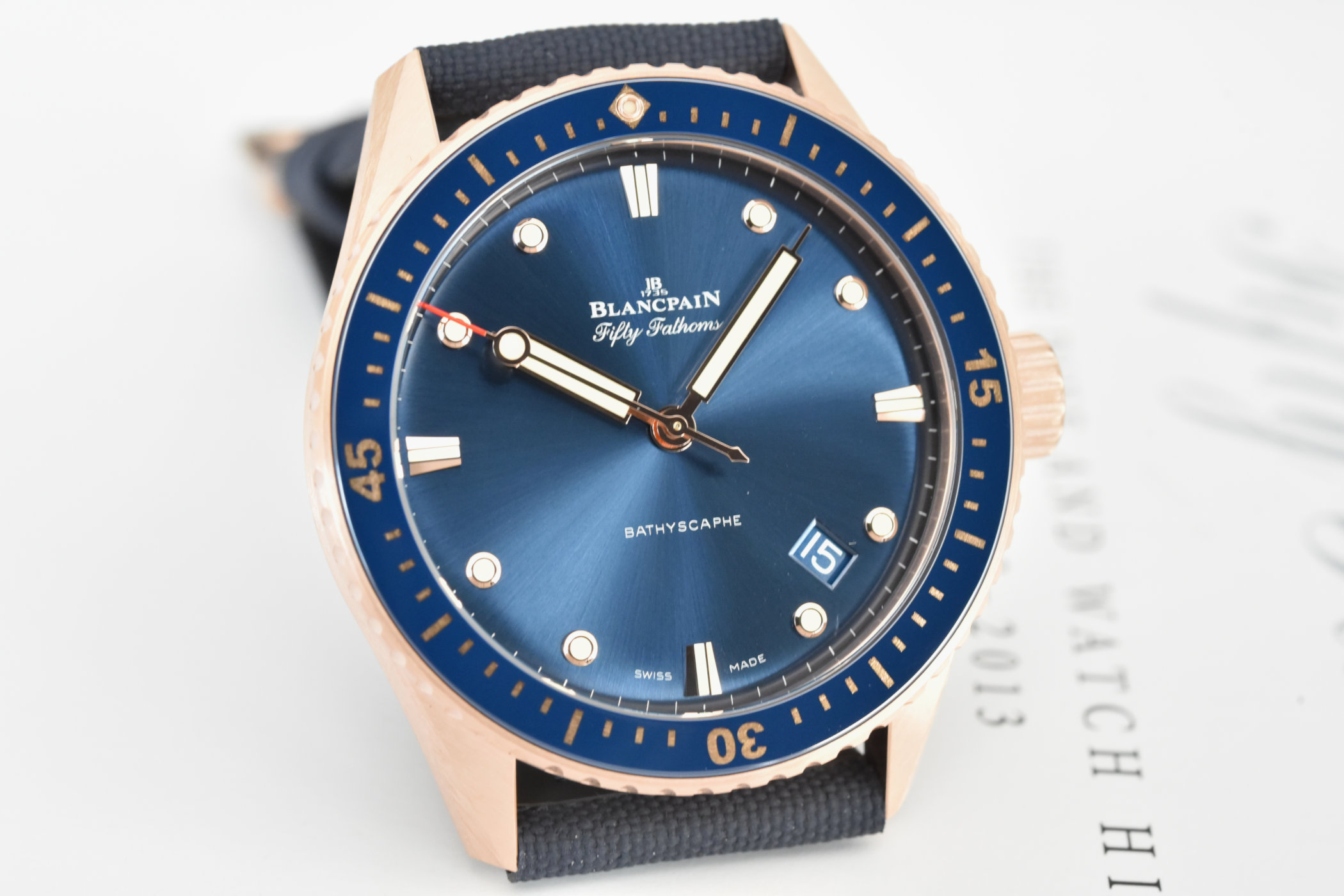 Even the unidirectional rotating bezel with its coin-edge profile is made of Sedna gold and fitted with a blue ceramic insert with Ceragold® markers, another Swatch Group innovation. The combination of dark blue ceramic (a good choice for saltwater immersions) and rose gold is exceptionally handsome. Moreover, the fact that the case is brushed and not polished dispels any associations of a flashy, ostentatious gold dive watch. 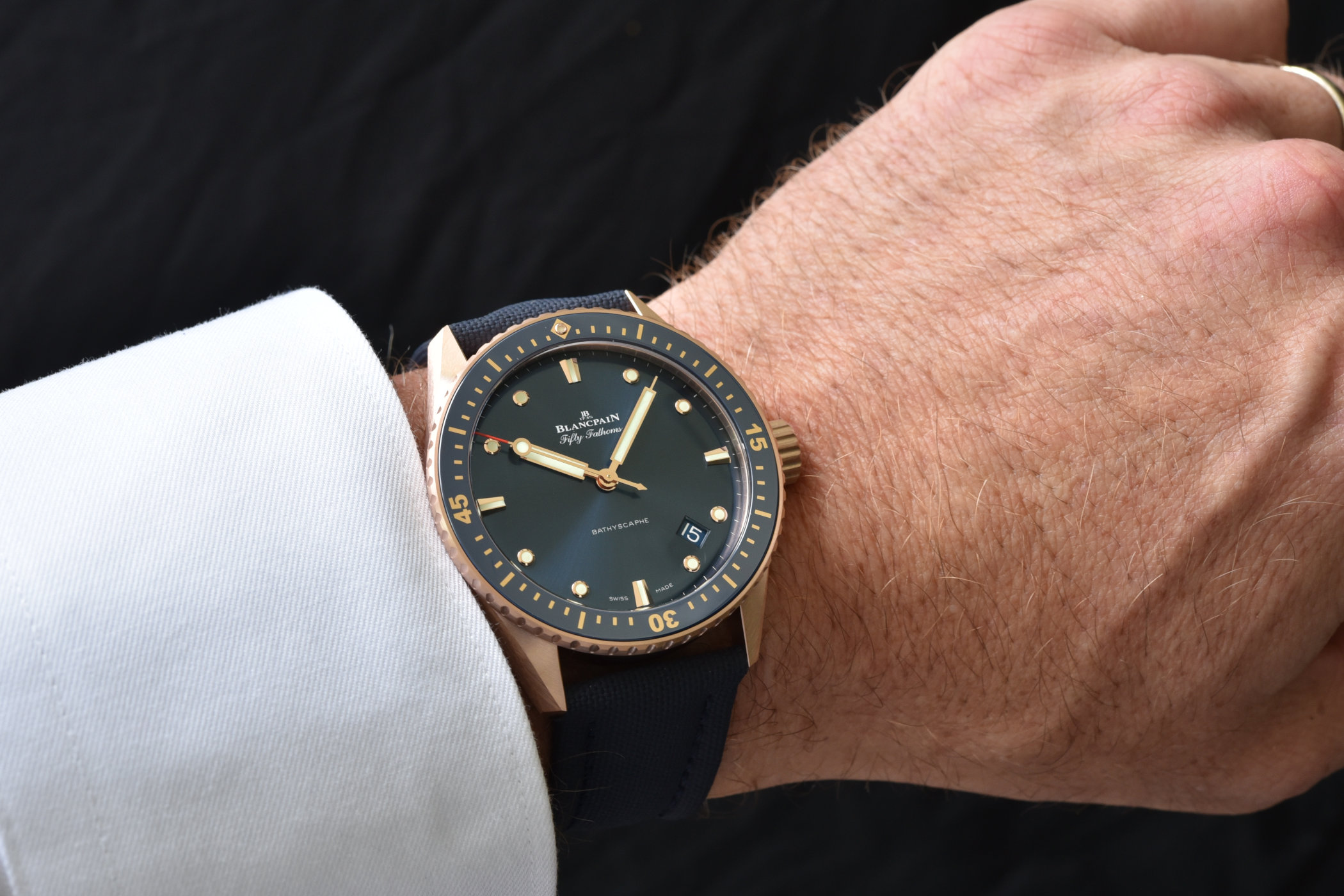 Capturing the intense dark blue colour of the ocean, the dial emphasizes Blancpain’s solid ties to the world of diving and its commitment to ocean conservation. The sunburst blue dial plays with the light creating fascinating shimmering reflections. Also crafted in Sedna gold, the rectangular and dot-shaped hour markers are applied to the blue dial and filled with Super-LumiNova to enhance visibility, which is a prerequisite of any professional dive watch.

Like the Bathyscaphe watches of the 1950s, the hour and minute hands are thick and rectangular with wide strips of luminescent material. The central seconds hand also has a luminescent lollipop and a red tip. What always strikes me about the Bathyscaphe is its surprising and ultimately refined minimalism. Some might quibble about the date window, but that was an original feature of Fiechter’s design. Discreetly tucked between the 4 and 5 o’clock markers, the date window features a blue background to match the dial.

The reverse side, with its 12-sided gold profile, reveals Blancpain’s automatic calibre 1315, which was introduced in 2007 for its sportier and larger Fifty Fathoms range. A heavy, large 18k Sedna gold rotor with sandblasted and satin finishings powers the three barrels that ensure a beefy 120-hour/5-day power reserve. The balance spring, as mentioned, is made of silicon and is impermeable to magnetic fields. The finishings are not Haute Horlogerie but perfectly in line with the nature of the watch with perlage and snailed and bevelled bridges. Beating at a frequency of 4Hz/28,000vph, the calibre measures 30.60mm x 5.65mm and has 227 components. 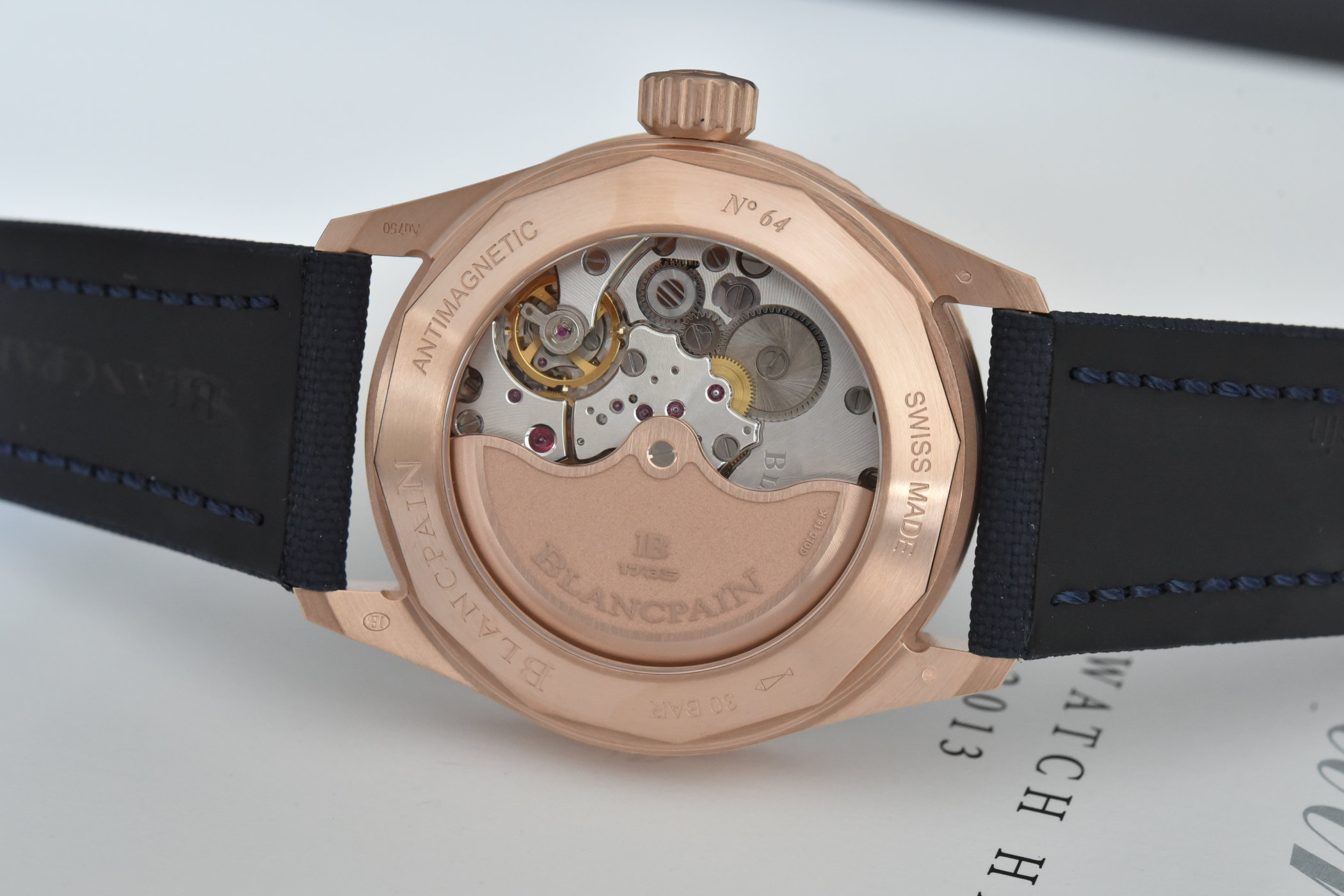 In short, the Blancpain Fifty Fathoms Bathyscaphe is something of an oddity in the world of dive watches. It has all the prerequisites of a dive watch, but its relatively restrained proportions and dashing elegance make it a perfect companion for practically any situation on land. The combination of Sedna gold and the lovely blue sunburst dial is captivating, and the brushed gold surfaces tone down the potentially flashy Midas vibe.

Although we only have pictures of the sail-canvas strap, the watch also comes with a blue NATO-style strap, with Sedna gold pin buckles. The Blancpain Fifty Fathoms Bathyscaphe (Ref. 5000-36S40) in Sedna gold retails for EUR 23,450.