About a year and a half ago, French brand Bell & Ross made a prominent entrance on a market where we didn’t expect it to go, that of the sports watch with an integrated bracelet. Personified by the BR 05 collection, the idea was to merge the classic design cues of the brand – the squared case, the military roots – with a more modern and urban direction. And yes, to us, it succeeded. Following the inaugural models, the Bell & Ross also released a chronograph model and, today’s topic, a new blue-coloured version of the BR 05 Skeleton.

The Bell & Ross BR 05 concept is, on paper, pretty simple… but also pretty risky. The idea was to use the most iconic elements of the brand’s design language and to implement them into the ultra-popular style of the luxury sports watch with an integrated bracelet. In short, B&R decided to create a watch in the spirit of the times, still recognizable as a B&R but to be worn at the city… and not on a battlefield or inside a jet fighter’s cockpit.  Easier said than done, however. Drastically changing category never comes without risk and, by experience, we also know that entering the luxury sports watch market, without copying existing icons, can be complex. 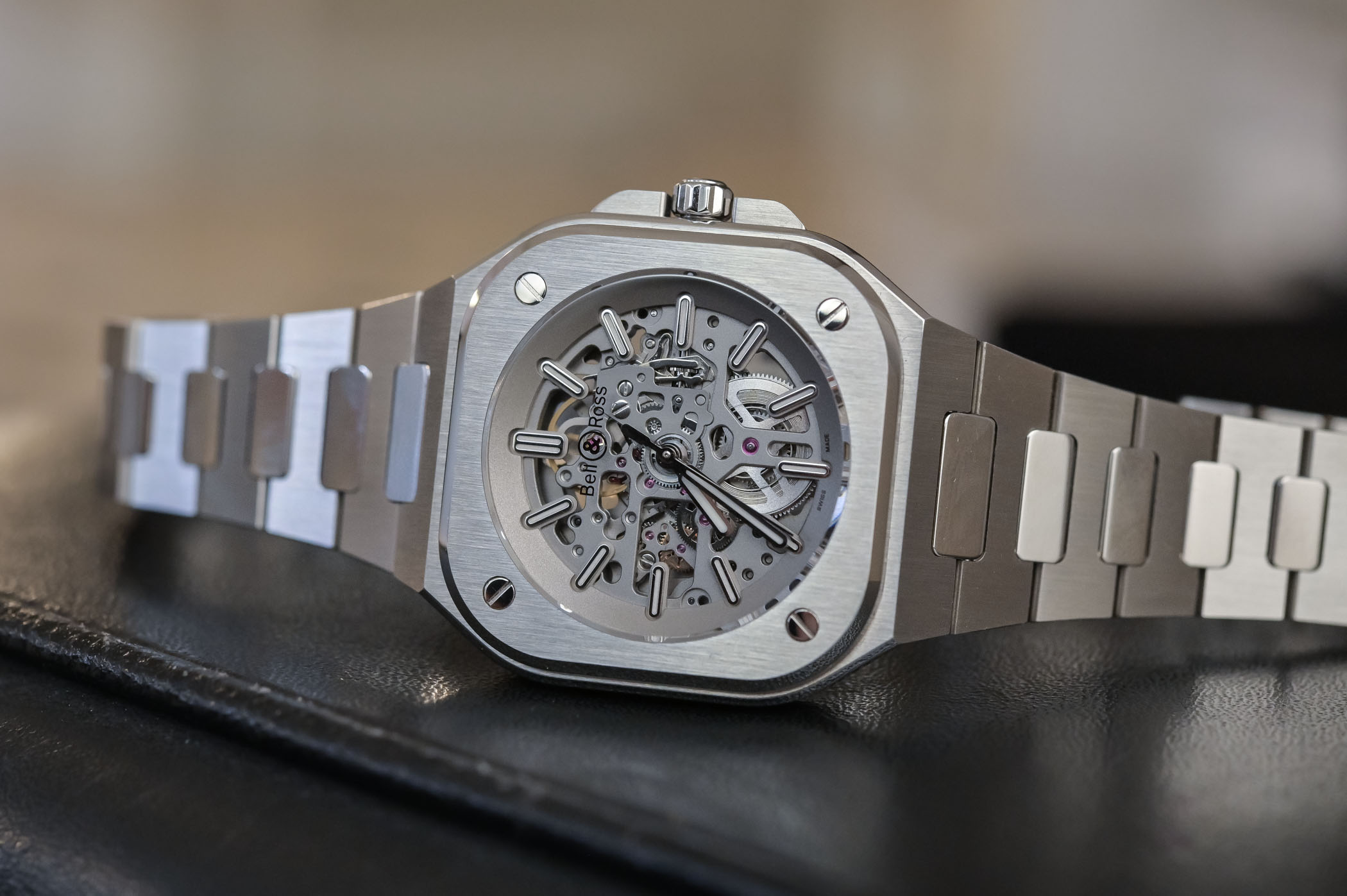 The BR 05 Skeleton was originally presented in 2019, with a monochromatic grey-on-steel design.

Still, Bell & Ross showed creativity and managed to bring what’s popular – the relatively thin steel case, the simple display, the mix of sportiness and luxury, the necessary integrated steel bracelet and an overall very nice execution – in a watch that was still fully identifiable as a Bell & Ross, thanks to the integration of the square case, functional screws and round dial opening, as well as numerals and indexes identical to the brand’s pilot’s watches.

In addition to the classic (understand closed dial) models and the more masculine, bolder chronograph version, the Paris-based brand also included openworked version in the collection, and today we look at a model launched in mid-2020, the BR 05 Skeleton Blue. 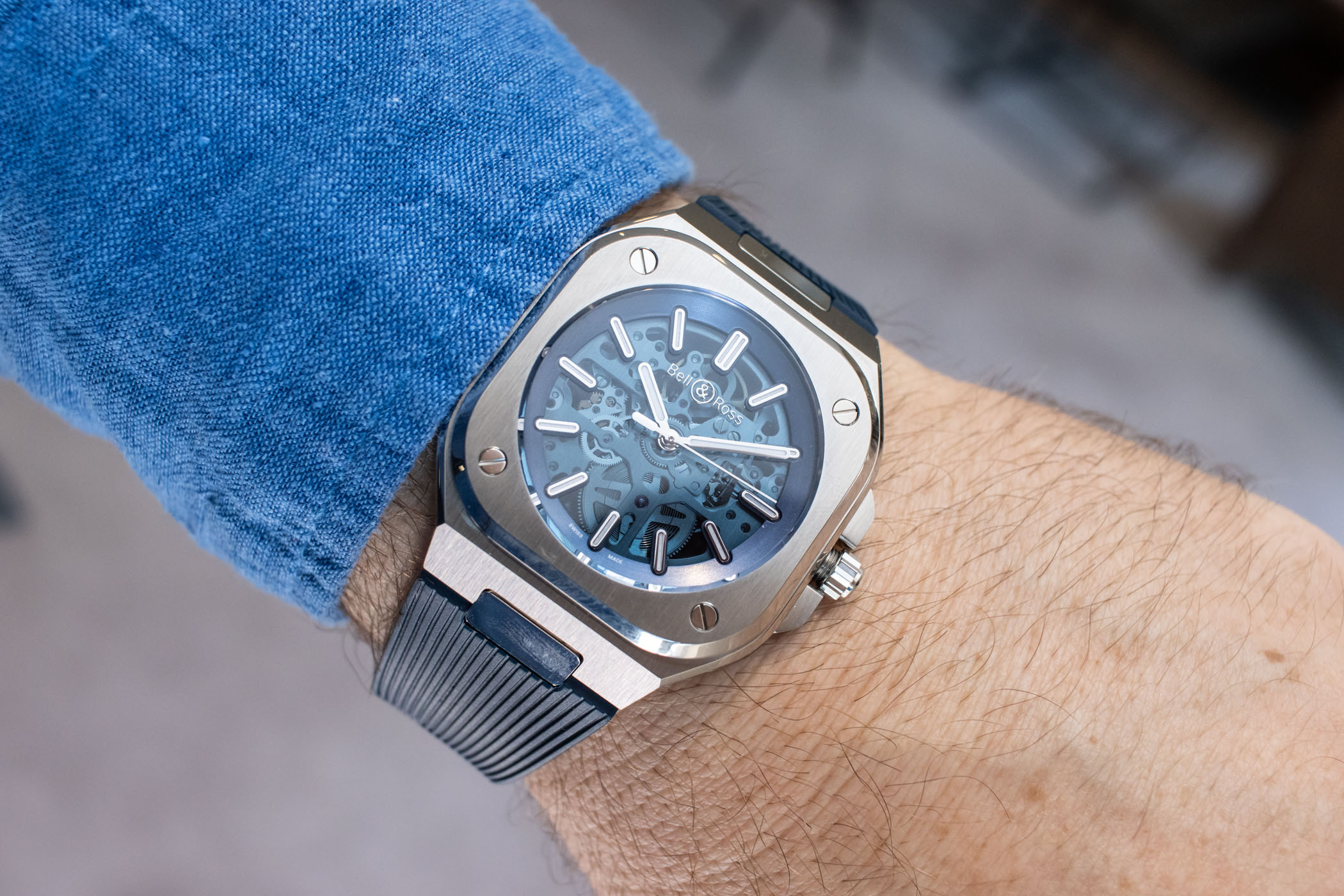 Basically, we’re here talking about a different movement and a dial that reveals the mechanics. Other than that, the BR 05 Skeleton is identical to the time-and-date versions. As such, we find back the very precisely executed 40mm squared case, topped by an equally shaped flat bezel with 4 functional screws. Most of the case is finely brushed, whether vertically on flat surfaces, or horizontally on the casebands. This matte finish is dynamized by large polished bevels running on the sides of the bezel and mid-case and the whole habillage not only feels solid by beautifully done. The crown is protected by a square-ish module and screws down, giving a comfortable 100m water-resistance. 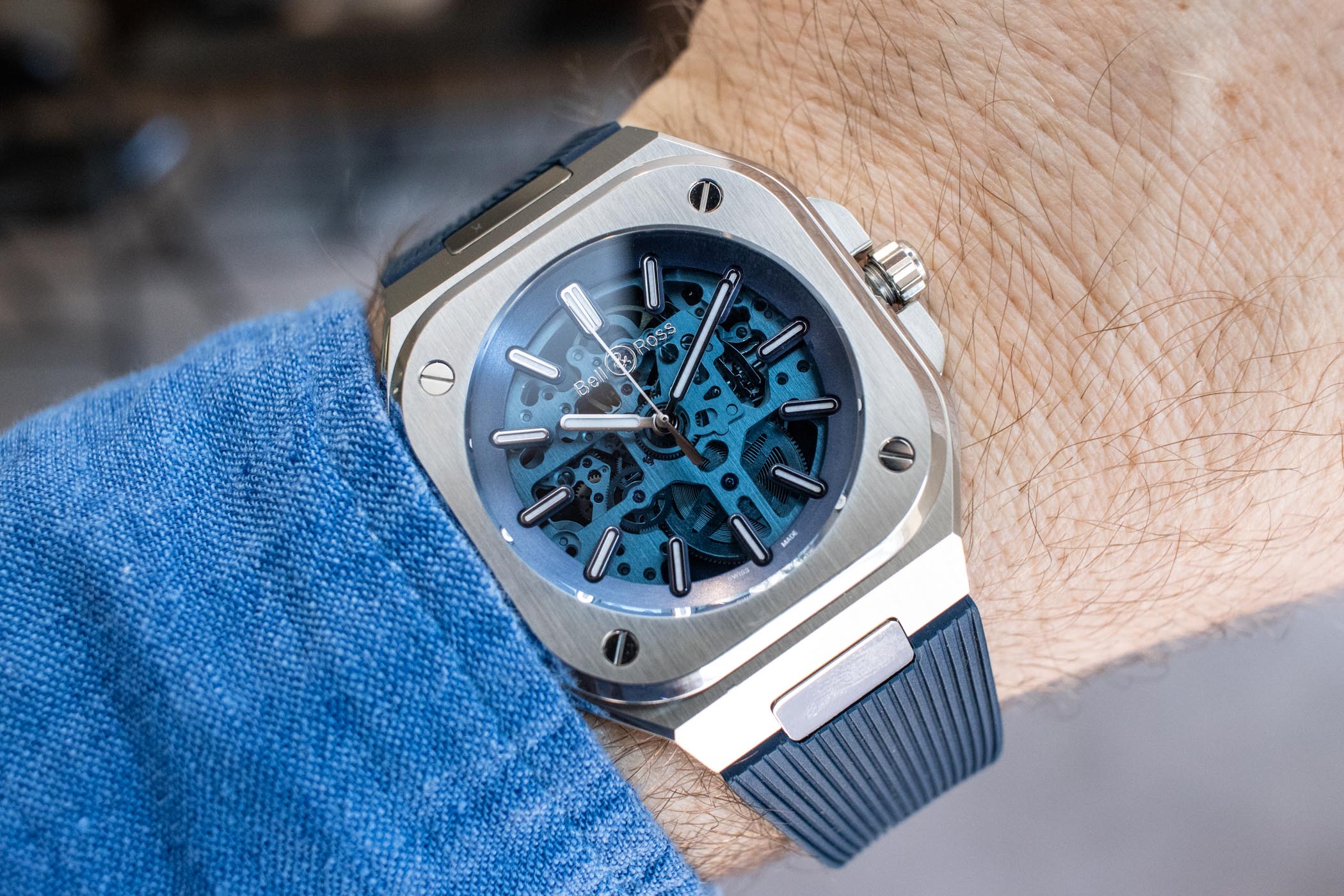 Essentially the same watch as the Skeleton presented in 2019 and already back then limited in production, the BR 05 Skeleton Blue is now bringing a splash of colour to a previously monochromatic model, thanks to blue-tinted sapphire dial giving a bolder look – it has to be noted that the dial is coloured, not the movement, which is grey. This transparent background offers a view on the movement, with a mainplate opened upon B&R requirements (the pattern is unique to the brand). The mechanics are nicely if industrially finished, with a vertical brushed surface. The dial is framed by a circular brushed inner flange where the applied metallic markers appear to float above the movement. No Arabic numerals here, just rounded batons. Hands and indexes are filled with Super-LumiNova and the date function has been removed. 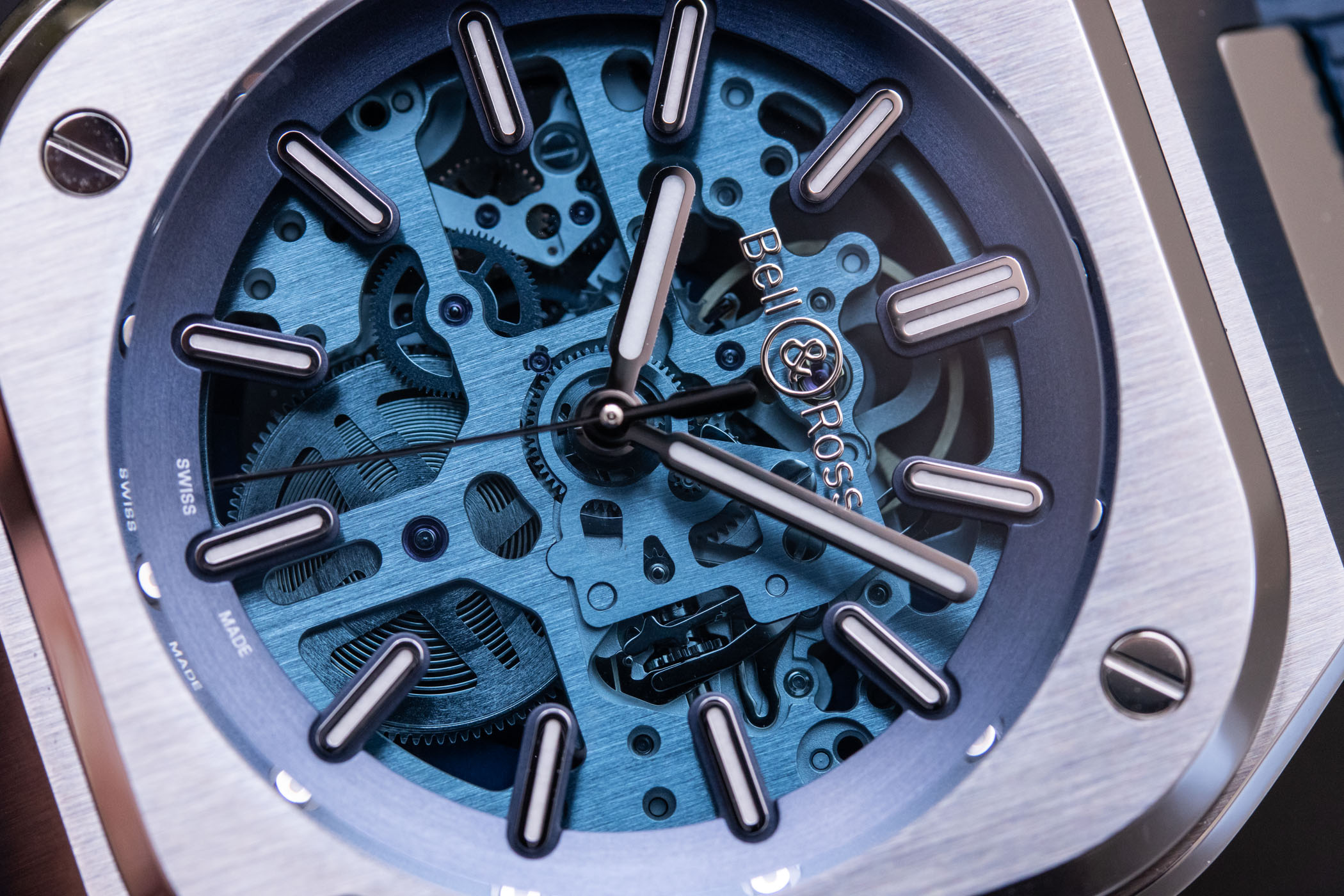 Available, like the rest of the collection, on an integrated stainless steel bracelet, we had the version on a rubber strap. While the closed dial models are, in my opinion, better looking on steel bracelet, the more complex style of the dial and its colour are better paired with the textured rubber strap offered by Bell & Ross, presented in blue. It remains greatly integrated with the case and is very comfortable. It is closed by a folding clasp. 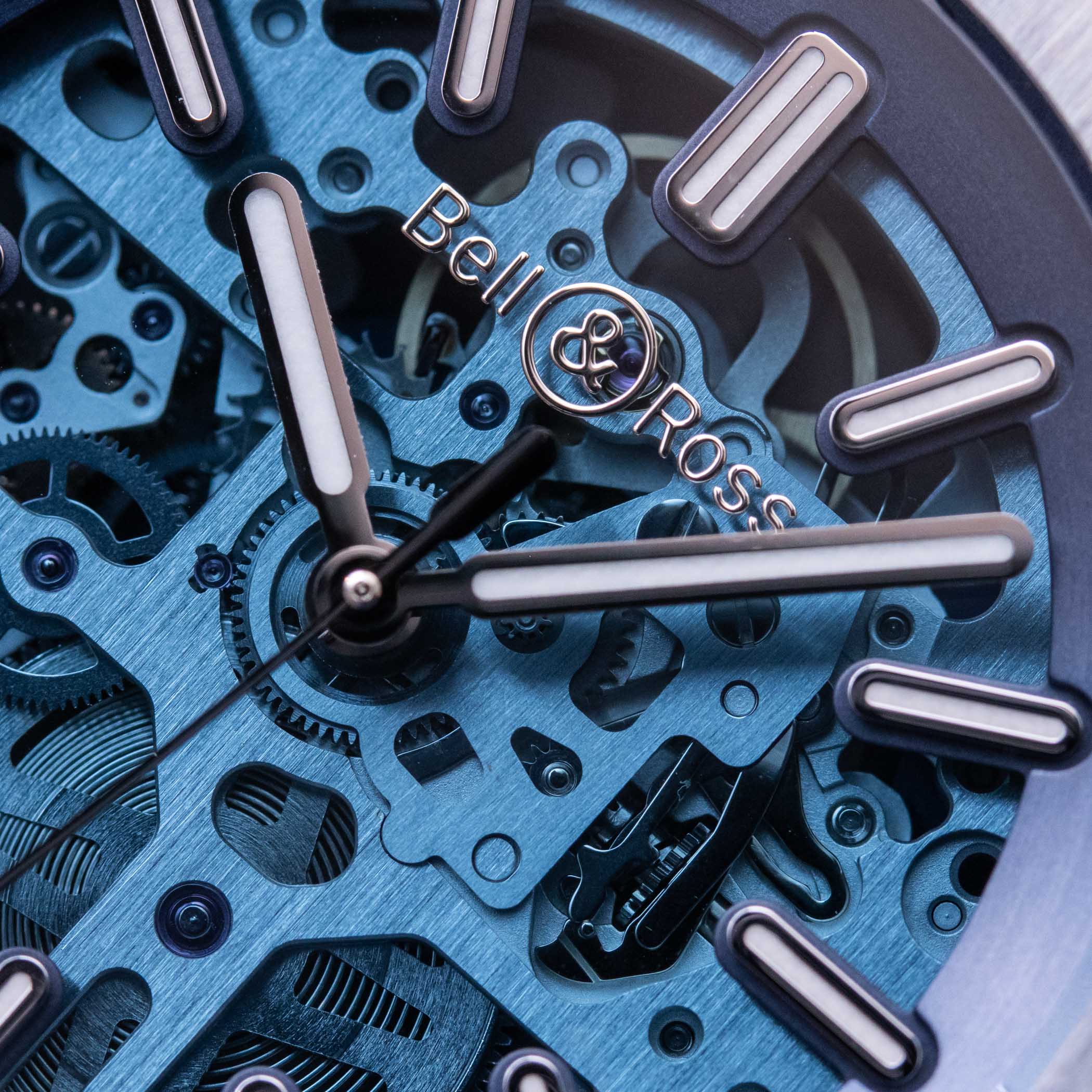 Inside the case is a well-known base movement, being the Sellita SW 300. This alternative to the ETA 2892 is here visually modified but retains its specifications, meaning a 4Hz frequency and 42h of power reserve. The sapphire back reveals an openworked rotor coated in blue and matte-finished bridges. 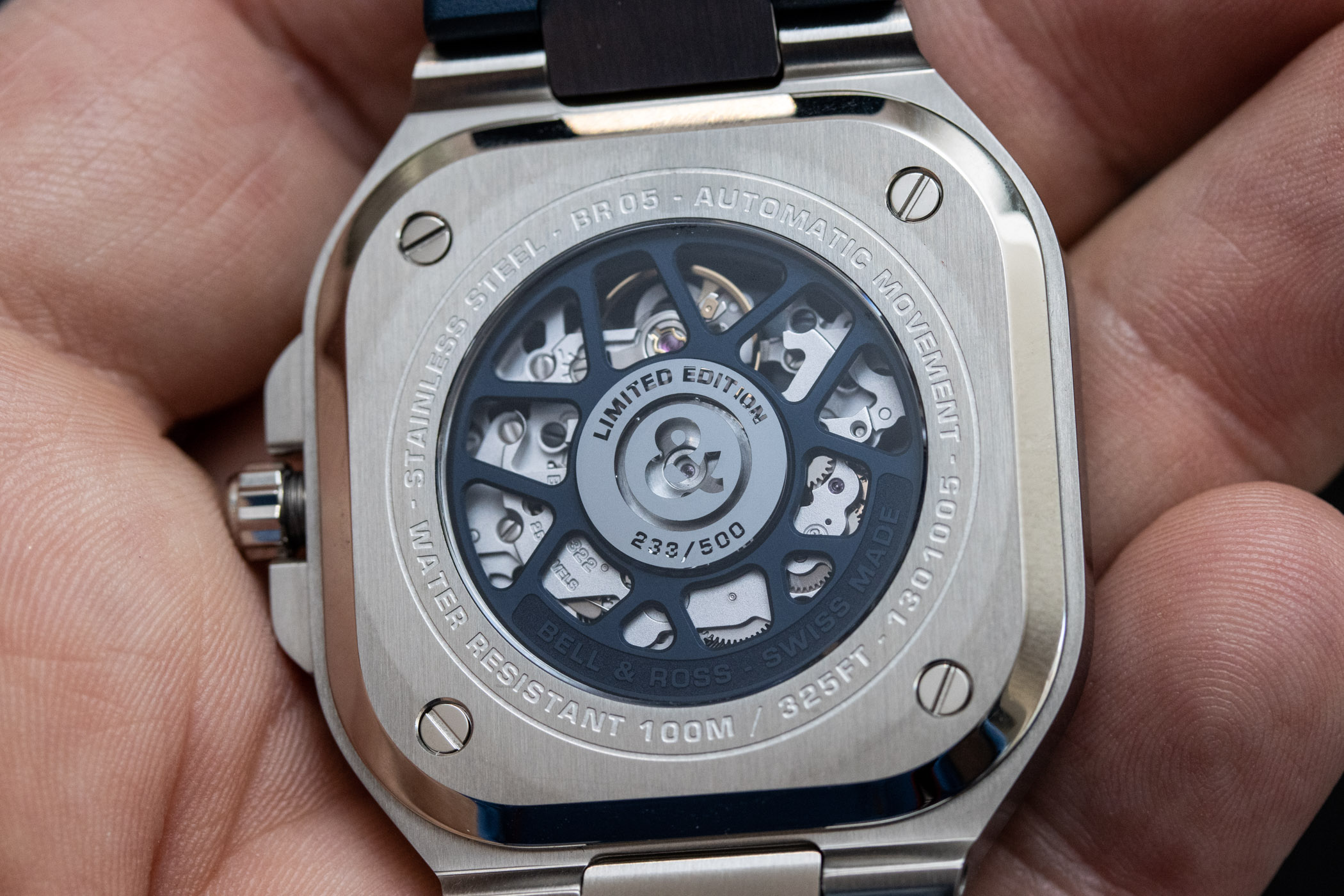 The Bell & Ross BR 05 Skeleton Blue is a limited edition of 500 pieces. It is now available from retailers and at from Bell & Ross’ online boutique. It is priced at EUR 5,900 on rubber strap and EUR 6,400 on steel bracelet. More details at bellross.com.