Inspired by dashboard flight instruments… This statement alone could easily define most of Bell & Ross’ creations. Whether we talk about the design of the watch itself, its features or the quest for optimal legibility, both day and night. The latter is particularly important for today’s matters, since there’s a new watch in the LUM collection. Dubbed “GREY LUM”, it follows a series of watches with a clear focus on display qualities, with the HOROLUM, the HOROLUM and the FULL LUM. But before we take a closer look at this cool collection, let’s introduce the new Bell & Ross BR 03-92 GREY LUM.

If the 3 previous models in the LUM collection were clearly on the military/tool side of things, this new GREY LUM wants to adapt the concept to a more urban style – but without forgetting its main raison d’être and its LUM membership. On the contrary of HOROLUM, HOROLUM and FULL LUM, which all feature micro-blasted (and thus anti-reflective) case in steel or ceramic, the new GREY LUM is about industrial design and monochromatic look, with more civilian than military DNA. 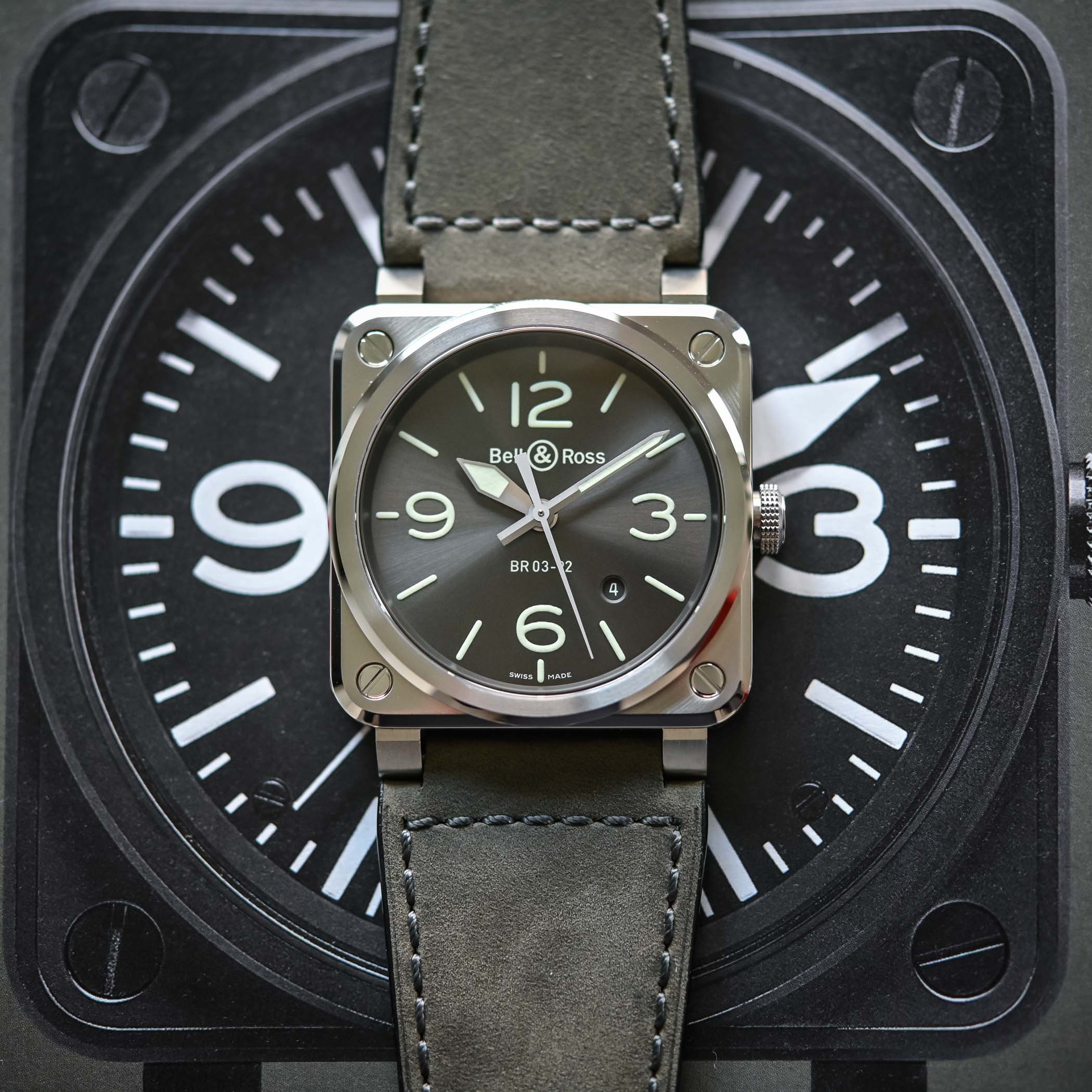 The case retains the iconic “circle within a square” shape, flanked by 4 functional screws – one in each corner – with an inspiration that can easily be traced in vintage jetfighters dashboard instruments. As all models in the BR 03 sub-collection, and like almost the entire B&R catalogue now, it measures sizeable but yet still comfortable 42mm x 42mm (the iconic BR 01 was 46mm). The case of the BR 03-92 GREY LUM is made out of stainless steel and bears satin-finished surfaces highlighted by polished bevels on the sides of the case and bezel. This adds a more luxurious, less instrumental touch to this watch – more suitable for daily wear. 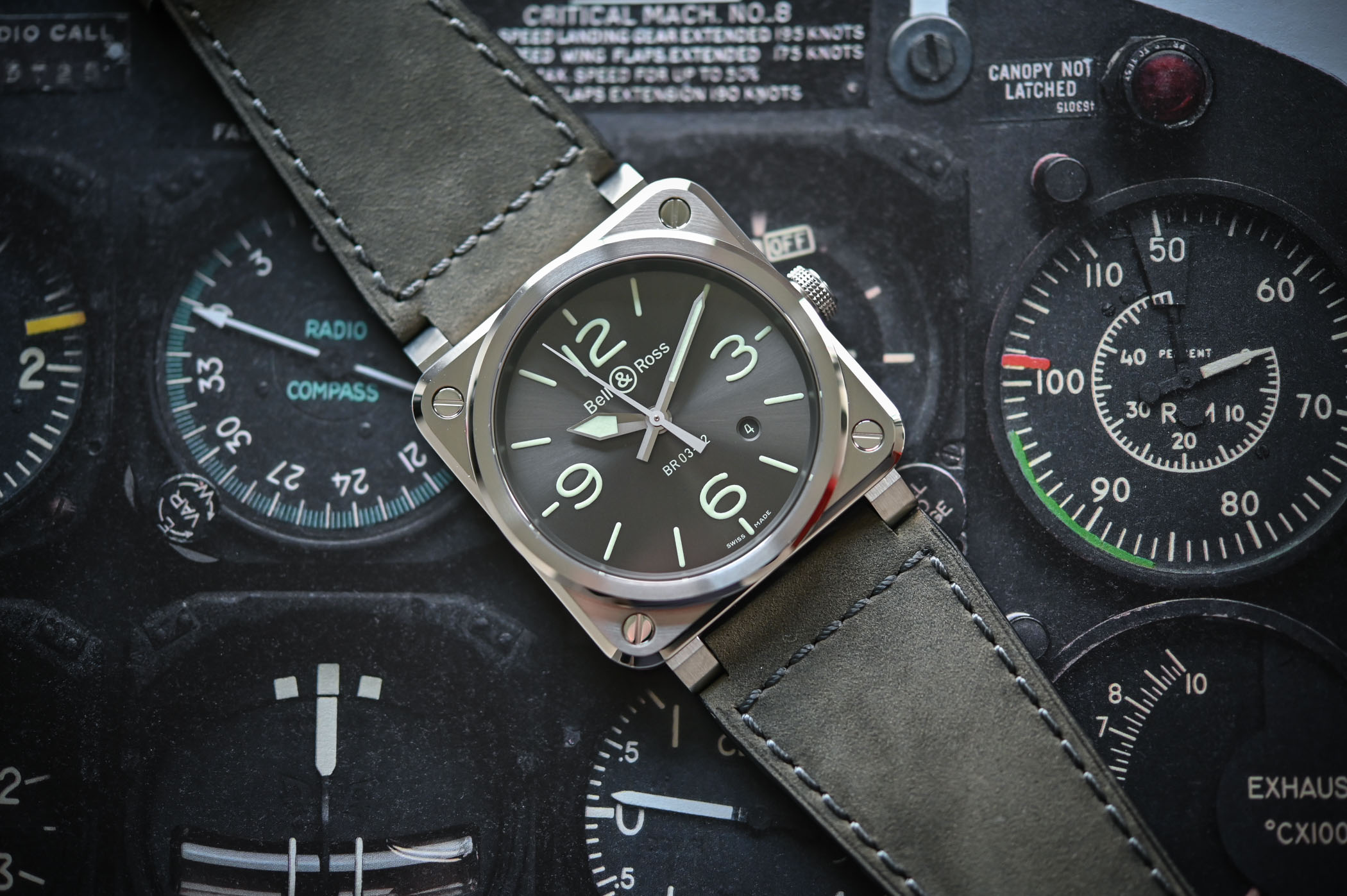 The dial of the BR 03-92 GREY LUM, during daytime, shows a nice anthracite grey colour with a sunray-brushed pattern. Combined with the contrasting surfaces of the case and the matte, grey‐green leather strap with a smooth texture, it results in a pleasant watch that isn’t void of elegance – at least for a B&R. The display is classical, with H-M-S in the centre and a date positioned in a circular window at 4h30. The hands and indexes are executed in C3 lume, with a cream colour that contrasts perfectly with the dark grey background.

And then comes the night… Because, as other members of the LUM collection, the new BR 03-92 GREY LUM is all about photoluminescence and high nighttime legibility. As said, all the indexes and hands are coated with Super‐LumiNova C3, known for its unrivalled brightness – it is the brightest version of SLN, the one with the longest phosphorescence (up to 8 hours) and the fastest to re-charge. Turn the lights off and you end up with a super legible watch that won’t look out of place on the wrist of a pilot, in a cockpit.

Like all models in the collection, the new BR 03-92 GREY LUM is powered by the calibre BR‐CAL.302, based on the tried-and-tested Sellita SW300. This automatic movement is known for its reliability and its decent precision. It runs at 28,800 vibrations/hours and boasts 42h of power reserve. It is hidden under a plain steel caseback that allows for a 100m water-resistance. 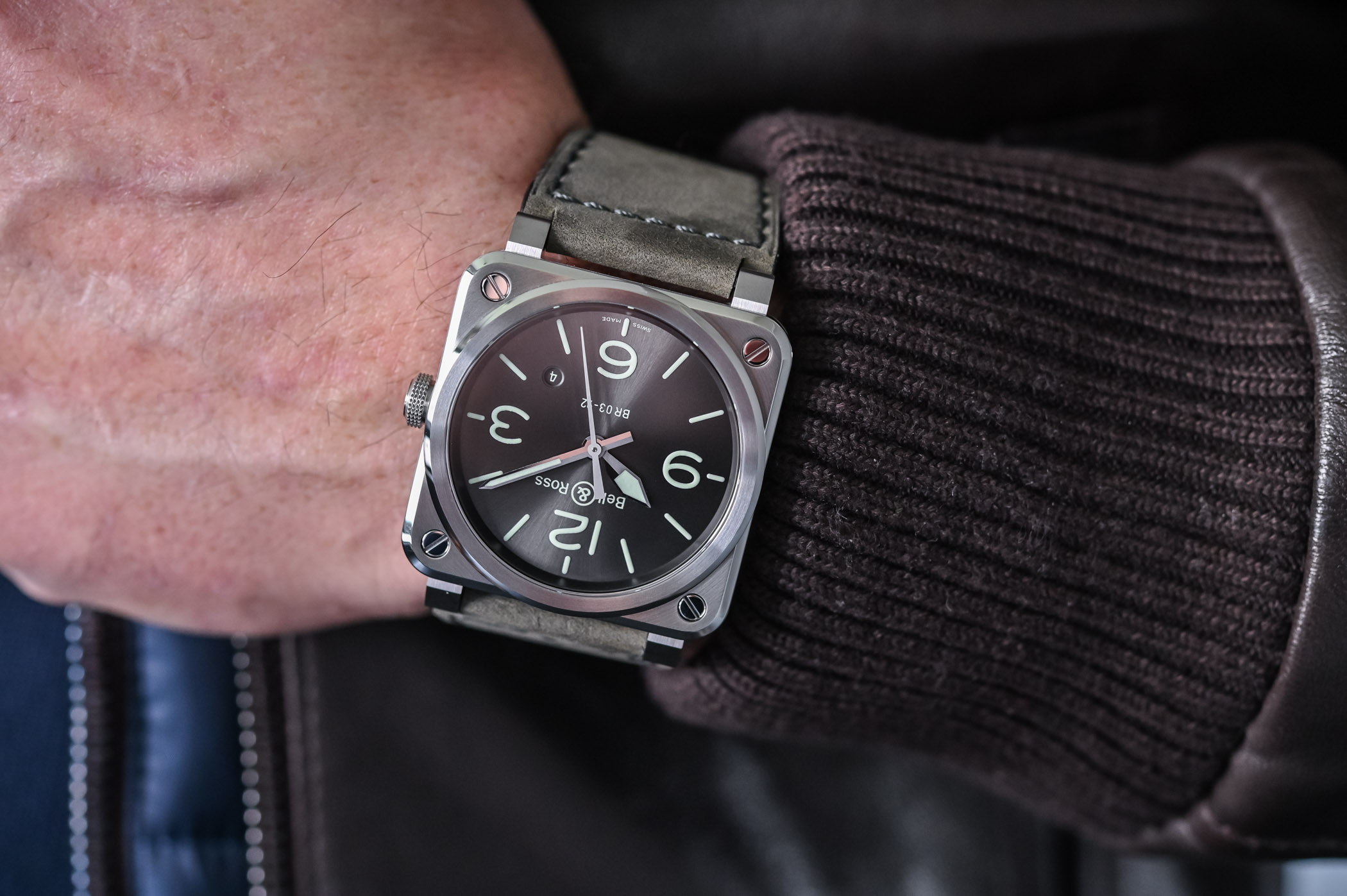 The new Bell & Ross BR 03-92 GREY LUM (ref. BR0392-GC3-ST/SCA) will be available soon (February 2020) at retailers, official boutiques and e-commerce. It is delivered with an additional ultra‐resilient black synthetic fabric strap and tools to change it. It will be priced at EUR 2,990. More details about the watch and orders here, at www.bellross.com.

As mentioned earlier, the new GREY LUM is part of a sub-collection that Bell & Ross dubbed “LUM”, a reference to the word lumière in French, which could be translated by light. No need to turn around the topic, the intention here is crystal clear: offering maximum legibility in all conditions, whether to bring contrast and avoid reflections during the day, or bringing maximum luminescence at night, with massive use of Super-LumiNova. And all in all, this is a direction that goes well with the spirit of the brand, back when the original concept was to craft military watches for pilots or special forces – which it still does.

The LUM collection finds its inspiration, once again, in dashboard flight instruments, such as altimeters, radars, gyroscopes and compass found in all types of planes – both for civilian and military applications. Here, legibility and clear indications are essential for navigation, and that in daylight or nighttime conditions. Hence why such instruments are highly contrasted and avoid reflections, as well as featuring glowing light allowing to be read even in the darkest hours. You can easily understand that when looking at the two images above, from a civilian aeroplane or in the cockpit of a jet fighter. 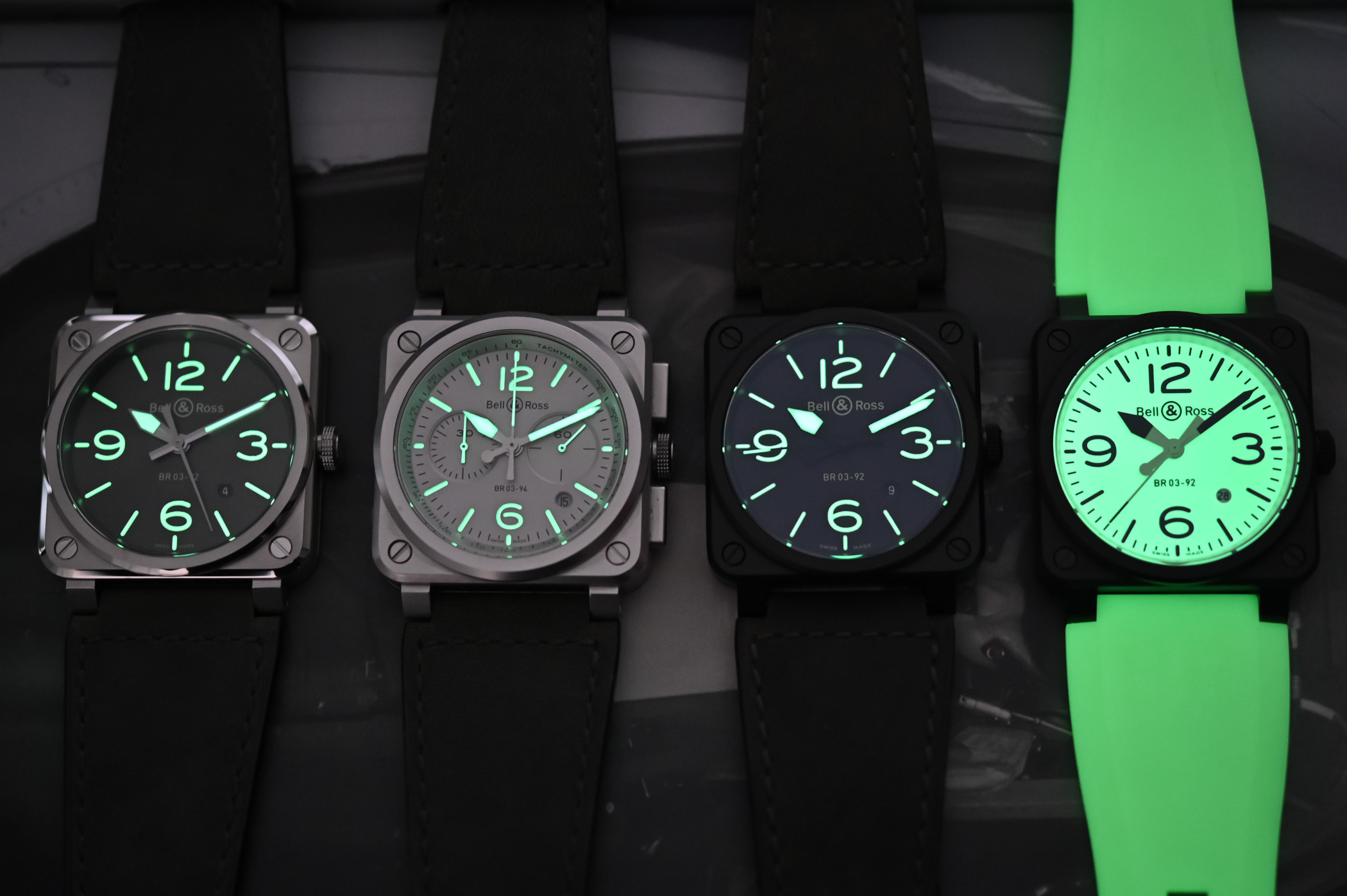 The Bell & Ross LUM collection is composed of various models. It all started in 2017 with the HOROLUM (available in BR 03-92 with 3-hand display, or like here, in BR 03-94 with chronograph), followed in 2018 by the NIGHTLUM, then the FULL LUM in 2019 and, early 2020, the GREY LUM. All have their own specificities, but all share the same concept of dual legibility, night and day. Matte cases, high contrast of the indexes and hands, dial largely relying on the SLN capacities… And altogether, a toolish, instrumental look that has been B&R’s motto since its creation.

With these 4 watches, it is all about effectiveness and immediate readability of the timing indications. Starting with the HOROLOUM, the concept was to have a stainless steel case with reflections reduced to the bare minimum. Hence why this first model was entirely micro-blasted, dial included, so even though its case is bright, it won’t disturb a pilot with reflections. The monochromatic look is enhanced by the use of green-cream SLN on all the hands, resulting in a clear display, even of the chronograph indications, at night.

Second was the NIGHTLUM, a watch that showed a very B&R look with a matte black ceramic case and a matte black – once again to avoid reflections. Hands and indexes are largely relying on C3 SLN, bringing the desired contrast with the black background during the day, and offering super-efficient lume effect at night. Certainly the most instrumental model in the collection.

In 2019, Bell & Ross launched a very surprising, bold and slightly gimmick piece named FULL LUM. Built around a matte black ceramic case, it has a rather special colour during the day – hard to define, as sort of a mix between grey, cream and light green. Still, with its hands and indexes executed in black, daytime legibility is unrivalled. And then comes the night… And the FULL LUM becomes something else! Not only the full dial is coated with Super-LumiNova – the indexes and hands appearing in negative – but the rubber bracelet is also luminescent, creating a UFO of a watch that entirely glows green in the dark.

Last but not least, 2020 is the year of the fourth model in the collection, the GREY LUM that you’ve seen at the beginning of this article. Once again, a nice addition to the brand’s core collection, based on pilot’s and military watches.