The Rolex Daytona is a watch that needs no introduction anymore. It is, without doubt, one of the most significant watches in Rolex’s portfolio, one of the most revered watches in history, and also one of the most sought-after models on the market. While the stainless steel edition is, understandably, the most famed version, the Daytona is a watch that also works great in precious metals, with countless editions released so far. This year, the brand has decided to extend the collection with 3 new (but in fact more than that…) highly exclusive models, all fitted with dials that could be named “Meteorite Panda” and today we take a look at the most vibrant of them all, the full yellow gold 116508.

The Rolex Daytona is a watch that can easily accommodate the Midas touch. Whether in a slightly pared-down when equipped with a Cerachrom bezel and an Oysterflex bracelet or in a very (very) flamboyant attire when it receives the so-called Rainbow treatment – the latter being one of the most unattainable models in Rolex’s collection… But it’s quite OK after all, the Daytona has long become a statement piece. 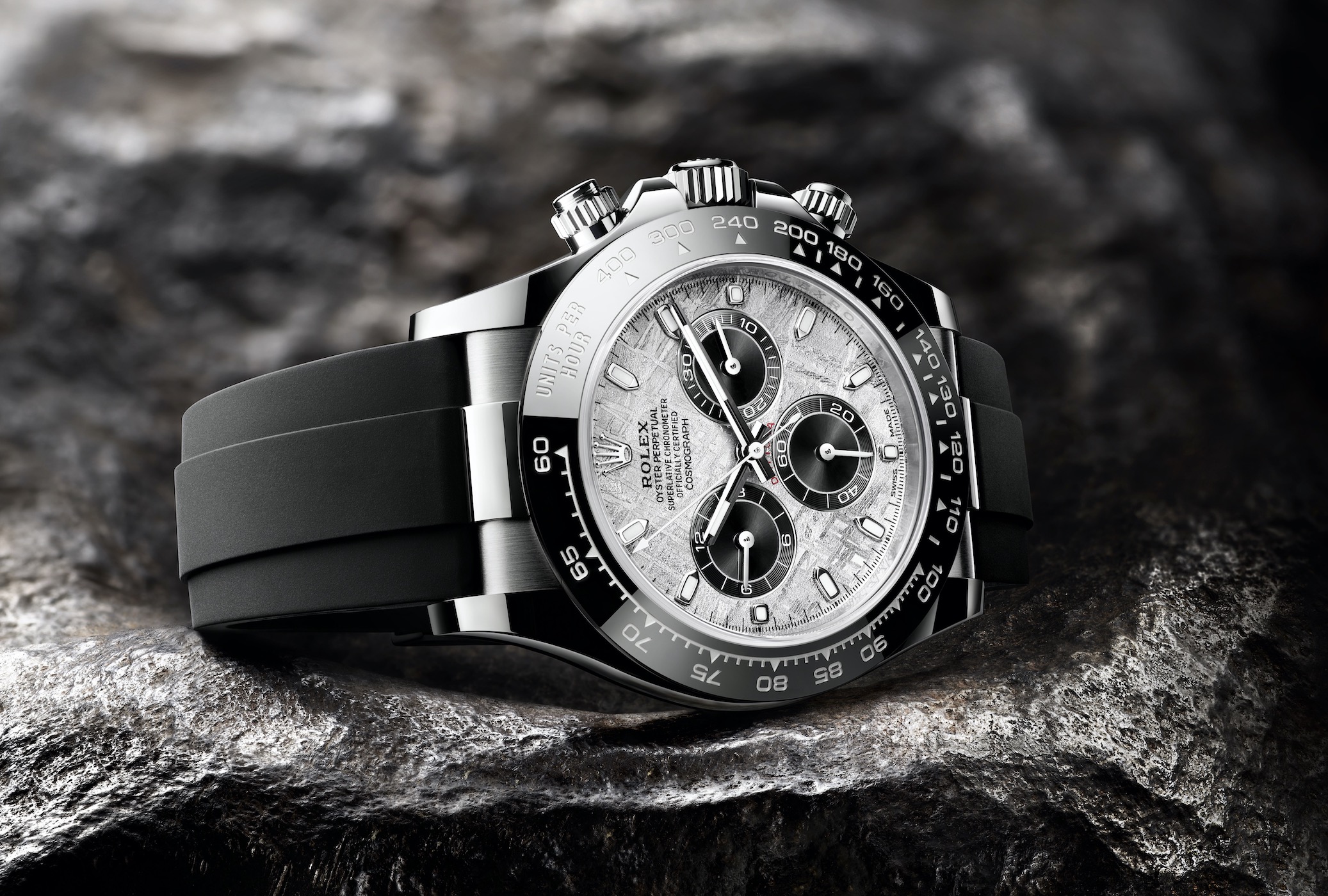 For its 2021 collection, Rolex has presented new editions of the Daytona, all with “Meteorite Panda” dials – the novelty being in these contrasting sub-counters, as the concept of a meteorite dial on the Cosmograph is far from new. According to the initial communication of the brand, there’s a version with an 18k white gold case, fitted with a black Cerachrom bezel and an Oysterflex bracelet – the most subtle of the three and a very appealing model, and the one most advertised by the brand. Additionally, Rolex also launches two full gold models, one in 18k Everose gold and one in 18k yellow gold, both with a metal bezel and solid gold Oyster bracelet. But that’s for the official communication of the brand, as the meteorite dial is available in more variations… More on that at the end of the article. 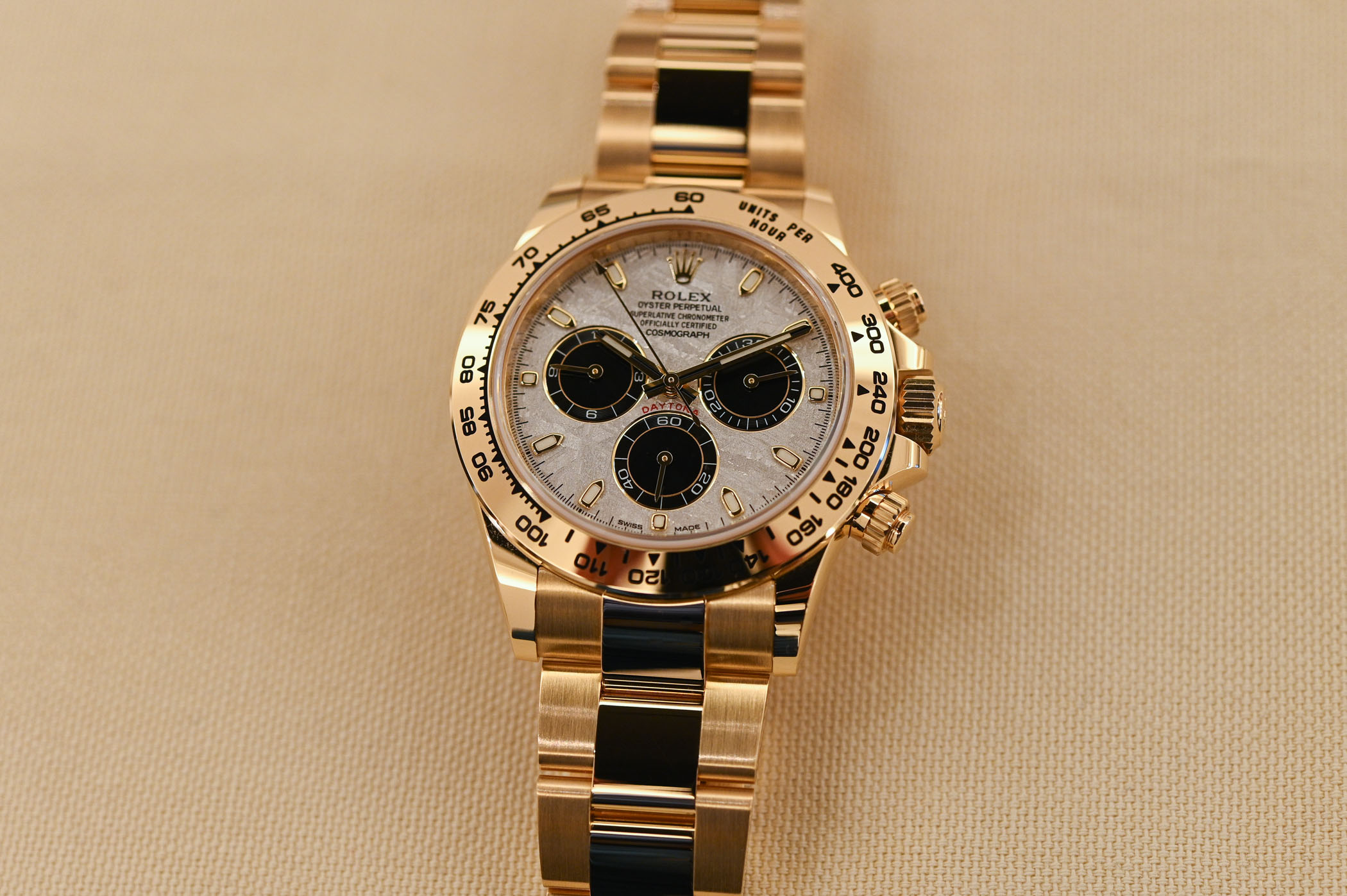 Following our first look with the Explorer 36mm models and the revamped Explorer II, our early meeting with the Crown offered us the opportunity to have a look at the Rolex Cosmograph Daytona Meteorite reference M116508-0015 (to be very precise), thus the full yellow gold edition… A watch with, let’s be honest, quite some flamboyance.

As explained in our introducing article, the main novelty for this trio of Daytonas is their dial made out of metallic meteorite. As said, this isn’t a first for the model, which has received such dials already in the past. Yet, it was mostly seen on the ref. 116509, a white gold version with a silver-coloured meteorite dial, applied Roman numerals and matching sub-counters.

What’s new this year is the fact that the sub-dials are now done in black, bringing better legibility, more contrast and a sportier look. Also, gone are the Roman numerals, replaced by more modern luminescent applied markers, as well as luminescent hands, partially filled with black PVD. 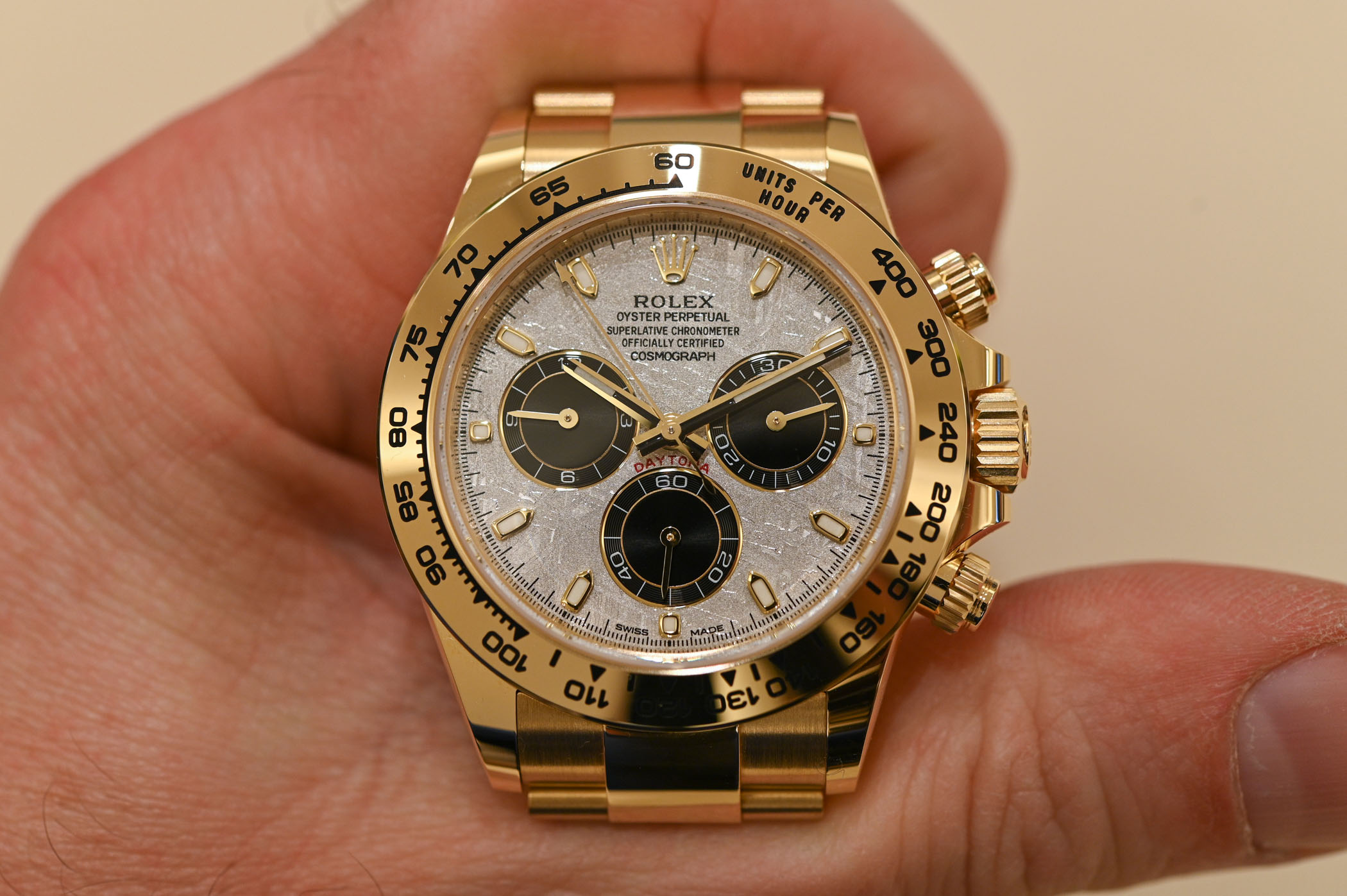 The base for the dial is a classic so-called metallic meteorite, thus an outer-space material coming from an asteroid that exploded millions of years ago. As explained by the brand “on the voyage between planets, fragments of this natural extraterrestrial material, primarily composed of iron and nickel, cool by a few degrees Celsius every million years, creating unique, distinctive crystallization within the material that is impossible to recreate on Earth.” This results in a fascinating texture, an interwoven internal structure known as Widmanstätten patterns. 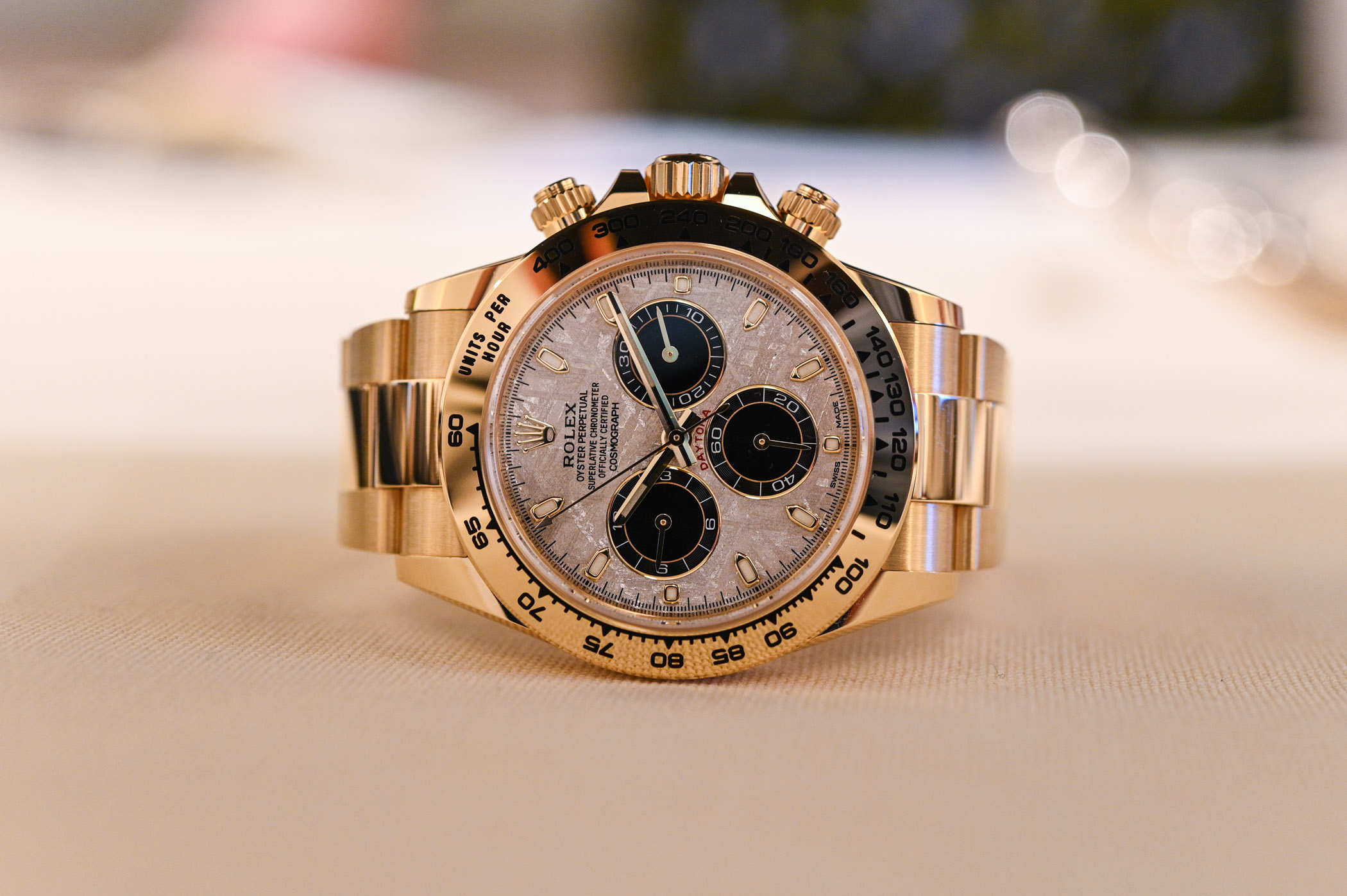 So, how does it feels in the metal…? Well, oddly attractive and far better than previous editions of Meteorite Daytonas with Roman numerals. There’s something quite fascinating in meteorite, due to the uniqueness of the patterns and the metallic brilliance of the material, which plays a lot with ambient light and reflects its environment like no sunray-brushed dial can. What’s quite interesting here, due to the panda layout, is that from a distance, the watch will appear quite classic, with a traditional dial. Only when you come closer, the true nature of the material will reveal itself.

As for the full gold attire of the watch, specifically in yellow gold, it isn’t the most discreet, obviously. But on the other hand, it is once again oddly attractive and very well executed. Of course, you can go for a subtler version in white gold with a ceramic bezel. 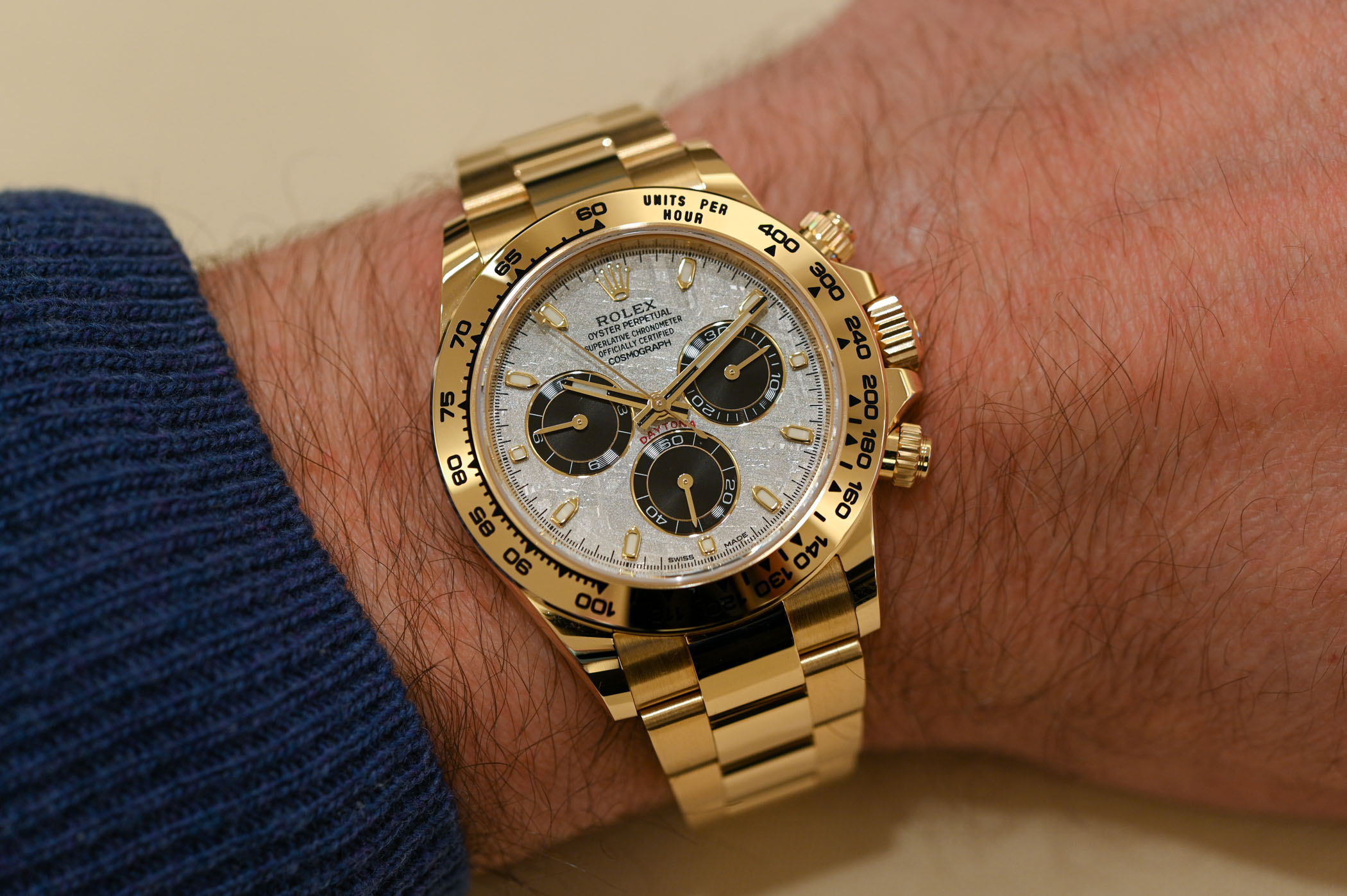 For the rest, no evolution. Apart from these new dials, the watch is everything you’d expect from a Daytona; a 40mm case with crown guards, screw-down pushers, water-resistant to 100m, a Triplock crown, a tachymeter bezel and the Calibre 4130 inside. Featuring a column wheel and a vertical clutch, this modern self-winding chronograph is fitted with a blue Parachrom hairspring. Its power reserve is of 72 hours when fully wound. A Rolex Superlative Chronometer, its precision is in the order of −2 /+2 seconds per day.

A total of 6 “Meteorite panda” daytonas

Rolex being Rolex, a look at the website and the online configurator is always a good idea. While the brand has decided to emphasize only 3 editions, the “meteorite panda” dial will be offered in many more iterations. You prefer the ceramic bezel, but want an Everose gold case? Sure, it’s possible. You want a white gold case with an Oyster bracelet? Possible too. In fact, both combinations – Cerachrom bezel with Oysterflex bracelet or metal bezel with Oyster bracelet – are available in the 3 gold alloys – 18k yellow gold, 18k white gold and 18k Everose gold. So all in all, there will be 6 versions of the Daytona meteorite panda available.

For more details and prices in your area, please visit rolex.com.