Start Bloggers Corner Editorial – The Continuous and Insane Rise in the Price of the...

The Rolex Daytona a watch that I’d love to own one day. Along with the Speedmaster, it is one of the most iconic chronograph watches on the market; and one of the best in terms of quality and specifications. But I am never going to pay a 100% premium over retail price to acquire a watch (really, NEVER). Still, I occasionally track the prices of the Rolex Daytona 116500LN on the second-hand market. Last time I checked, these were listed at around EUR 25,000 or USD 30,000, which I thought was already quite insane (that is double the retail price). This morning I woke up, and an ad for a Daytona popped up in my Facebook feed with a price of EUR 35,000. First, I thought it was a joke or a mistake. How could the price have jumped EUR 10,000 in just three months? To my surprise, it was not a mistake, and I confirmed it by looking at Chrono24’s tracking tool. Indeed, the Rolex Daytona 116500LN has become even more inaccessible than I had ever imagined.

As far as I can remember, I’ve been following the watch market for about 10 to 12 years and have been actively searching and writing about watches for seven years now. My track record isn’t the longest, but it’s already long enough to remember what it was like “in the old days” when a stainless steel Daytona (back then, reference 116520, with a steel bezel) could be yours, on the second-hand market, for about EUR 9,000 or USD 10,500. I’m not talking about three decades ago. I’m talking about average prices in 2013 or 2014 when the Daytona was certainly not the easiest watch to get from your authorised dealer, but a watch that was attainable at retail price (if you were patient) and could be bought for about the same price on the second-hand market. Those days are long gone, and the introduction of the steel Daytona with a Cerachrom bezel in 2016 changed the market drastically!

I can distinctly remember being at the Rolex booth when this watch was launched. The watch generated incredible tension, something that I never experienced again. Everybody was looking at it as a true gem, a watch that, from day one, was destined to succeed. This was also the day I discovered the pressure exerted on authorised dealers. I can remember hearing people in front of the booth, looking at the display windows, calling their AD to reserve one of the first examples. And this is when the whole speculation started. From day one, as soon as the watch was introduced, the situation was sealed. You want a 116500LN? Sure, put your name on the waiting list, wait for an undefined period of time – without the guarantee of getting one in the end – or pay a premium. Period, basta, over and out.

As you can see from the Chrono24 report for an unworn white dial 116500LN (which basically averages the price of all equivalent models for sale on this platform), as soon as the watch was introduced, it was already selling on the second-hand market at a premium. We were still talking about EUR 17,000, compared to a retail price in 2016 or EUR 11,300. That meant a 50% premium over retail price. The situation remained steady for a couple of years until prices started to climb again in 2018 to reach approximately EUR 20,000 and then about EUR 23,000. And this trend continued for another couple of years.

Earlier this morning, as I was taking a closer look at the current state of the market for a steel Rolex Daytona, I discovered that prices have skyrocketed to unprecedented levels in the past couple of months. We’re not talking about a 1K or 2K increase; we’re talking about a 10K increase: prices have risen about 30% since the end of 2020. See for yourselves… EUR 28,000 or USD 34,000 is about as low as you’ll have to pay (at least according to the listed watches) for a black dial Daytona. And the white dial, as always, is about 3K more.

Looking closely, here’s what you’ll get when using the tools offered by Chrono24 – which, I must say, are very practical. Let’s start first with the most coveted of the two steel Daytonas, the white dial edition (prices in EUR and USD)

And then, the same applies for the slightly less – relatively speaking –  sought-after black dial Daytona 116500LN. Funnily enough, the black dial 116520 used to be the most praised of the two versions, and the introduction of the ceramic bezel reversed the market.

The graphics above, depicting the situation of the market over the past year, are clear and irrevocable. Since late January, the price for the steel Daytona has inexorably climbed to reach the levels of a new gold Daytona. Remember that a 116500LN is listed at about EUR 12,400 or USD 13,500. We’re not talking anymore about a 100% premium over retail price, as we reported in this market analysis in late 2019. The steel Daytona is now facing a completely insane (at least to me) premium of 162% – yes, that’s about 2.6 times the retail price for a steel watch produced in several thousands of pieces a year.

The situation doesn’t stop here. Not only does it affect the steel models, but also the Rolesor (in smaller proportion) and some of the gold editions, too – we won’t even discuss the ultra-exclusive Daytona Rainbow 116595RBOW here, which is sometimes listed for about four times its retail price. For instance, the white gold ceramic model worn on an Oysterflex bracelet, the reference 116519LN, has a retail price of about EUR 28,000 or USD 30,000. For some years, it was a watch that you could find on the second-hand market at retail price levels, often for slightly under official retail prices. But since early 2021, it is facing the same situation as the steel editions, with a continuous and impressive increase in price, as you can see below: 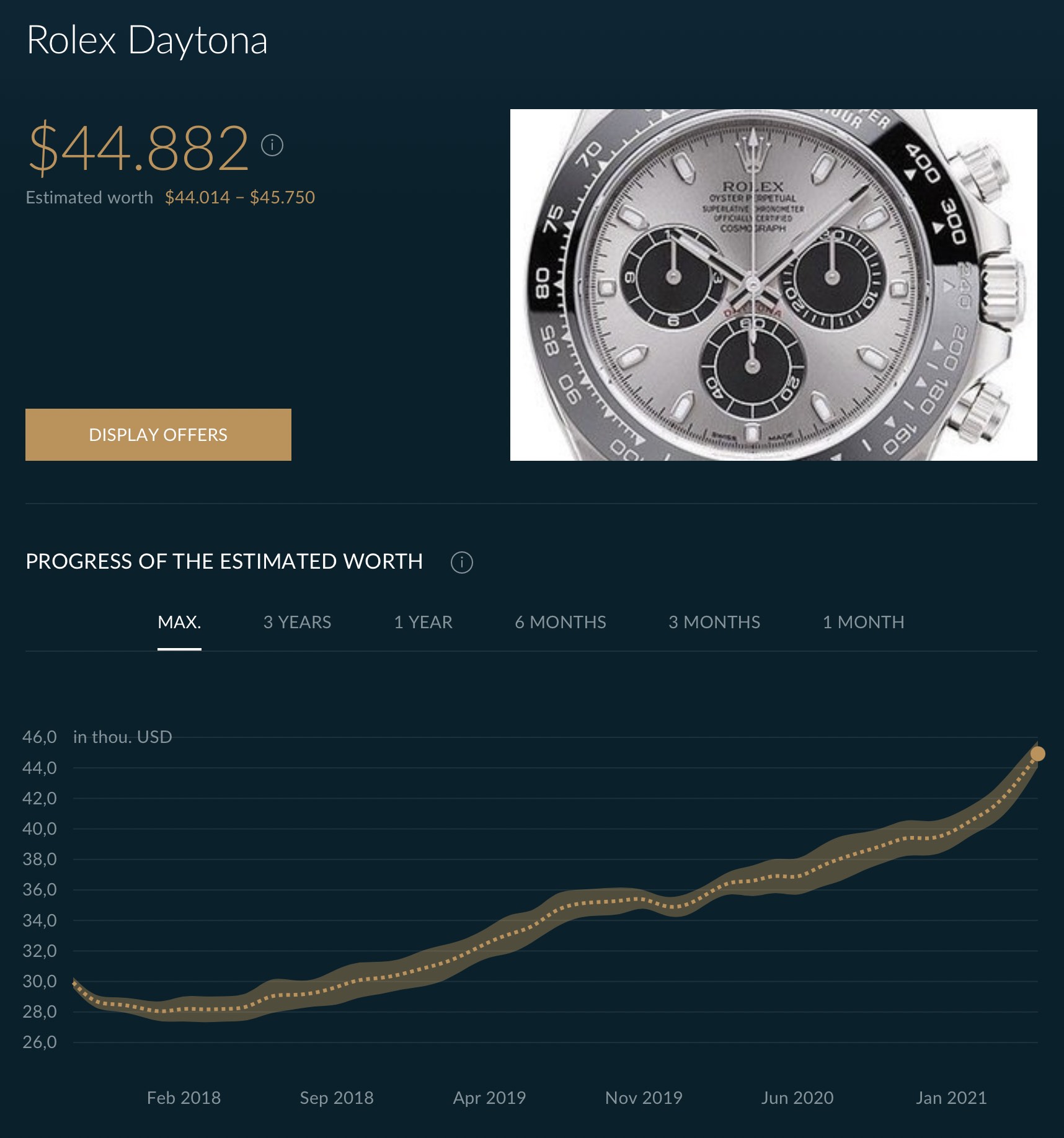 Surely, the premium is only 30%, which is still low compared to what’s happening with the steel models, but this simply reflects the overall market situation. PS: don’t use this as a piece of advice to invest in these gold 116519LN.

I might disappoint some of our readers here, but the more I think about it, the less I understand this market. Before devoting myself to watches, I used to work in finance and to manage funds. If I apply everything I learned at university, I still can’t come up with a tangible explanation. I simply can’t find a logical, consistent reason for the desirability surrounding this watch. Don’t get me wrong, the Daytona is an excellent watch, and I still believe that, at retail price, it delivers superb value for the money. The watch is superbly crafted even though it is primarily machine-made, and the look (always debatable, of course) is great. The movement is one of the best in this category, and the bracelet is excellent. Objectively speaking, if you manage to pay 12K Euros (retail price) for one, the Daytona is a watch that is worth every penny. But is it a watch that is worth EUR 35,000? In my opinion, absolutely not. This kind of money can buy (pick your favourite) 1. precious metals 2. hand-finished movements 3. complications 4. soul-driven independent watchmaking. 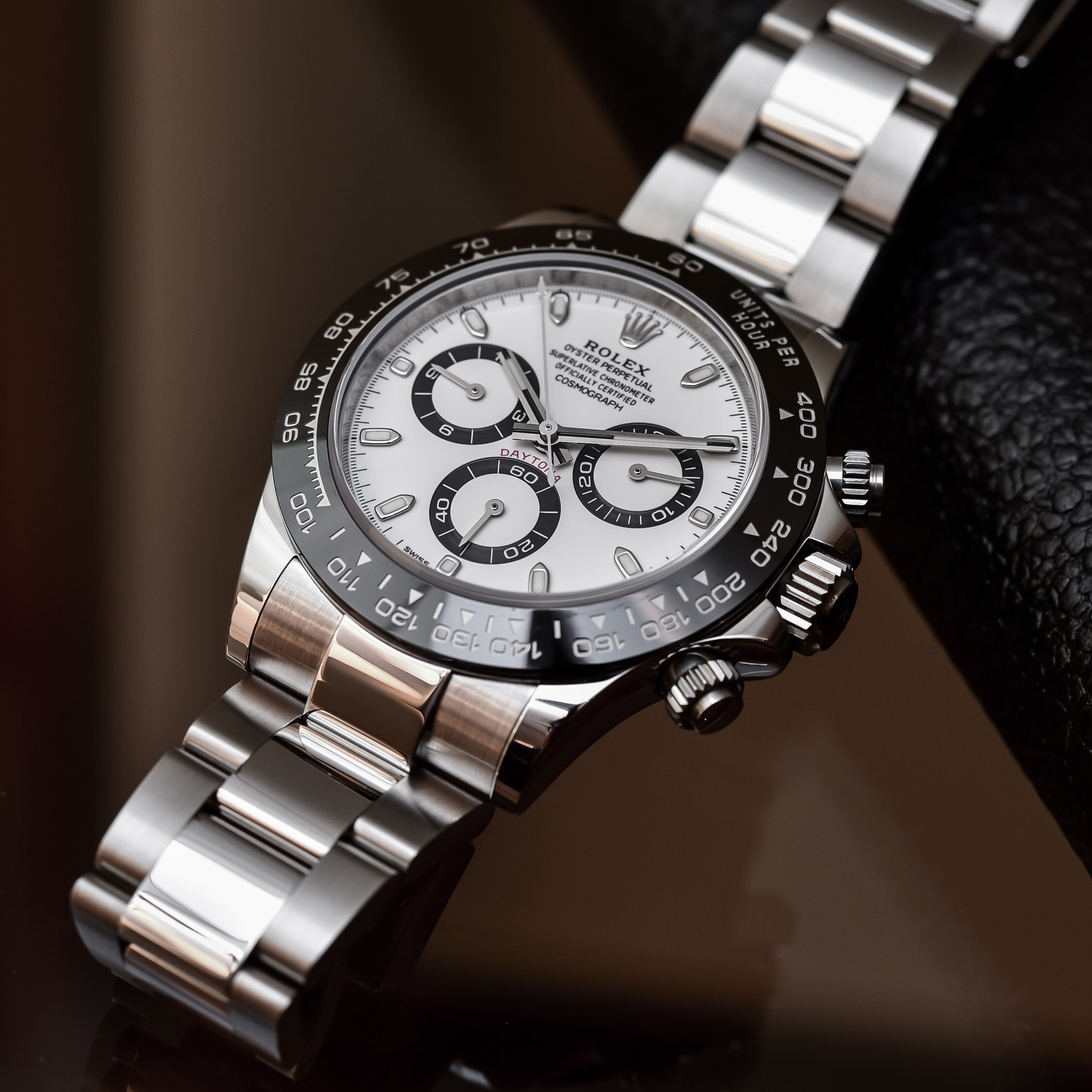 So, what could be the explanation behind the recent increase? We all know that the current sanitary situation is not helping markets, and volatility has been high on stocks – “has been” is essential here. If you look at the VIX index, which measures the level of stress on the stock exchange markets, it has returned to relatively standard levels. So, that’s not the reason. Also, the sanitary situation had affected production in March/April 2020, but since then, all Swiss manufacturers, including Rolex, are producing watches at nominal capacities.

The only reason I can think of is what I’d call “the sheep effect”. It all comes down to the simplest of notions in economy: supply and demand. That really is the only reason I can come up with. It is all due to a snowball effect, where the more sought-after an item is, the more desirable it becomes; the higher the demand, the lower the supply. And lower supply translates into desirability. And the fact that the watch can be seen everywhere on Instagram, while not being available to a broader audience, only creates frustration and the desire to want one – and not for tangible reasons anymore. Just like the Nautilus 5711 or the Audemars Piguet 15202ST, these watches are not desired by those who really love the watch (the object and what it represents in terms of horology) but by those who think it is something to own, and that has become a tool for speculation. Here it is, I said it, the Daytona isn’t, for now at least, a watch in the strictest sense of the term. It is an investment vehicle for owners or wannabe owners. 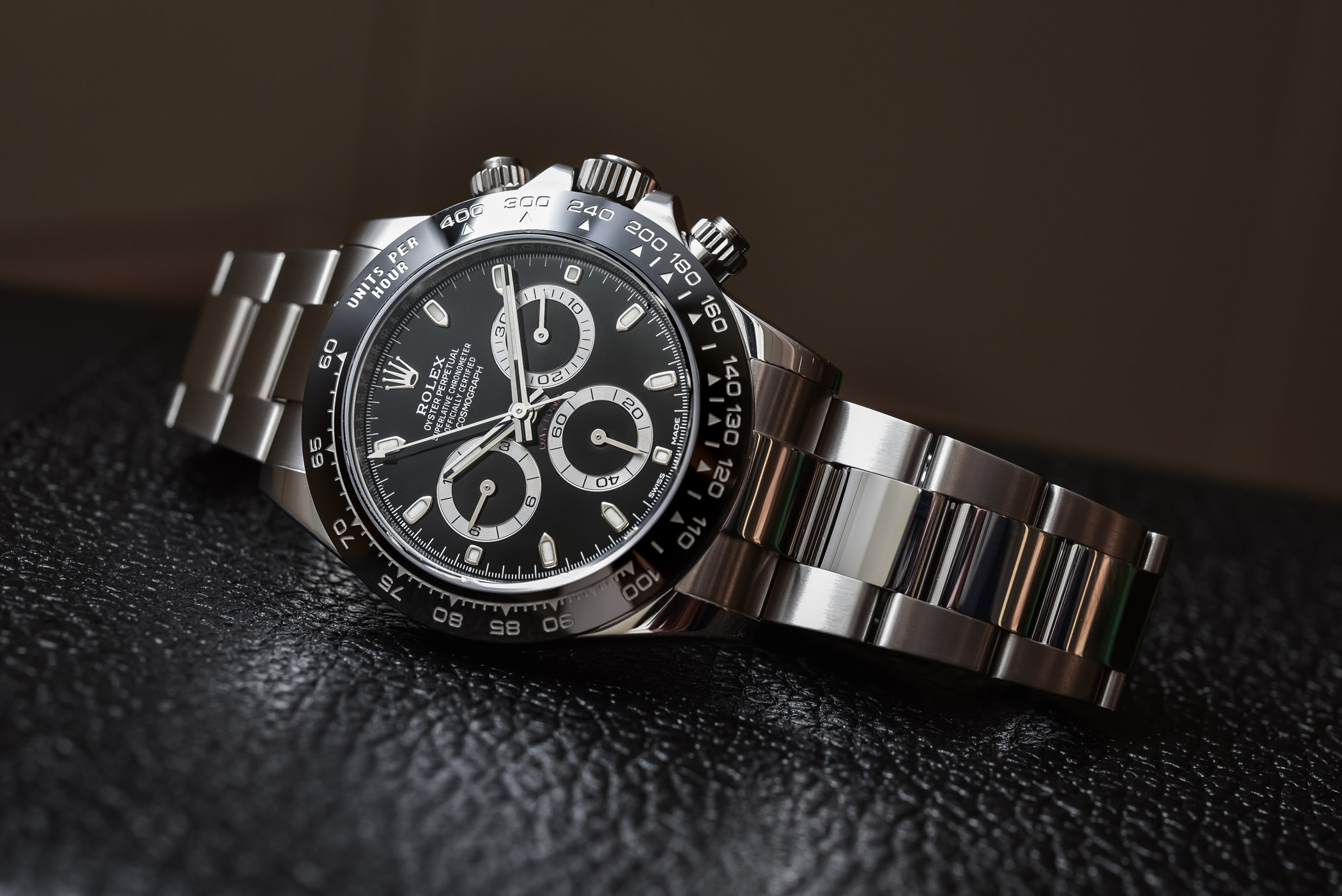 Should we blame Rolex for this? We very often hear complaints regarding the unattainable status of steel Rolex watches, specifically the Daytona. And, judging by the frustration of many potential owners, it is somehow justified but not entirely relevant. Two things to keep in mind; one, Rolex produces A LOT of watches, more than it has ever produced in the past. Rolex is producing and delivering watches in large quantities; according to recent research, Rolex produced about 800,000 watches in 2020 despite halting its manufacturing in spring (source: Morgan Stanley). But because of the high-quality standard of the brand and because of the size of its production unit, it might not be able to produce far larger quantities. The question is: would Rolex want to risk flooding the market? Potentially not the best solution.

Also, keep in mind that Rolex doesn’t sell watches direct to customers. It only sells to authorised dealers. When it comes to distributing watches to final clients, the situation is in the hands of these ADs, not in the hands of Rolex and only the can decide on allocations. Once the brand has delivered the watches to its local subsidiaries, which deliver them to local stores, Rolex can’t control the way the watches are sold and to whom. There have been some recent situations where Rolex removed certain dealership authorisations following bad practices. The brand is aware of this, but since we’re living in a free market, this won’t be an easy task. We might not be happy with that, but truth is that we, collectors and watch enthusiasts, have started the situation… helped by the presence of a few so-called flippers and unfair retailers.

If that’s a watch you’re looking for and not an investment, be reassured, the market has plenty of other models to offer. Just think about why you really want a Daytona…?