StartBloggers CornerCelebrating 100 Years Of The Iconic Cartier Tank – Part 1, The...

Celebrating 100 Years Of The Iconic Cartier Tank – Part 1, The First One, The 1917 Tank Normale

If you were to ask your fellow watch-lovers what they thought was the ultimate, chic dress watch for men (or women), I would be confident in saying that the Cartier Tank – in one of its many variations – would feature very high on the list. Versatile, distinctive and instantly recognisable on the wrist, the Tank is, without doubt, one of the most unconventionally iconic watch designs of all time. So much so, in fact, that it’s hard to believe the ageless Tank turns 100 this year. Today, we’re looking back to where it all began, to celebrate not only everything the Tank has achieved for Cartier but also to try and understand what goes into making an icon.

A Stroll Through History

These days, the visual identity of the Cartier Tank is so well-known – and well-loved – that it’s hard to imagine this classic wristwatch ever being a revolutionary force in luxury watch design, and indeed in the watch industry as a whole. And yet, that’s exactly what it was. It helped change and shape an entire generation’s perceptions of and attitudes towards the wristwatch, ushering in a new era. To understand how and why it’s helpful to have some context of the period in which the Tank made its debut. 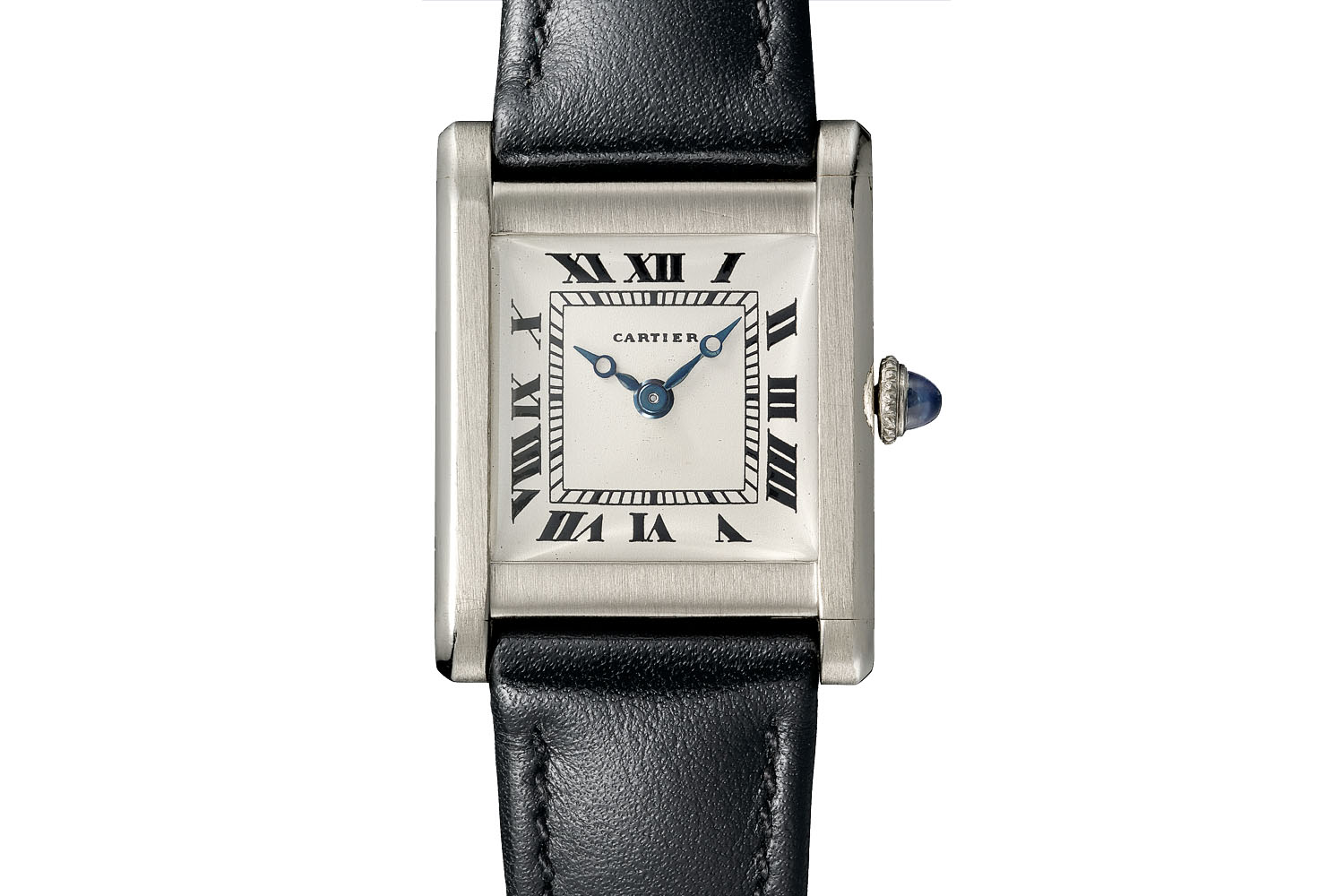 Nowadays, it’s generally agreed that the luxury wrist-watch market is male-dominated. You don’t have to walk too far into the halls of Baselworld to see that. Back in the late 19th to early 20th Centuries however, it was a different picture altogether. At that time, most men still relied on pocket watches to keep track of the time, eschewing wrist worn watches as effeminate trinkets, which were neither robust nor particularly accurate, and therefore not indicative of a gentleman’s social standing. It’s important to remember that most of the other iconic men’s watches of the 20th century, such as the Calatrava, the Datejust, the Reverso, and so on, were not created until the 1930’s and beyond.

Pioneering watches, like the Cartier Santos in its distinctive square case and the unrelenting focus on precision by Rolex in its early years helped to slowly change these perceptions, but perhaps the biggest influence was the advent of World War I, in which wrist watches played a prominent role. Due to the nature of The Great War and the difficulty decentralised military units had in communicating with headquarters, timing was of the utmost importance to ensure manoeuvres (such as attacks) were coordinated effectively. As such, the watch became an essential part of an officer’s kit, with the wristwatch proving far more convenient and practical than a traditional pocket watch. 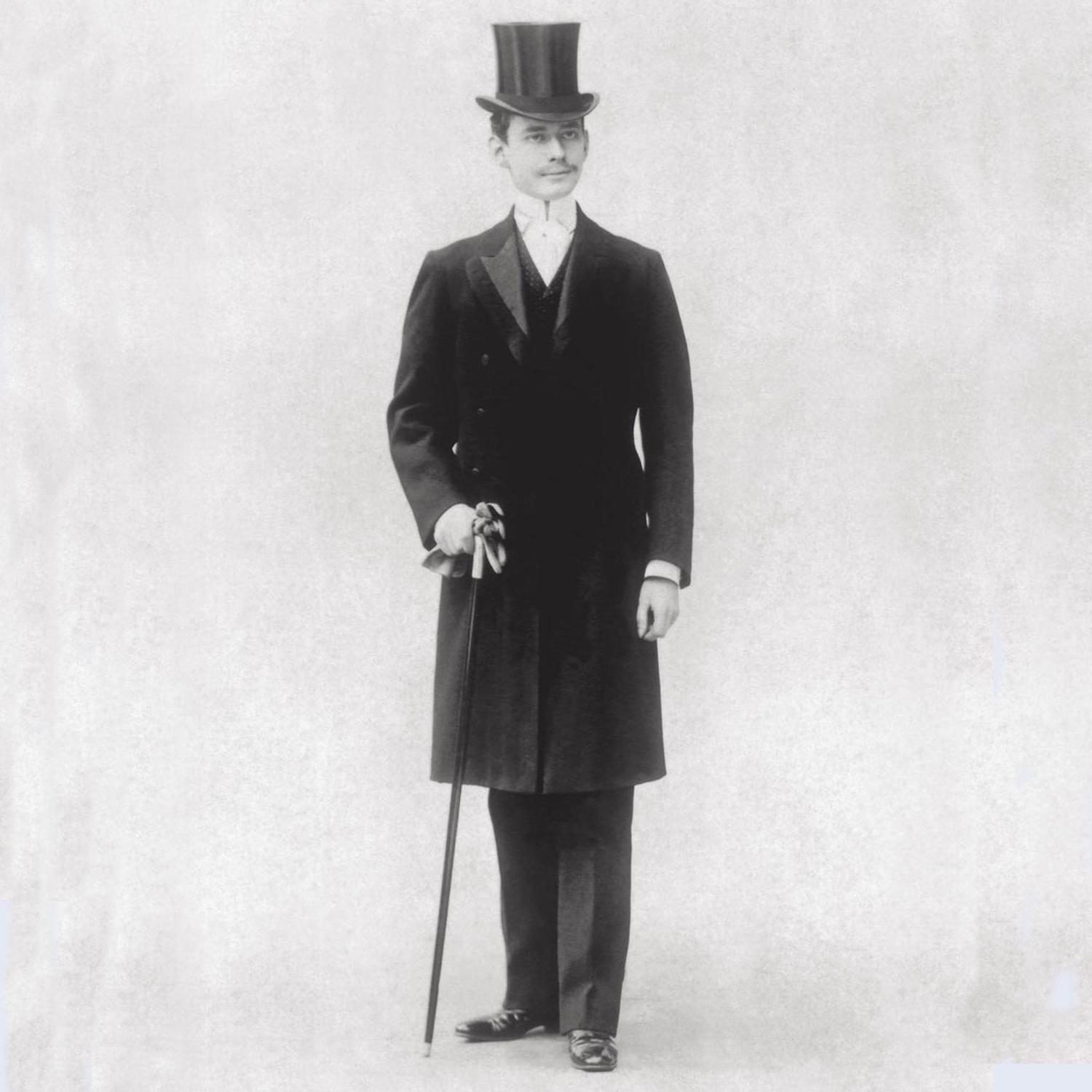 Louis Cartier in his early years

Critically, officers were expected to purchase their own wristwatches and so they often chose to continue to wear them even when they were back home on leave. As you might imagine, the sight of battle-hardened soldiers walking around wearing wristwatches (or wristlets as they were often called back then) went a long way towards dispelling the notion that they were fragile and effeminate. Before too long, wristwatches began to grow in popularity, with the trend only strengthening as more and more soldiers began to come home. In December 1917, the Horological Journal, the journal of the British Horological Institute, noted that; the wristlet watch was little used by the sterner sex before the war, but now is seen on the wrist of nearly every man in uniform and of many men in civilian attire. The setting could not have been better for Louis Cartier to unveil his latest creation; the Tank Normale.

At first reading, the name Tank may seem a little strong for what is in a reality a very elegant design. Its distinctive aesthetic, however, was reportedly largely influenced by Louis Cartier’s fascination with the armoured Renault tanks, which were playing a key role in the trench warfare of World War I at the time. Practical, functional and yet completely radical, this top-secret weapon quickly became a key talking point among the masses when they first took to the battlefields in 1916.

Of particular interest to Mr. Cartier was the geometric form of the tank. When reduced to its most primitive elements and viewed from above, the design was essentially a circle (the turret), within a square (the main body of the tank), within a rectangle (the treads of the tank). Having already spent the early years of the 20th century earnestly researching ways to align the circle (of the hours) with the strap, a clear idea was now starting to take shape in his mind: four lines, with two parallel shafts, which would allow for the seamless integration of the strap as a fluid extension of the case. 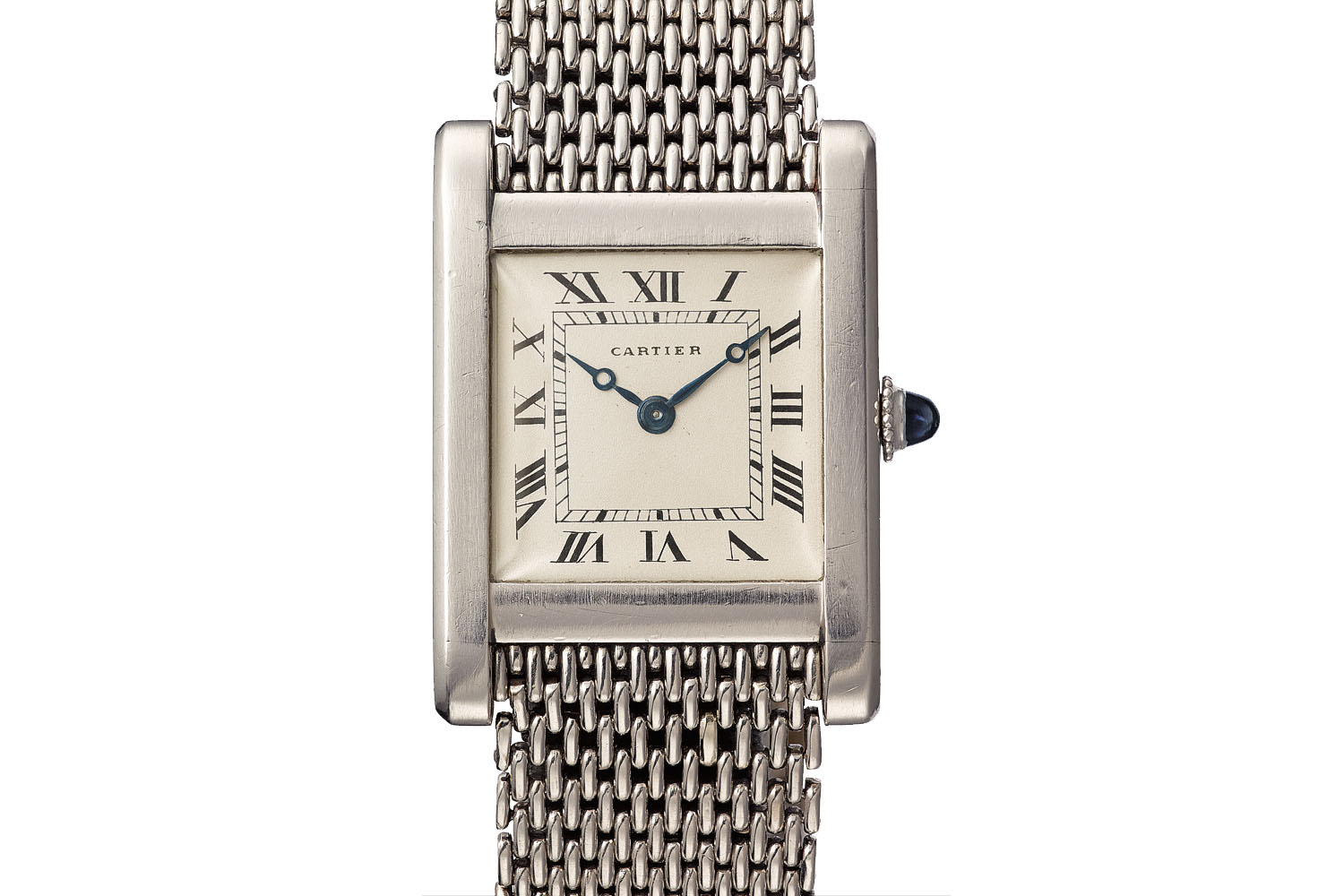 It was a revolutionary concept. Up until that time, men’s wrist watches mostly featured crude looking wire lugs that were welded to the case to enable a strap to be attached, and of course, they were round. Furthermore, a man’s wristwatch choices were still rather limited in 1917, with the market dominated by military-inspired models as well as the more lavish and excessively ornate pieces in the popular Art Noveau style of the time. Appropriate anecdote: the first ever Cartier Tank was offered to General John Pershing before the model went into production. 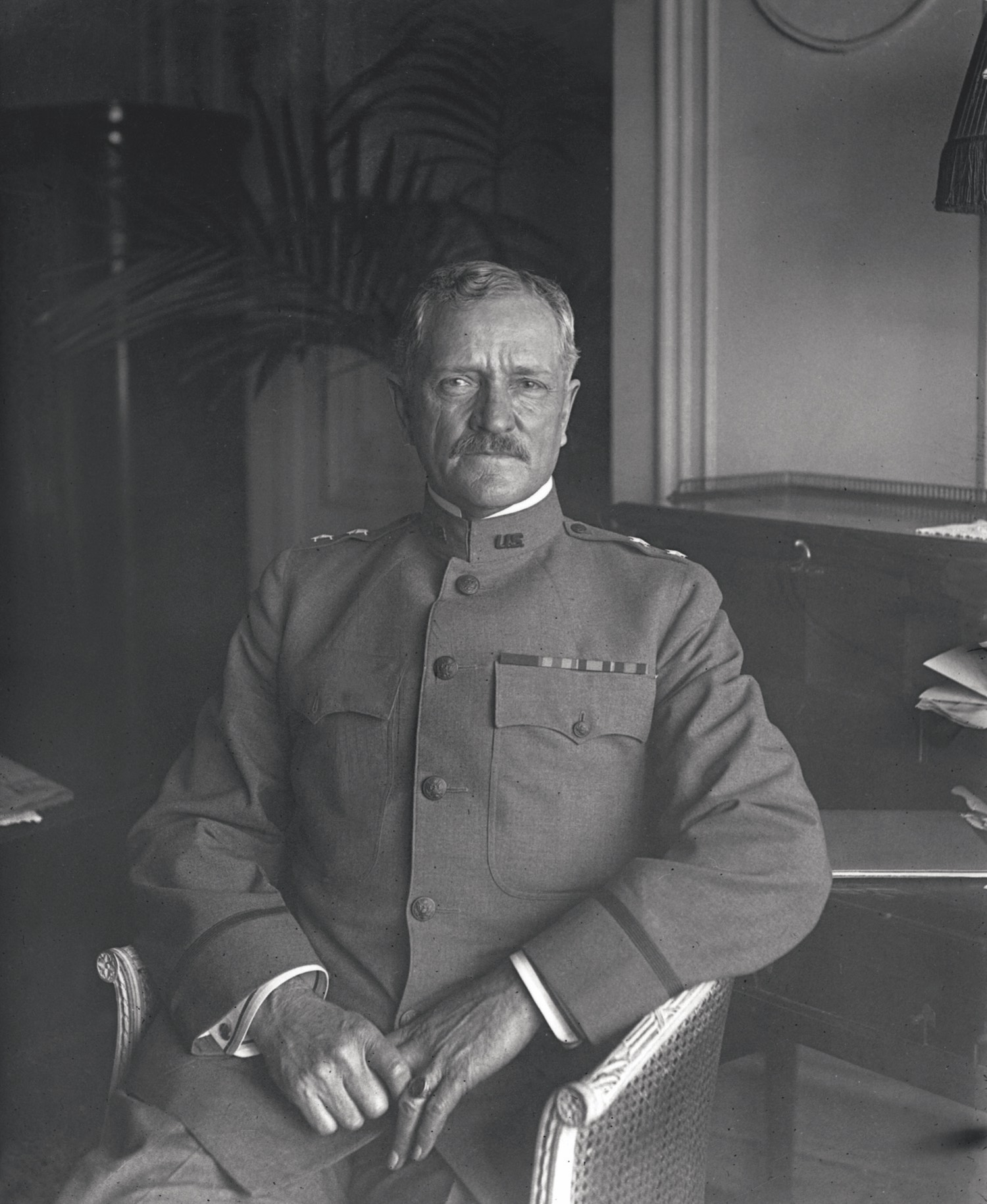 General John Pershing, one of the very first owners of the Cartier Tank

The Tank offered something different, something progressive and yet refined. It was minimal in its design and yet very attractive on the wrist, marking the wearer as someone of taste and sophistication yet still resolutely masculine. Presented in a 23 mm x 30 mm platinum case, with elongated polished flanks, it featured the same Roman numerals we know and love today, the railway track minute counter, the blued-hands and of course a winding crown set with a blue sapphire cabochon. It also featured a gorgeous leather strap that incorporated an ergonomic folding buckle, designed by Edmond Jaeger – more on him in a minute – that further enhanced the visual appeal of the seamless integration of the strap into the case. Plus, it ensured that the watch fit securely on the wrist.

As talented a designer as Mr. Cartier was, however, he was not a watchmaker. Cartier was a jeweller after all, and so when it came to put the Tank in production, they turned to a Paris-based watchmaker by the name of Edmond Jaeger (yes, that Jaeger). This was not by coincidence, however, as Cartier already had an established relationship with Mr. Jaeger that dated back some ten years. You see, years earlier, in 1903, Jaeger had challenged Swiss manufacturers to develop and produce the ultra-thin movements that he had invented. In 1907, a Swiss watchmaker by the name of Jacques-David LeCoultre, grandson of Antoine LeCoultre, and the head of production at LeCoultre & Cie., accepted the challenge, which eventually lead to the creation of Jaeger-LeCoultre (but that’s a story for another day). 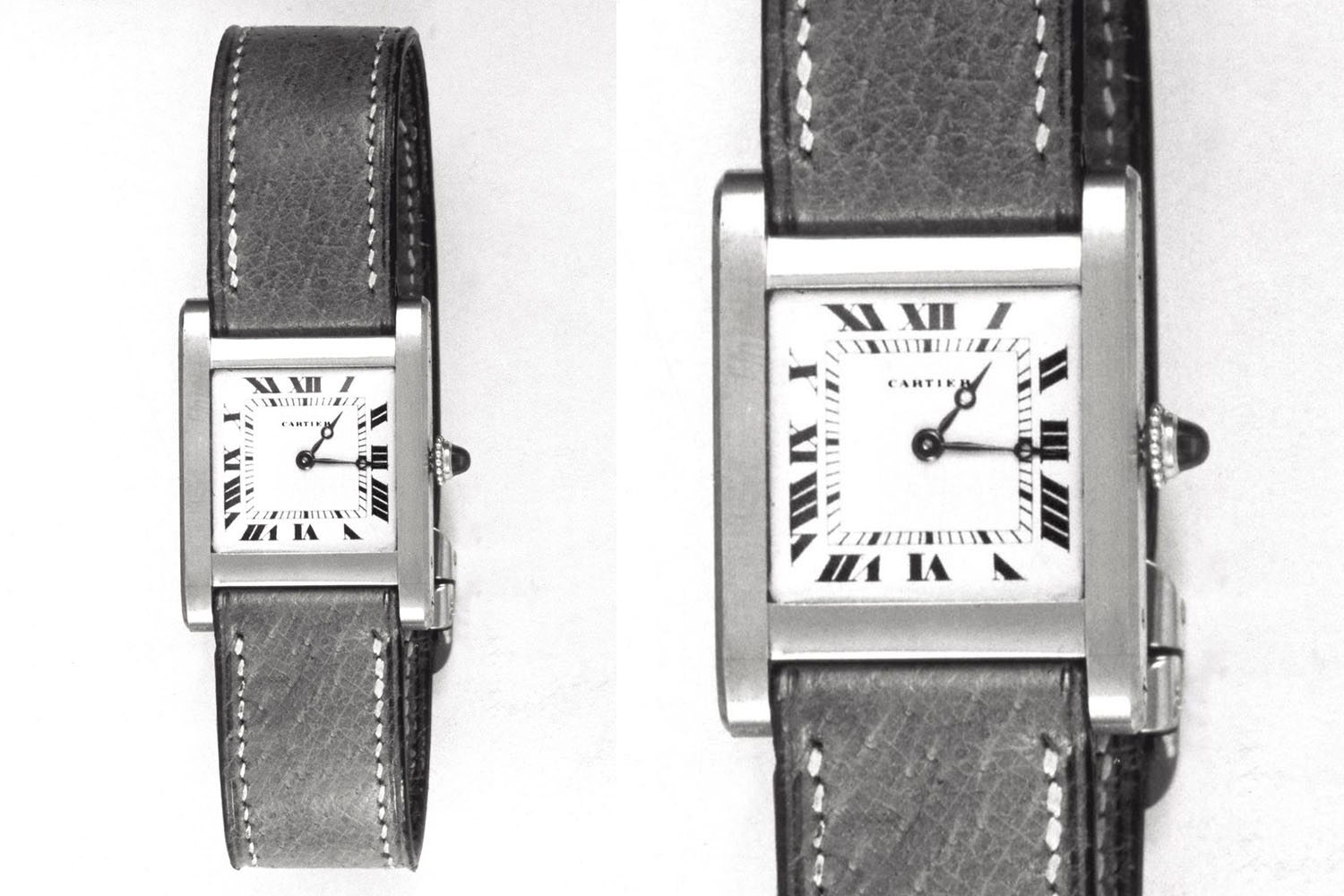 It was in this same year (1907) that Cartier signed a contract with Mr. Jaeger, which stated that all Jaeger movements for a period of fifteen years would be exclusive to Cartier. The movements were produced for Mr. Jaeger by none other than LeCoultre, of course. Inside the men’s version of the Tank Normale was a manual-winding, mechanical movement, capable of displaying the time only.

Although the Tank Normale was never produced in large numbers, it was revolutionary in its day and paved the way for the numerous Tank models that would follow (which we will cover in Part. 2 of our in-depth series on the history of the Cartier Tank). Surprisingly though, it has never appeared in Cartier’s legendary Collection Privée Cartier Paris collection (CPCP for short), which is rather remarkable because pretty much all the important models have been re-launched in this collection at some point. Perhaps this makes them even more attractive from a collector’s point of view, as vintage models – especially in platinum or white gold – are quite difficult to come by and always command a premium at auction. 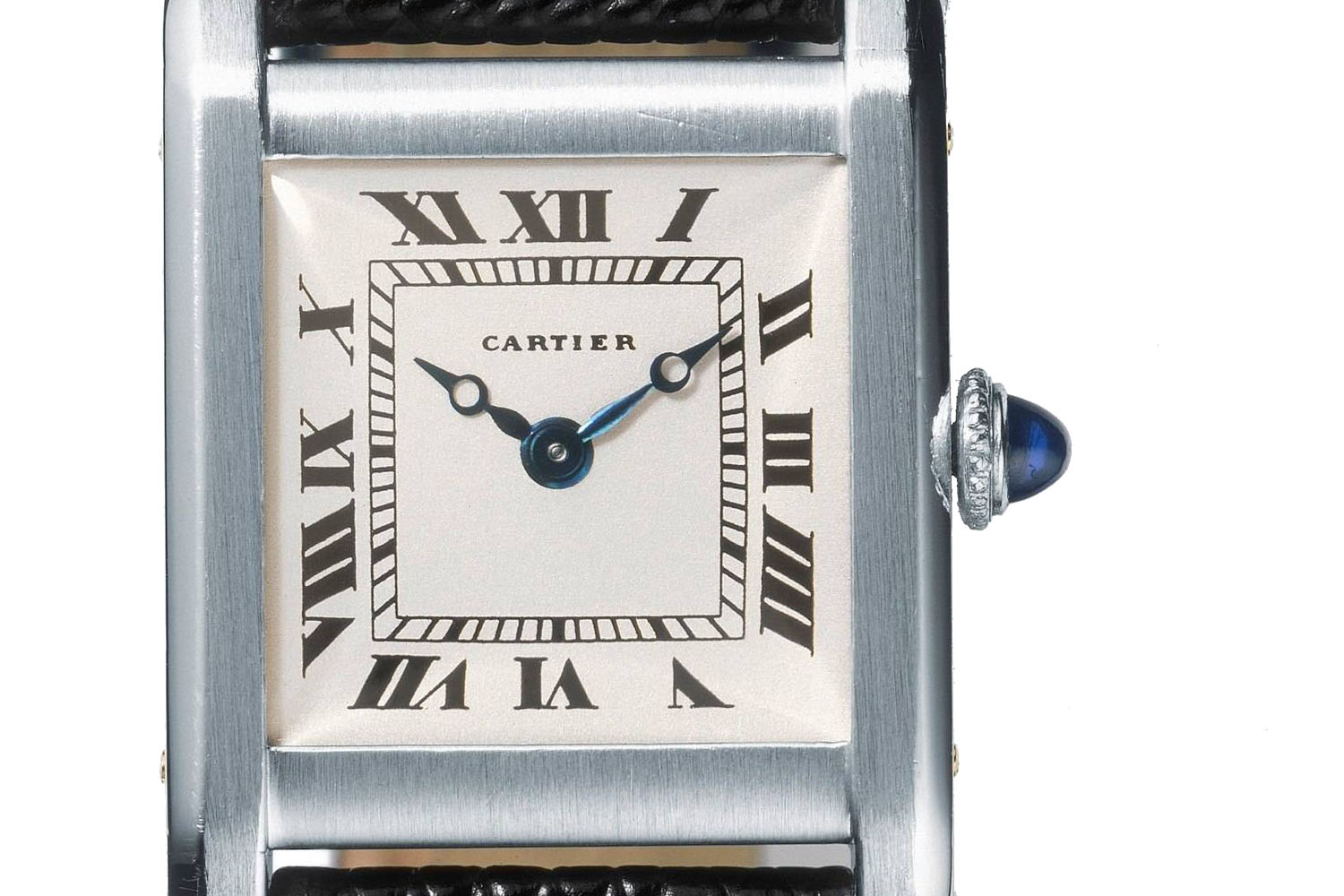 What is perhaps most remarkable however, is that even now, 100 years on, the Tank Normale still looks chic and sophisticated. Arguably it’s a bit on the small side for the modern gentleman’s tastes but at the same time, you wouldn’t be out of place wearing one on your wrist at a black-tie dinner either. And that’s what makes an icon an icon. 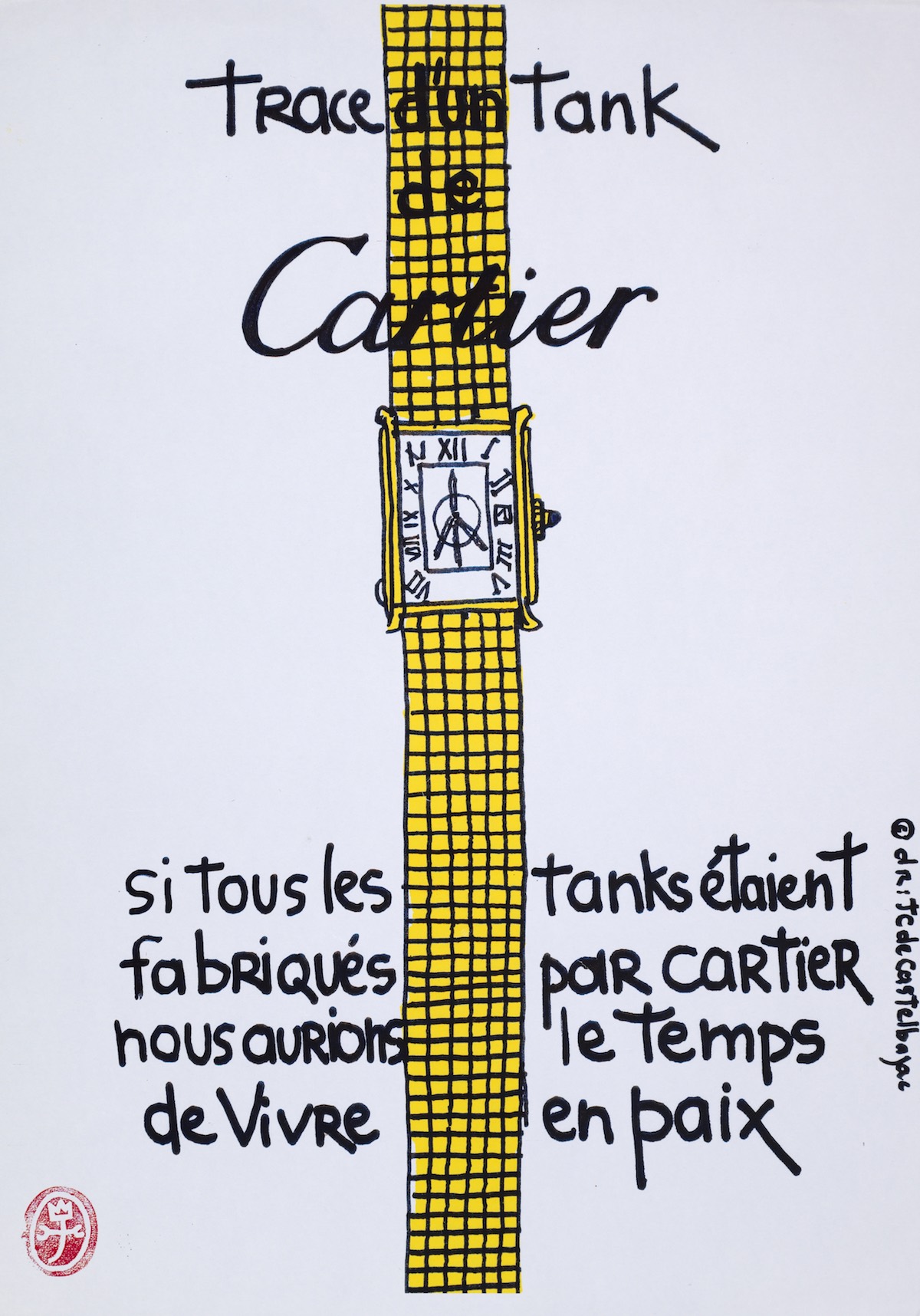 A perfect example of the strange military/luxury mix behind the Cartier Tank – A modern advertising designed by JC de Castelbajac (“if all tanks were produced by Cartier, we would have the time to live in peace”)

MONOCHROME Watcheshttps://monochrome-watches.com/
This post first appeared on MONOCHROME Watches - An online magazine dedicated to fine watches.
Vorheriger ArtikelNews – GPHG 2017 Finalists Announced – Plus Our Analysis and Predictions
Nächster ArtikelFormex is Back with Bold Watches and Direct-To-Customer Model