Carl F. Bucherer has already proved that it has the capacity to develop impressive modern technical solutions. For instance, it is one of the rare manufactures to rely on the concept of a peripheral rotor for its automatic winding system. Using this as a base for further developments, Carl F. Bucherer introduces the Manero Tourbillon Double Peripheral with a new in-house calibre CFB T3000, a world first that combines a peripheral automatic winding system and a peripherally mounted tourbillon that appears to float in thin air.

For its latest creation, Carl F. Bucherer combines classical design with innovative technical solutions. At Baselworld 2018, the Lucerne-based brand introduced a new in-house movement. The fruit of several years of development, the new movement is based on its signature peripheral automatic winding system – a technical solution that is found in various Manero watches. Yet here, it is combined with another complication: a tourbillon… Not any kind of tourbillon though, but a brand new type of regulating organ, with an unprecedented architecture. 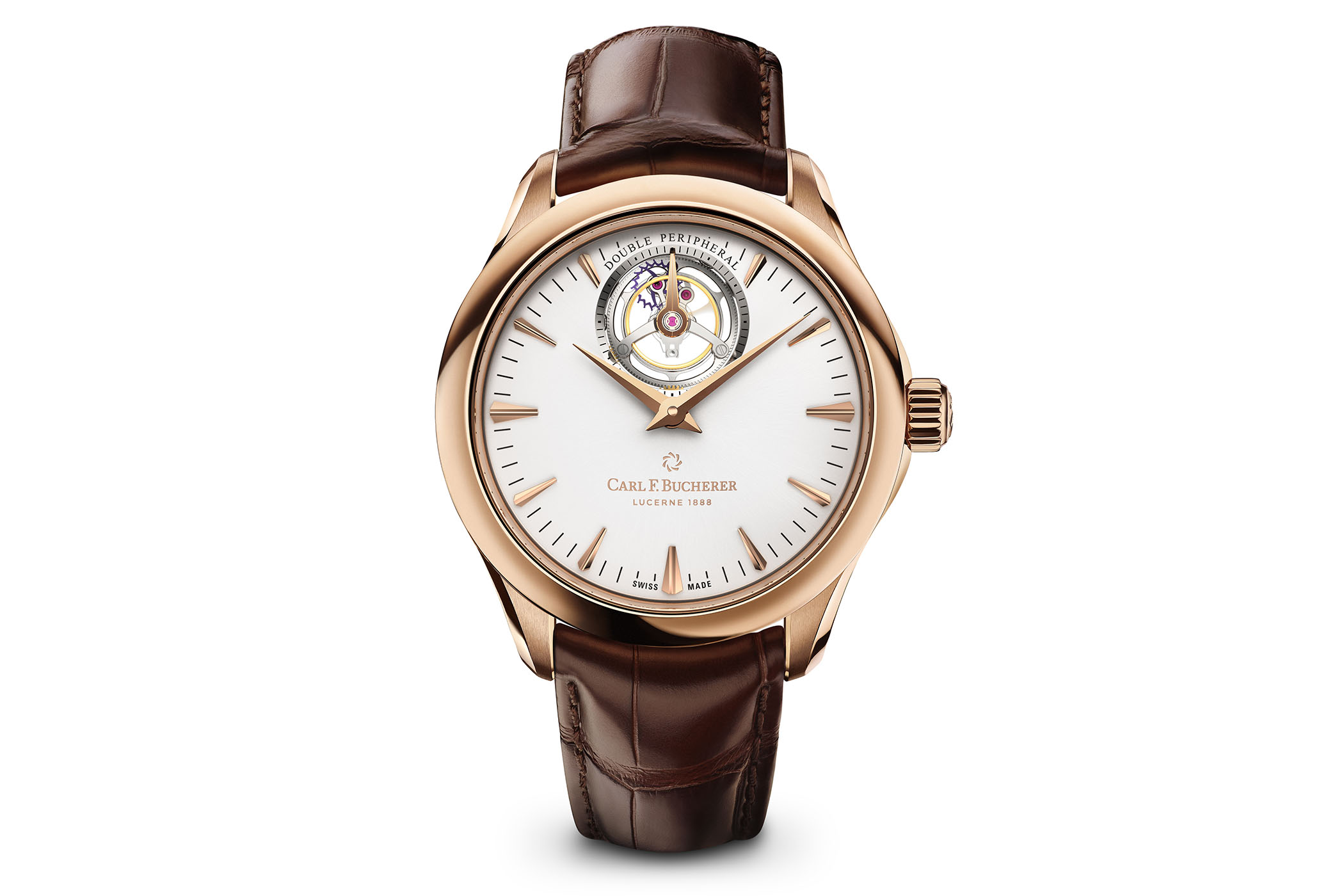 Basically, a tourbillon involves a specific type of architecture where the balance, the balance-spring and the escapement are placed in a continuously rotating cage to counteract the negative effects of gravity on the regulating organ. Until now, the tourbillon could be a classical one, attached to the movement on both sides (one bridge on top, one bridge underneath), or a flying one, cantilevered from one side only with usually just one bridge on the movement side). Carl F. Bucherer’s new in-house calibre CFB T3000 features a tourbillon that has no bridges… at all! 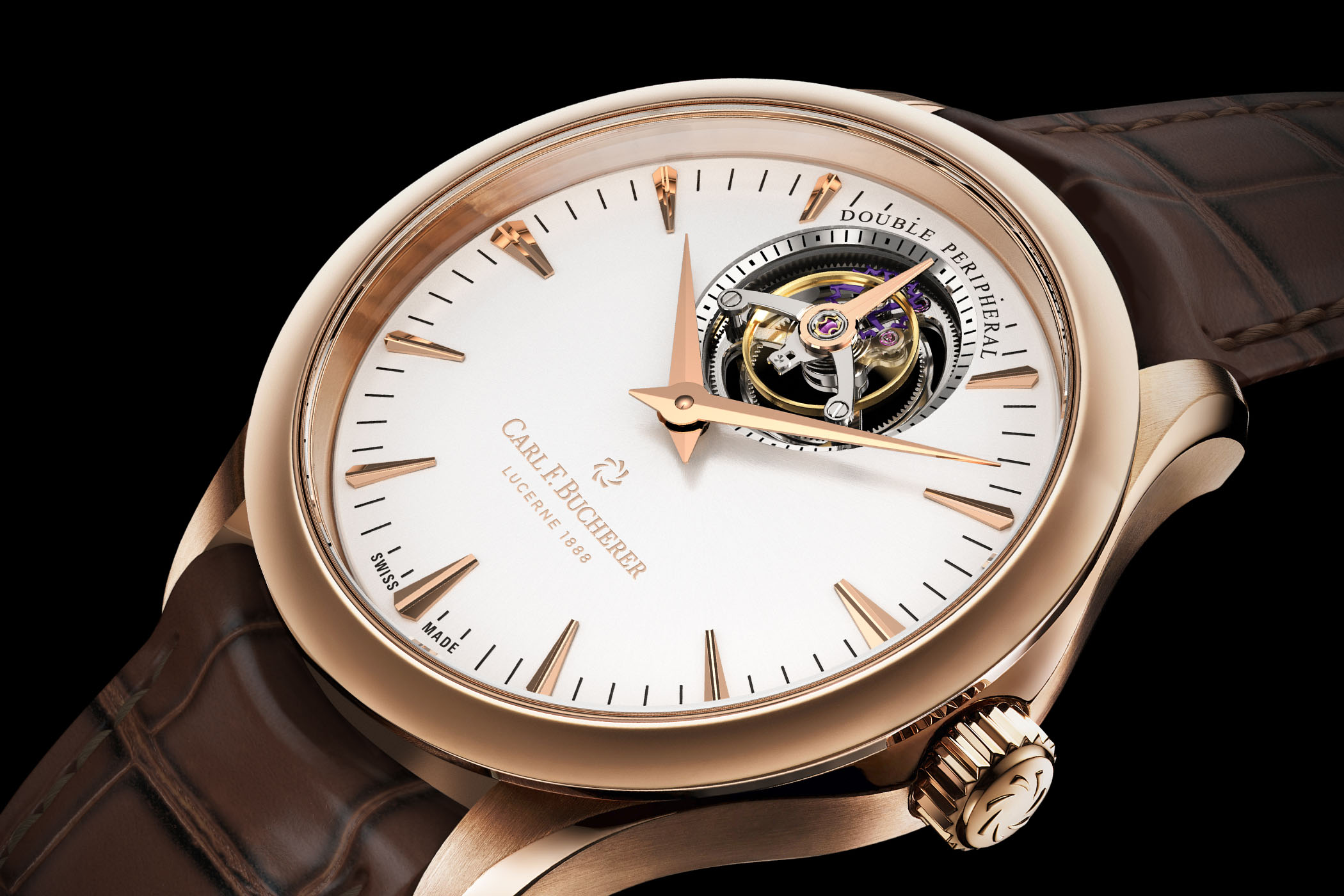 On the Carl F. Bucherer Manero Tourbillon Double Peripheral, the tourbillon is mounted peripherally and appears to float inside the watch – if you look closely, you’ll see that there are no bridges to hold the tourbillon in place. For a tourbillon to rotate around its own axis, it must be mounted accordingly, which is possible thanks to a ruby bearing in the watch’s main plate and another one in the balance-wheel bridge (or only mounted to the main plate for a flying tourbillon). Here, the tourbillon cage is actually supported peripherally by three ceramic ball bearings, which ensure a stable connection, precise guidance, and smooth running. Invisibly suspended in space, the view of the ballet of the regulating organ is unobstructed. 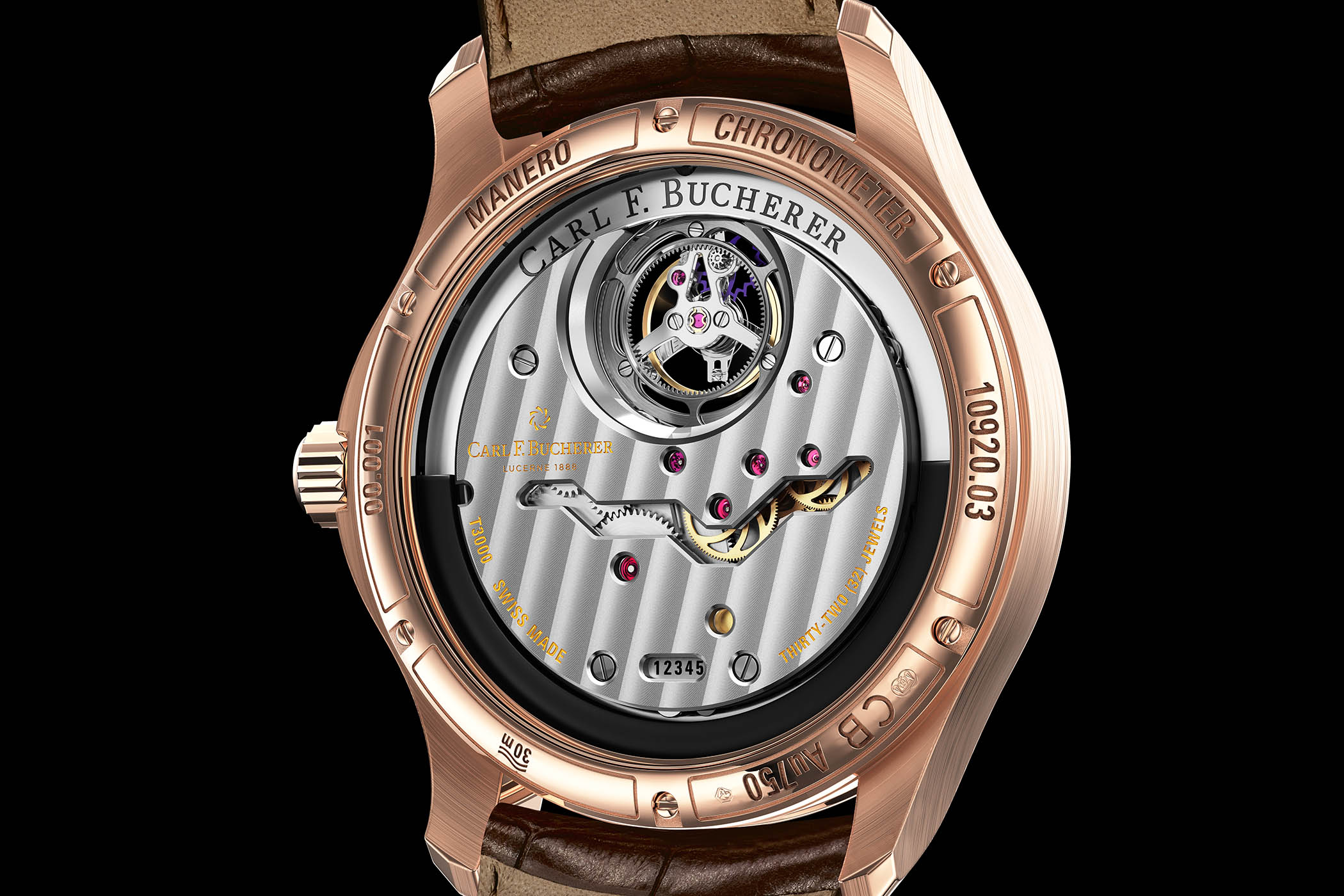 This new type of tourbillon is not the only technical feat found in calibre CFB T3000. The pallet and escape wheel are made from silicon, avoiding the need for lubrication, which increases the power reserve to at least 65 hours and protects it from the negative impact of magnetic fields. This allows the movement to meet the requirements of the chronometer norm. Finally, the automatic winding system is provided by a peripheral rotor, which revolves around the movement – the peripheral rotor has the advantage or reducing the thickness, leaving a clear view on the bridges, and offers more winding efficiency than a micro-rotor. 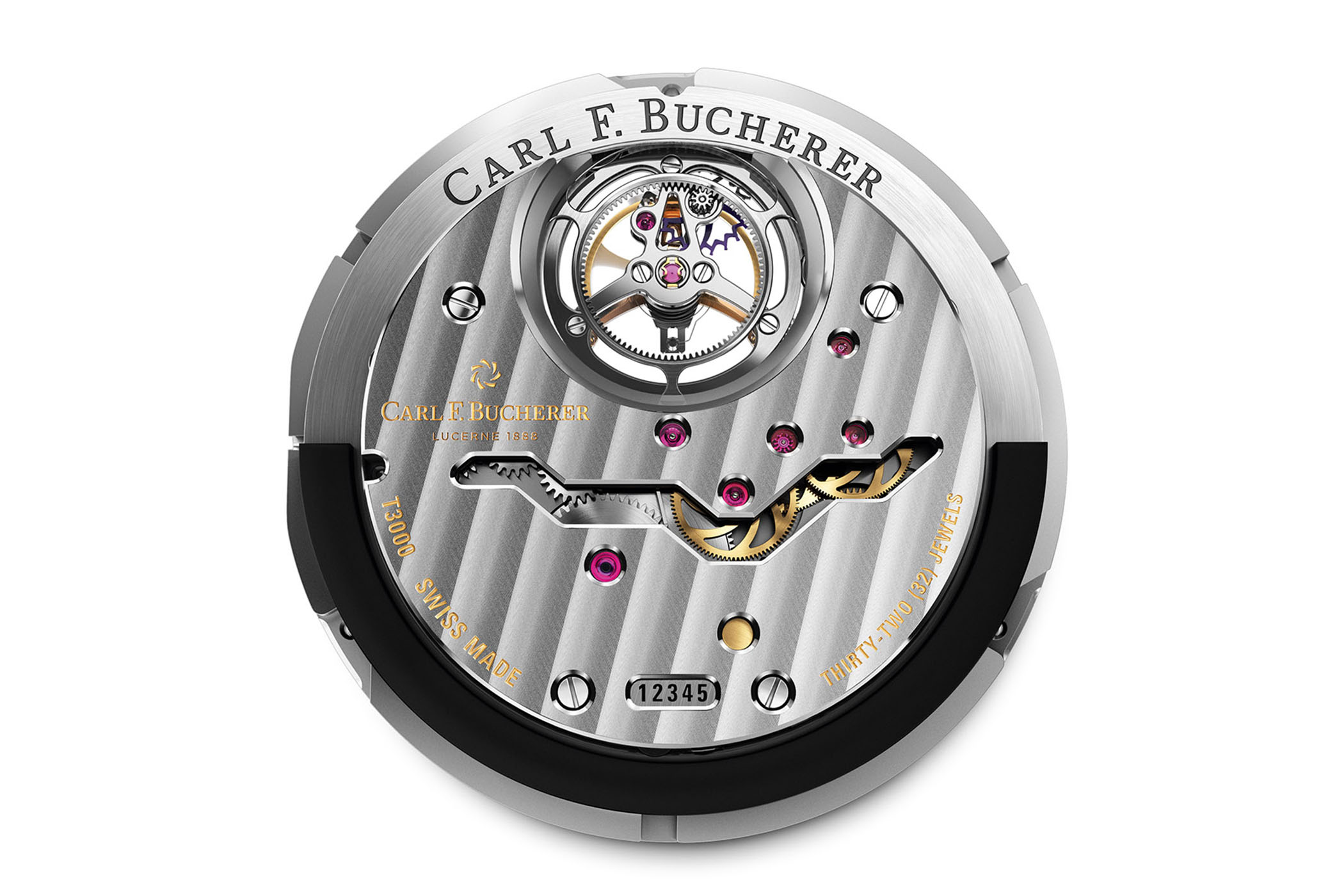 The movement itself is presented in a combination of both classical decoration – Geneva stripes and polished bevelled angles – and modern touches, such as the graphic openings on the main bridge or the blackened rotor – a signature style for Carl F. Bucherer watches.

While this Manero Tourbillon Double Peripheral might be technically advanced, it remains a classical watch, with an elegant presence. The 43.10mm case remains relatively thin, at 11.57mm, and is made of 18K pink gold, with brushed and polished surfaces – the shape of the case is the same as other Manero watches. This elegant look is complemented by a silver-coloured dial with pink gold appliques and hands. 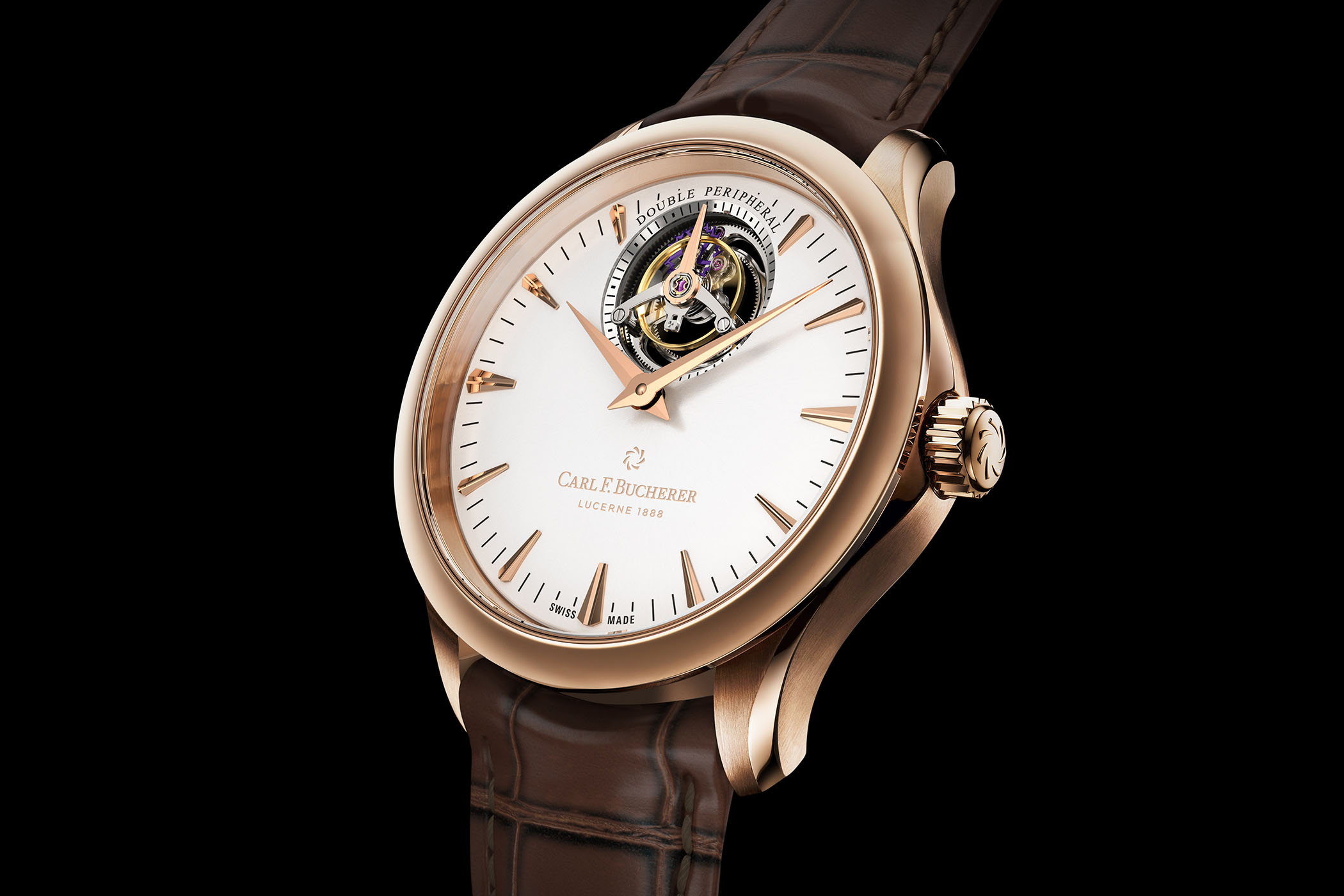 The availability and price of this new Carl F. Bucherer Manero Tourbillon Double Peripheral are not confirmed yet. More details on www.carl-f-bucherer.com.