As some of you might know, A Collected Man is an online platform dedicated to curating and selling some of the most desirable watches on hand. Based in London, ACM and its founder Silas Walton have gained an impressive reputation among the collecting community, offering a selection of rare watches from high-end brands as well as superb pieces made by independent watchmakers – remember the Philippe Dufour Grande et Petite Sonnerie Wristwatch sold for a record-breaking $7.63 million…? That was ACM. Now, the online platform specialized in high-end watches announces its third auction, with a short but beautifully curated selection of timepieces, including a rare Santos-Dumont limited edition, a stunning Daniel Roth Monopusher or a steel Frank Muller prototype…

This online auction of neo-vintage watches by A Collected Man will start today, June 22, 2022, at 2PM London Time and will run until June 29, 2022. The watches are offered with a starting bid (from GBP 5,000 to GPB 20,000, depending on the watch). The catalogue can be consulted here.

With the current rise in the collectability of some special watches from Cartier, specifically the CPCP collection or Crash models, it is no surprise to see a watch from the French maker of luxury goods appearing in A Collected Man’s selection. And, it truly is a superb watch to start this selection. Released in 1994, this Cartier Santos-Dumont limited edition marked the 90th anniversary of the model. The 90th-anniversary model was limited to 90 pieces, with all the watches being individually numbered on the brushed caseback. The present model combines the original design of the Santos with a platinum case and a warm, salmon-coloured dial – a combination that always appeal to the collecting community and that is rarely seen at Cartier. The dial features typical Cartier hallmarks, such as black Roman numerals, a sapphire cabochon set in the crown, and blued Breguet-style hands. Powered by a hand-wound Frederic Piguet calibre 21, and measuring 27mm, this stunning and well-preserved 1994 example is offered for sale “full set” and in unpolished condition. More details here.

The beauty, importance and thus popularity of watches made by Daniel Roth (specifically those made during the time Roth himself was involved in the company) is a topic that we’ve extensively explained here. The watch you see here, one of the earliest models produced by Daniel Roth after establishing his eponymous brand, is part of the most collectable and desirable pieces and ranks high on the list of grail watches. Made in 1991, this watch is part of a limited run of 36 pieces in yellow gold and 16 in platinum. Using Lemania 2220 movements from the 1930s, and refinishing them to his usual (high) standards, Roth created this watch with all his signature hallmarks. 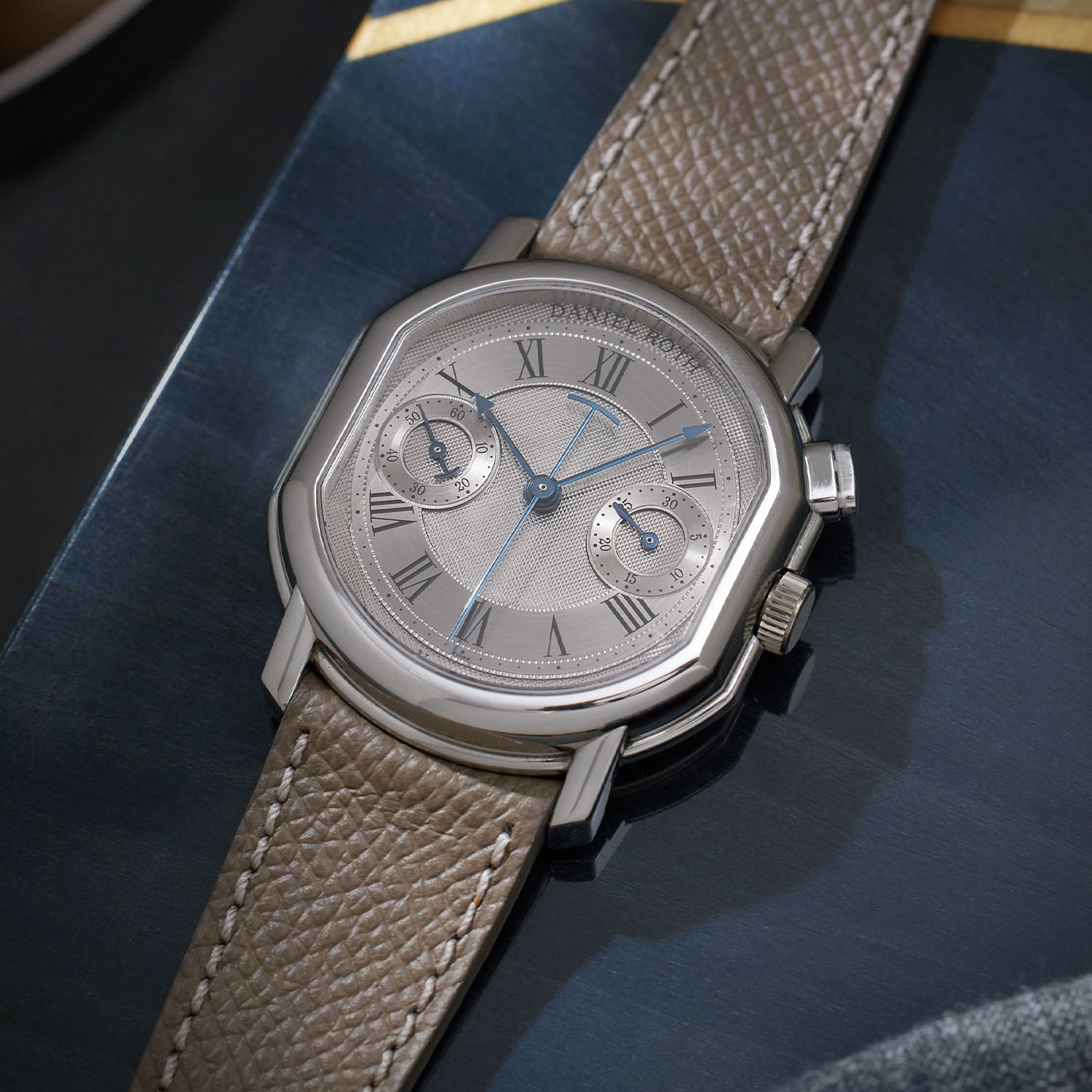 Inside the double-ellipse platinum case are a handsome movement and a beautiful dial in a restrained shade of grey gold, with clous de Paris guilloché and blued hands. This watch is part of the first batch of 16 platinum Monopushers and is offered in very good condition overall. More details here.

Frank Muller is today known for its tonneau-shaped watches and flamboyant designs, but it wasn’t the case at the beginning. In the early days of the brand, Franck Muller was known for producing several stainless-steel chronographs, with a vintage-inspired aesthetic – something that was shared with early Roger Dubuis watches. The present watch is particularly special since it is a prototype (as engraved on the back), which is assumed to have served as a testing piece for design evolution. The pared-back, streamlined layout of the dial is typical of many of Muller’s earlier watches and is here rendered in silver, with a two-register layout and oversized Breguet numerals. 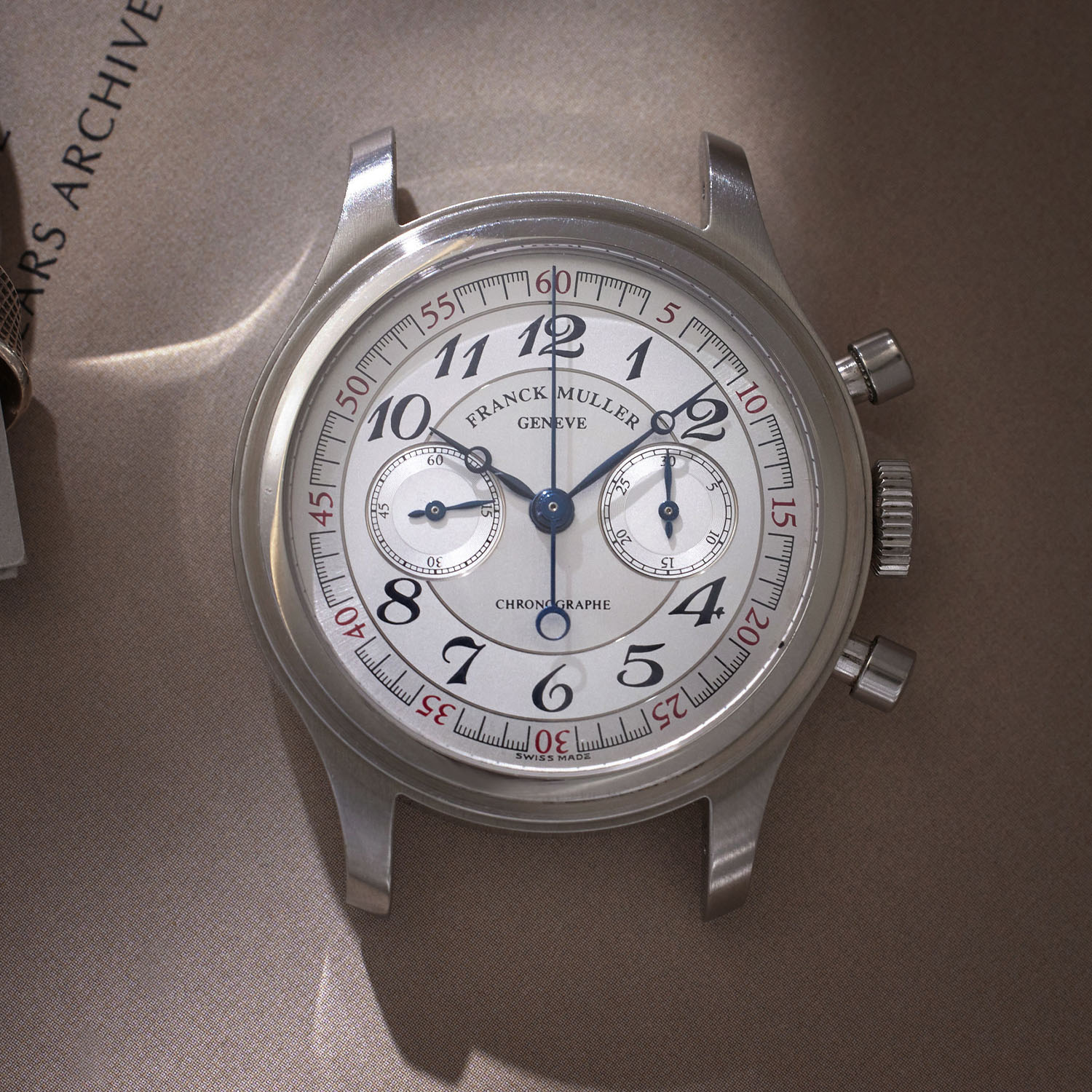 The steel case has a classic 1930s design, with its polished, stepped concave bezel and contrasting brushed outer portion. It measures a compact 36mm and houses a hand-wound chronograph movement. In addition to the prototype marking on the caseback, A Collected Man indicates that the watch is in very good condition overall. More details here.

Before we’ve seen the rise of independent watchmakers and original displays of the time, an important watch needs to be mentioned, the Audemars Piguet Star Wheel. Making use of a wandering-hours function, it displays the time via three sapphire disks with printed hours, which rotate on a centre pivot, where usually the hour and minute hands are attached. The name of the watch is derived from the star-shaped wheels which connect the sapphire disks to this rotating centre ring. The hours on the disks point to the minutes on a 120-degree sector, gliding over them over the course of an hour. The rotating ring turns 360 degrees (one full turn) in 3 hours. While not quite a jump-hour watch, the Star Wheel has a satisfying mechanical feature: the sapphire disks jump into position right before sliding over the minutes track. 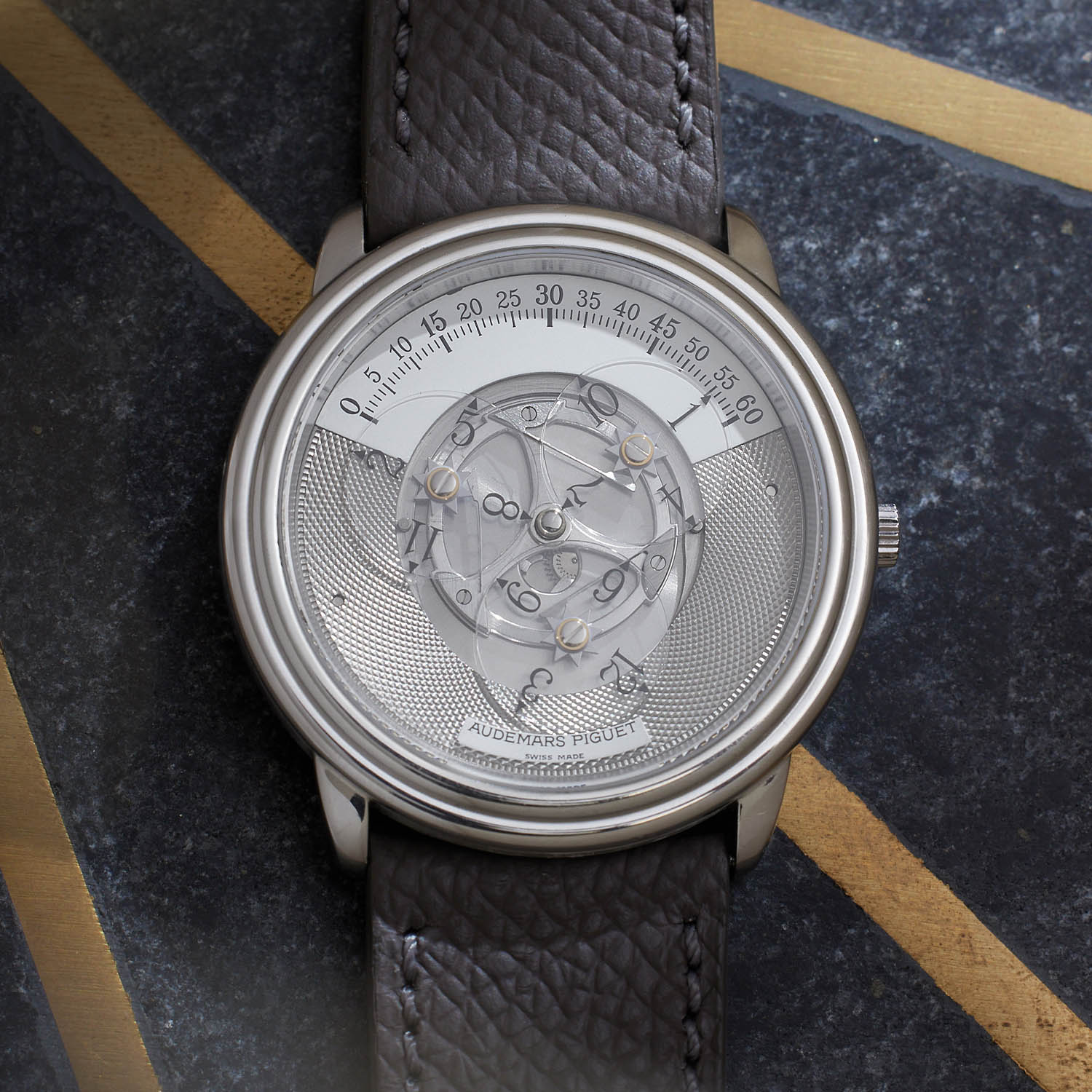 Often seen in yellow gold, this platinum variant stands out for its sleek look and rarity. The combination of colour, with a platinum case blending with the white gold guilloche of the dial tones down this unconventional design, yet enhances the interplay of textures. This example of the Star Wheel, reference 25720PT, was produced in 1996 and comes with its original box, and is in very good condition overall. More details here.

last but not least, another highly original watch by a long-established watchmaker, the Mercator by Vacheron. Combining twin retrograde hands in the form of a compass, the Vacheron Constantin Mercator 43050 was released in 1994, to mark the 400th anniversary of the death of geographer and cartographer Gerardus Mercator. Over the 10-year lifespan of the model, it is understood that only 638 pieces left the manufacture, making it a rare and exclusive model. It is mostly noticeable for its mix of a classic case with an unconventional dial and display of the time. It must be said that not only the position of the hands is original, but also their motion, since the watch is both a jumping-hour and a bi-retrograde. 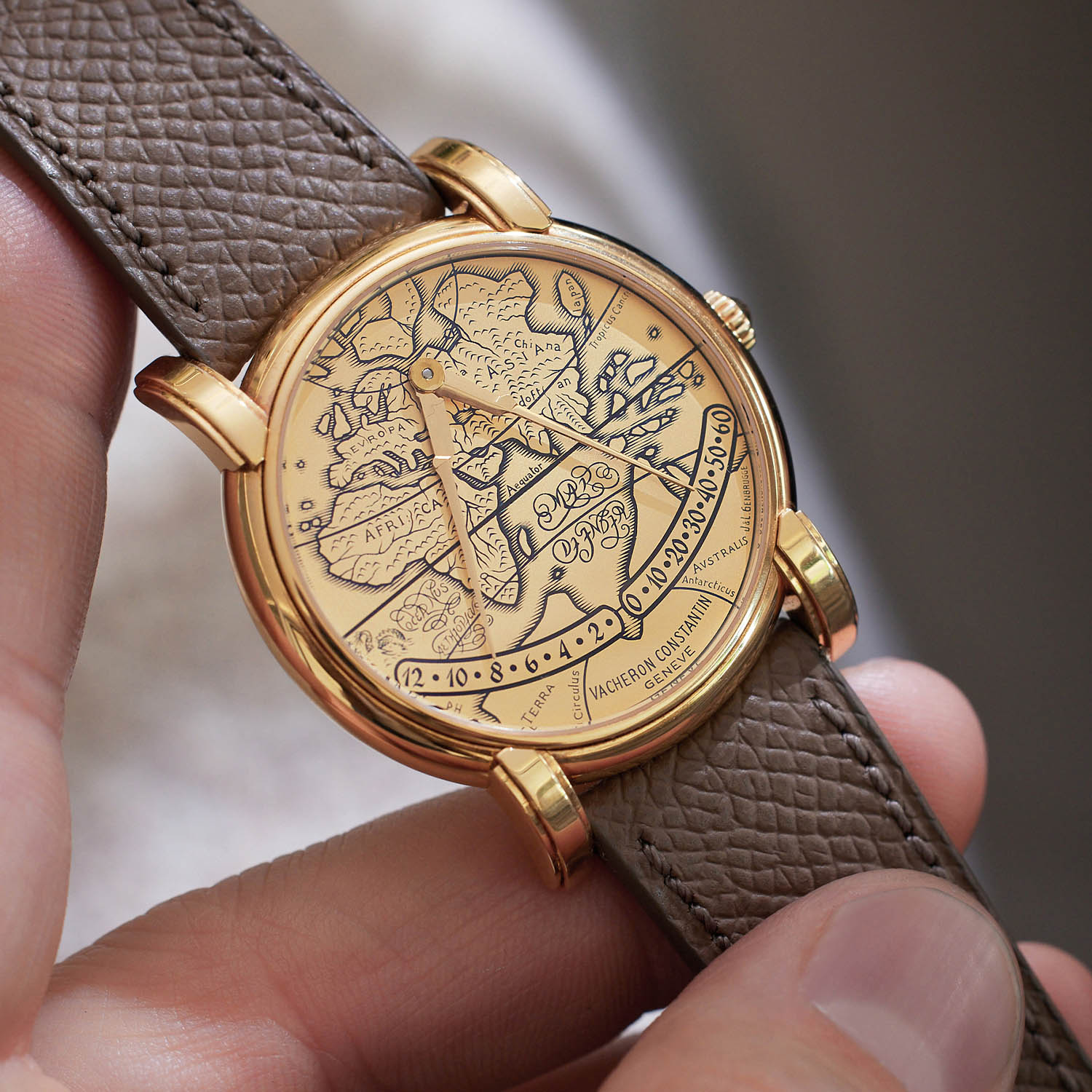 Made from solid gold, the dial features a map of Europe, Africa, and Asia, which was first drawn by Mercator himself in the 16th century. The dial is engraved with the shape of the different continents, and then carefully filled out with black enamel. The 36mm yellow-gold case features a stepped bezel and straight lugs. It is offered as a watch only, in very good condition overall. More details here.